I went today to buy a few japanese barberry bushes for an area next to my house. I noticed the Nusery had an assortment of small 2-3ft bushes labeled Brazzleberry. They advertised it as an edible alternative to boxwood and barberry. They had varieties labeled Jelly Bean, Peach Sorbet, Glaze, and some raspberry variety that the name escapes me.

Anyone familiar with these? Are they easy to grow? Since ai was going to plant barberries I wasn’t expecting fruit so if these brazzleberry plants are similarly sized and ornamental and also produce fruit maybe they would be a better option. They were a little expensive but priced similarly to a comparable size boxwood.

They have been out for a few years.I’ve stayed away from them because of the price.I’m not sure if they’re Northern or Southern and appear to be dwarfing. Brady

Now you’ve piqued my curiosity. So, just what IS a brazzleberry? The name and cultivars sound like they were made to stimulate sales, but doesn’t necessarily describe the plant, its habits, or the fruit. Does anyone have any experience with them? They SOUND delicious.

Looks like blueberries except for the one called “Raspberry Shortcake” which is a … Raspberry.

I don’t have any experience with them. I have read accounts the raspberry is nothing special. The blueberries though I heard are decent, pretty, need the acidic environment all blueberries need. Best buy two. probably a half-high-NHB hybrid. Raintree is selling them for 20 bucks, so price has come down. They may be out for the season.

I bought 2 of them. A Peach Sorbet and a blueberry Glaze. They cost me $23 at my local nursery. The lady at the nursery said she has all three blueberry versions at home (jelly bean being the other). She said the Glaze was very good and the Sorbet was her favorite. The interesting thing about the Sorbet is that it doesn’t always lose its leaves over the winter. She said the Sorbet has 3-4 distinct colors depending on season. They do not need a polinator. I planted mine next to a small burgundy barberry. I mulched around all 3 bushes with pine bark nuggets and it looks like hell. Thats the first time I ever used pine nuggets and it will be the last. In fact, the more I look at it the more it turns my stomach. I’ll probably pull the pine bark nuggets back out and replace it with hardwood bark mulch. Since these bushes are near my house and patio I would like it to offer a bit more curb appeal.

Here are the tags 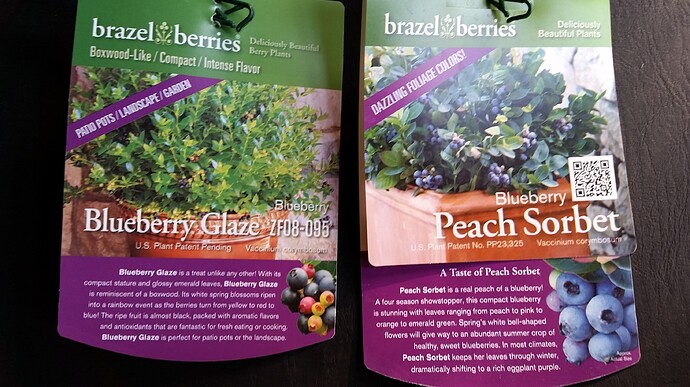 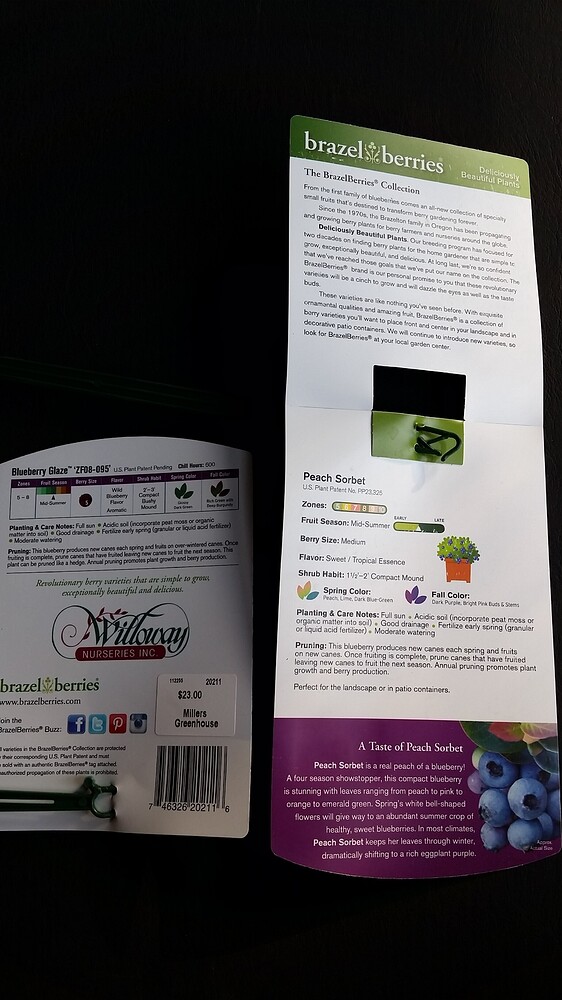 Thank you. Now I get it. It’s more like a brand name for some varieties of berries.

I have 2 of the blues (I didnt protect them, one died) I also have the raspberry (had 3) bought all during the sale. 2 of the raspberries died 2 winters ago. Last winter I protected the surviving raspberry. It is doing and looking great. I am hoping to get some raspberries this yr. 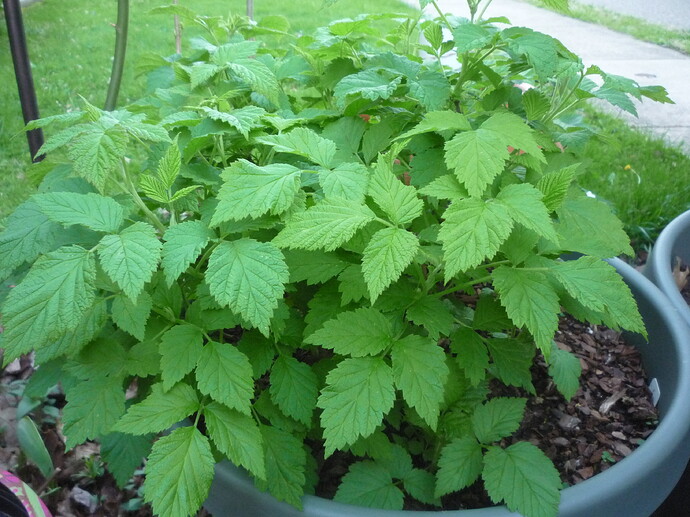 It is! What’s your care regimen for that raspberry?

When I got pot from overwintering, I scratched in some Miracle grow Organic all purpose plant food. Then I sprinkle a layer of Foxfarm Happy Frog soil conditioner on top of the soil. This is the 1st time it has done so well. When I checked yesterday, some have flower buds

It will be my first time tasting it. This cultivar sends up runners/shoots from the bottom. I think I will have to divide this fall as the runners/shoots are coming up fast and will crowd up the pot. Will post a picture later.

Sounds good; I wonder what the issue of adding the pine bark was with the other trees? Did the soil retain too much or too little moisture for example.

I have used Miracle Gro in the past myself with good results; I assume yours was slow release/pellets? And flower buds are exciting! I’ve not yet had a plant that divides at the roots so I envy you. I do like the nature of raspberries though, was thinking about getting a Mysore Raspberry the other day…

Yes, I think my mix was too wet. Each spring when I removed the dead tree the dirt is soggy. They dont start of dead, they actually try to leaf out and then have this “sudden death” Last year I have overwinter some potted plants differently. I 1st make sure they are watered, then put newspaper inside pots and tape the newspaper to the pot to keep the dirt in. then I lay the pots on their sides and cover with this frost fabric I got from Park seed, It actually work very well. That was how I over winter my Brazel raspberry. 2 yrs ago I just left them unprotected and they died. One of my blackberry I didnt protect that died too and it was a beautiful specimen ready to fruit this yr

I think it maybe Heaven Can Wait blackberry or Glencoe, not sure which I lost label) The one that is alive again is either Glencoe or Heaven can wait survived with protection and doing great, no flowers yet. I will know which one died once I get fruits this yr.

Here is a picture of Brazel rasp, not a great pic as my camera has an intermittant focus problem 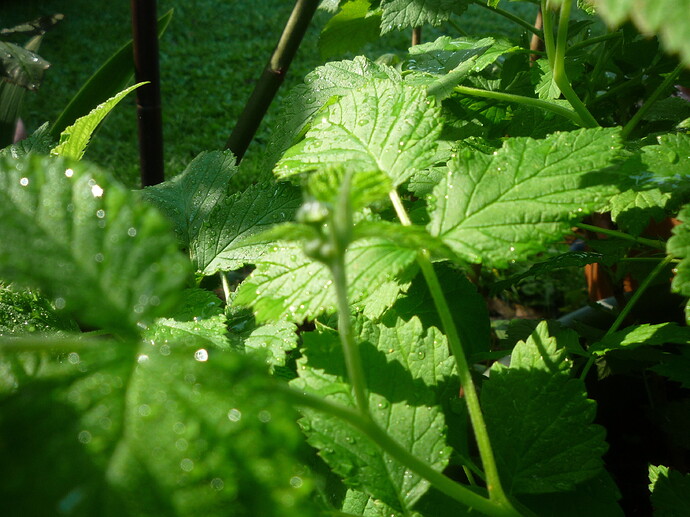 Here is a pic of the runners/new shoots 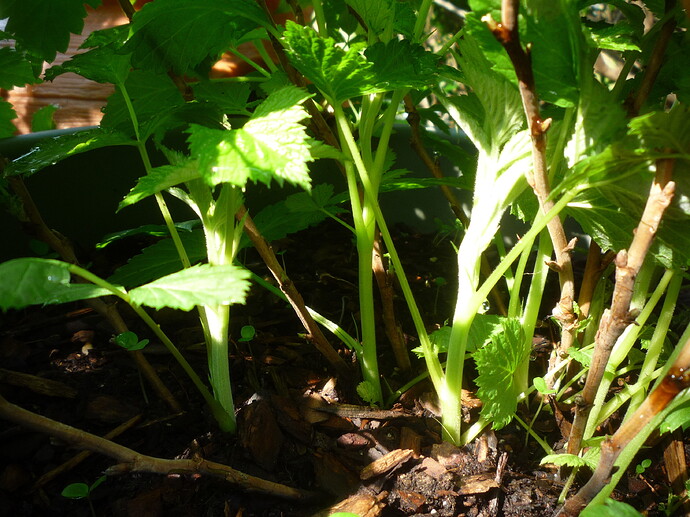 Here is a picture of Kiwi Gold (bought it this spring, tissue culture, 1yr and I am amazed that I got fruits from this small twig) 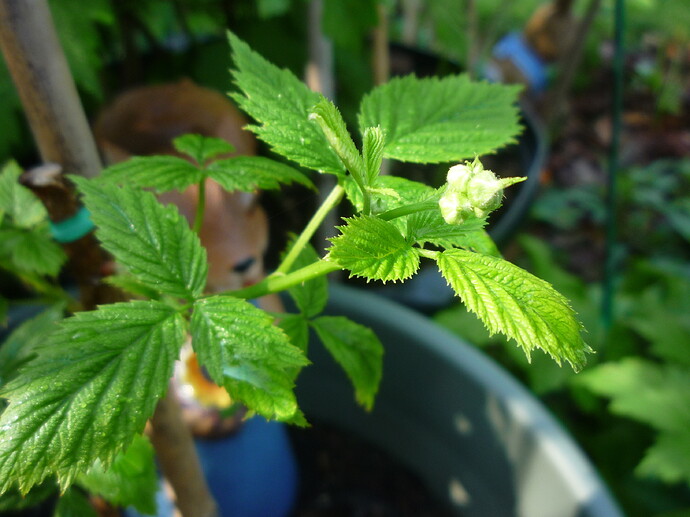 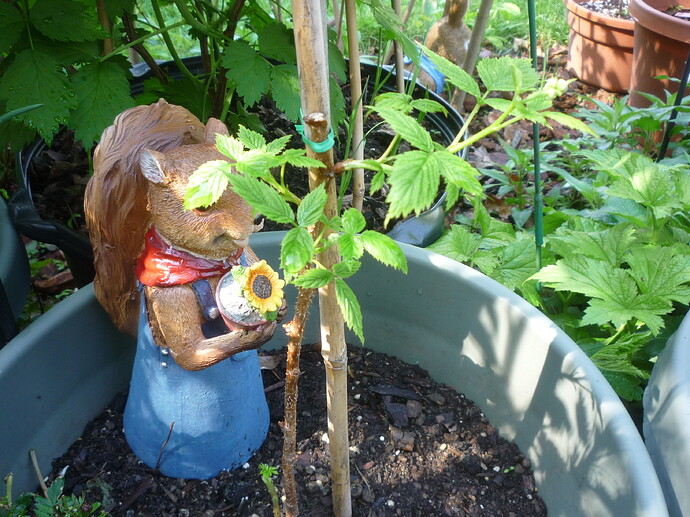 The Miracle grow organic all purpose is granular. If you like raspberries, I think JoanJ is a good one, thornless and produce fruits summer and autumn. It does get tall

I have been growing raspberries for a while now, easy plants to grow. 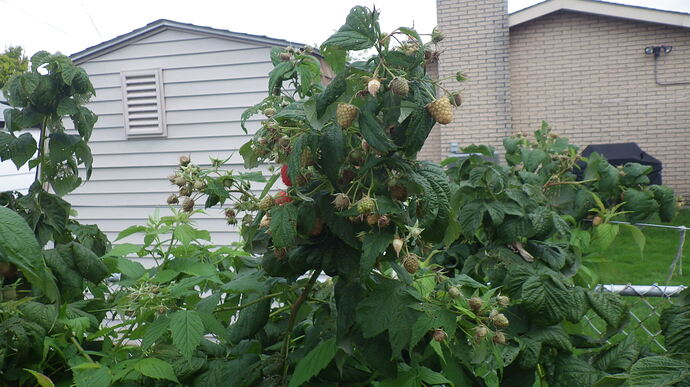 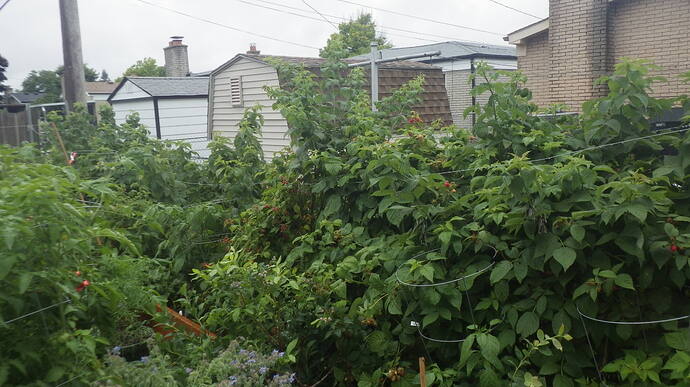 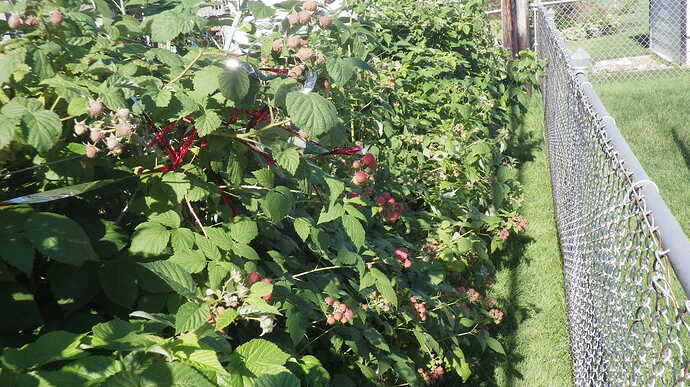 Nice and lush! Wish I have room and sunshine to grow them in the ground! Which variety is shown in 1st and last pic?

The first pic is Polka, it’s an awesome raspberry. It was slow to take off. I thought it was not that good a grower. Then the 2nd year it exploded. And the taste is right up there with the best red raspberries, Caroline, Taylor, etc.
The last photo is Allen black raspberry, they are red before they turn black. Jewel black is better tasting but Allen produces massive amounts of berries. Makes an awesome jam. I grow every color in the rainbow (well almost) 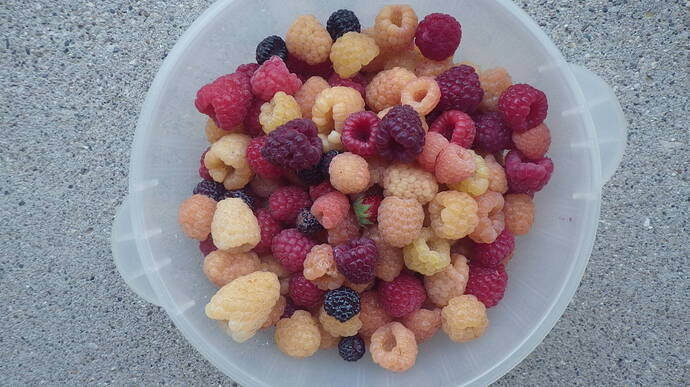 UR killing me with pics of your luscious berries. I don’t have any of the ones you mentioned as I am not fond of thorns though I did get Kiwi Gold and Anne this yr.

Anne has few thorns! I have blackberries the thorny types, and so on raspberries I don’t even notice.The blackberries are much worse, you have to have gloves to touch them. I can move raspberries no problem. I just planted two cacti in the garden, it was rather difficult, the darn thing got me good, stuck to me and like a hot potato stuck from hand to hand as I tried to drop it!
I bought two winter hardy cacti, they came in today. Expecting two trees today, they better get here soon!
Speak of the devil UPS just dropped them off! OK, see you in the garden! I’m off to plant them!

Yes, Anne has thorns I gave in as there are no thornless yellow

Ouch and ouch! nah, no cacti for me. Have fun and don’t get stab by those suckers

This is a picture of the Peach Sorbet. It has a few blueberries that I will take off. 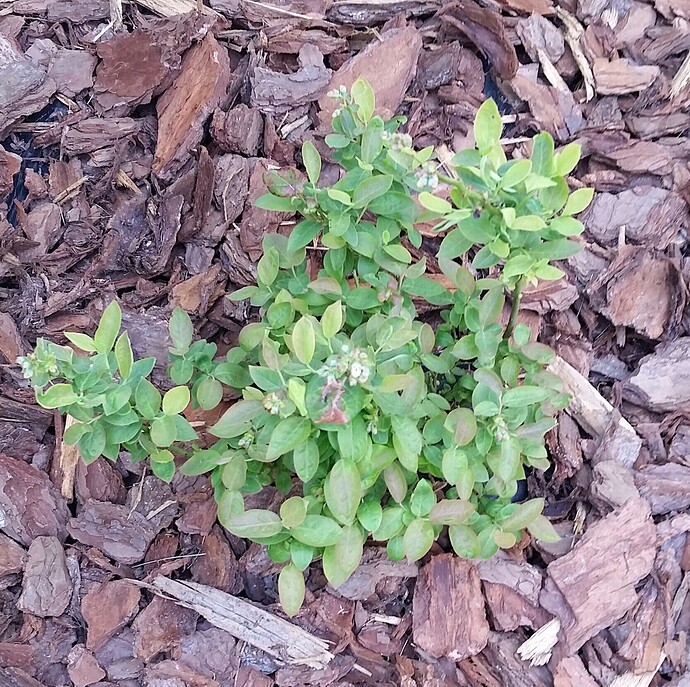 This is the Blueberry Glaze. It really does look like a boxwood or a barberry. 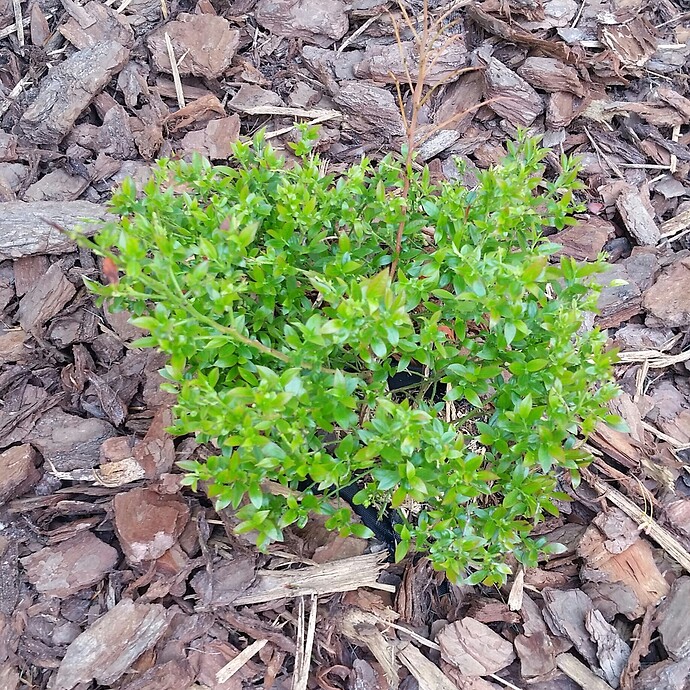