I can find Fat Free Sour Cream in N. Florida or S. Alabama. Have they stop making it? I’ve looked for the last 2 years since I moved here.

Several brands (Knudsen, etc.) are available at Walmart stores in the U.S. but not yours.

I live out in the country now. It’s hard to find any fat free foods. Only publix carry fat free whip cream if your lucky it’s in stock. Cant find fat free evaporated milk or ice cream either. I just bought an ice cream maker to make fat free ice cream but I’ve got to drive 40 minutes one way to get fat free milk.

I was spoiled living in Atlanta with all the markets and contractors fighting for work. I scheduled 3 electricians last year to install a new outlet outside and none ever showed up.

Winn Dixie does most of the time. Maybe try Piggly Wiggly if ones near you.

My area is like that there are few people who actually do work here. Had a ruptured water line and im confident if i didn’t know people it would have been hard to get it repaired.

No judgement here, but fat is an excellent form of food for humans. It’s excess sugars in the diet that really help a human pack on body fat for the winter time. This is an evolutionary advantage. Sugary foods are usually much more seasonal than fatty foods so our bodies are adapted to maximize the sugar by packing on weight to get us through the lean times. With all our modern conveniences that now works against us. Eat fat and don’t feel guilty about it.

Fat free sour cream sounds awful. Does it taste like real sour cream? I would guess that it tastes more like yogurt than sour cream.

We try that stuff like low fat sour cream when its on sale. Tried it last time i saw it and the lowfat did taste somewhat like sour cream but lacked the creamy texture. It was firmer than real sour cream. The taste was great on tacos we could not tell the difference by the time everything was on there. Eating it as a dip is more challenging because there is no salsa to mask the texture or flavor. Years ago we liked taco bell when they used sour cream, black olives etc. but now they are more ordinary. Sour cream makes a burrito or taco 3x better.

Mostly not, maybe 40% fat. But it’s what makes cream good.

I grew up on a farm and drank the better part of a gallon of whole fresh milk with tons of super thick cream on top every day. I still drink the better part of a gallon of whole milk on a daily basis. My wife used to give me the gears about drinking so much whole milk and would constantly bug me to drink 2% or skim milk because whole milk was “unhealthy”. I kept drinking whole milk and had a stellar colestorol level, and never a broken bone in my life. The wife was all of 90 pounds and had to take Lipitor for her high cholesterol.

I eat sour cream and even whipping cream on a regular basis. I’m in my sixties now, so why would I ever worry about stopping now. At this point in my life why worry about such things. I had fried ham and bacon with pan fried potatoes and eggs for breakfast this morning. You only go around once, why deprive yourself if your health is good. I’ve had plenty of friends that were skinny tea totalling health nuts pass away in my many years and I’m still here. Who’da thunk it? 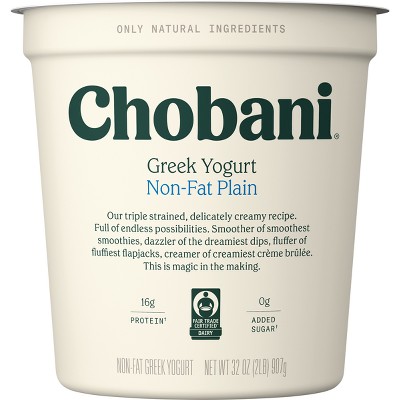 Each of the major brands and white-label house brands have something similar. On baked potato it’s interchangeable with sour cream. Those of us on a low-fat, low-sugar, low-salt diet need these alternatives.

The only dairy i drink… is heavy whipping cream in my coffee. Good fat supply… but very low carb. I do include grass fed butter too… about a 50/50 mix… again high fat low carb.

I can eat several cheeses… low to no carbs… high fat.

My body functions best on…

I eat ketovorish… most of the time.

Have had zero carbs so far today… lots of fat and protein… will have a few carbs for dinner.

I would never seek out no fat things… got to have fat for energy… when you cant eat carbs.

Everyone should feel free to eat or drink whatever they want why ever they want. I prefer Diet Dr Pepper to most sodas based only on taste. If the extra sugar Dr Pepper tasted as good, I’d drink that (on the rare occasion I drink soda).

This does bring up an interesting point, though. Out of curiosity, I looked up the ingredients to fat free whipped cream, and cream is the third ingredient. How on earth does one have cream without fat and it still be cream? That’s like fat free lard! 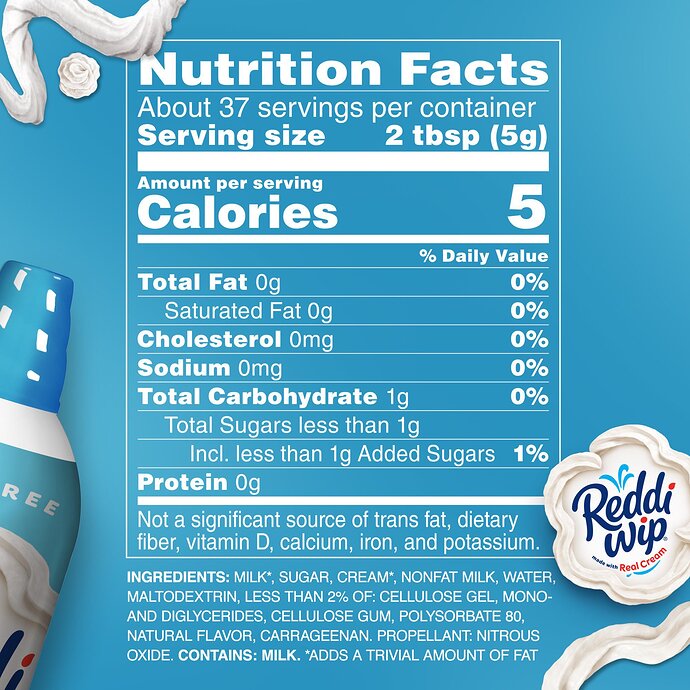 Nonfat milk is listed as a separate ingredient.

And Milk has an * and say adds trivial amount of fat. And Cream has an *. Odd stuff

I really don’t like the taste of yogurt but I’m looking for something to eat on my potatoes instead of butter so I will try some fat free yogurt since I’ve never tried it on potatoes. Thanks.