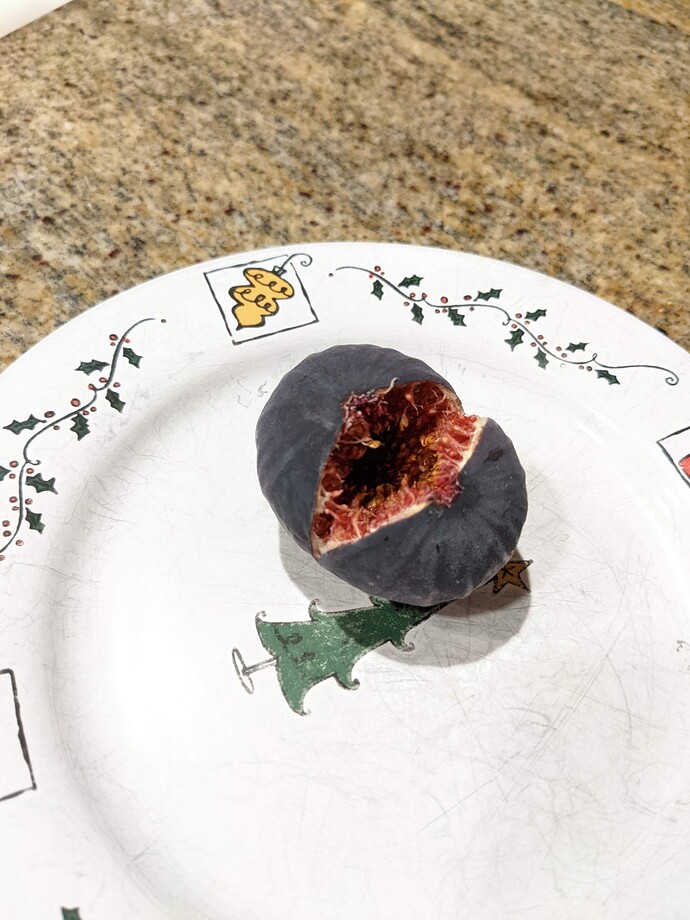 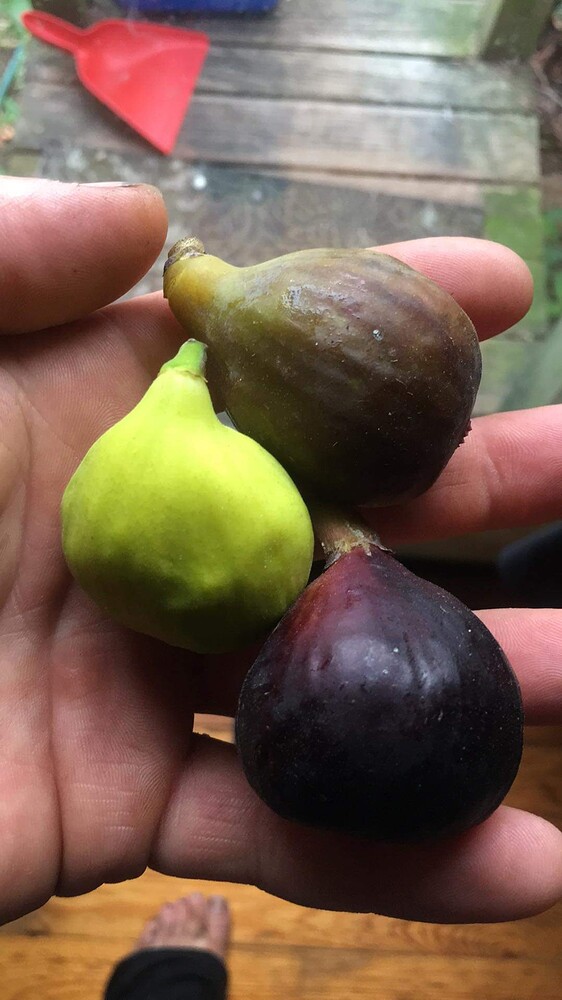 Right on time for new school year! PBF is a hit with the kids. They actually thought it was jelly! 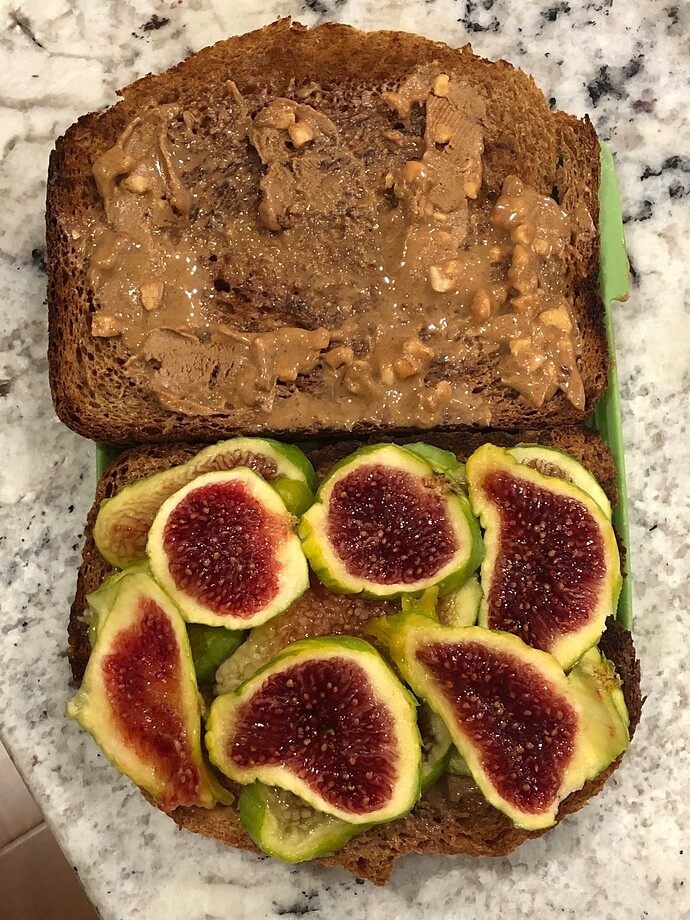 Look delicious! But what is PBF?

But what is PBF?

I now have a sandwich to aspire to for my own lunch box. Well done!

Just when I think I’m going to stop getting more figs… I’m going to have to start grafting my potted varieties soon, I won’t have room to park in the garage this winter!

I potted up some fig air layers into tall tree pots two weeks ago. Am paranoid about over-watering and killing them before they are over the potting shock and start to grow vigorously. Any tips on when to water? The soil in bottom of pots is damp from my watering two weeks ago.

I’ve been keeping an eye on two that @eboone started for me. One lost almost all of it’s leaves from shock (they are growing back now) and the other kept all leaves. I’d say just make sure your mix is well draining as all potted figs need and you should be fine as long as they don’t dry out completely. 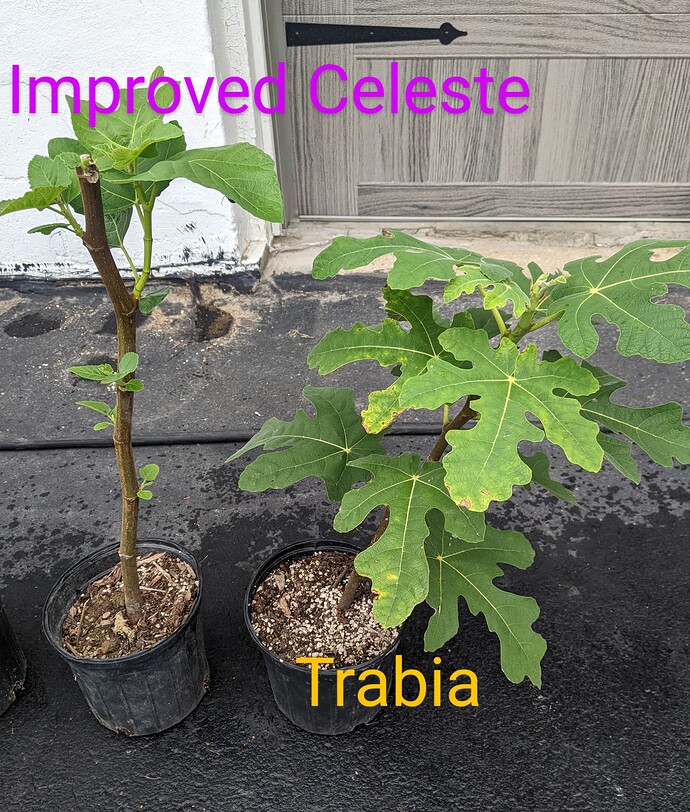 There’s one fig I’m not too crazy about, it tends to crack and attract june bugs, I got it at the farmers market, the label says Black, not BlackJack, not Black Mission. So if I get some new figs this January, I might junk this fig. But I already give my brother a similar one, he said his kids don’t like to figs either. I just feel bad getting rid of fruit producing trees.

my babies are growing; next year they will be big 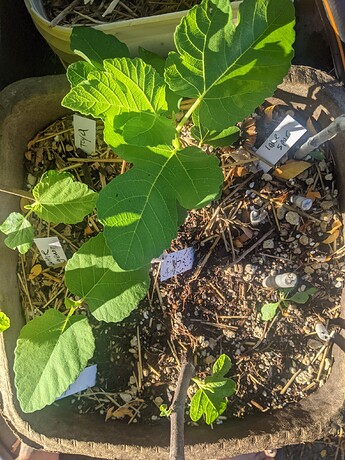 black Bethlehem has fruit on it, and the Genoa. 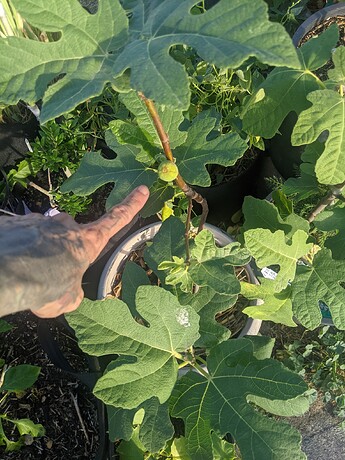 the fig, olive and banana department. I can wait, and I’ll be putting things into the hoophouse oct 1 in case of frosts. 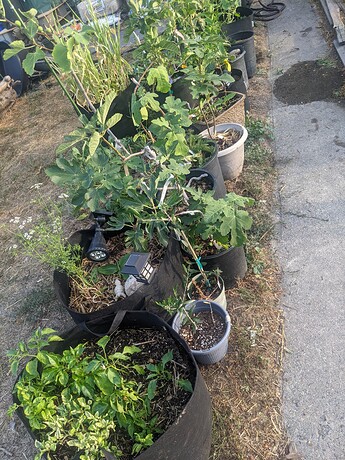 I’m disappointed in my CH it hasn’t really produced this year and it’s been alive 2 years now, bushy growth but not really much fruit. I expected more from the basement over wintering this year 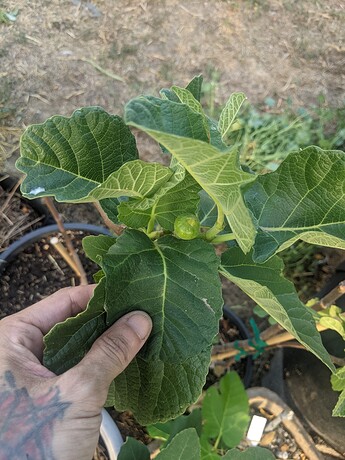 the white genoa that had a personal grudge against me, though, has more on it even though this is year two (I bought it as a year-old plant) 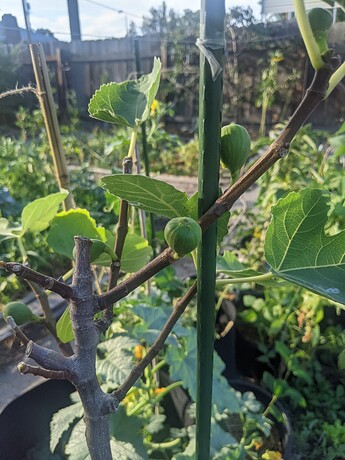 I wish I knew how to get them to really produce, besides time and patience.

Potting mix (pine bark/fines, optisorb, coco coir, compost, sand, dirt, lots of options, research!) , pH, fertilizer (including iron, calcium, and other micronutrients needed), water often but make sure the potting mix drains quickly. This is all advice I’ve been given and there are a few good threads here with different ways to do it. @Drew51 and @eboone have had a lot of potted figs and offer advice I’ve taken but others are also very helpful and knowledgeable too.

Don’t fertilize too late in the year and don’t use too much nitrogen if you are getting good leaf growth but no figs. That could be the problem with Hardy Chicago.

Got this yesterday from my 3yr old Hardy Chicago: 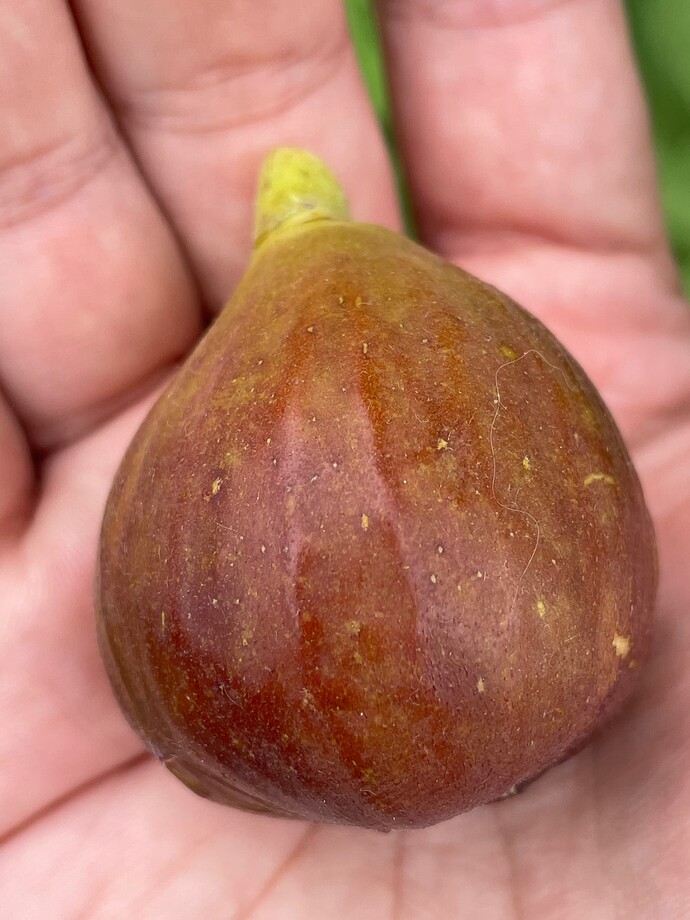 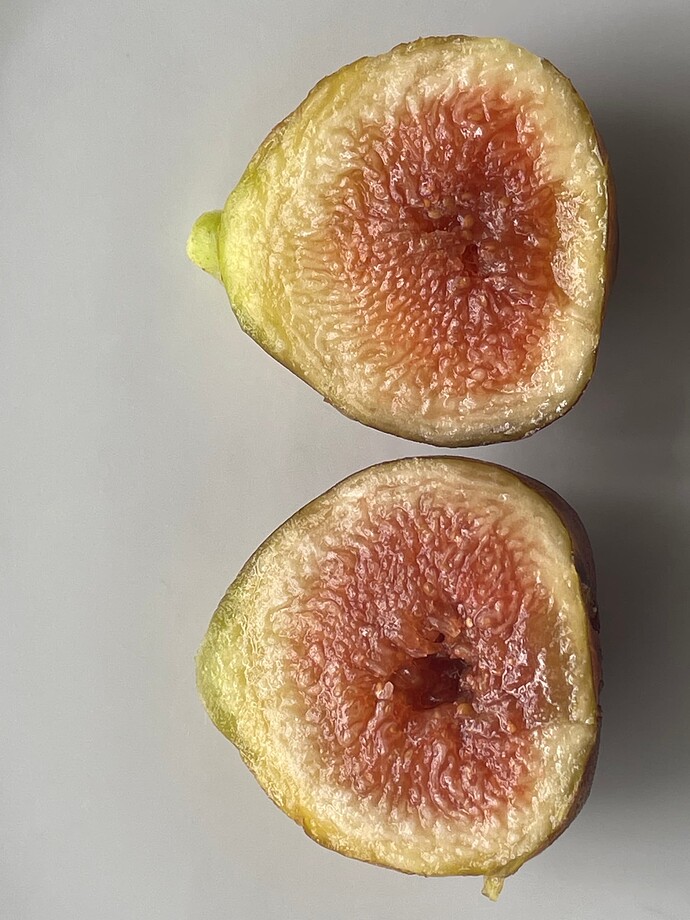 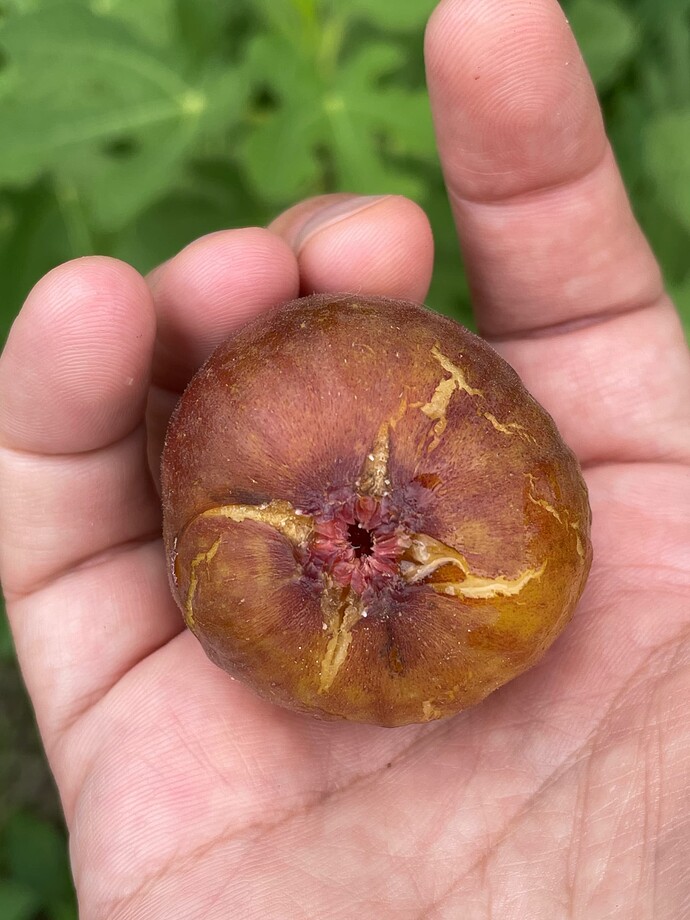 This is its first year in the ground here in 6B and it died back to the ground over the winter.

Ben’s Golden riverside turned out to be pretty large and great tasting fig. 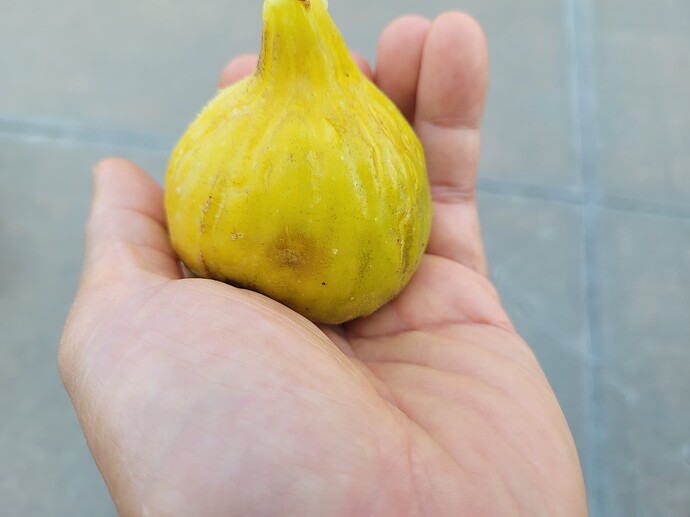 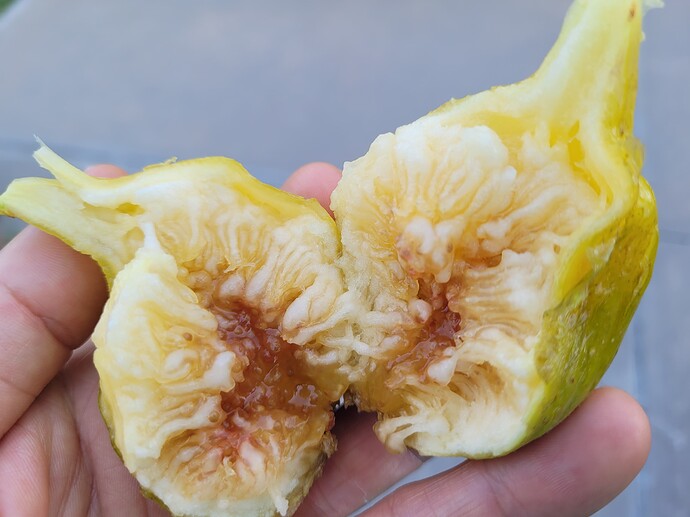 I was always wanting to get this variety. I’m at capacity with figs at the moment… but I might cull my Negra d’Agde to make room for a Ben’s Golden Riverside somewhere down the road. Now if you hand pollinate that girl, it might turn into something really special.

There’s more than one prominent fig grower that swears it’s Yellow Long Neck. There are a handful of youtube videos with them comparing the leaves, fruit, taste, ripening time, fig shape, growth characteristics, etc and showing how they’re all the same.

All that said, Bass has some YLN in stock right now if you’re looking to pick it up!

EDIT: FWIW Bass has not (to my knowledge) ever sold “Ben’s Golden Riverside” despite having gotten it from Ben himself. He has given BGR to others though (some of the same people who say it’s YLN). The fact that he doesn’t sell it, but does sell YLN, speaks volumes IMO.

Here is one of unknowns that turned out to be a Chinese commercial fig called YangZhou (YangChou) Purple. As far as I know, it came out of a Chinese fig breeding program that is similar to LSU fig program. Its little brother is called BoJi Hong (Persian Scarlet Red in Chinese), which has scarlet red skin and similar to its parent California Brown Turkey.

The YangZhou Purple is much larger. The first fig I got is 62 grams. My friend got a 133 gram fig from container tree. His tree is much older.

This fig is a mid-season fig that slightly behind Hardy Chicago. It takes about 87 days to ripen. It has a slow and long hang time (5-7 days). For this reason, the fig does not crack and does not split in rain. With its deep purple red color, perfect round shape and excellent balanced fig flavor, it can be an excellent desert fig 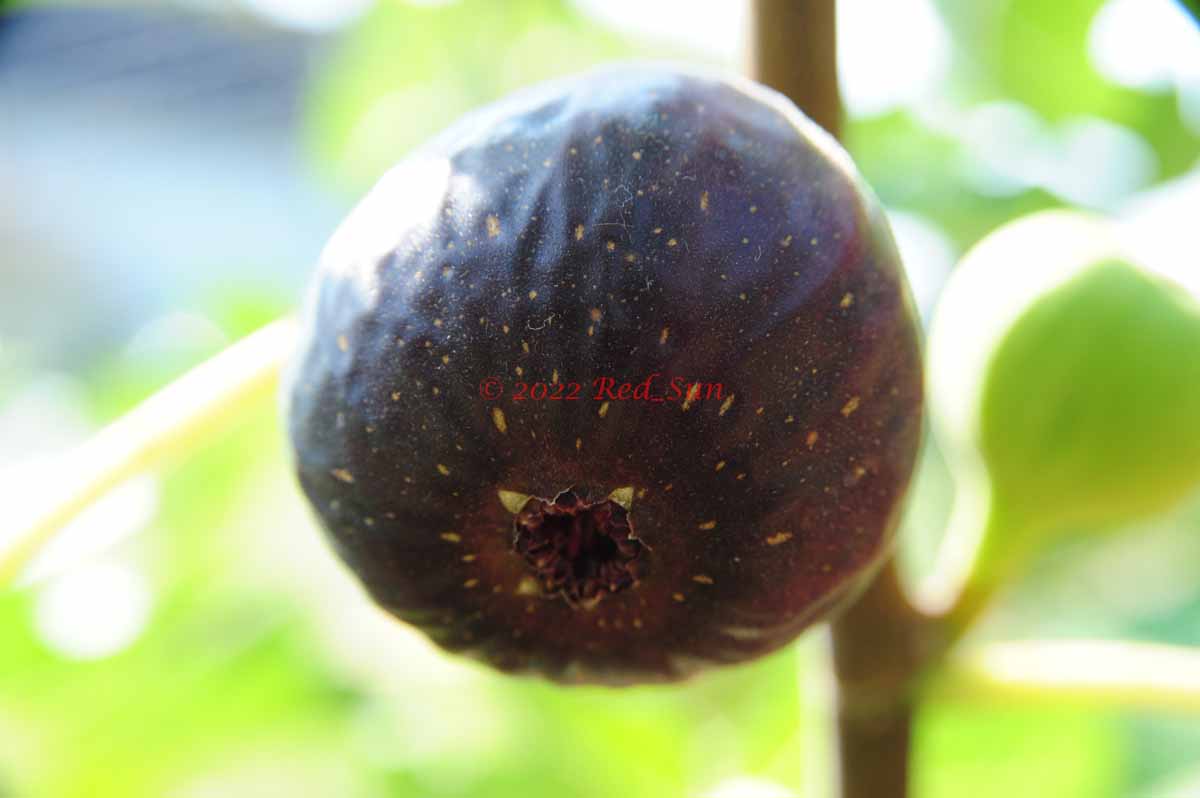 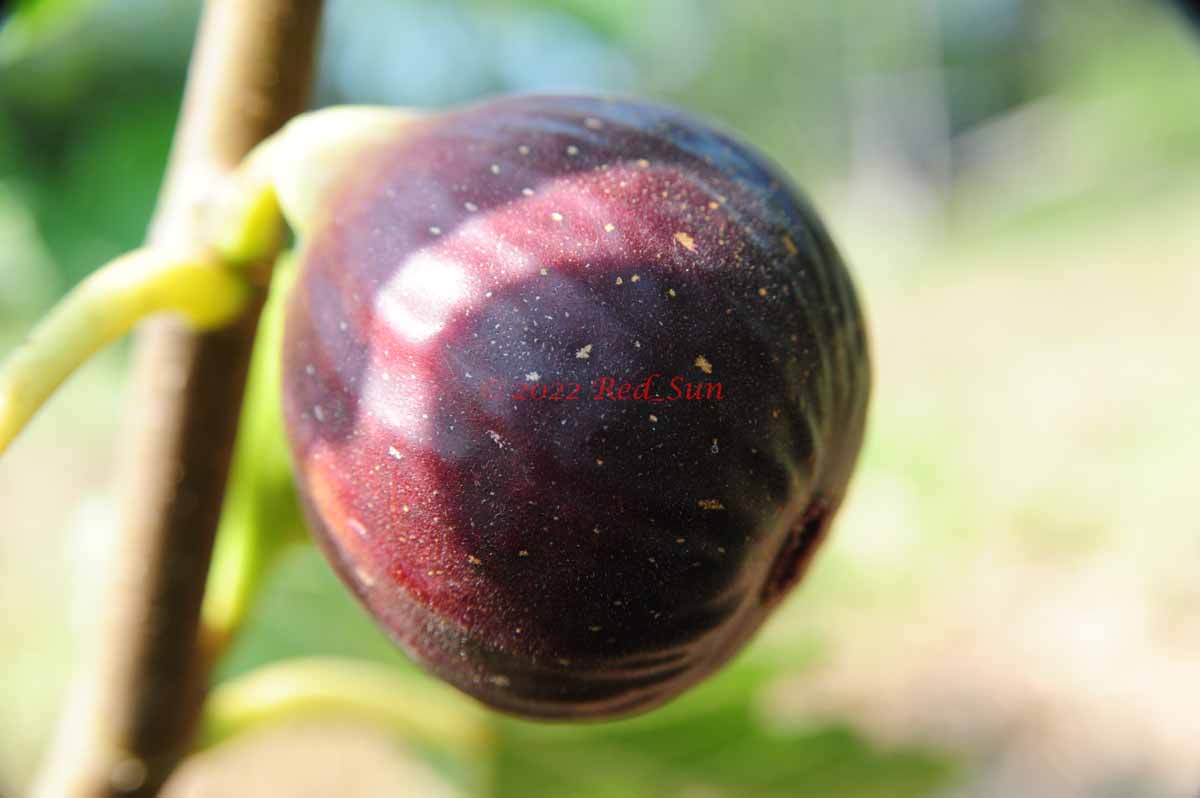 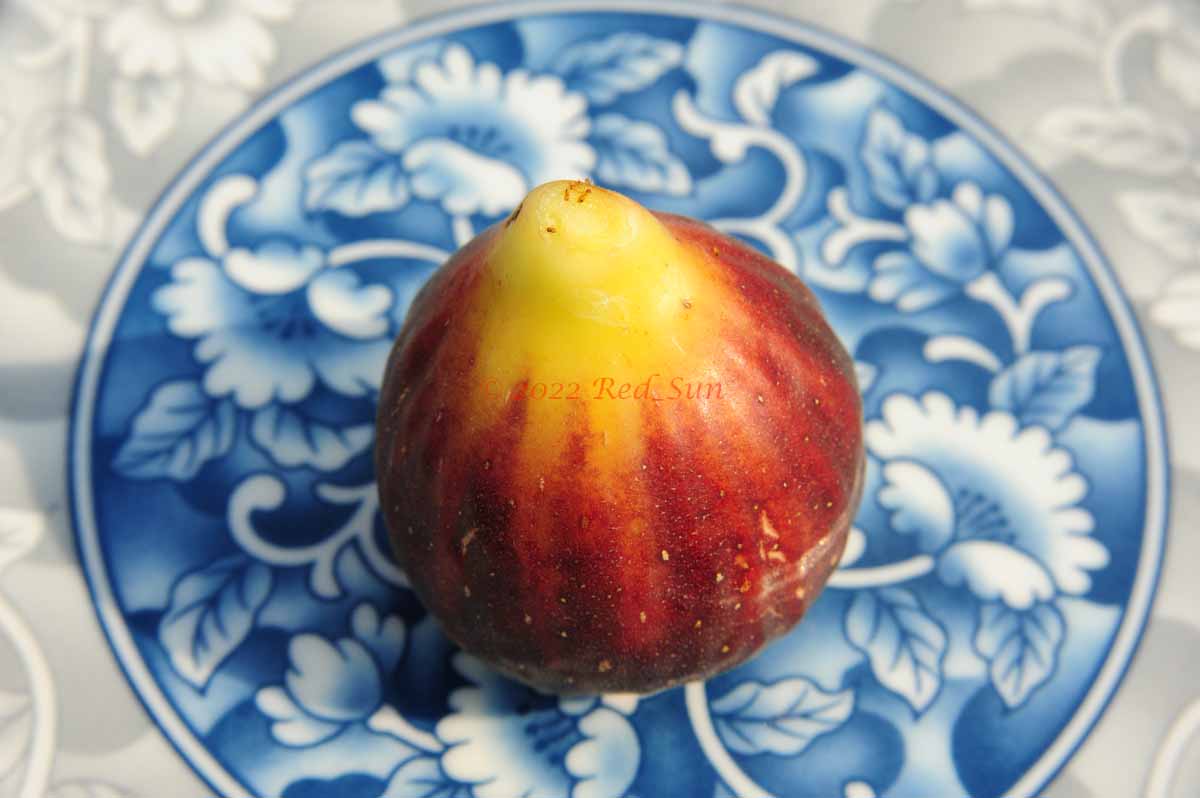 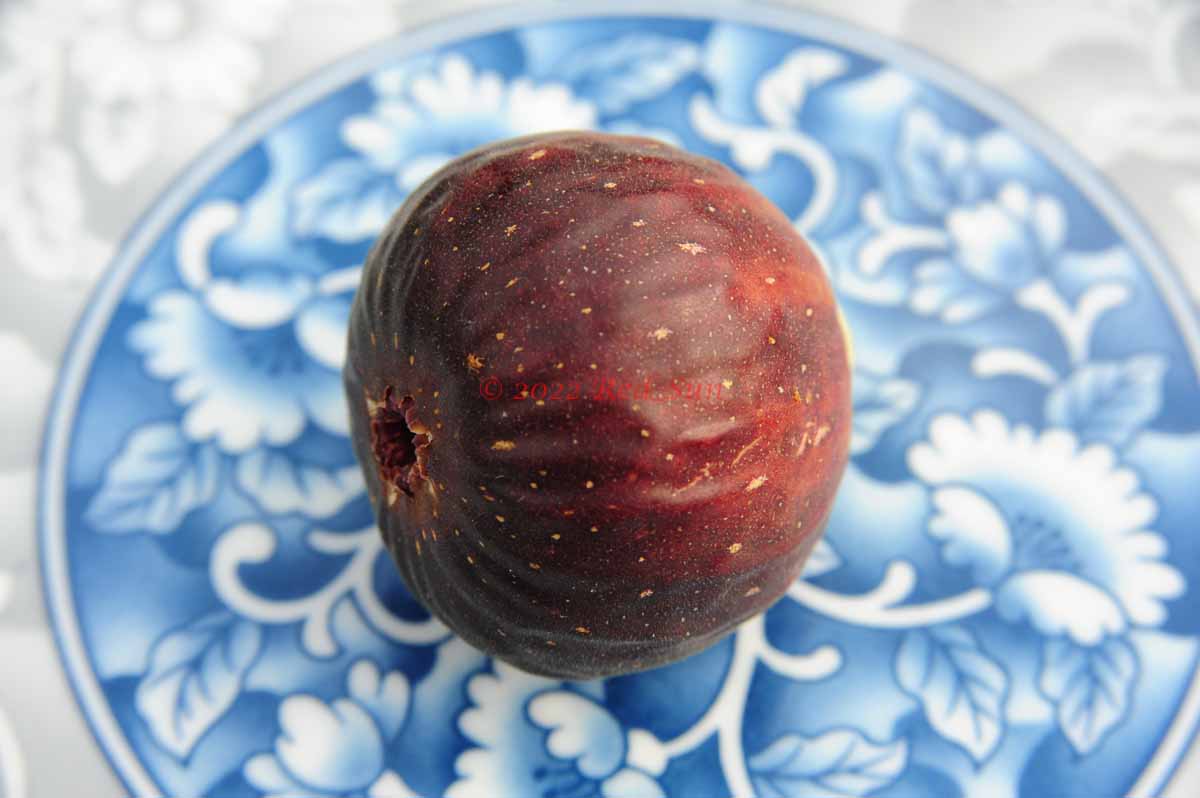 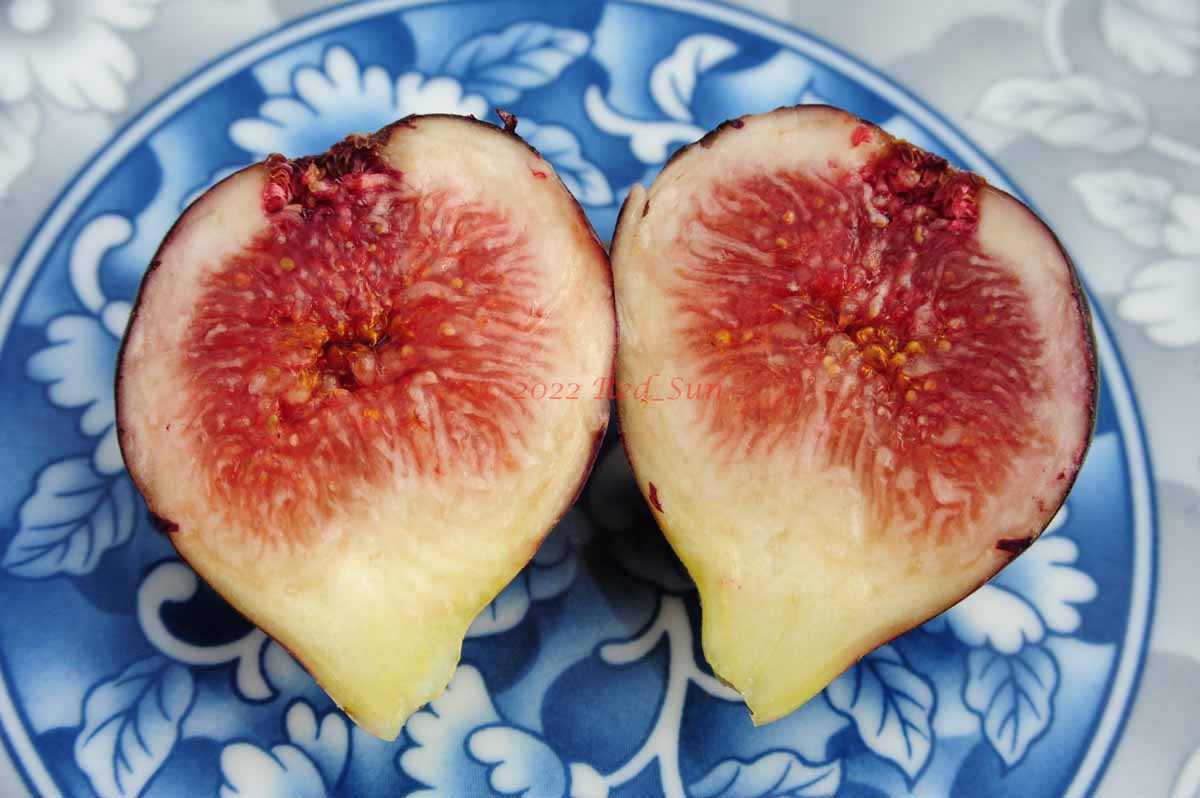 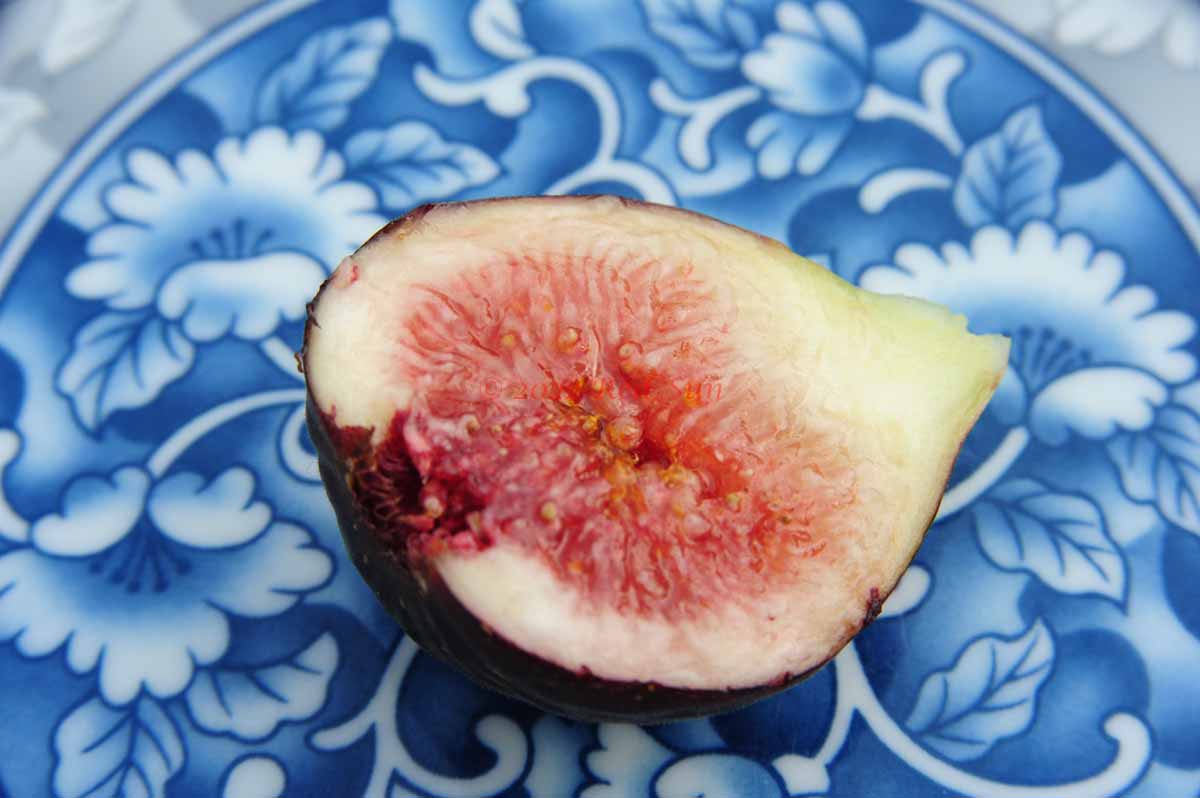 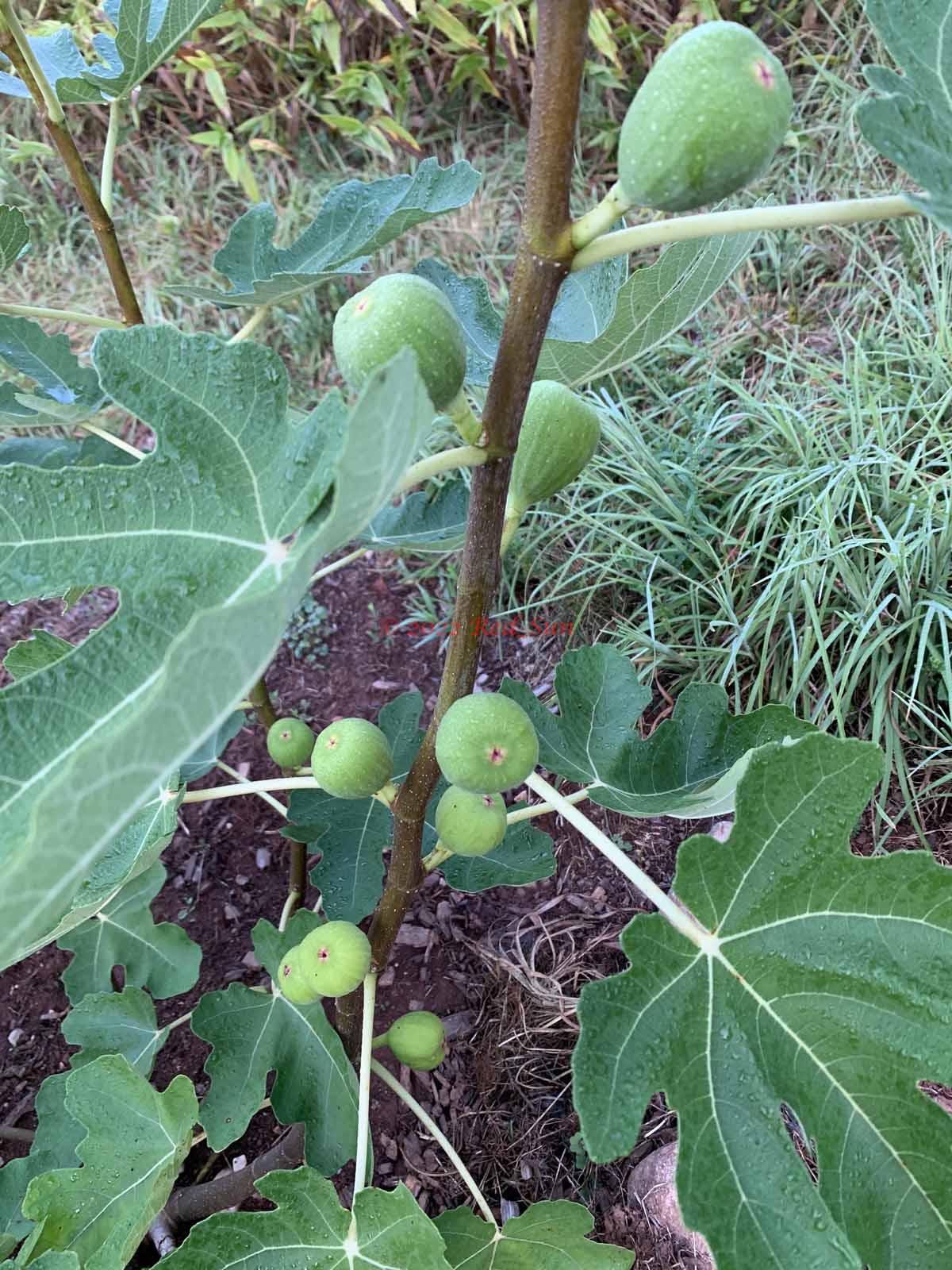 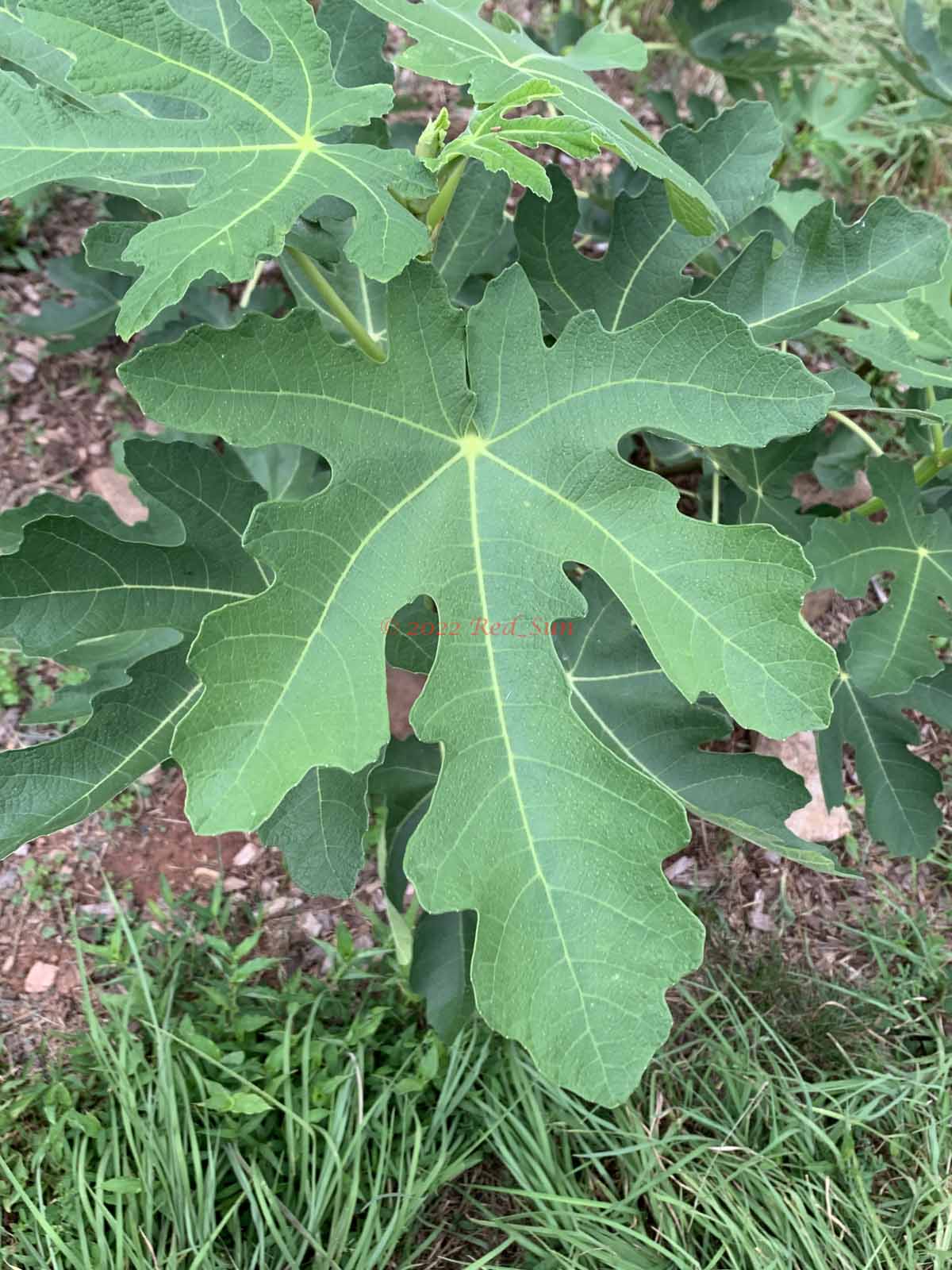 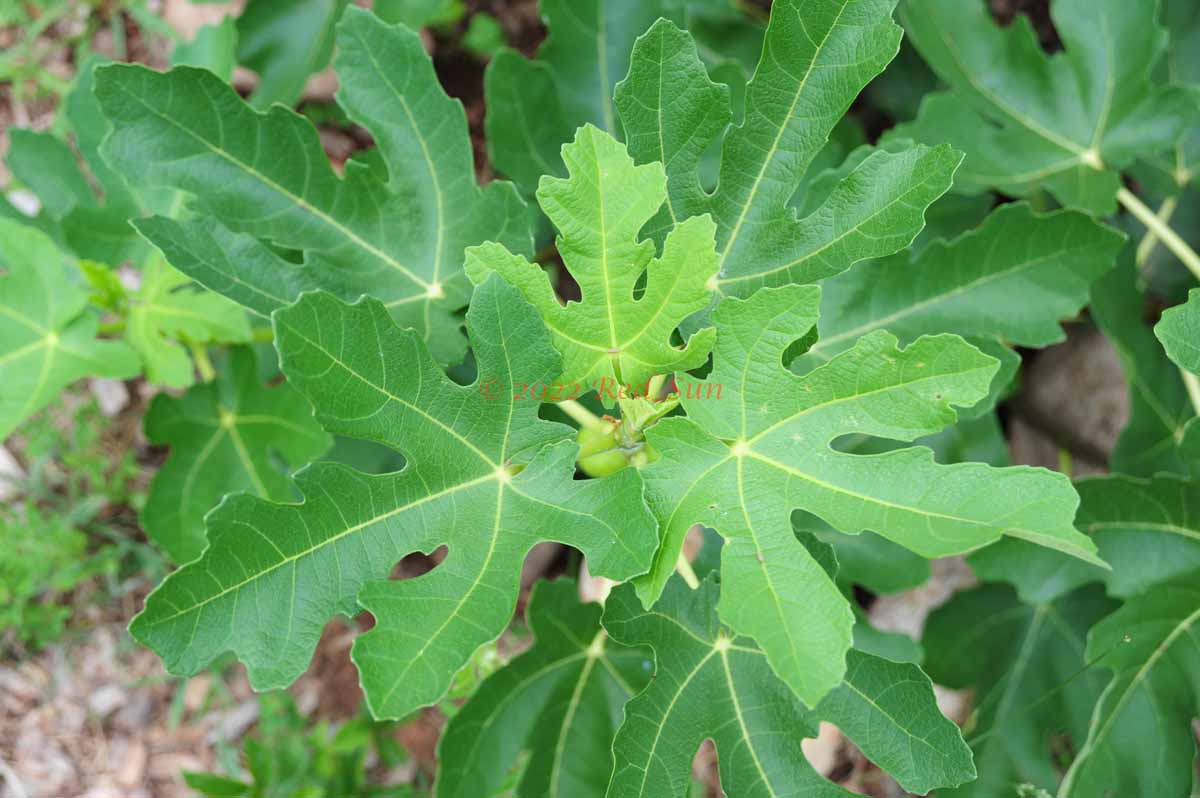 Here is the Italian Yellow Westfield from my friend Aaron Delmanto. Some say it is similar to Brooklyn White. But others say Brooklyn White is a late fig. So I get lost here.

It is a mid to large yellow fig with melon fruity flavor. 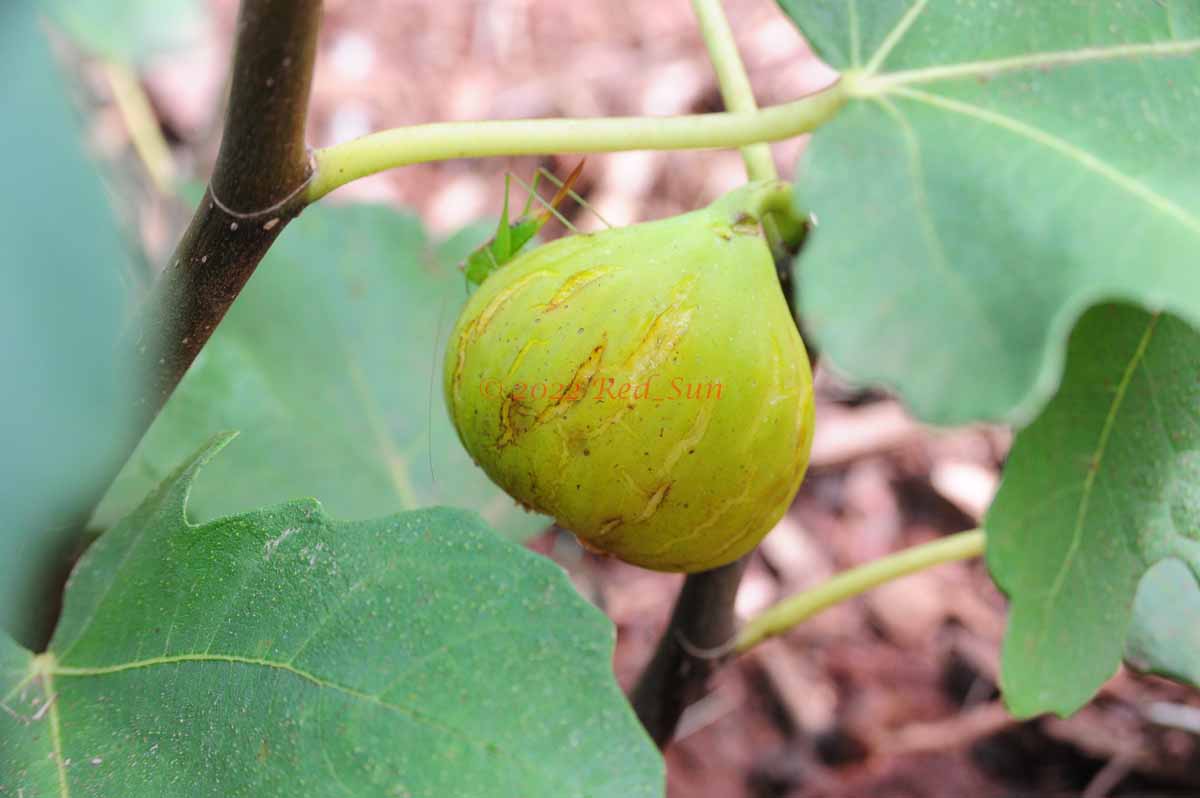 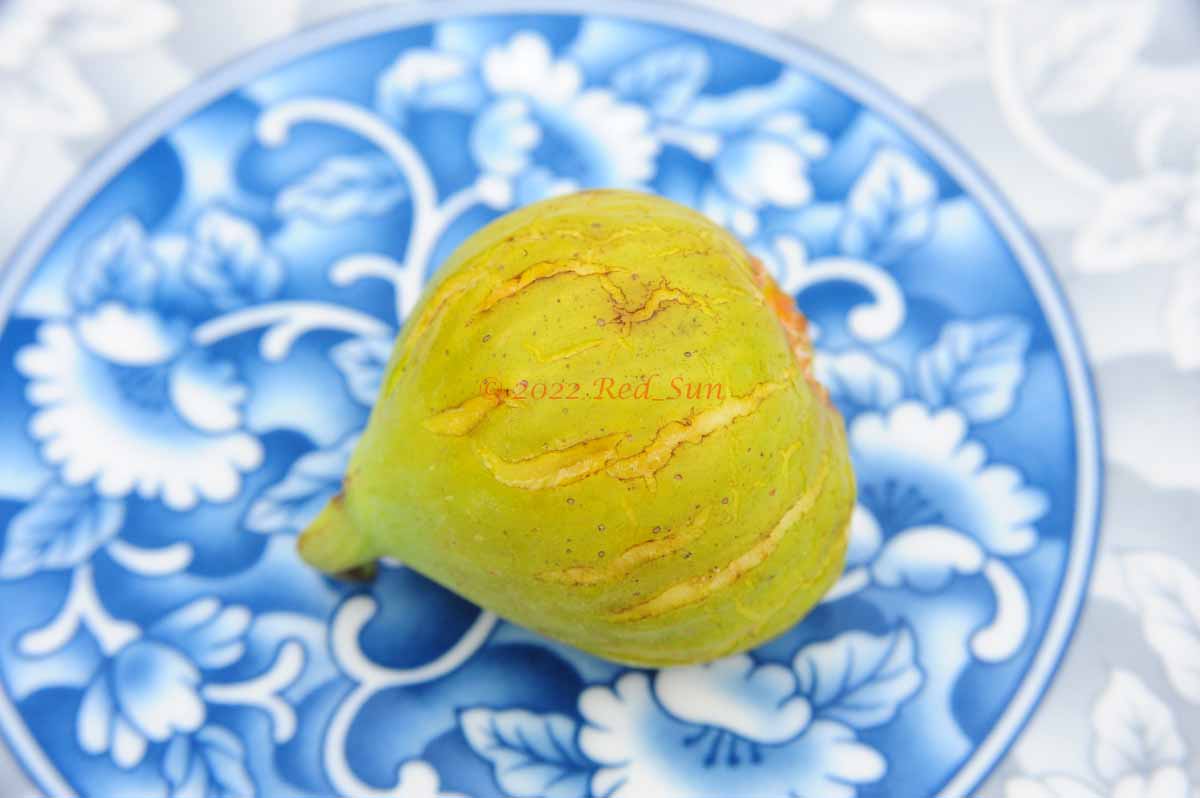 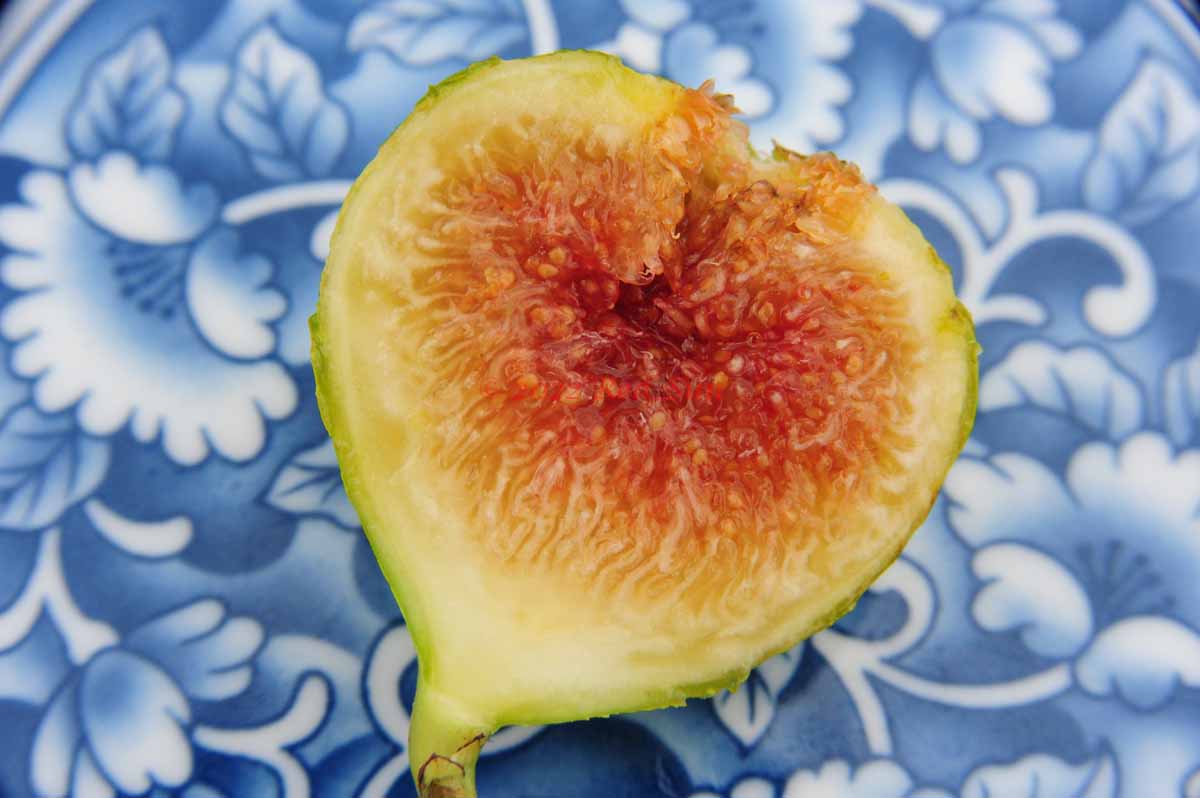 Does anyone know what might be causing these leaf spots? Out of 10 varieties of fig I started from cuttings this year, mostly in the same soil and growing conditions, this is the only one with these spots: 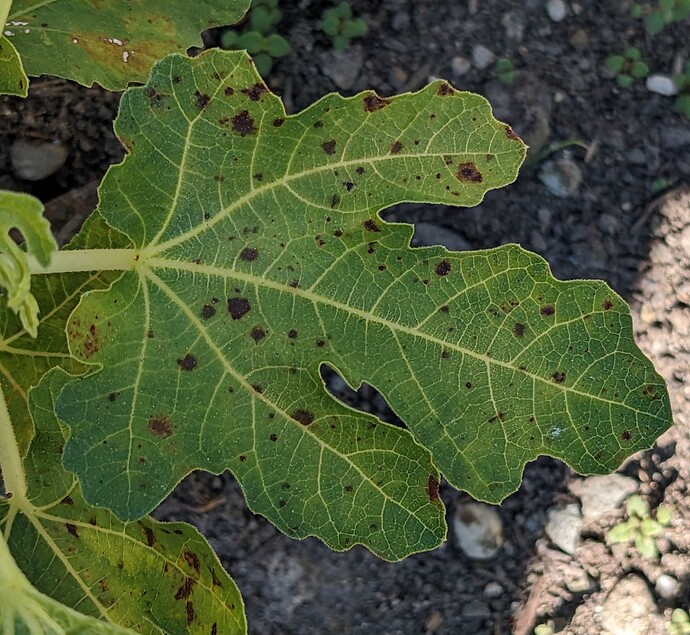 The fig is believed to be “Olympian” but the person who gave it to me wasn’t sure, just that it makes very large green-skinned figs.

I think this is typical fall rust. High moisture on thick hairy leaves.