My freeze dryer has shown up. It appears a LOT of people are going with freeze drying. I suspect it’s been the current atmosphere and upheaval from the Coronavirus and an uncertainty people may see. Not me, I have been planning this for years and finally dropped the dime. Just happens it took almost 6 months to get my Freeze dryer because of the aforementioned issues. Anyhoo…I am going to keep anyone who may be interested updated with my successes and or failures! 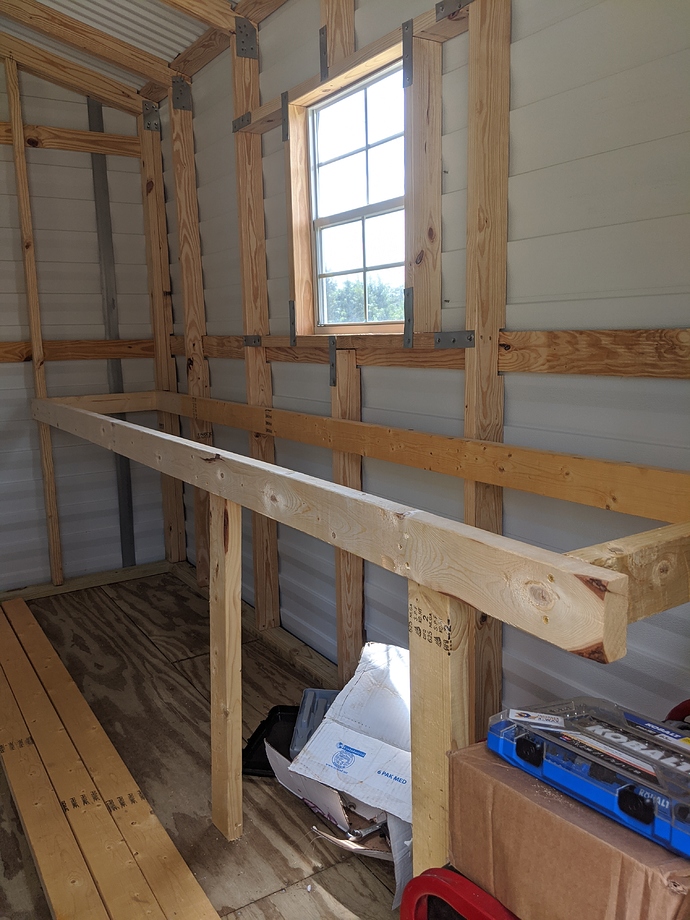 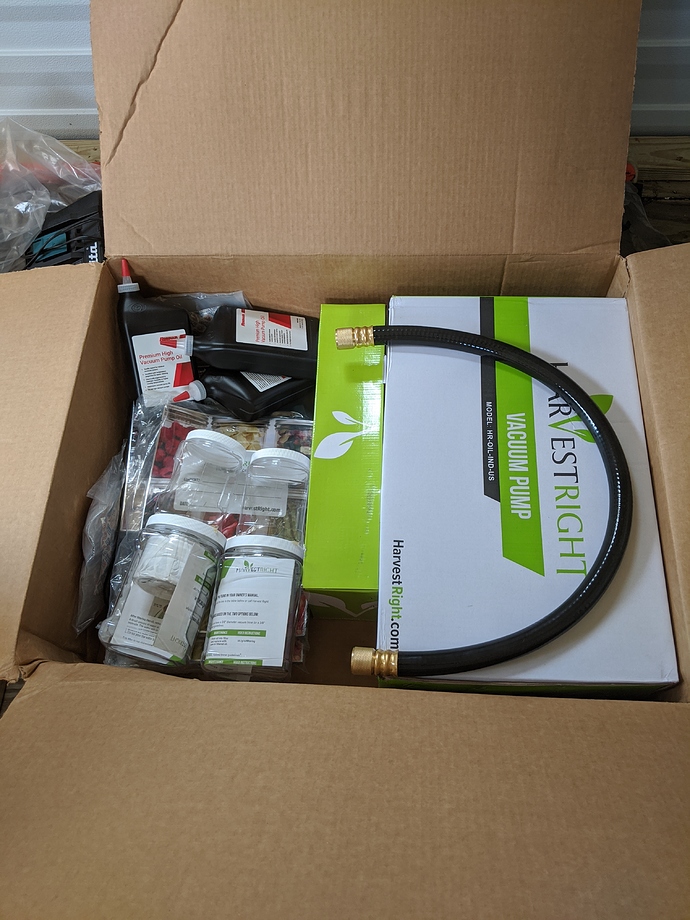 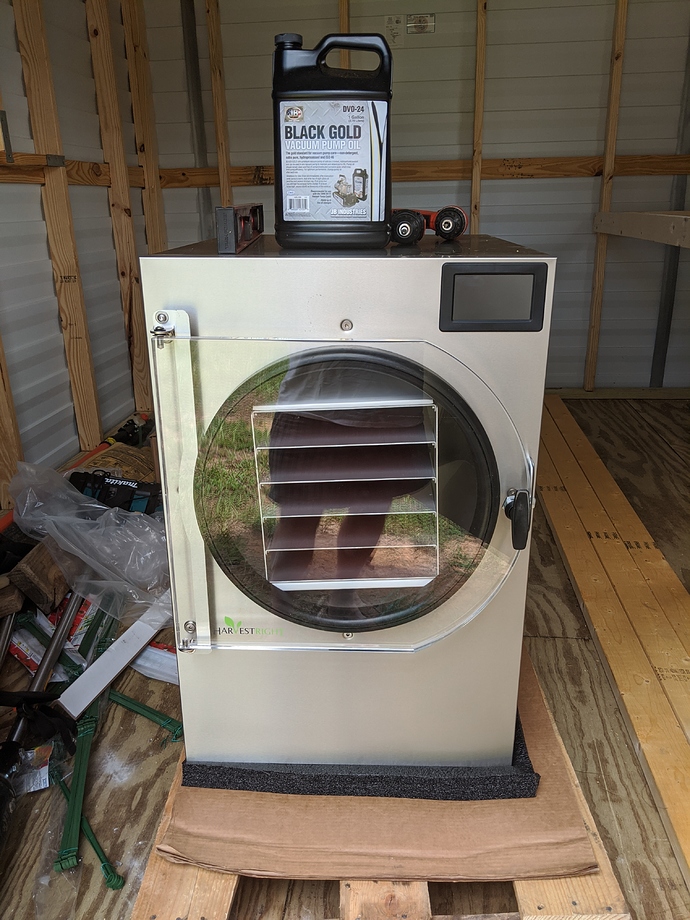 i was thinking of getting one as well. ill be watching.

How did you decide on this model? What are the dimensions? Any special electrical requirements?

Harvest Right is really the only freeze Dryer company with a great home model and it has a great reputation. A lot of people are using it and YouTube is loaded with videos of just about anything you can do with one.

I’m one who looks to a year two years three years down the road. 5 shelf is the biggest one and I may be selling stuff when I retire soon so I made sure to go ahead with the highest capacity.
Here’s info on the one I got

You can get pharmaceutical grade and commercial from Harvest Right but they start at like 10,000 dollars. I didn’t want one that bad.LOL

No special electric. It’s a 110 I’m putting mine on a 30 amp circuit just in case. I might invest later in the oil free pump but it was just to much more right now. I’ve read up and it’s worth it. I got the upgraded pump that uses oil for now.

I knew you would have done your due diligence😉 Thank you so much for the additional information. Please keep us updated.

I had to come here and add this.

You should stick to the reccomended outlet and amperage for these units. A 30 amp means that it could double its pulling power before being shut off. Your unit when ran at 130% load (it does this for short bursts) uses 15.4 amps if everything is all on and the refrigeration is maxed out. Usually this unit uses 10 amps or less so in that case you could triple the amount of power it should use before your breaker stopped things.

So! I did a test run and a full on run yesterday and today. Finally. Sorry I don’t have video. I’ll do one next time. Anyway. This is packaging and how the pork looks when finished. These two packs a large and small mylar bags with and oxygen pack are a 5 pound pork loin sliced thin. The small mylar potato is 12 medium to small regular cooking potato’s. The other with apple. I used a slicer , coring hand machine on 15 regular size just red apples. They are all crisp and just break into pieces. I’ll do a rehydrate video when I can. I’m actually very impressed. Absolutely no fluid left in any meat, veggie or fruit. Takes so much less space and maybe 1/10 th. The weight. Very cool 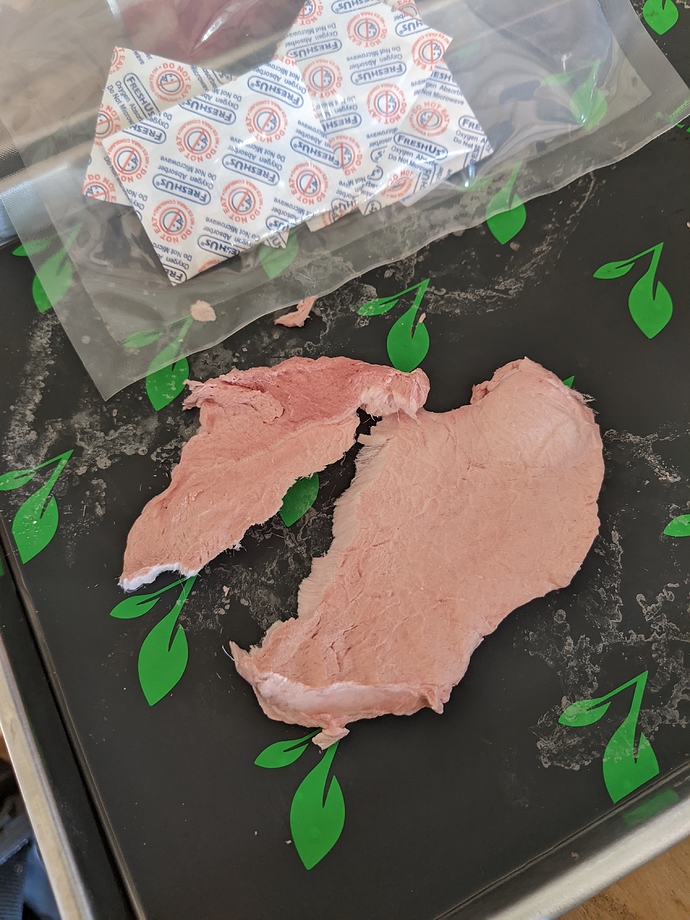 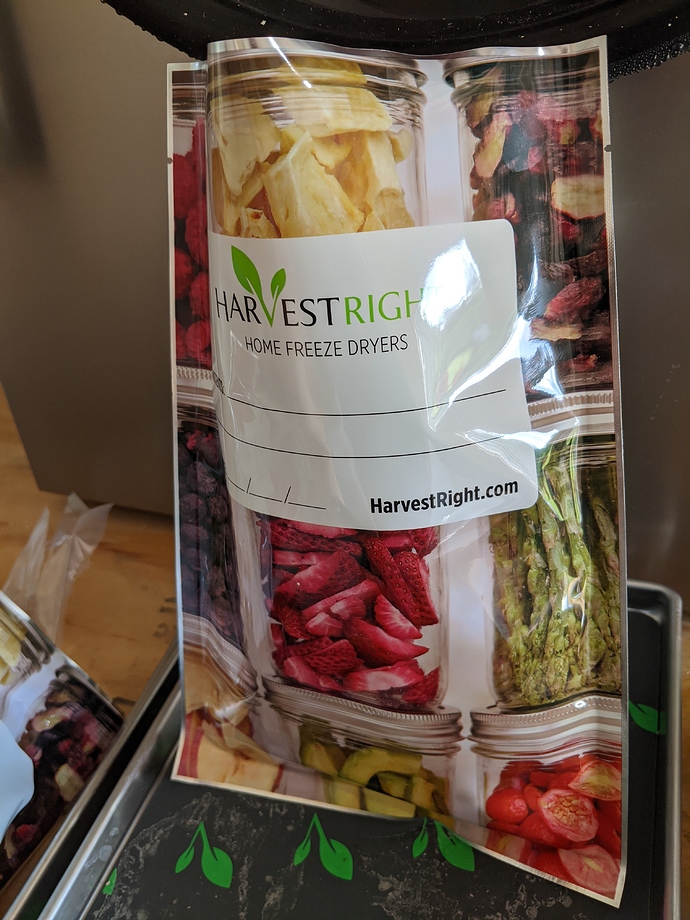 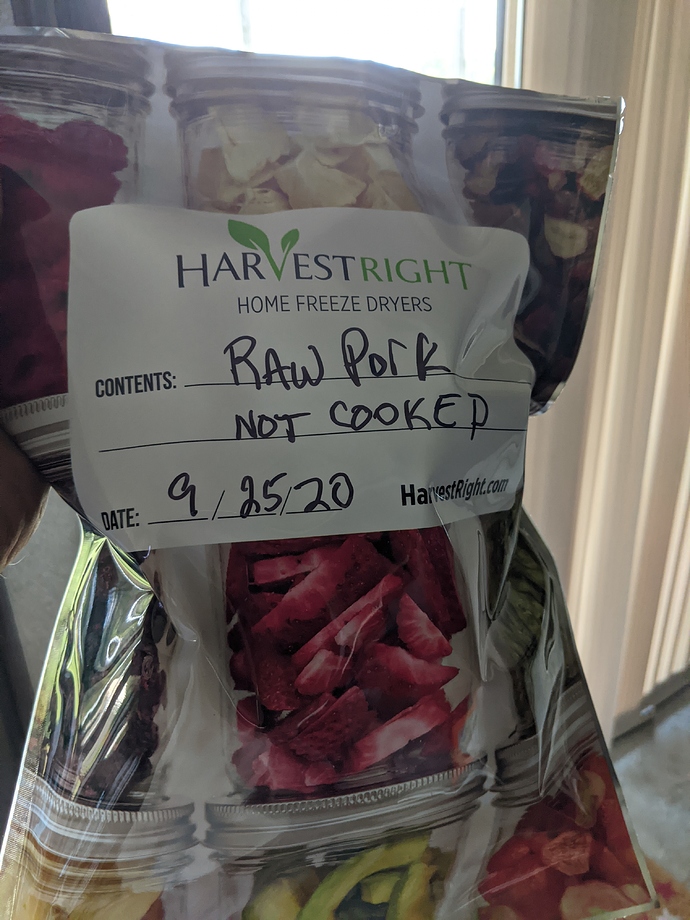 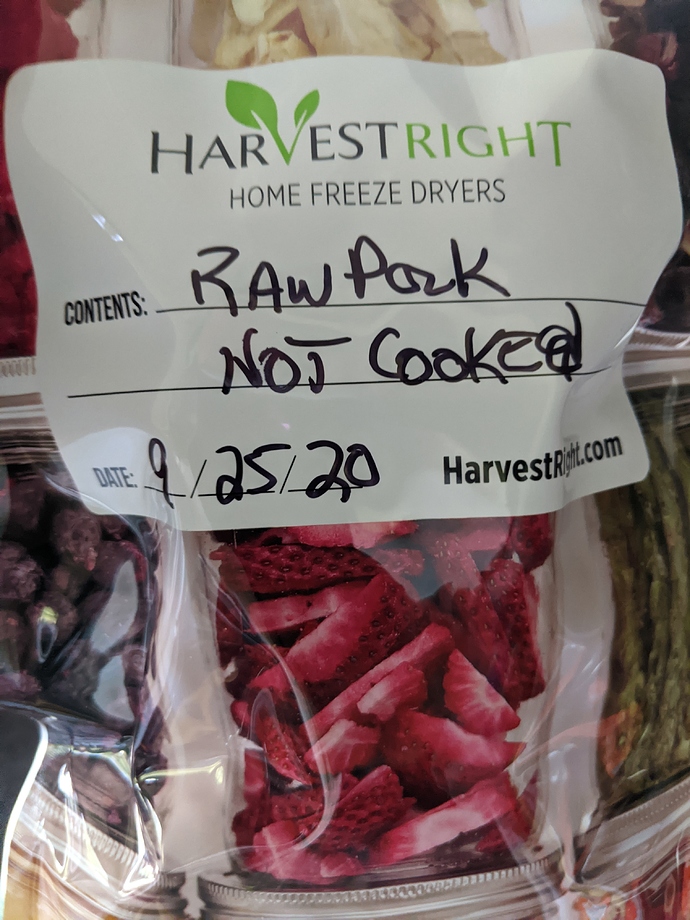 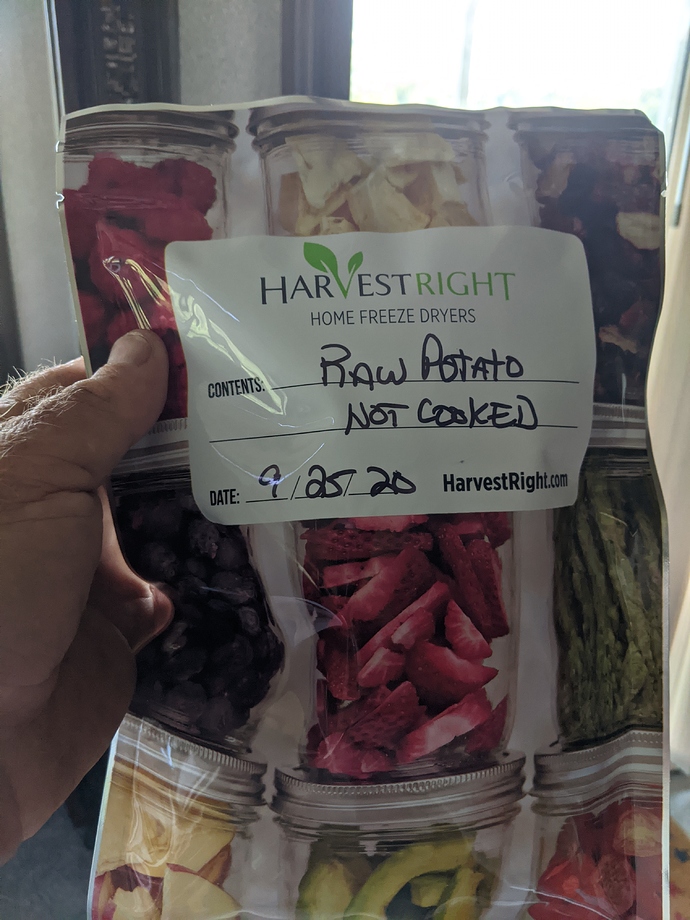 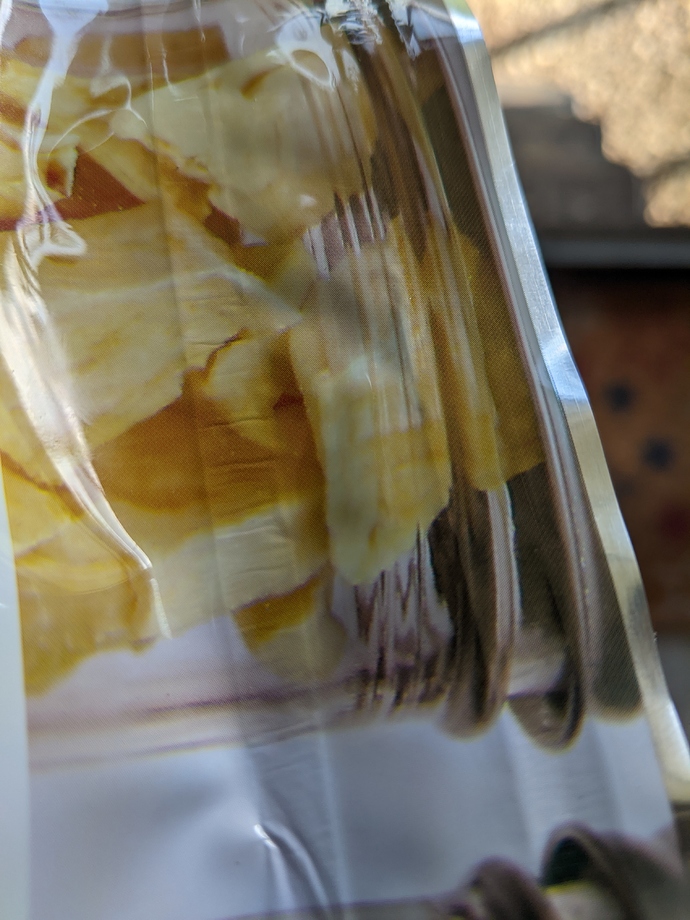 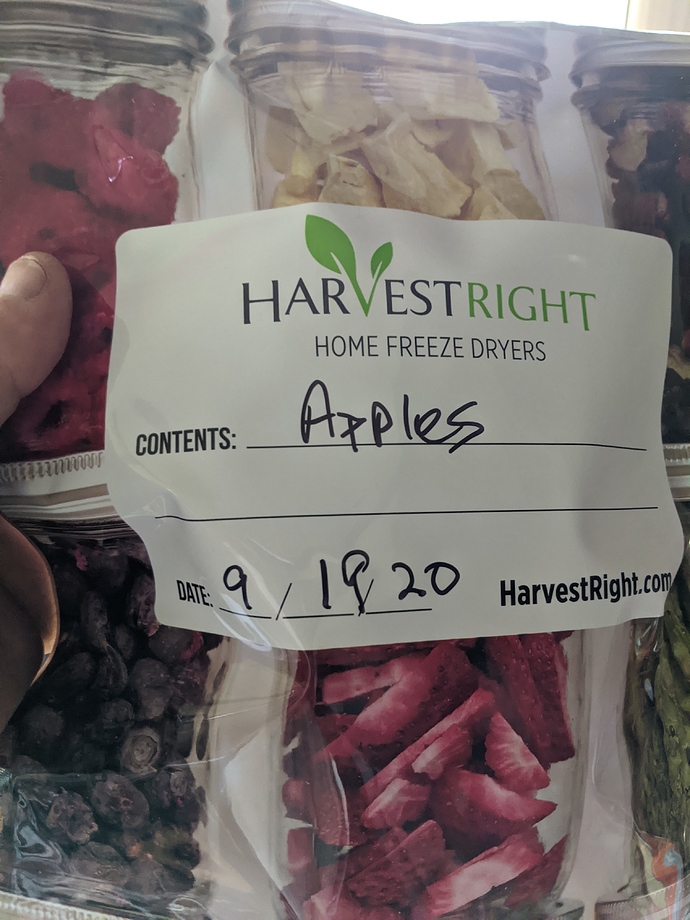 The only thing I’ve eaten that was freeze dried were some figs. These were from a friend in CA that grows great figs. It was like eating styrofoam. No sweetness, no flavor, really awful stuff. Maybe that was a one off but before you buy an expensive freezer you might want to try the finished product. It was really hard to believe how a sweet fruit could loss all it’s sweetness.

Is the finished product only good after being rehydrated?

@fruitnut It really is dependent on the fruit certain things are just amazing like peaches plums cherries raspberries anything tart is just off the wall good. Pure sugar stuff like watermelon and figs is the epitome of meh. Middle of the road stuff like apples and pears is dependent on what variety you freeze dried but tart stuff is really good for apples i think or the european pears that have that pear flavour it comes out and is amazing candy but other pears are just bland

I would never rehydrate fruit its a really unique reaction in your mouth with the freeze dried stuff.

I ate a whole bag of apples not reconstituted last week. It was my trial run. Tasted just like fresh to me. My grand daughter and wife are them and agreed.

I would never rehydrate fruit its a really unique reaction in your mouth with the freeze dried stuff.

Ya that good ole styrofoam reaction.

No way I’d spend thousands on a freeze drier. My dried fruit is as good as fresh if not better. And that’s a 50 dollar drier or sun dried.

But can you dry ice cream sandwiches or ice cream ?

I add freeze dried tart cherries and/or strawberries to banana bread batter. When baked, the fruit plumps up perfectly without making the bread soggy at all. Delicious! I imagine you could use them in muffin batter as well. Might have to add a little extra water if you put too much fruit in.

I wonder if there is a market for freeze drying other peoples’ homegrown produce for them.

That’s a great question. I’m looking to retire in a year or so and have asked the same question. I was thinking about making a hurricane/ disaster type kit too. You know, with a week’s worth of meals for 4? Something like that.

I figure most people will react like @fruitnut and aren’t willing to drop the cash for one but would be willing to have the product.

I’m going to put some feelers out on that one. I’m.in a heavy agriculture area and now where some orchards are not far away. Great idea!!

And @fruitnut. I’m not digging at you. I get it’s a lot of money most people wouldn’t spend. It just seemed like a way to prepare my family and like @ztom added maybe make some side money with.

I also used to dislike freeze dried food. Whats funny is the freeze dried fruit does not last more than a week in my house, even with the current day stuff going on its just so absolutely delicious. Please try some freeze dried raspberries for me as i think you will find them heavenly!

Funny enough i would not have bought one before, i got mine 5 years ago as a promotion for selling a bunch of them and my wife and i were going to use it, take a few pictures and then sell it for 10% off its price which was 2k as a used once machine to help pay for the wife and Is delayed honeymoon at the end of fall (champagne taste beer budget sort of thing). We used this and were able to send my grandma fresh peaches!!! After using it my wife who would like to be more prepared than me personally chose not to sell it and just spend less on our honeymoon. Freeze dryers before this were extremely complicated and kind of hard to use. People make homemade freeze dryers with pressure cookers and igloos full of dry ice which is kind of dangerous. Most of the commercial ones were china made and had lots of parts you had to mess with. This one is actually really well made and mine has stood up to five years of just a bit of use. The insides of it are good parts. However that being said even though harvest right made stuff super easy freeze dryers are not simple per se.

Whats hilarious is I am too cheap to buy a dehydrator and just borrow my aunts and then i freeze dry fruit for her. Before when im doing raspberries or something i do not have enough to fill up the entire unit for i will go buy fresh fruit to freeze dry a full run.

Another neat thing is this thing can take fresh organ meats like pancreas and help make enzymatic medicines from pancreas etc… Anyone using raw meat should do a full scale clean out of the unit before doing fruits and veggies again.