Just wanted to get this topic over in gardening.
I just received my fine line markers from Artline and am very pleased with the price and the ability to write on small popsickle sticks. Not happy with sharpies.

Sharpies fade too fast for me. I tried wooden labels and they rot too fast. For trees and tree grafts, the write-on embossing aluminum tags last for years. I tried making plastic labels by cutting plastic bottles but they fade too fast.

I tried some stainless steel permanent tags with sharpie and those faded. I taped a thin layer of cardboard to those, using aluminum HVAC tape, and wrote on them for the same effect as embossing labels. That works but actually more trouble and more cost than buying the embossing tags.

One version of the HVAC labels. Mine were different but inspired by this. 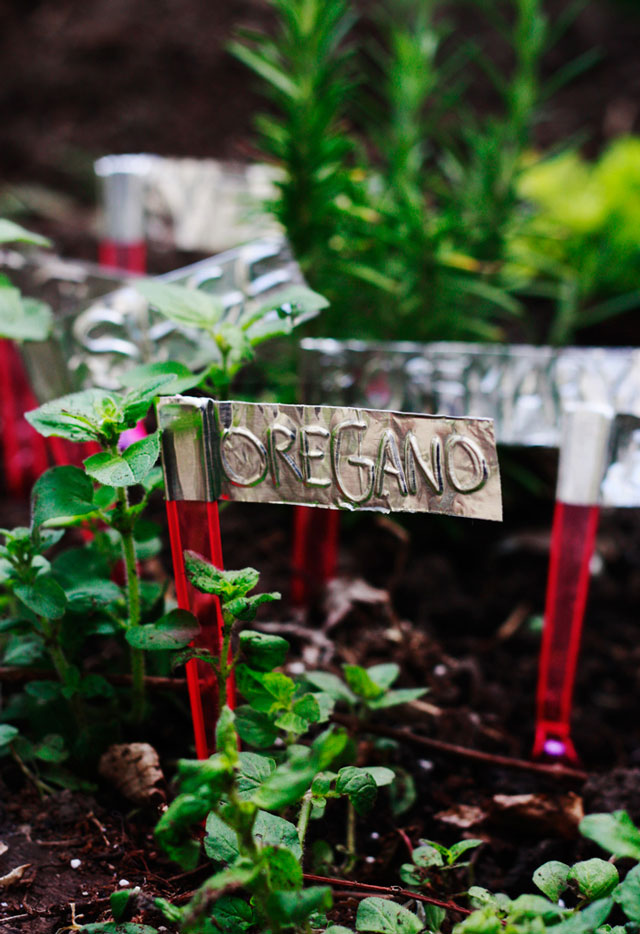 I do not have a green thumb. All summer, I spend ridiculous amounts of time and money on plants for the little garden plot behind my apartment, only to see them whither away in the sun, or be ravaged by colossal city rabbits. Not bunnies—city...

A lot of people like to cut plastic blinds and write on them.

Have you tried writing on markers with soft leaded pencil? I’ve found that soft pencil doesn’t fade the way that markers do.

I’ve recently been trying to think of the best, easiest and most economical method of long term robust labeling. This is what I’ve come up with. It’s the Dymo Tapewriter. They emboss aluminum (and possibly stainless too) metal tape, the apparently also make holes and punch/impress a latch type thing at both ends so a band can be made. The tools sell for relatively cheap on ebay and the aluminum tape is about $8 per roll including shipping (16’ roll).
What do you guys think? 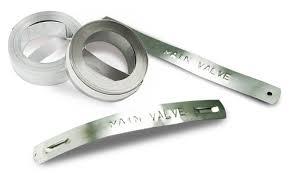 I’ve read that the write on aluminum tags don’t last more than a few years. 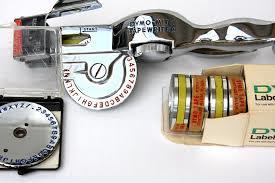 The tapewriter tool can be purchase used on ebay for between $20 - $40 including shipping.

The plastic wrap-around tags aren’t so cheap and don’t last, they also stand out and are unsightly. The metal write-ons are nice, but are .20 each + shipping and reportedly do not last. Making them out of flashing as someone suggested would undoubtedly work well and is a great idea, although time consuming and you could get cut. All plastics are going to eventually degrade especially when cut in small strips and requiring some level of flexibility.

I really think this dymo tapewriter might be the ticket. One 16’ roll could make as many as 40 tags, or 30 nice wrap-arounds large enough to not end up girdling the branch. You can also find stainless wire far cheaper than I’d have thought possible on ebay also…in fact it’s very cheap. This would be if you wanted to hang the strip like a necklace.

I think those tags look very official and long lasting.

So far, it hasn’t seemed to matter what I use, eventually my tags vanish. Then all I know is, “Those trees are Asian plums, That group is apples. Those are peaches.” By then I don’t remember which varieties they are.

If I were a well organized, efficient person, things might be different.

I’m not organized either, but if I could label in a lasting way, maybe I wouldn’t need to be.

Plus the very neat embossed printing would make us appear organized, eh?

appleseed70
Got to say I like that machine real well. For my grafts I have been using soda cans cut into strips and embossed with a ball point pen with a backup of a soft wood like pine. Works good and durable but time consuming. The good part is they are free. Only trouble I have is jealous or ignorant half wits stealing them at night. They usually only bother the ones near the road.

Well, I don’t like the plastic labels because they’re unsightly and I imagine these could be as well…reflecting the sunlight etc
I think I might get one of these because I can envision other uses around the house and whatnot. I think I’ll give them a blast of max flat black to make them blend in a bit better, it dries to the touch in less than 5 min and would probably at least darken the tag for several years. I don’t think anyone would really even see them that way.

I wanted to mention too that shiny things are attractive to crows and raccoons…I’m not joking…my family used to have both as pets and both would haul off anything shiny…raccoon would haul off my grandfathers chromed wrenches while he was working on his bus or cars…crow would collect anything shiny too but he only had one leg and couldn’t lift too much. The crow loved to “collect” the discarded foil wrappers from chewing gum.
Point is, both of these animals (especially raccoons) are quite capable of removing a tag if they had the time to fuss with it long enough…if some day you run over a pile of them with your mower, you’ll know it likely wasn’t a person, but maybe a coon.

I never thought of spraying the metal tags with the flat black. Excellent idea after they have been written on or embossed. I know about the ravens and coons. Raised 2 coons when I was young and they cannot be tamed for inside. The paint will help hide the tags from 2 legged critters also. Farmers are generally getting more problems from people. I heard from ag officials a couple of days ago that in southern Maine people are throwing out the large firecrackers just to see the farm animals jump and run. You might think these are kids doing this but it turns out many are 60-70 year old men. Likely it happens after a few beverages!!! Needless to say fireworks rules are being thought about.

bberry. I have been considering spray painting my white aluminum labels green or brown just so they won’t stand out. Bill

No doubt, the two legged animals are the most destructive and devious of all those in the animal kingdom.

I think a flat green or brown would be better too, I just have access to the max flat black (Krylon) and for a finish that dries so quickly, it really does provide a durable finish. Something like a flat olive drab green would probably be ideal.

I’m going to use copper labels, they should oxidize and not be shiny leaving a nice looking patina. I’ll let my wife writie on them so I can read them. 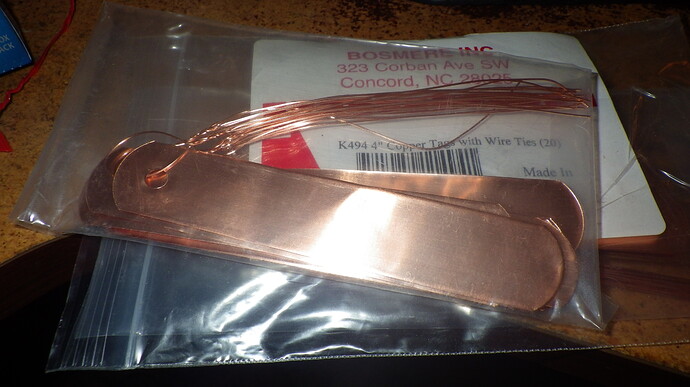 I use one of those Dymo metal embossers. They are aexpensive but I got a good deal. I like it a lot. Mine is black and has metal disks I think, designed for embossing metal.

The stainless tape seems more robust than the aluminum and I wish the hole it punches were a little bigger. I punch that small hole with the tool and then punch a bigger one with a hole punch so I can fit bailing twine through to tie.

I’d like to fine some coated wire to use for tying, then maybe it will fit through that small hole. I just made a few today after I did some bench grafting when I went home for lunch.

Drew,
My metal working background is screaming. I remember that there is a compound that will turn that copper quickly into a camo color. Can’t remember the compound but think it may be an acid mix and maybe it can be found in a hardware store.

Ok…so they do have stainless tape…I thought they might, but everything I saw was aluminum…yeah, I’ll go for the stainless for sure.
Speaking of stainless…you might check into stainless wire. They have it super cheap on ebay in all gauges and very tiny stuff would be more than adequate for the tags, it’s also real easy to work with, not stiff at all. We have spools at work for tying / locking bolts and it is super nice. 10 years later in the weather it looks exactly the same as the day it was pulled off the spool.

Drew…here is a link to solutions for coloring copper that berry was talking about.

It looks like your tags have 4" wires attached…that’s not very much. Those copper tags will last a long, long time, but the wire I’m more skeptical of.
You might want to look into some stainless wire also, since it will be all you can use anyway…other than copper of course.

Wow, some people like to play with chemicals! Reminds me of those old chemistry sets for kids. Boy have times changed! We use to love our chemicals! Thanks for the tips on this and the wires.