It is rough to see 3-4 year old grafted trees that were doing great, get girdled by a rabbit or rodent. Most of my successful trees have ended this way. Frustrating to say the least. I have caged using 1/2” square 48” high tubes made of hardware mesh zip tied to a stake. I think I may have to paint all my trees from now on and/or staple window screen around the trees inside the hardware mesh tubes. I’m trying to stay positive. They haven’t seemed to touch my pears so far. Any advice. I thought I had this rodent protection figured out, I guess not.

I would say getting a cat may help?

Otherwise attract birds of prey by giving them roosts and places to rear young.

The thread on painting trees has been pretty active recently, check there? Some had mentioned adding various bitter /spicy tastes to the paint.

i luckely have no experiance with rodent damage on tree-trunks.

I do however remember a grafting video, where they grafted over the beaver damage. The older tree’s where completly girdled. But they said they could reliable save them by either digging a bit and grafting a few twigs to the rootstock and to the top. Or by grafting a few rootstocks to the top and planting them.

I have never tried this out. But growing a few extra rootstocks or rootstock stoolbed as an insurrance incase the rodents get your tree’s again. Might be worth a try.

worst case scenario you got some spare rootstocks

Gary, are you mowing your fields? We use a rotary cutter (brush hog) and I’m not seeing vole damage. I can’t say why, but so far so good.

Yea I keep em brush hogged. I think I may need to clear a wider area around the tree and mulch it. Either way I think painting and window screen is going to be a must. Tired of having success for 3 or more years then losing the tree to an animal. Plenty of hawks and owls around. It’s typically winter when the damage occurs. Snow melts and there it is.

Gary , ive had alot of loss in the past from voles under the snow over the winter. now i put 6in. pieces of 3in pcv pipe with one end duct taped with block bait in them all around the perimeter of my property. 5 yrs later , no vole damage. i put them out just before the snow flies in late november so no predators get poisoned. they go under ground to die so no animals get poisoned come spring…

Preventive measures ; The upper new damage I likely a rabbit. Window screen can help with that. The lower damage is likely a vole. They love that tall grass around the trunk. I believe voles pick their place for the winter when it starts to frost in the fall. Mowing to the dirt with a weed eater in say October , and raking back all mulch and trimmings in a ~ 3- 4 ft circle to basically bare dirt . And mowing the rest short leaves them little cover. A bucket of the round pea gravel poured ar…

Growing fruit trees in a hay field setting is often different than say a mowed lawn.
Much more habitat for voles and things in tall grass.
Of most important is mowing the whole area as short as possible in late fall. Blowing grass clippings away from the trees at that time. Not leaving any areas of tall grass or piles of cut grass anywhere near trees for a distance of several feet.
The bigger area mowed short the better , in regards of removing habitats for voles .
Think” putting green short” by Halloween /thanksgiving.
May require weed eating to the dirt , and raking debris away from trees . Normally if it’s that short they will go elsewhere for the winter.
Aluminum window screen can often be sourced from a scrap yard at a very reasonable price.
Making tubes at least taller than the graft , or up to the first scaffold. Big enough to allow the tree to grow , ~6 inches or so diameter.
The bottom of the screen Buried in the equivalent of a 5 gallon bucket worth of Pea gravel ,the round stuff ,mounded around the base of the tree , they can not tunnel through pea gravel.
So helps keep them from tunneling around the roots , and keep them out of the screen.
I have used this method on larger orchards with good results.
Installing perches for hawks / Owls can help ,Tall poles with cross bar. Standing dead tall trees around the perimeter Are good perches .
Rabbits usually require hunting with good dogs .
I feel your pain , frustration. !
Main thing is mowing short in the fall. Remove habitat near trees .

Decided to get some paint on these trees. I also bought aluminum window screen for inside my hardware mesh. Hopefully this solves the rabbit/ rodent issue. Now to focus on the 100 other things that can kill my apple trees lol. Some of the trees that were girdled which had a few years to establish themselves, I cut below the area affected in hopes of a sucker or two growing this year that I could graft to. 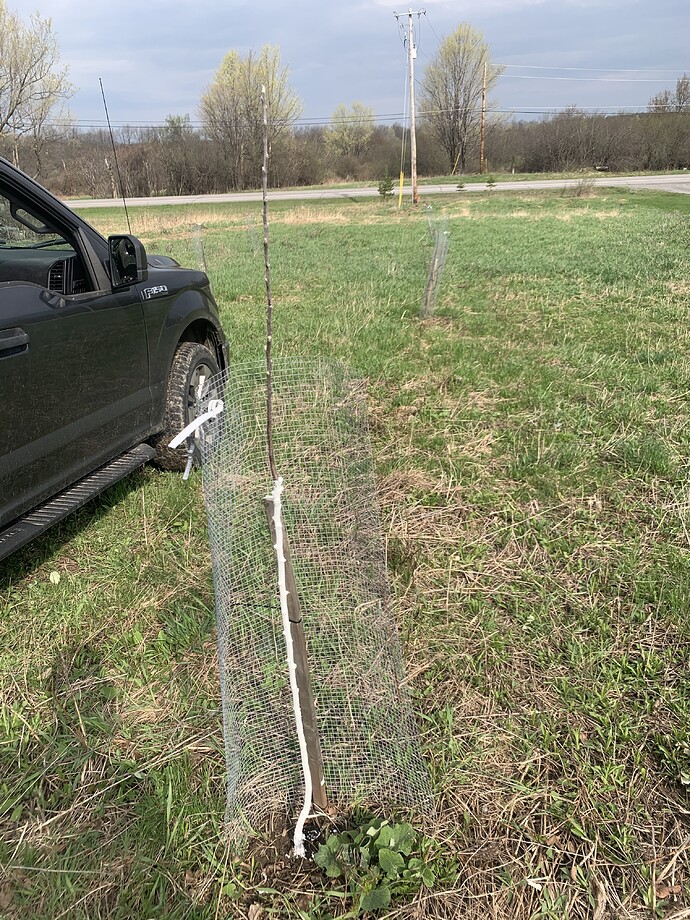 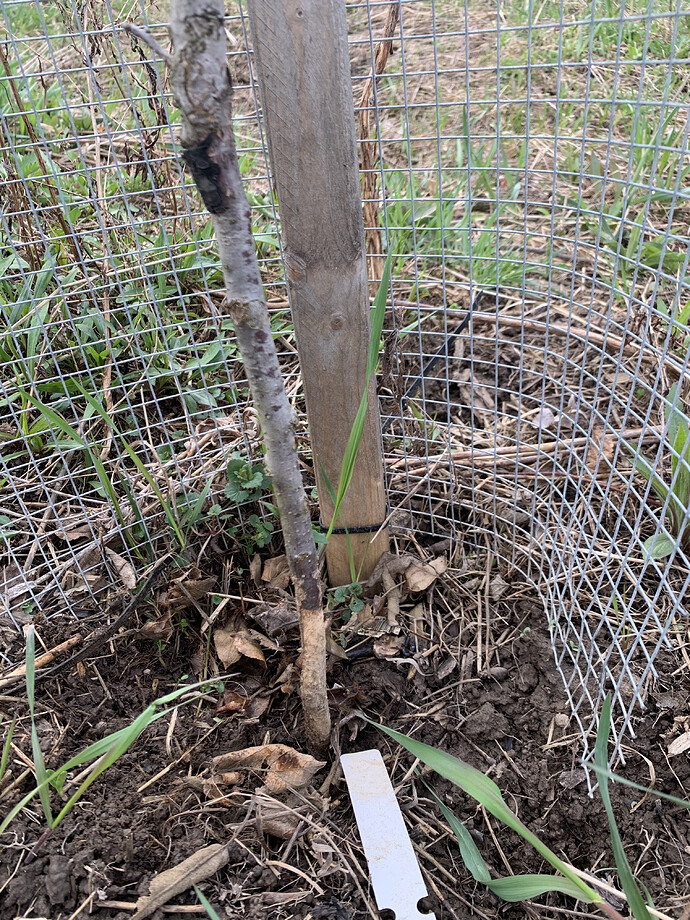 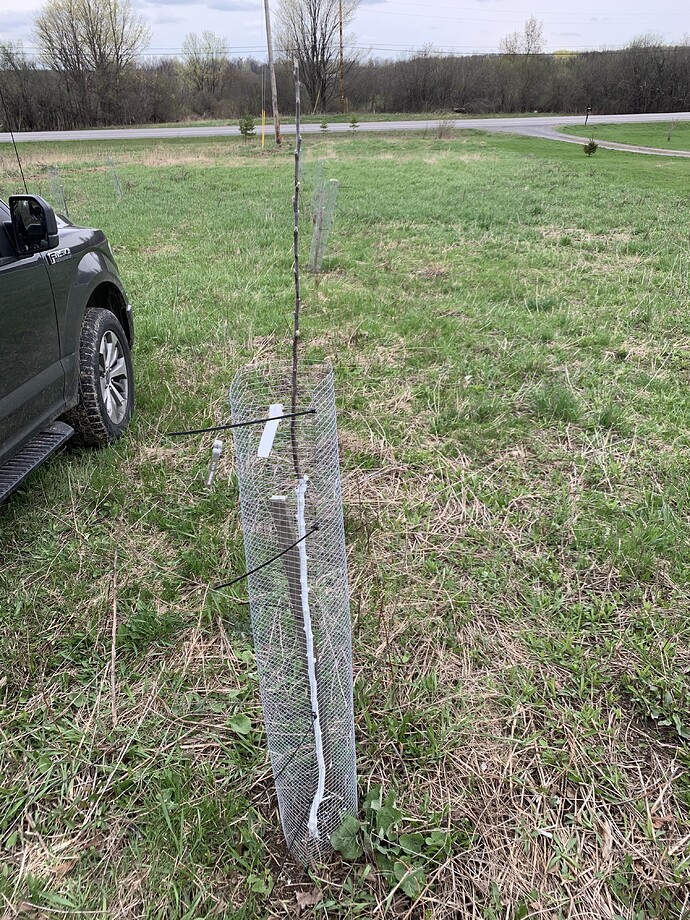 make sure the hardware cloth / screen is right down on the roots or the lil buggers will find a way under it!

My mulberry and other fruits collection Pictures!

Good luck with the voles! I remembered where I saw that trick. It’s buried in this chip budding video at about the 5:30 - 5:45 mark. [Chip Budding Grafting Technique with Dr. Evans]

Jay has been holding out on us with his knowledge! I am putting this in a couple threads I’ve been following for future frustrated tree owners.

What a bummer! Have you ever tried saving them with a bridge graft? Never needed to myself, but could be worth a try.

It’s funny, I saw that sometime last year and thought ‘that’s neat’ and promptly forgot about it because I don’t have a big vole problem here. Though I’ve probably just summoned them with that comment.