Last year we grafted a Goodland apple onto a branch of an older bearing tree, hoping to get an earlier taste before grafting it to its own tree. I’d read differing reports of flavor and hardiness. To my surprise this year it set a fruit. Since the tree and branch were strong and vigorous I let it go. It grew to be a beautiful apple. 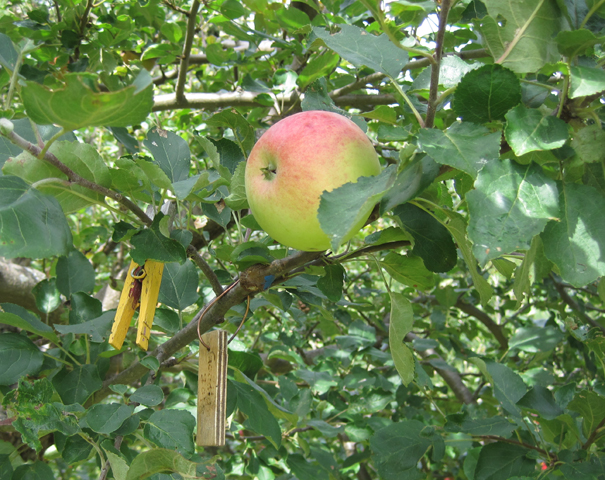 Last week my Goodland dropped. It was pretty exciting because this year was the first to get fruit from any of our apple grafts (also Nutting and an old tree unknown). I set it on the counter and admired it thoroughly. Well, you know how it is with your first one. 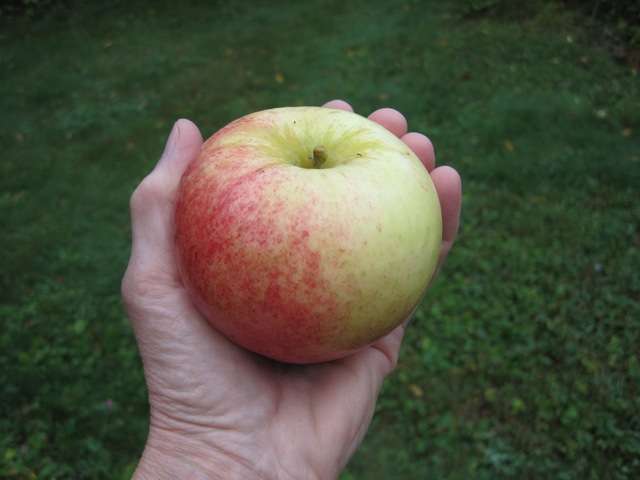 I waited four days then cut it. Nice! Tender crisp, juicy. But … the real test … taste … cut slices, one to Steve, one to me … same reaction from both - Delicious!! We both really like this one. We eeked out eating the rest of the apple over several hours, appreciating every bite. Nothing like having only one to make you really pay attention to it. Skin is tender, flavor sweet with enough tart, with an interesting sweet aftertaste that I’ve never noticed in an apple before. Be nice if it was a bit later maturing but I’ve read it keeps fairly well for some months. I’ve already picked out a seedling to graft to next year. I sure hope future fruit is as good as this first one. 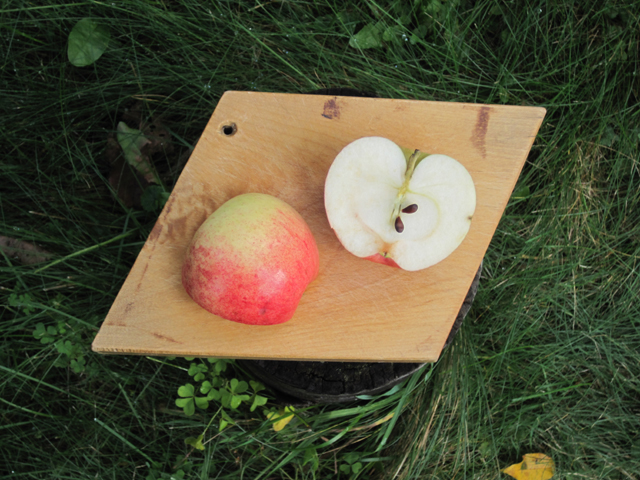 As good as it was it could be even better as your tree gets older. Nothing like the first apple test.

Nice looking apple! I ate one yesterday, though it was smaller than yours. The tree was young, but the Goodland was pretty tasty.

I have a second graft on a branch of a skinny young crab. When it fruits it’ll be interesting to see if there is a size difference. This one was on a large healthy Beacon. Sue

Nice looking big apple. I have been looking to try this apple out as well. I just not have heard of anyone that actually grew one.
Looks like it may be a great choice.

I remember Ursula @northof53 said she removed her Goodland to grow “better” varieties but this first apple was really good for us. Hopefully she will chime in and say why she didn’t like it. I think someone else on the list mentioned growing it, too, @greenthumb21x ? . I think it’s not real common in the US. I got my scion from USDA. Be awhile before I have wood to share but will when I do. Sue

I think it is personal preference on Goodland. It grows well and produces fairly large apples which is a rarity in our area. The people here that grow it love it because the size is impressive and it sure looks wonderful hanging on the tree or in a basket, but it has no flavour. It is plenty juicy, with a thinner skin, a slight astringency but no zip. I tried to make applesauce and pie and the blandness required another apple to be added to the mix.

Maybe it is an environment thing, or maybe it is because when I taste a well ripened Trailman, Sweet 16, Chestnut, or Norkent the Goodland leaves me unimpressed despite it’s larger size.

I have lots of room for apples, but I don’t have much patience for what, in my area, I consider is an underachiever. I am a ruthless culler of those that I dislike LOL, I have no shame in grafting over or cutting out.

How is the Norkent? How is apple for you? I have seen it listed only one place in the last couple of years. I have not know anyone that has actually grown it.
I agree with you. I have no patience for a fruit tree that has inferior tasting fruit or an underachiever. It takes too long to actually get any fruit off the trees.

The Norkent is not mine but a neighbours so my impressions are only on the taste not tree growing habits. My Norkent is 3 years old, flowered this spring but did not set fruit. I find it a good eating apple it has a little bit of pear taste just like my Trailman, apparently they say it stores pretty well into Dec. but loses a little flavour.

I’m interested in Goodland. Nice ripening season for my area. I’ve heard it’s good for northern climates and we are had a short growing season this year with harsh cold and snow. It’s easy to dream of peaches and unicorns but I think I better design with zone 3+ reality in mind. Curious to ponder how many Goldrush I may ever see.