It can handle some apples. I don’t know if I would leave as many as 10. Will you let the central lead fruit and chop it off late in the fall?

What rootstock it is on? I personally won’t let the whole tree carry 10 apples. I don’t know the tendency of this variety. I just try to prevent biennialing, too.

Not sure what rootstock. Lowe’s tree. I’ll try not to be too greedy. (Very hard )

I let young apple trees fruited. The next year they went biennial. It happened to me three times (3 trees, 3 varieties). I told you, I am a slow learner

Biennialing seems to be more with apples, then pears in my experience.

How do you / can you fix biannualed trees?

Thinned aggressively. This theory has worked.

After getting two round of biennialing of my Honey Crisp, I was tired of it. In 2017, I thinned the whole tree aggressively by removing many flower clusters before they had a chance to blooms. Then ,I thinned of many fruitlets. Sometimes the whole clusters. I must have thinned 80+% off flowers and fryitlet off. That year, I had good yield.

After a biennial yesr, the tree will come back full of flowers form because its stored energy. My task this year is to thin aggressively again.

Some apple varieties are more prone to biennialing than the others. My HC, Gold Rush and Crunch A Bunch all have gone biennial.

Also, rootstocks plays a role. I can’t remember but a former member here had his HC produced yearly on the rootstock his tree was on. My HC is likely to be on M111. It does not help in my case.

At some point I read research that concluded that for apple trees with a biennial tendency, the developing seeds signal next years nearby fruit buds to produce fruit or not. I got the impression that even one fruit in a cluster could be enough to make a cluster unproductive the next year and that it’s not the tree somehow keeping track of how many overall apples it made. But it’s been quite some time since I read the article. I wondered if a person had a huge amount of extra time on their hands and could alternately thin fruit clusters around the tree (some would be thinned in an even year and others in odd years)… if you could keep track of them…but then of course a late freeze or something could ruin all the blooms and reset the clock anyway.

I often leave 2 or 3 and next year, will do some cutting.

But, even if 3 buds on your scion pout out shoots…I would pinch the soft wood, but not remove the extra bud growth completely. (What if a worm or a hailstone kills the one you decided to leave?)

Good morning everybody just an upstate with my young grafts. Looking good so far, I am impressed with how many of them are taking as of now. The new growth is very green and very fast growing. How long does it take the scion wood to grow up? And the grafts 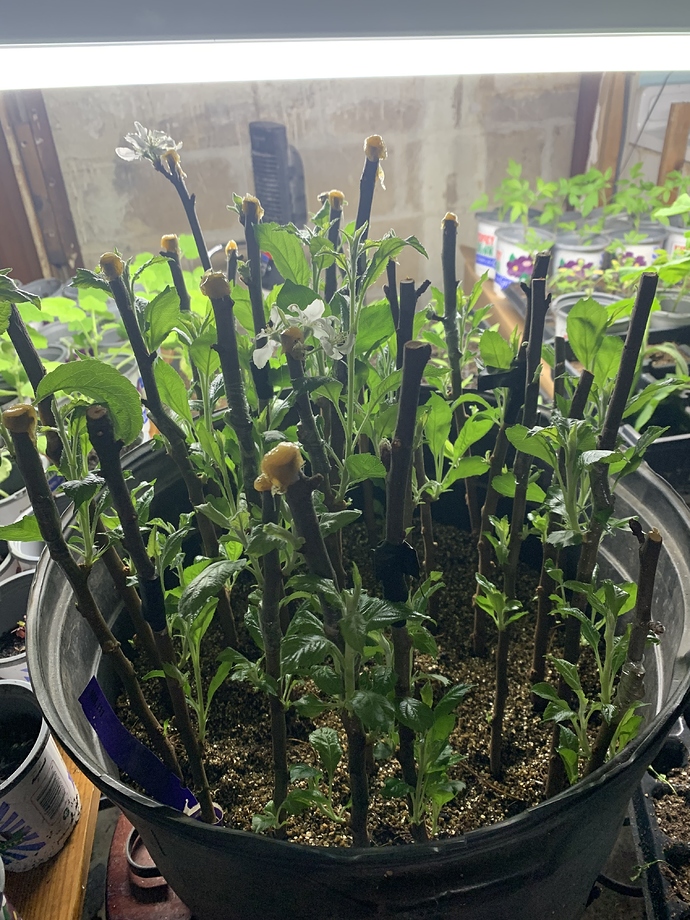 Just make sure you remove all the flowers and growth below the grafts unions. You only want the sap and energy to feed the new grafts only. No issue with the wax. Good luck.

Don’t worry about the wax, but you may have to remove grafting tape as someday it will girdle and cut off circulation if it doesn’t break and fall off within a few months.

Those look like they are in need of sunlight.
Mine have gone through 28 degrees outside and didn’t get harmed three weeks ago.

@BlueBerry great to hear. So I should just bring them outside now? Let them get acclimated to the sun and environment? Should I bring in at night? Or Apple trees can survive?

Luongo43 I don’t know how cold it will get where you are, but keeping them indoors too long unless you have professional lighting can cause more problems than a little frost will.

(Now, if it were going to get to 20 or even 25, you might want to move indoors at night or protect them somehow. But had in-ground apple trees with leaves already when it got down to 14 back in March here in KY and had very little damage to plants, just to the blossom buds.)

They are calling for 29 here Friday night, and I plan to do nothing. And some of mine have a good deal more growth than yours in the picture.

Just don’t move them to a full-sun location and leave them all day on a hot day…for they ill sunburn for sure after having been kept indoors.

@BlueBerry I am located in the Hudson Valley Region of NYS. We are past any projected frost dates but never know. I am thinking about introducing my grafts to the outside elements. Should I do it for only little at a time or just leave them out not in direct sunlight? I plan on loving them in the ground soon in a place I can always check on them for growth. With the failed grafts I plan on attempting to grow out the rootstock and put it in a large planter and at the end of the year cut it down to the base and see if next year new rootstock grow. Anybody have experience with this? Thank you hope all y’all are being safe!

You wwill have to decide based on NY conditions…may freeze or frost this Friday and Saturday nights
Still, some of my apple grafts went through 14 degrees in March and 28 or colder in about 2nd wweek April…and all is well with my containerized outdoor apples…all 200+.

The bigger issue is bringing them from a heated indoor space out to the elements…and in that case, I’d probably bring them in at night if freeze warnings were issued there. (They will be here in KY this weekend).

There should be several videos on YouTube about growwing rootstocks (called stooling). I don’t have a link handy. But, I do have B118 and some other that I am intending to produce some rootstocks on my own in the future, plus seedling trees I can graft to if I desire.

Good Afternoon All,
Hope all is well. What is the best way to train new growth to be the main leader of my apple tree? Hope this question makes sense as I am still readin up and learning about this!! Thanks in advance

I would say to remove everything above that new growth you want to be the central leader–a scion that didn’t take, for instance–or, if you have competing growth, “…nip back laterals to an outward facing bud,” as @AndySmith suggests, and also bend those competing laterals downward to a 45 to 60 degree angle.