I have been having problems with green plum aphids for many years. I don’t spray serious bug killers, and they fly from tree to tree so the tanglefoot doesn’t work on them. I know others have also been battling these guys and I wanted to have a discussion of how the fight goes this season at it progresses and maybe some new ideas will emerge.

I have tried various approaches over the years. First I would wait for the ladybugs to kick in. They eventually would, I would have literally hundreds of ladybug larvae on my leaves. But the level of aphid dew was so high it would drip on the fruits, then it would mold, then it would wreck the fruits. More recently I have been pinching tips when I first would see an outbreak, and then spray oil or soap the next times.

This year they showed up a few days ago. One thing I learned is they have favorite trees, there is one tree in my front orchard and one in the back where they always start out. Not only always in the same trees, but always on the highest shoots. This year rather than pinching those shoots I decided to keep them as a “trap”, I will keep the shoots clean and try to keep clearing them out. So far I did one soap spray, checked back the next day and found a few colonies that survived the soap, and squashed those by hand. Right now I can’t see any aphids.

I expect I may need to keep looking every week or so if I want to keep these guys under control. In past years I have controlled them many times but several weeks later they are back. This time of year I am already spending time thinning as well as pinching the OFM-infected peach shoot tips (a major help to eliminating that problem). Maybe if I keep these highest shoots I will only have a couple places to look and as long as they keep trying to start out in the same spots I can keep them under control.

PS if you don’t have these and you are wondering how aphids could be such a problem, check out the following picture: 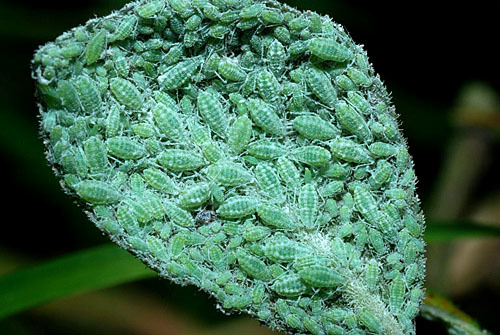 and imagine every leaf on your plum tree is coated like that.

That’s a real fustercluck.I hope that isn’t on one of your trees Scott.The tree they love to be on is a Flavor Grenade of mine.Maybe the leaves taste better,because the fruit is sweeter than most Plums?I don’t know.
I mentioned it briefly to Gary Moulton at the Raintree classes and he said some kind of insecticide may have to used along with oil. Brady

Brady, they are much less interested in any of my Japanese plums, its the Euros they love. Middleburg is their favorite. That leaf is a google image, but mine have looked identical to that.

One thing I meant to mention above is the UC page on this pest,

mentions oil at bloom is good tool, to get the eggs right as they hatch. I have noted this in the past but have not followed through. I am going to make a note to try that next year.

Thanks for that link.It gives me something to go on.Curly Leaf are the ones going after my trees. Brady

That might get me reaching for some serious insecticides! WOW

Wow, that’s bad! I would be running for the sprayer. Yikes! I wonder if dry powders like talcum would kill them, or rock dust. I read it kills ants.

When I get a big batch that shows up, I spray a dripping, drenching everywhere on the bugs and the leaves using a mixture of 8 oz. Zep citrus cleaner ( sold in gallons at Lowe’s) and 24 oz. H2O in a one quart plastic bottle with a somewhat high volume pump screwed in. After a few minutes, all of the aphids that got soaked real good die. I then hose off the whole sprayed area. I am sure that dishwashing soap will do the same thing if mixed a little thick. Or, add a few spoons of dishwashing soap with the citrus for a “better mousetrap”. After a few days you may see some new arrivals, so go with round #2. If the soapy citrus residue hosed off afterwards can cause any problems, I have not noticed anything.

Would that work on apples?

Whatever soft bodied insects that can get smothered by ingesting soapy liquid while breathing in through their outer ‘skin’. Today I sprayed down a batch of young leaf-footed hoppers gathered on a small pomegranate fruit, followed by spraying water over the fruit and nearby leaves a few minutes after they all croaked.

Soap is my main weapon as well for these guys. I use horticultural soap but I don’t think there is much difference.

For apples its often rosy apple aphid and the leaves get all curled. You need to uncurl the leaf with one hand and spray with another - its a slow process. Its almost as easy to just crush them (and thats what I often do).

I found an aphid or two last night. I think my “trap shoots” technique may do some good. I have to inspect the peach shoots for OFM and if I just throw in a look at these plum shoot tips and do a squish or two along with the peach shoot inspection I may be able to keep them at bay. They still have not spread to other trees from their usual favorite trees.

Time for another update on my green plum aphid blog…

The front orchard is doing well, the high shoots are getting no new aphids. One low cluster was heavily infested, I didn’t look/spray low carefully enough. But I got them now.

The rear orchard has quite a few small spots of outbreak, but the ladybugs are finally out in numbers (they also pretty much cleaned up all the rosy apple aphid I had). So, I am hoping I might be able to hit a balance on them. The rosy apple aphid is always eventually controlled by ladybugs, but the green aphids can multiply so rapidly that the ladybugs usually can’t keep up.

Sounds good Scott. Mine are always at the tops. You must really have them bad to be down low. Glade you are getting them under control.

I must get the other kind. they are black and the lady bugs eat them.

Time for an update on the green plum aphid blog… is anyone else having problems with these guys?

On my front orchard, the aphids were occasionally multiplying and I would crush the few leaves by hand. I saw some ladybugs on them at some point and since then they have been completely clean. In the back orchard I have had more aphids, as well as more ladybugs - I found ladybug eggs as well as the alligator stage ladybugs. I have been crushing the aphids when I find them, only on a few leaves at any one time. The aphids started on two trees in back and recently moved to a third tree, but are not moving any further (I have 20 plums in that stand).

So far I am doing better than in past years, when I did a lot of soap spray and tip pruning. The hand crushing lets the ladybugs slowly build up a big enough community to take them on. The time overall it is taking is much less as crushing a few leaves takes a minute and spraying takes a lot of time.

is anyone else having problems with these guys?

They along with powdery mildew is popping up all over the place. I’m spraying my own concoction of dish-washing detergent/water and then at times switching to neem oil. Seems like the detergent spray is leaving some of my leaves with a scorched look. My mixture might be heavy on the detergent side. Just trying to stay even with the critters. Bill

I never had plum disease or insect problems till a few years ago with a new orchard of 3 plums, Satsuma, Petite and Brooks. Infestations of leaf curl aphids followed by mealy aphids have plagued the Petite and Brooks from May all summer but not the Satsuma. Ladybugs or lacewings did not match the explosive infestations of the aphids and dusting with diatomaceous earth did not curb the problem.
Fought back last winter with heavy dormant sprays and this spring aphids appeared later in June not May. I tried to keep up with the growing infestations with alternating neem - insecticidal soap - garlic sprays. Petite seems to tolerate sprays but Brook just about died, leaves turned brown and fell off.

Have not sprayed for 3 weeks and the aphids re back to their usual heavy infestation stage.

I suspect there are some infested trees in the neighborhood that are a source of these pests as they do fly once they colonize an area. I may kill all on the tree but they just fly over and recolonize.

Am thinking about spraying the alternating neem then soap spray regime but washing off the spray after a few hours. Spray early in the morn, 5-6am then wash off before the sun really comes out,

Would be happy hear any comments about this post or progress you have made with this pest.

Just plant a few rose bushes. I have 20+ rose bushes which the previous owners planted. They get coated with aphids every spring but my fruit trees are largely left alone.

Agreed BD. They love my rosa rugosas (only rose I will attempt). I let go a batch of ladybugs three weeks ago and they made a heck of a dent. Hardly an aphid to be seen.

OTOH, one of my new columnar apples has subtle signs of wooly aphids. I used neem and permethrin. Want to head that off at the pass asap. I’m wondering in the off-season if I should bare root these container trees and check for aphids at the roots.

Tom, your mealy aphid experience is similar to what I had for several years. This year has been my first victory over them, the regular monitoring and never letting them get very big let the ladybugs eventually build up a big population and fight them back to even. It required a fair amount of time during the peak infestations. I probably only sprayed twice, the main defense was crushing by hand as soon as a new spot started.

I have been able to ignore them for about the last month, enough ladybugs etc are built up to keep them in check.

Just came back from a month-long vacation to green aphid infestation on Coe’s Golden Drop E.plum. The aphids congregated mostly on top of shoots. Since this is a 2yr old tree so it is still short enough for me to reach up and squished all of them. Saw only one ladybug larva. Bummer.

Nearby Parfume de September and Castleton E. plum have no sign of aphids. I grafted French Improved on both Coe’s and Parfume. The French Improved graft on Coe’s got a few aphids. None on the FI graft on Parfume.

It seems they definitely like Coes, not much Parfume or Castleton (yet).