I got a nice box of champagne mangos (which is a trade name for Ataulfo) so I decided to grow some out from seed, most likely for rootstock (although they appear to be polyembryonic so may grow true from seed) and wanted to document here since others have posted about this recently.

I started by cleaning the seeds as much as possible (this was done about 2 weeks ago). 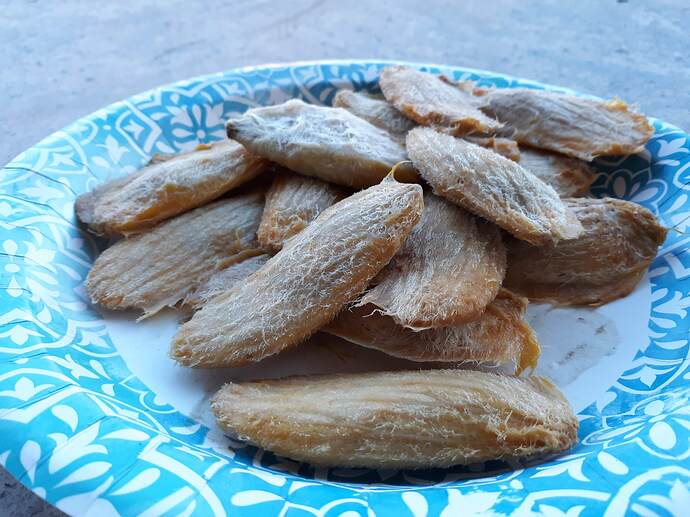 After cleaning up the seeds, I used a pair of scissors to cut just along the edge (right side of the seed on the left compared to a seed that has not been cut open on the right), just enough to open the seam. 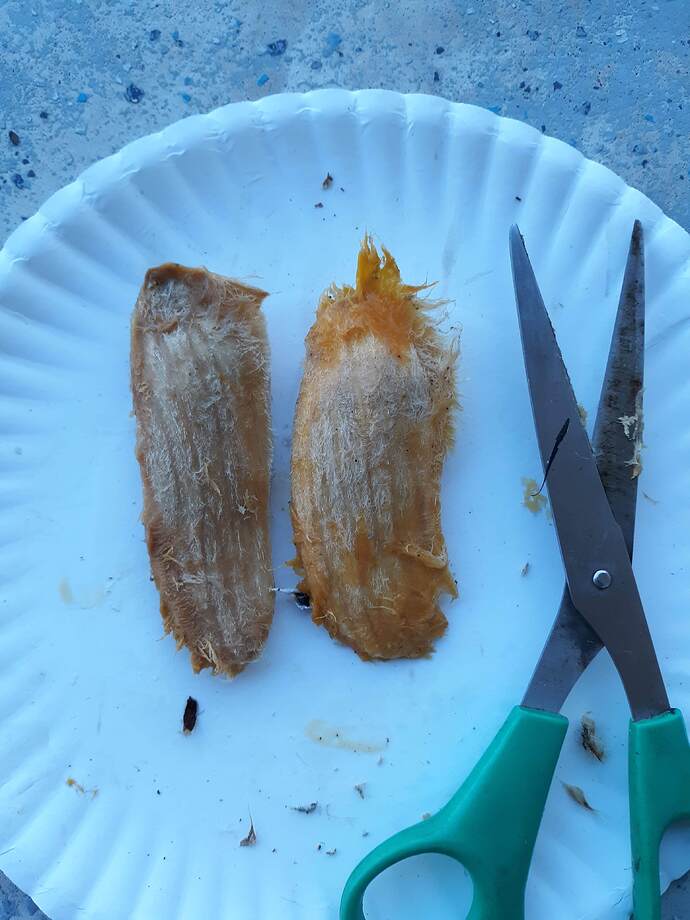 This created a small opening, which can be pried open to expose the embryo inside. 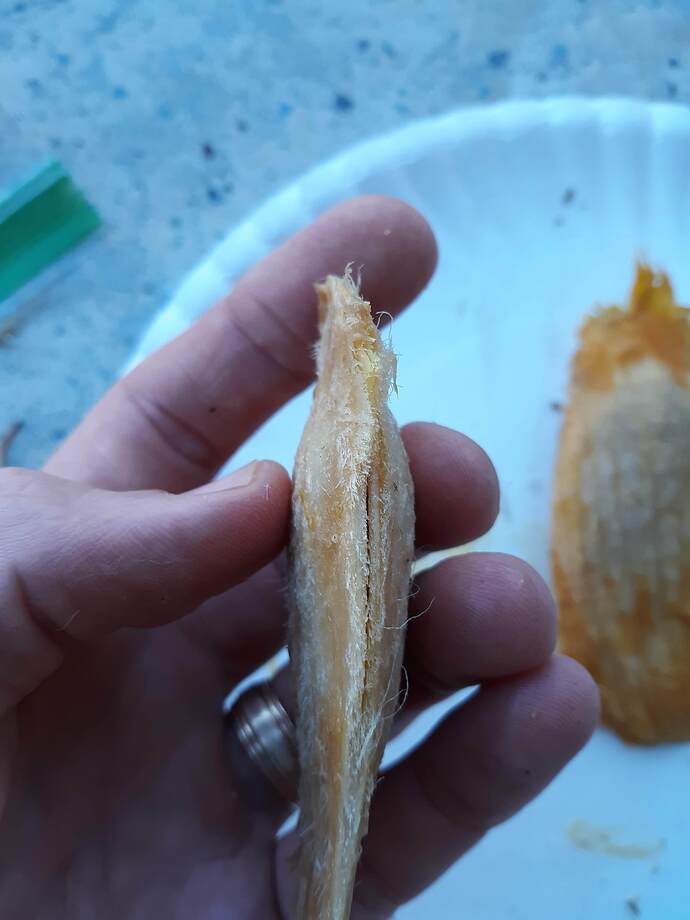 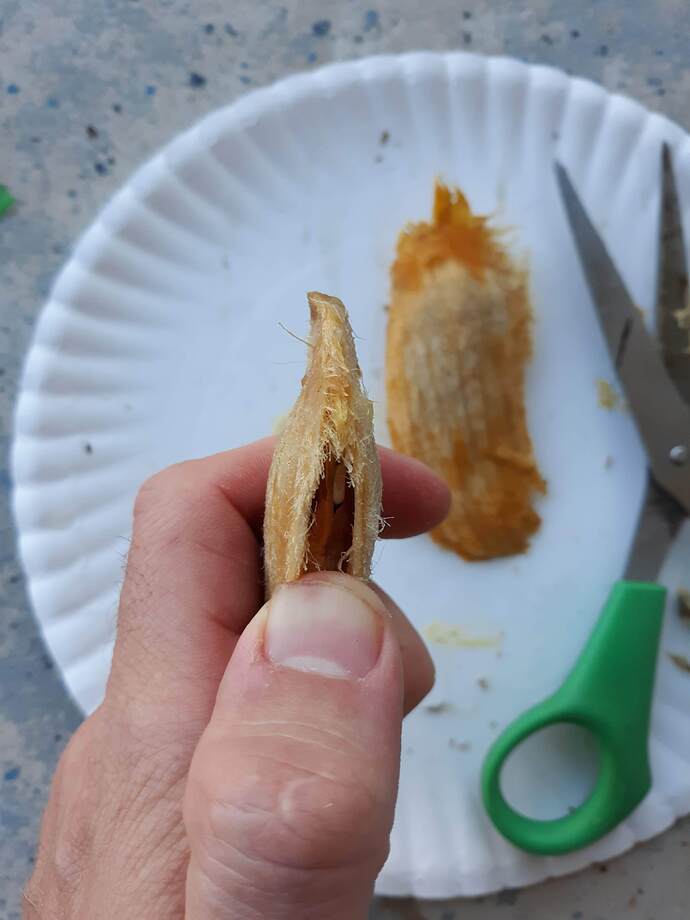 I was able to get quite a few seeds from the box of mangos to try for germination. 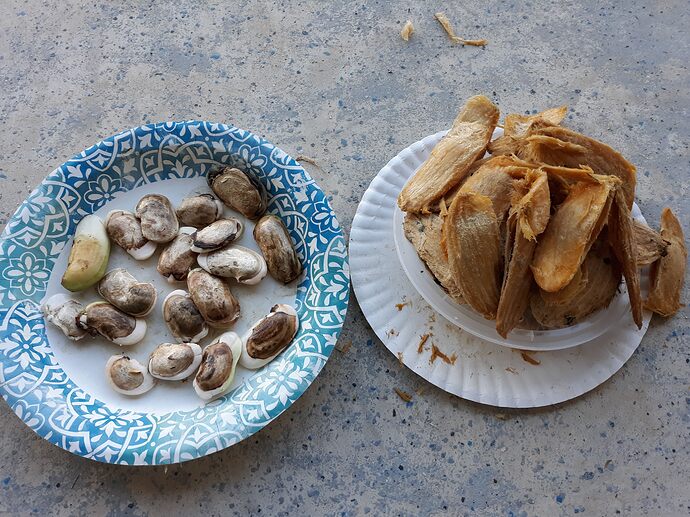 I wanted to monitor the germination and check to see if they were polyembryonic so used a moist paper towel method for germination indoors. This was done with two paper towels inside of sealed carry-out food containers and kept in a warm, dark closet. 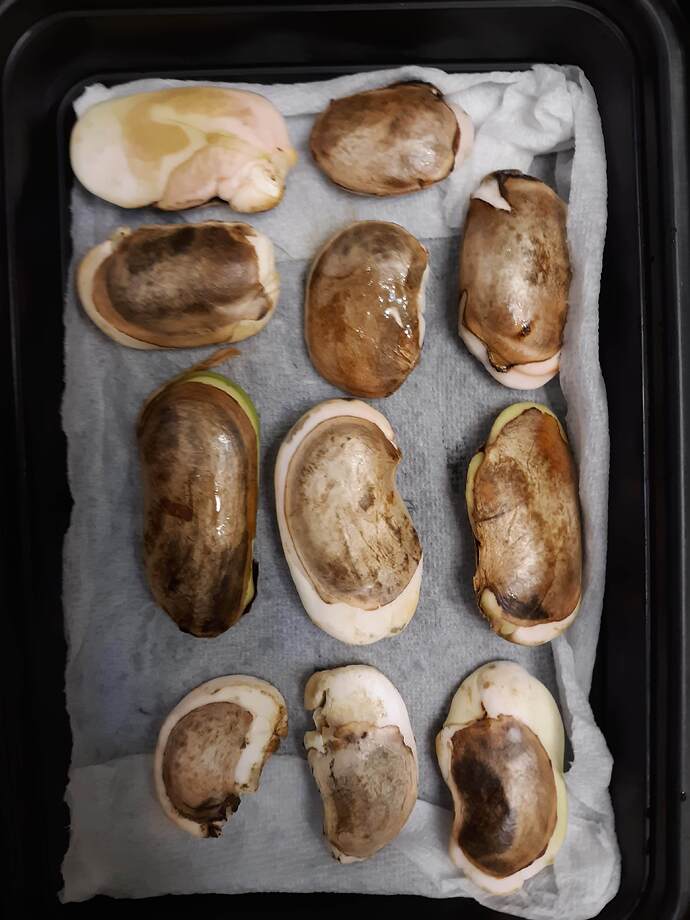 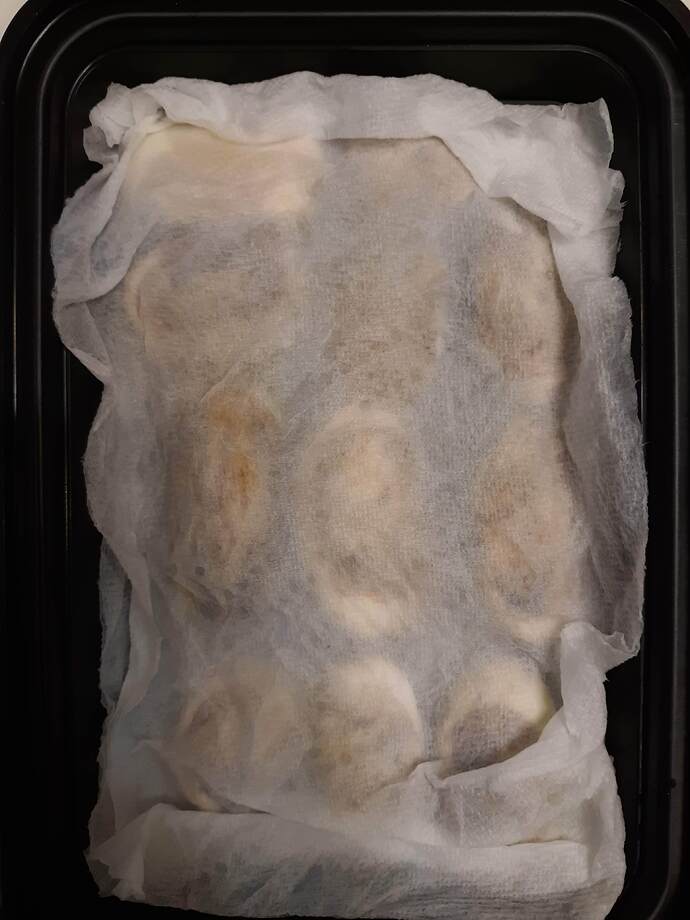 Within 1 week, most of the embryos showed at least two taproots growing and I then transferred these to a container to continue germinating/sprouting. 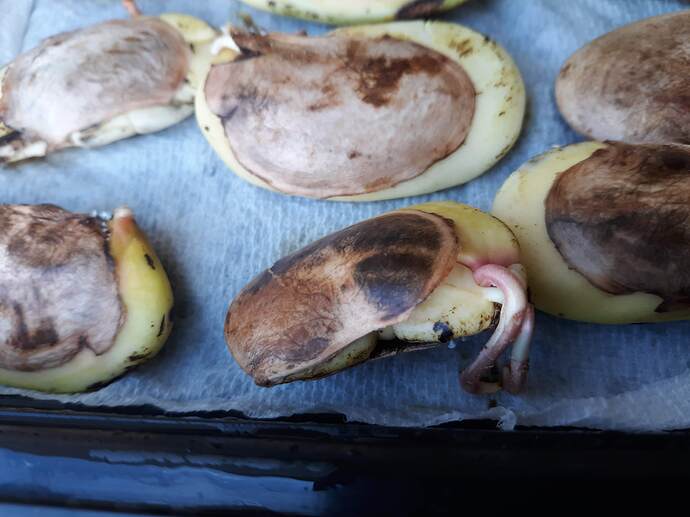 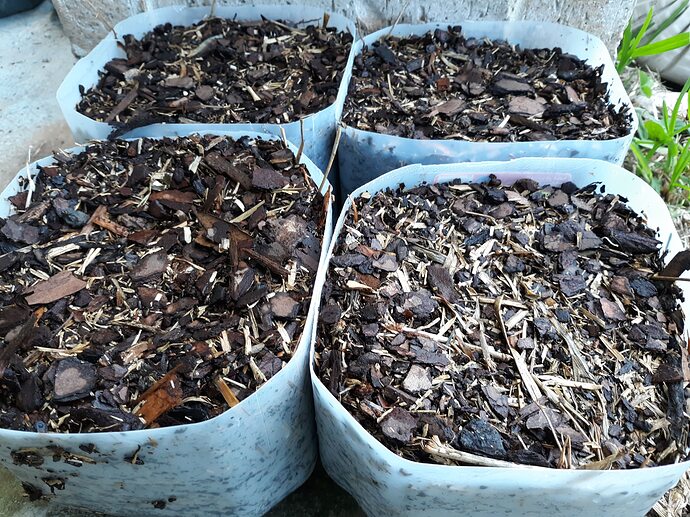 One week later (and about 2 weeks since opening the seeds and starting the germination), I’m seeing a number of mango shoots beginning to emerge. 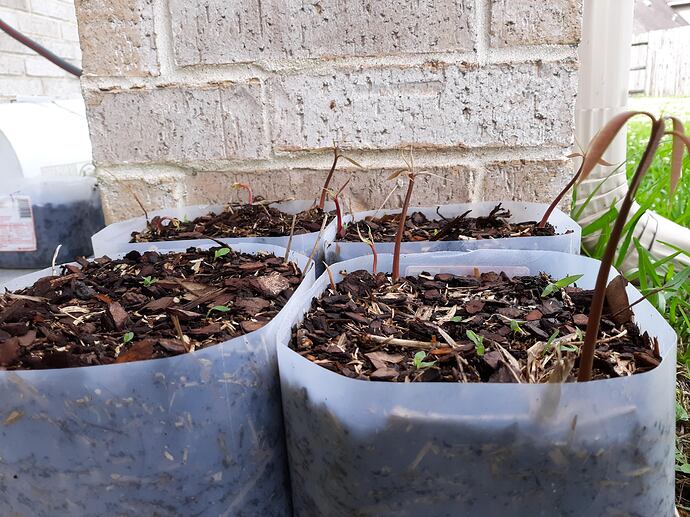 I’ll keep this updated as I continue to see progress. I started a few mangos last year that did OK but it was much later in the summer and they didn’t have a chance to grow well. They did survive in pots over the winter but I’m curious to see if these perform better since they’ll be getting a much earlier start and have a much longer growing season.

Very cool! The seeds on the tray look like a platter of oysters.

Thanks @JinMA, they are definitely cool looking. As large as they are, I’d expect them to have lots of energy to get some significant growth this year so I’m interested to see how they do. I’m in USDA zone 9A and we often have very warm temps through November so they’ll definitely have a long season to put on some growth.

An update a few weeks later. Good germination with a number of seedlings growing pretty rapidly. I’ll probably give them another few weeks before I try to transplant them to individual pots as I still see some just beginning to send a shoot out above the soil line. 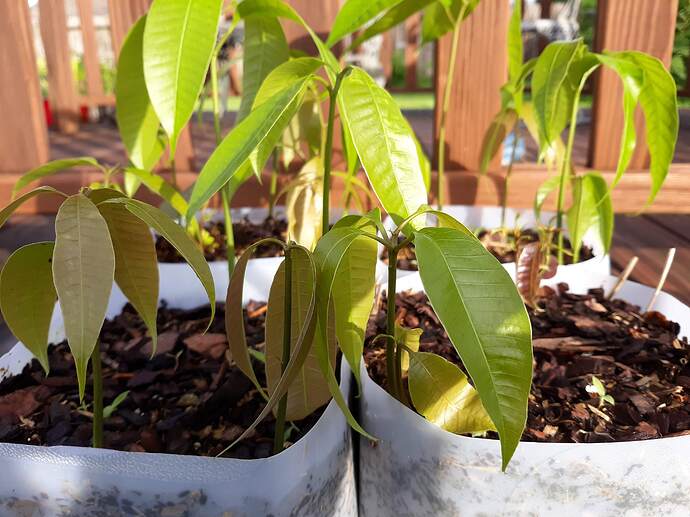 5 1/2 months later and they’ve had some nice growth. I didn’t get a chance to repot early on so I think I’ll wait until early spring. If anyone has scions for trade, I’d love to try grafting next year. 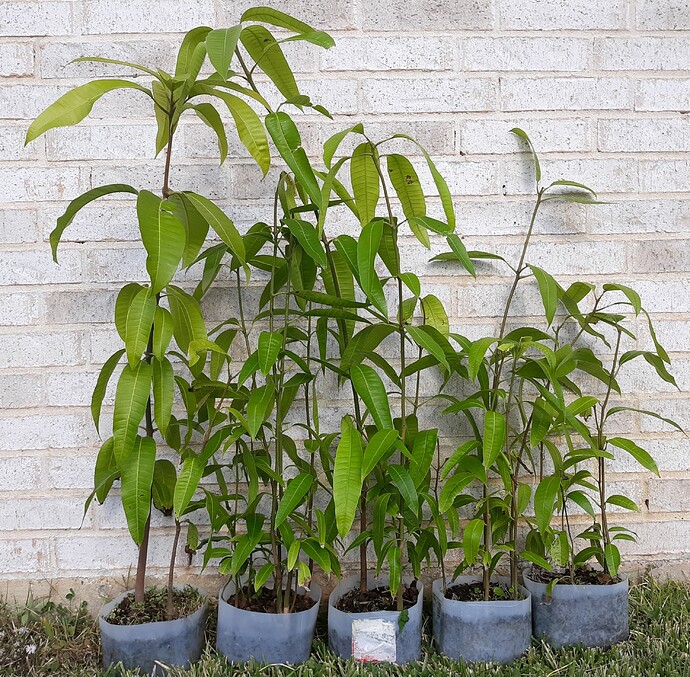 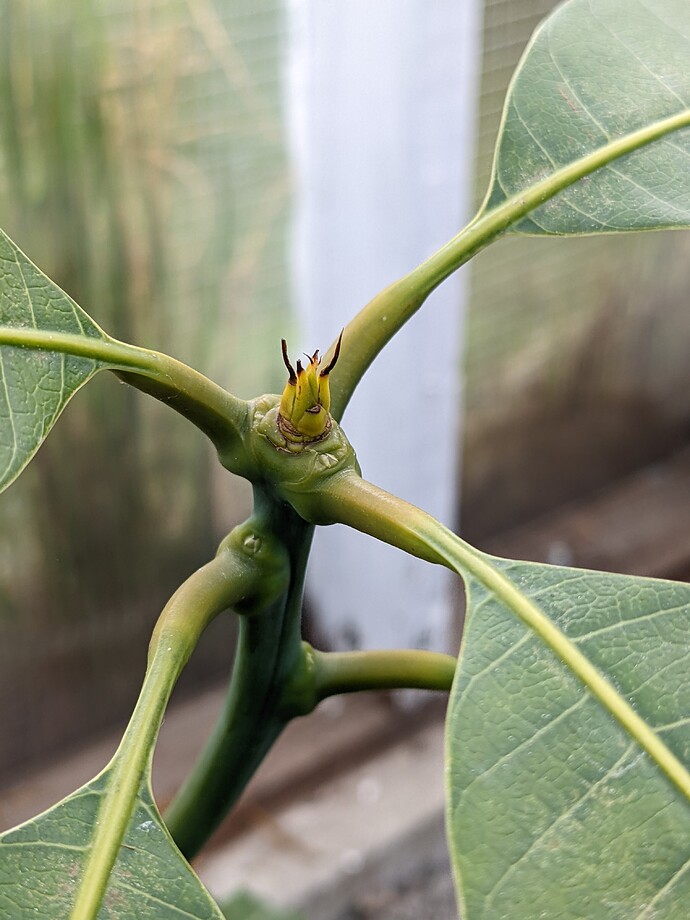 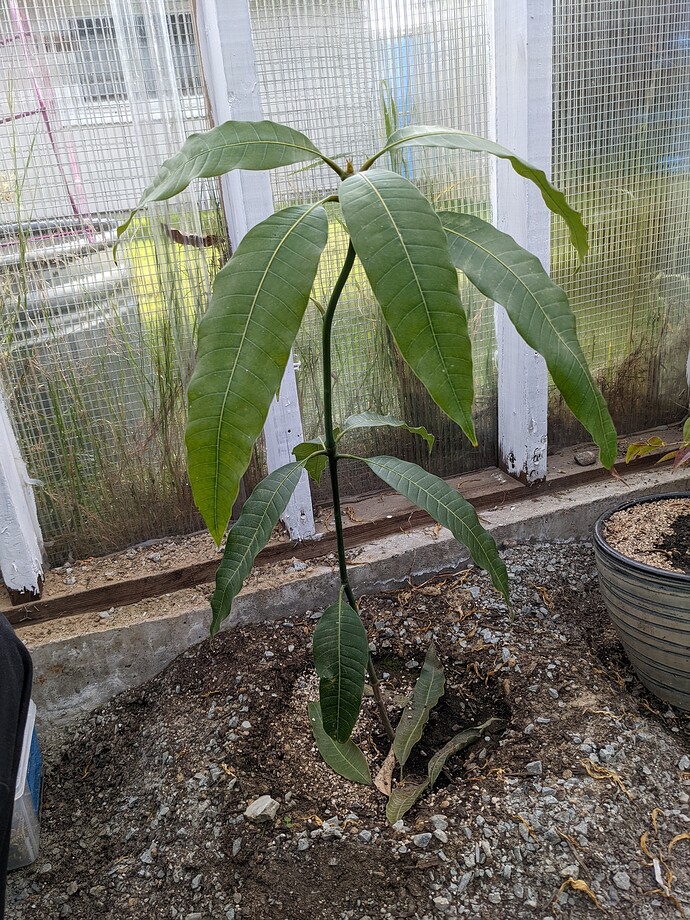 I wonder what temperature thresholds will cause it to start waking up. I trimmed the lowest leaves and have been watering deeply, and it’s in the upper 70s to mid 80s in the greenhouse most days now, but still in the upper 40s to low 50s at night.

I brought them in on nights that were projected to hit mid to low 30s. Most did fine but we had about a week with temps fluctuating close to freezing and I brought them into the garage for that week and one container of seedlings seemed to dry out too much (I forgot about them and didn’t water). Those died off but the others did fine and I still have maybe 15 of varying diameters. I’m hoping to graft them this season. We’ve been in the 70s and 80s for a while now (even a day or two in the low 90s) and mine are just starting to wake up and push growth and our night lows are upper 60s/70s now. 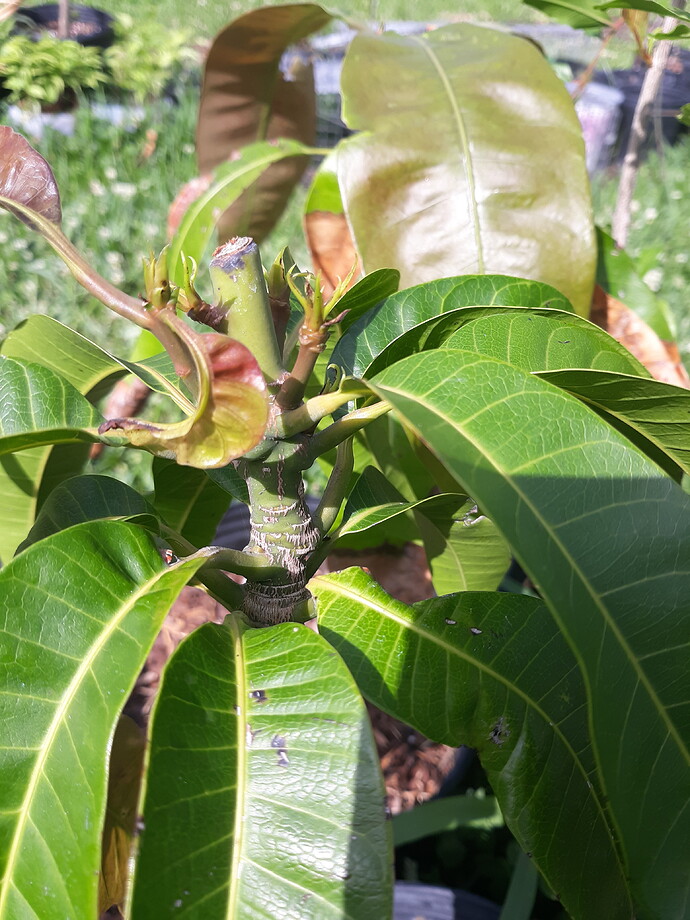 My greenhouse ataulfo seedling is finally starting to wake up this week: 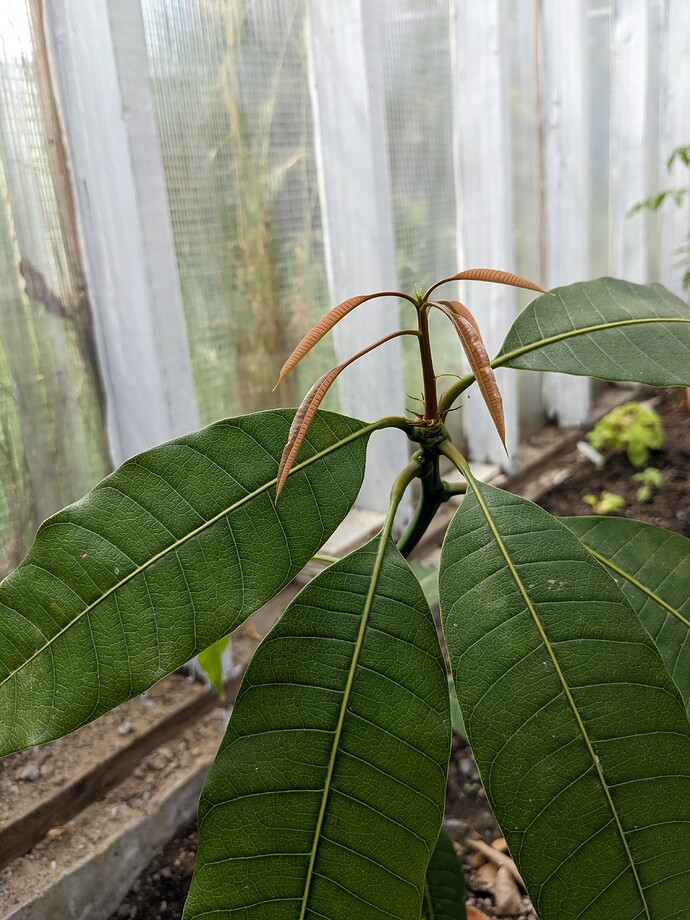 Here’s what the average greenhouse temperature has been like for the week it’s waking up… upper 50s overnight and most days are in the mid-upper 80s in the afternoon, but on cloudy days it’s more like low 70s, so those pull the average down:

I assume yours are already well into their growth for the year @GardenAndGame? I’m thinking maybe it will be many many years to reach fruiting size with my shortened growing season. Though this spring was very unusually cool and overcast, so hopefully it’ll start earlier in future years.

Hi @swincher , yes, mine have been growing pretty well now. We’ve had 80s/90s for almost 2 months now and I’ll be trying to graft some shortly.

I’ll be trying to graft some shortly.

Hope your grafts are doing ok in this heat wave! Assuming you’re impacted by it.

My tree has hardened that first flush but the next bud hasn’t made up its mind about pushing another one: 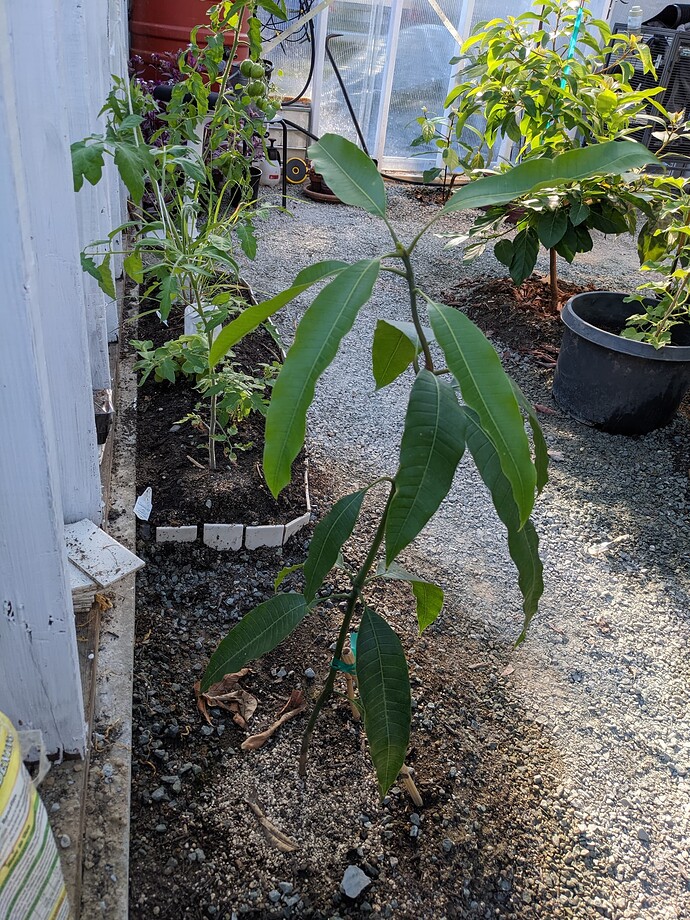 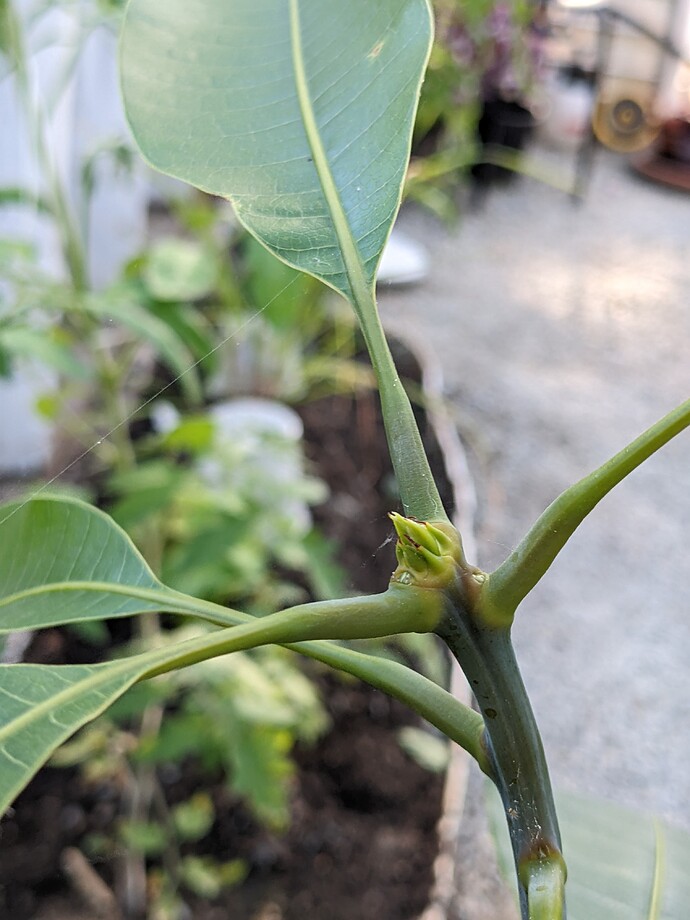 I’m curious what varieties you’re grafting on them. I’m thinking I’ll get scionwood from my brother’s mystery tree in south Florida that has these enormous fruit:

This is not even the biggest one to ripen this year (she said the tree is just starting to ripen now, so it’s a pretty late variety), but clocks in over 3 lbs: 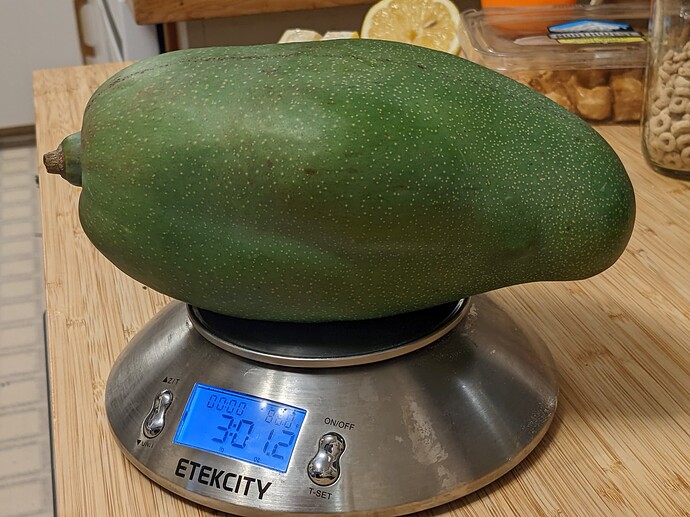 I’ll have to support the fruit probably if it does produce!

I think the shape is wrong, but I’ve looked at hundreds of photos and haven’t found any that seem to match. It has more of a Malaysian or Thai look to me, with an elongated shape, rather than the rounded shape of Keitt. But honestly your guess is as good as mine! It’s probably just a seedling rather than a grafted variety, since it’s a really old tree in a neighborhood that was mostly Haitian and other Caribbean immigrants during the time it would have been planted. It does vaguely resemble the “Madame Francis” variety that’s popular in Haiti, but seems larger and is fiber free. This photo with a few larger than normal ataulfo fruit shows the size and shape pretty well: 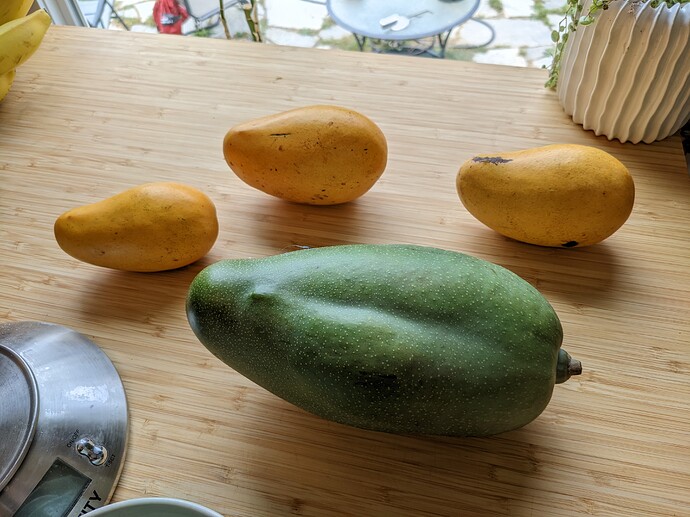 Yum. I was interested jn that blocky appearance and its large size, but with open pollinated trees who knows. I remember in my youth a tree at my neighbors house that produced a fruit named bocado. The skin resisted insect damage, worms, was smaller, rounder, yellow fruit with a gorgeous blush turning to magenta and purples. No fiber, exceptionally sweet and complex flavor and no allergic tingle. I returned in 98 and it had been chopped down:( too close to house

This heat has been brutal for them. 100F days regularly with virtually no rain. I lost most grafts and a quite a few trees. I think there may be a Lemon Zest or two still surviving. I plan to get some out of containers and in ground for next year and do a better job with protecting the young seedlings from the worst of the heat with shade cloth.

Oh no! That’s a shame. Mine is pushing another flush, it’s been in the low 100s in my greenhouse, but I think the weaker filtered sunlight and regular watering have helped it not succumb. A very different greenhouse temperature chart for the last week compared to the one I posted in the spring! 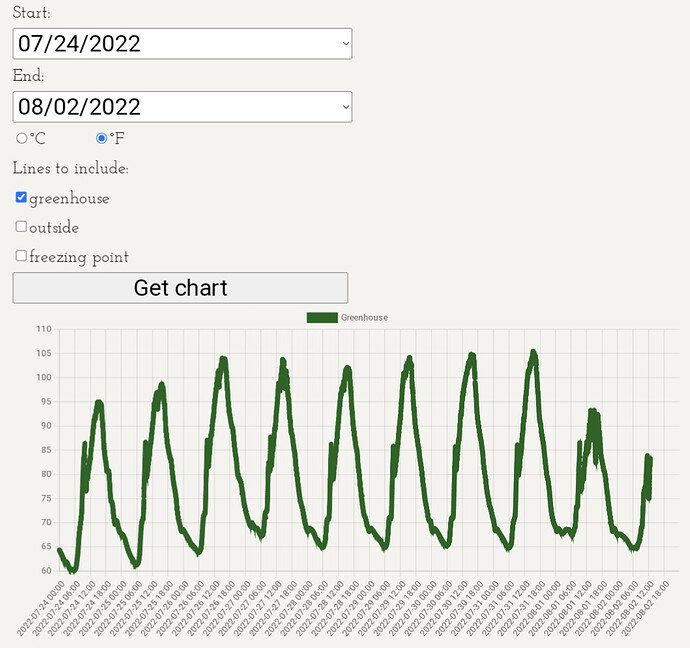