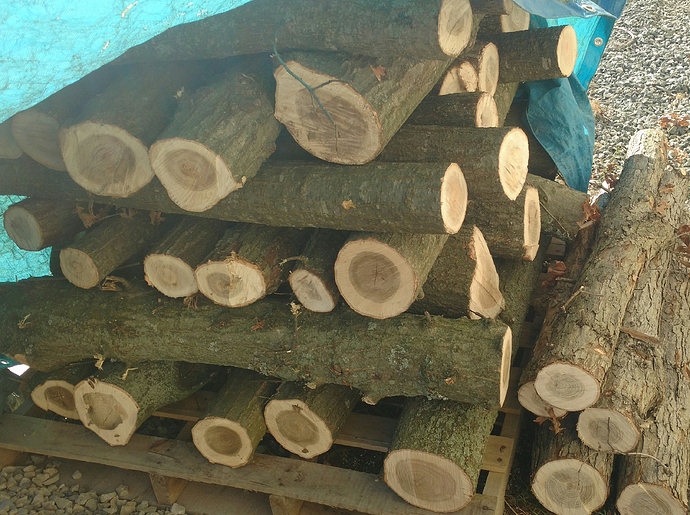 Got my logs ready.

Oh my. More eye candy. Now THAT represents a lot of work.
[PS I was raised in SE PA. Family still there.]

Penn State Extension guides and publications serve as invaluable resources across many industries from animals and livestock to food safety and processing.

I am surprised @Seedy got such large mushrooms from sawdust logs, the shiitake I can buy from local farms are much smaller. Not sure if it is just because they are using smaller “blocks” or they have selected a variety that makes small mushrooms for easier packaging.

Edit: I wrote this whole post thinking that ‘artificial logs’ were like PrestoLogs (sp?).
I don’t think I would ever use any processed wood material for mushroom growing. There are commercial places that grow mushrooms on beds of sawdust which seems like a nightmare to me but I guess they have filtering systems to reduce airborne contaminates, and even then I doubt they would use processed wood products. I’ve never heard of anyone using sawdust logs though I suppose if a person could make them without glue and other chemistry, it could work…again, in a sterile environment, because they have no bark. The sawdust and turnings I used were all from trees, not plywood, etc. I put it in oven bags with water and some additives and ‘baked’ it and tried to keep it sterile then throughout the inoculation process. The bags then stay sealed until they have formed a ‘skin’…well, there is plenty of information available about this. I think making the bags is a lot of trouble and the chances of zero contamination are small. I only did it once; I got zero contamination but I have worked around enough labs and high-level cleanrooms to have a sense of the requirements. I got very big mushrooms using the same mycelium as I use on the logs but the conditions were ideal and…the additives: brewer’s yeast, corn sugar and juice, and some other stuff that I don’t remember, may have helped…ha ha…we’ll never know. I don’t know why the grocery store units are so wimpy…maybe forced flushes too often?
Some fruit tree logs will work but they aren’t normally recommended for the same reason branches from trees aren’t recommended, IIRC; they have too much heartwood compared to sapwood (see photo). I guess the mycelium prefers sapwood…I think it’s more ‘alive.’ Also, try to avoid trees sections with branches; every branch that gets cut off leaves an open door for contamination. I think tree type can affect the mushroom flavor because the years that I grew Shiitake on sweet gum, I thought they were extra tasty/sweet.
I am far from expert, I just got some books. Here’s what looks to be a helpful site:
http://www.hurricaneisland.net/science-for-everyone/2015/3/30/mushroom-cultivation-workshop

Oh, one more thing: my well water is alkaline and Shiitakes prefer an acidic environment. I think some tap water is also alkaline, so a soak tank does provide an opportunity to acidify the water used on the logs. I just use vinegar.

I finally got 'round to reading the pdf from Penn St. and now I get the synthetic ‘log’ thing. Lots of good info in there. different strains can very widely in size; some are supposed to get pretty big (I had several West Wind I believe that were slightly larger than full-size portabellas) and some tend to stay much smaller. I believe the smaller are often favored either for uniformity or a belief in them having better flavor, or perhaps yield, but strains can vary a lot. Fruiting conditions can also affect the sizes.

as for “less care” I had oak logs tucked against the north side of an arbor vitae hedge to keep them from light, just collected the mushrooms whenever they fruited, which was usually about 3x each summer. If I had several strains at the time I could have gotten spring and fall flushes as well, presumably.

The one in the picture is either West Wind or Night Velvet, before that I used a numbered strain from FP on a huge windfall oak out in the woods and they were even bigger. So I guess my experience is still very limited, very happy with the ones I have tried though.

You have me wanting to try this now. I have been reading a lot about it. It seems like spawn would be easy to keep going to make more plugs. I am waiting for some fresh oak to cut or that someone else cut and needs to get rid of. I get anywhere from 20 to 30 trailer loads of wood a year for my outdoor stove. In the meantime I have been trying to inoculate coffee grounds and spent barley grain with portabellas and white buttons. Right now I’m getting box elder and cottonwood from guy who’s clearing a lot, so I need a different job, lol.

You needed another project, right?

Well it’s still winter so I haven’t been doing a whole lot. The last couple of years I spent rooting figs. This year I’m growing crab apples from seed for stock and peaches and plums from my trees. I am toying with the mushrooms and reading about home tissue culturing. I’ll probably still root some cuttings of my figs I grew last year for backups. I want to put all my figs in the ground this year. Once I can ride the lawn tractor around the yard I’l bee busy. The ground is to soft yet. But ya what’s one more project to the list of many!

to the guy who mentioned making more plugs, you can buy dowels cheap. If a guy soaked them in water 2-3 days, until they settle to the bottom, then drain for an hour, you can sterilize them in a pressure cooker in jars, then add 2-3 inoculated dowels into the fresh ones…in a few months you have a whole jar again Just inoculated? they don’t look wet enough IMHO. and, right now they are sensitive to frost, so keep them somewhere sheltered.

I grow all the shitakes my family can eat plus enough to sell one to two hundred quarts per year and have been doing that for about ten years.

I mostly don’t soak my logs. I’m not convinced soaking does anything for quality, larger size, or quantity. What soaking definitely does accomplish is to get fresh mushrooms at times you wouldn’t otherwise get them. Without soaking I typically get one or two large flushes per year plus maybe three or four much smaller flushes. A large flush might be spread out over nearly a week, but that still means that without soaking I have about 4 weeks (figuring 1 week in the refrigerator before they dry out enough not to count as fresh any more) of the year to eat and/or sell almost all my mushrooms. With an optimal soaking schedule (and enough logs) I could theoretically probably turn those 4 weeks into nearly 30. There are substantial costs (including labor) to soaking logs, though. For personal consumption, I think it makes more sense to freeze and dehydrate mushrooms than to try to have fresh shitakes all the time. Shitakes that are sauteed and then frozen seem to be as good out of the freezer as fresh sauteed. I haven’t noticed any difference. Dried shitakes are nice for a lot of uses, too. Another advantage to not soaking and spreading out your harvest over the course of the year but rather taking most of your mushrooms in one or two big flushes is that slugs take less of a toll: they can damage almost all of a small flush but only damage a small percentage of a large flush. If I were soaking logs, I’d probably have to figure out ways to deal pro-actively with slugs, but they’re not enough of a problem to worry about as it is. The only reason I would consider soaking logs would be to sell more mushrooms. I could sell a lot more mushrooms if I had them every week (but I don’t really want to do all the work of growing more mushrooms than I am already even apart from the added work of soaking.) I have done a little soaking on the margins, though. I’ve used a broken chest freezer that I got for free.

I’ve tried growing oysters in the same way I grow shitakes, but I had all but zero success with that. I know several people that grow oysters successfully, but none of them grow them on logs. I probably find a couple bushels or more every year growing wild in the woods, though, so I’m not very motivated to pursue any highly managed ways of growing them. I get most of my oysters during warmer periods in the middle of the winter, especially November-January it seems. I have had good success dragging whole tulip-poplar (yellow-poplar) trees (or the top half of trees after harvesting the saw log) into shady spots (or leaving them where they fall if in a good shady spot already) and then doing nothing more but let them grow oysters all on their own, essentially completely wild. Oysters are prolific enough in my area that that has worked well.

When making more plugs do the plugs need to be hardwood too, or will any spiral wood plug work?

I believe all the main companies use birch dowels.