Any favorite hand pruners? Here’s one a Seymour Smith Snap Cut I use occasionally. It belonged to my grandmother and is over 50 years old. I think they started selling these in the 1930s. Repair parts are still available. 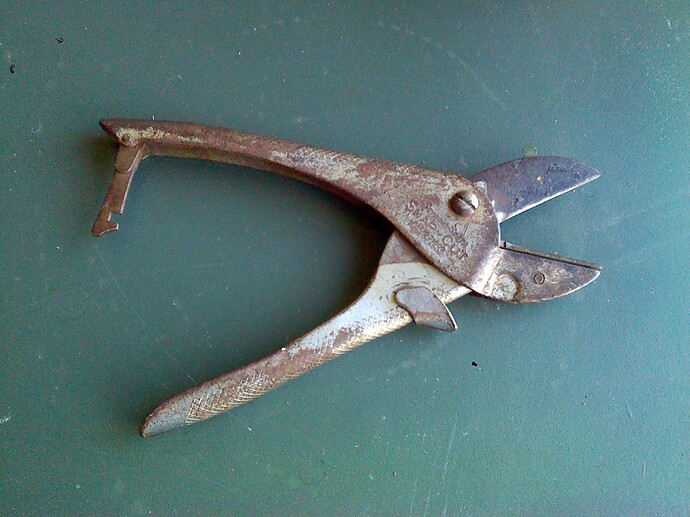 Hi all, H-man (Alan) has a great suggestion for hand clippers. Can’t remember the name of the company though. I hope he replies to this. Time to order a new one. I’ve been using Felco’s of different sized all these years, and they seize up easily (with cleaning and oil). Mrs. G

I use a couple of different Felco bypass pruners, mainly because I’m left-handed, and I can get left-handed pruners from Felco But, they make this nice rotating handle bypass pruner that I particularly like. It gives me a little bit more torque as a gal with less hand strength than a man. Also good for those with arthritis in their hands. This is the left-handed version, but of course there is a right-handed version available

I’ve never had mine “seize up”.

I could be wrong but I hope not…Alan I think recommended ARS pruners. I have a link to their website in my list so I think that is what he was recommending.
ARS pruners

Yeah, I like the ARS VS series . They come in three sizes, so even those with small hands can get the 7" model and get much better leverage than can be had from an over sized pruner.

The blade is made of much harder steel than Felcos so need less frequent sharpening and I prefer how they feel in my hand. I used to get aches in my wrist when I used Felcos but I can prune all day long for six work months in a row and have no issue with the ARS.

The drawback is the ARS can easily accidentally open when in ones pocket which can be dangerous. Good to use a sheath with.

The Seymour may be a sentimental fave, but I don’t recommend a blade and anvil for cutting living wood- the anvil tends to crush wood- that’s why pros use a bypass.

A blade and anvil loppers can work great for clearing brush, though.

I have the VS 9 and like it very much. I have a large hand and it fits it very
nicely and is comfortable to use and easy to sharpen.

Alan, do you use the ARS with rotating handle?

Looks like there are no left-handed ARS bypass pruners. Boo. I’ll stick with my Felcos.

I’ll stick with my Felcos.

Warning to others: use of Felcos may lead to extreme bias towards other tools – including but not limited to considering most other products as “seasonal throw-away tools”.

I’m left handed but prune with both hands. I tend to favor my right hand for hand pruning, switching when it’s convenient- my saw hangs from my left which requires more muscle and coordination. I threw away my Felcos for ARS and have converted many a Felco advocate. It is a better tool by my criteria.

If you don’t prune all day long it doesn’t make that much difference.

One of the first things I learned about the ARS pruners is that they are razor sharp. I cut a few test branches to see how they felt and then, without thought or concern, went to very lightly wipe the bit of residue off the inside face of the blade with my thumb. Surprise! I got to take a trip inside to staunch the paper cut. They taught me to show them respect.

I have reached quickly into my pocked for something else and got the open blade of an ARS pruner instead- more than a paper cut. Some would have gotten stitches but I’m a quick healer and bandaged tightly.

The mechanism that opens the blade with pressing the handles in can make it dangerous as a pocket pruner. Now when I keep it in my pocket I make sure blades are pointing down and I keep them in my less used back pocket.

Felcos certainly have certain design advantages over the ARS VS pruners, they just don’t cut as well, or to me, feel as good in ones hand.

I’m a newbie and I purchased a pair of lowly Corona Hand Bypass Pruners about 5 years ago that still cut through everything like butter. I think I paid $20. I can’t imagine needing anything better. I guess if I used some Felco or ARS pruners I’d think different but can’t justify $60 to replace something that seemingly works perfectly and effortlessly.

Speedster,
If it ain’t broke, don’t fix it.

I use Bahco. They do a Left hand pruner. Pro tool warehouse has them cheaper then anywhere else. Their search isn’t reliable. You may have to try it a couple different ways to hit on what you want.

I do, too, Alan. I think us lefties learn to use both hands quite a bit. So, do you still get a good, close cut using your right handed ARS bypass pruners with your left hand? I’m willing to try them based on a leftie’s recommendation

Are any of these pruners made in the USA?

If not, where are they manufactured?

MS Quilt, Of course I do, as long as the blade pushes against what stays and the hook against what’s ejected.

Bahco gave me a free pair of left handed rotating handle pruners along with a couple saws and other goodies in exchange for some feedback a few years back. The only thing in their line of pruning tools I’m bullish on is their loppers. Their pruners are too heavy for me and not of hard steel like ARS. They are much like Felco without that great and sophisticated Felco gear to hold the anvil to the blade at the perfect tightness. I love that design feature. It is not an adjustment often required but harder to do with an ARS than Felco.

I’m not trying to brag when I speak of how many hours I spend pruning, only emphasizing the fact that this is why I’m so particular about my pruning tools. If you are only managing a few fruit trees this is more about luxury gardening tools and nothing essential to doing the job right. .

Costco sells a great Felco knock-off pair of hand pruners- one like a Felco 8 and the other like 13 for a very cheap price. My wife bought them and loves them. I took the holster for the smaller pruner- it is made out of some kind of woven plastic and keeps a wide opening unlike leather holsters that sag after a while. The only problem is my customers think I buy my pruning tools from Costco when they see the name on my holster. How utterly humiliating! wink

Appleseed, ARS makes their pruning shears in Japan- same origin as Silky saws (but watch out for the cheap Taiwan blades), Felco is Swiss and Bahco French.

Corona is a fine American company. I don’t know if they are having stuff manufactured in China, though.

Thanks, H-Man! Just ordered my new ARS series V7 from Gempler’s. They too are a good company. Mrs. G

What’s the difference between the V series and the VS series?