Hardiness of ‘Arp’ rosemary vs species

I planted an ‘Arp’ rosemary next to a generic seed grown rosemary this spring. ‘Arp’ As variously described as being hearty all the way to 75, the more conservative estimates say zone 6b. Species is generally said to be zone 8. Some say 7, but I don’t really agree.

We hit -2°F a couple weeks ago. We had about a 2” snow cover, And I took a couple shovelfuls of snow to throw a little more insulation on both.

Seedling plant mostly dead, except for the part that was weighted down from the snow and covered, on the right side. 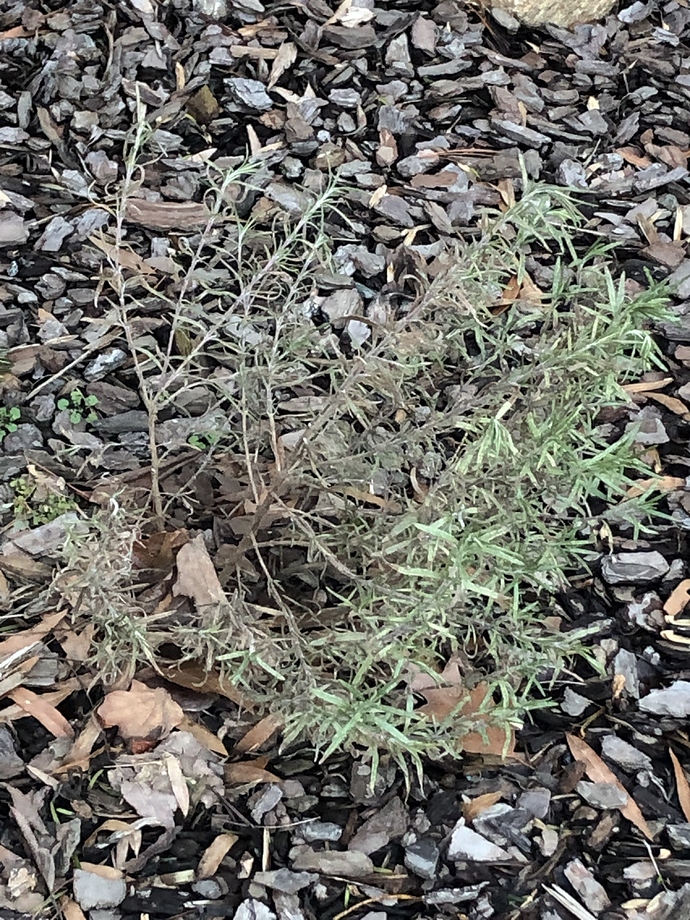 Arp. This did have some snow on it too, but large parts of the plant were still exposed. So it does, to me at least, appear to be noticeably hardier than the species. 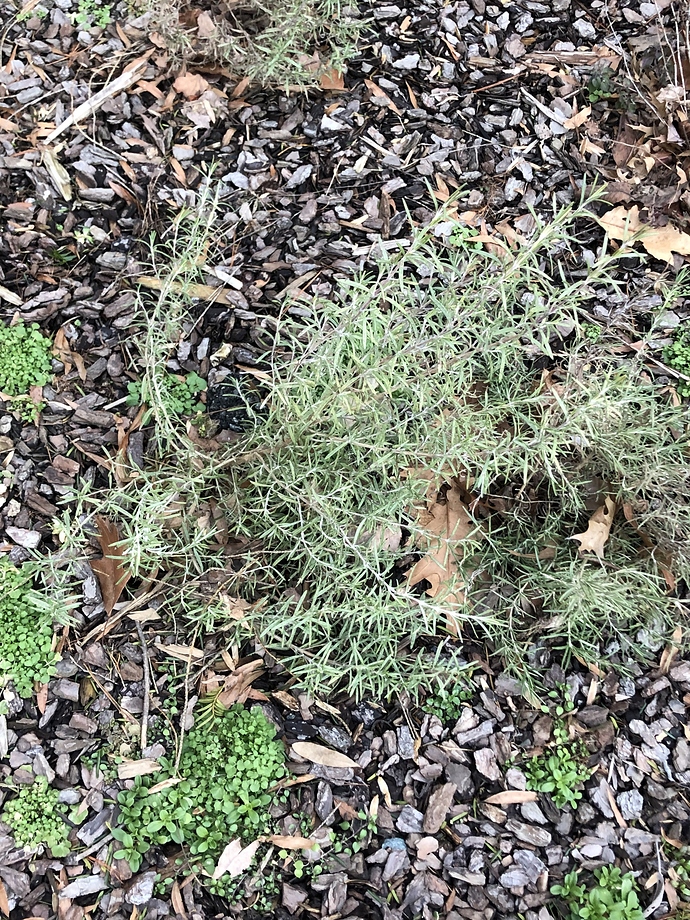 Now I’m confused here, but it looks to me like your Rosemary is an awful lot like my French tarragon, which is quite hardy under snow. You can straighten me out, I hope!

Agreed, I have Arp too, but I bring it indoors. The plant is 5 years old now. It’s very potent rosemary I guess because it is so fresh.

Bryan, did your Arp ultimately survive the winter? Is it still alive? Just curious, because—as I was discussing with @BlueBerry over on another thread—I’m trialing Arp in ground here in 6b Kentucky this winter. Seems hardy so far. Lower 20s/19F didn’t appear to faze it, uncovered at the southern corner of a shed and nestled in a little pile of rocks. We’ll see how it did under mylar with last night’s low of 7.9F, though.

I agree with @Drew51. It’s a very fragrant rosemary. One of the nicest I’ve smelled.

I agree with @Drew51. It’s a very fragrant rosemary. One of the nicest I’ve smelled.

Yes, I still have mine. Indoors now, must be 3 years old now. I lost one 3 years ago, and bought a replacement. Fairly easy to grow.

Mine is alive. It had about 25% dieback last winter, but recovered nicely.

I prefer the taste of Winter Savory (Satureja montana) to rosemary.

Nice. Mine’s definitely got some hope then. Thanks!

Mine is in the ground about three feet from the foundation wall. We got as cold as -2°F last year with only minimal snow cover.

The ability of rosemary to adapt is fascinating. Like thyme, some will take what I view as extreme cold for an herb (-2°F). But unlike thyme there are rosemary that flourish in the Mojave desert with little irrigation and summer temperatures near 120°F.

I put in an Arp this spring after having my two previous bushes die, lets hope it lasts longer! I also planted another hardy variety, Hardy Hill.

Mine is in the ground about three feet from the foundation wall. We got as cold as -2°F last year with only minimal snow cover.

Pretty similar experience here.
I’m not sure what variety I had at my bachelor pad, but bought the plant locally z5b either Lowe’s or a garden center. It was very fragrant and fit the description for arp. Anyway, I planted it a couple feet from the foundation on the south side of my house, it was also sort of in a corner from the attached garage that protruded from the house. It grew great, some years it would die back some but I never did a thing to protect it otherwise. I’m sure the south corner really created a good microenvironment, I had Calla lilies that came back a few years there too but eventually succumb(probably the year the rosemary died back.

But unlike thyme there are rosemary that flourish in the Mojave desert with little irrigation and summer temperatures near 120°F.

I have grown succulents longer than any other plants, and rosemary reminds me of them. It is extremely drought tolerant. It does poorly in my house over winter, but recovers easily in the spring. I like growing it year round. I also grow Mexican oregano year round too. Although my plant looks rough this year. It may not make the winter? Time will tell. 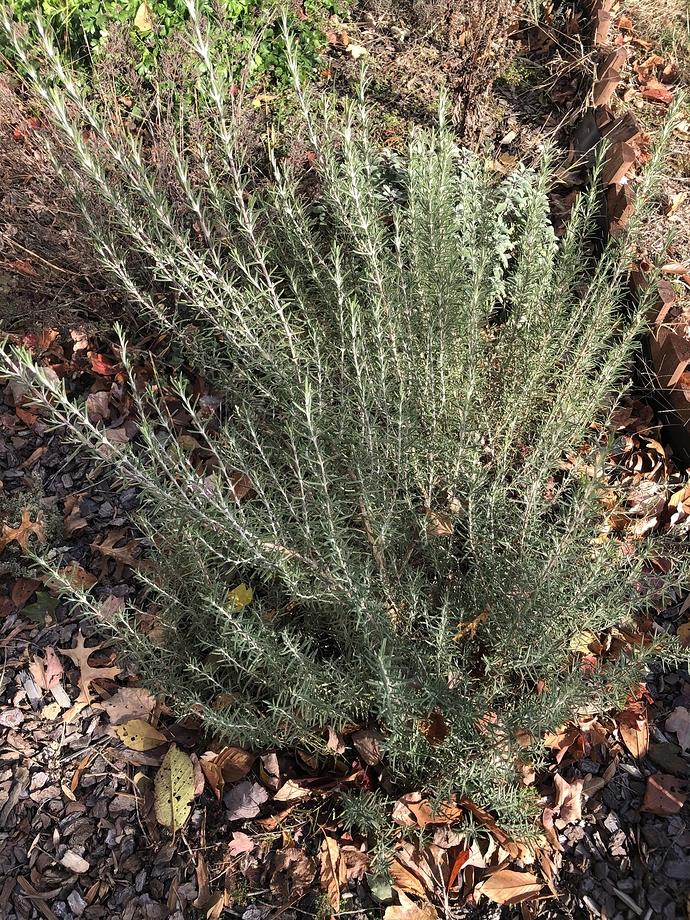 This is the type I grow. I started with one and rooted two others. They grow quickly and have been amazing for my area(z8a). Handles full sun like it’s nothing in summer. Rarely needs watering. Easiest herb I grow next to the mint and perilla. I have a turkey going right now with about 8 sprigs of this rosemary. It’s a keeper for sure.

I’ve trialed just about every Rosemary cultivar available in the trade for cold hardiness. I have consistently found Salem to be the Hardiest with ARP as a very close second. I had a Salem survive 12 years outside in Zone 6b, it grew into a bush about 6’ wide and 4’tall. I will also add that No rosemary will survive here long term out in the open. They will only overwinter long term if placed on a south facing brick or stone wall right against a house, very preferably under an overhang.

This is impressive. I’ve planted three arp plants this spring, and this gives me hope. In the past all my rosemary plants invariably died when brought in for the winter. I couldn’t find Salem plants for sale - will try growinf them from seeds.

Edit: apologies for resurrecting an old thread. Hope your arp made it through another winter.

Hope your arp made it through another winter.

Mine did really well this winter. I just put it outside. 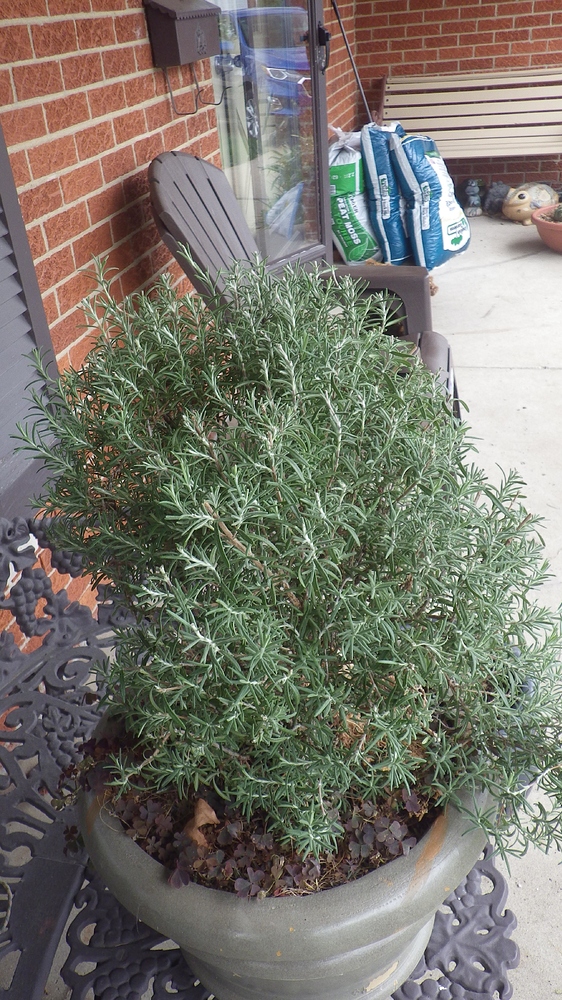