Since planting our orchard in 2012 enough trees are thriving to make us some serious food.

We finished with Redhaven peach canning last week. The amount we put up about doubled since two years ago. (See the topic Canning peaches OUT of the kitchen! ) With three trees I guessed we’d get between 50 and 60 gallons canned…and it was just under 60.
The same stove it set up in a different spot and getting used.

We are working on Gala apples now.

I had more typed but it got lost when I lost signal.

Today we canned some applesauce. I didn’t peel, core, cut or put any through the processor to mash 'em. I washed a few cases of jars though.

I wanted to give credit where it was due and it was hubby and our guys and gals that did this batch.
13 1/2 gallons of apple-sas. 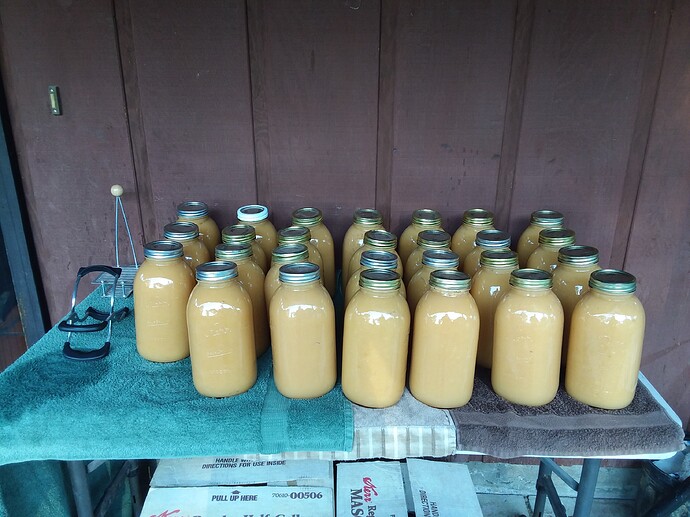 That’s a lot of sauce! My oldest trees are 6 years old. Do you see a big difference between now and a couple of years ago?Picked 20-30 pounds of Gravensteins other day. Could use a few more was wondering if I will bump up production or not.

Are you able to waterbath Apple-sas, or do you have to use a pressure canner? For how long do you process 1/2 gal jars? These look great !

Wow. Many of my trees planted in 2014 aren’t even bearing yet, and just a handful from those that are. For example, I harvested three scrawny Gravensteins this year. I’ve planted five peach trees in my life, but never harvested a peach, since the trees all croaked. Carmine Jewel cherries and pears planted earlier did well, and a modest crop of honeyberries and blueberries.

Our Redhaven peaches doubled production from two years ago. Last year a late freeze thinned tge crop for us and we didnt get many peaches…light crop. Apples a couple years ago thrips were damaging blooms before bloom. = very few apples. Last year we got some…this year many trees are loaded and overset. We sadly lost peach limbs and apple limbs because of not thinning enough. Too many irons in the fire as my gramps would have said.

I am sure your crops will increase…but the longer answer (rabbit trail) above is just explaining that it might not be a steady rate every year as years have variables.

Our Northern Spy planted in 2012 has yet to bloom.
Thankfully some varieties are more precocious.

I have a Northern Spry grafted into another tree, Zestar!, if I recall correctly. Not holding my breath on that one, judging by what is said about their pokiness. Might be a nice surprise in my old(er) age. They are supposed to make really great pies.

Yes we waterbath. Usually boiling fruit like peaches we only do ten minutes on half gallons.
Apple juice we open kettle can and just tip the jars for a few minutes (5 to ten) to sanitize the lids. Boiling temps are beyond pasteurized.