I need help identifying an apple tree that’s on my family’s ranch in the Santa Cruz Mountains on the coast of California.

The tree was probably planted at some point in the mid 1920’s by my great-great grandfather. The tree definitely pre dates the large 3 acre orchard that was planted at some time in the 40s (unfortunately an invasion of voles in the 90s killed most of the trees in that orchard).

I think I have narrowed it down to two possibilities. Either Peasgood Nonsuch or Antonvka. It bears fruit very late in the season, this Thanksgiving I baked a pie with it, the tree was completely full of fruit and full of green leaves.

The valley where it is stays pretty warm and sunny most of the winter getting up to the mid 60s most days in the winter in the sun (warmer than most days during the summer).

The fruit pictured is somewhat of an outlier most apples on the tree are just a little bit larger than a normal apple.

I kind of suspect that it may be a Antonovka because most of the fruit lacks color and I think it makes sense that the tree was planted to be used as rootstock for apples planted later on the property.

The fruit doesn’t taste like much but it makes good pies. 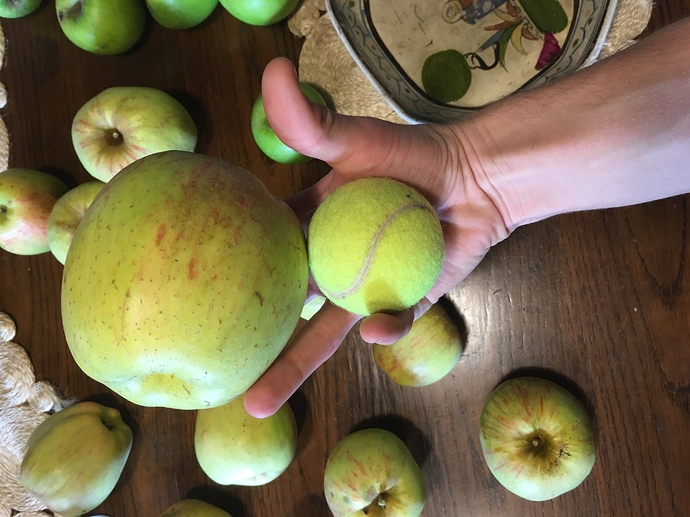 I am from Russia and saw a lot of different Antonovka apples, but I never saw them with stripes. I actually never saw it with red at all - green and yellow, yellow can become intense and almost light orange, but never red strips on top.Though I guess there is more than one Antonovka cultivar. Antonovka is also easily recognized but pretty strong aroma and changing color to brown pretty fast when cut… Also when cooked it doesn’t hold shape at all, it has so much pectin that is never required to add additional pectin to pies with Antonovka. Also Antonovka I know is usually done by mid of October in zone 5, though some apples can stay on the trees and freeze into winter.
After browsing through some Russian Nurseries sites I found thtah there is Antonovka with red, Antonovka Desertnaya (Dessert ) , but is not striped as well, usually one side is reddish. And one more thing. Through all the pictures and actual apples I saw I never saw the small spots, like on the apple you holding. There could be russet on top, but the skin itself is smooth, it has no regular net-like spots.

That really helps. Thanks for the info!

It is not an Antonovka. In California Antonovka would be a summer apple. You should look through late ripening apples. Also the fruits of this size are likely to be triploids.

Ok that makes sense thanks. I’m thinking that must mean it is a Peasgood Nonsuch.

I don’t grow PN but it sounds like they are a much earlier apple and the majority of earlier apples wouldn’t keep until late fall.

Is the tree grafted? If not, could it possibly have been a seed or some other no-name that was planted for rootstock or cider, and it was a happy accident that the apples produced were good for pie?

I read that they were mid season and thought it could be a possibility because we get apples like granny smith or newtown pippin that are mid season apples that are still in their prime in late November to very early December. But maybe they are an earlier apple.

That’s an interesting possibility that I had not considered. I would not be at all surprised if that is true. We have a map showing the varieties that were planted in the big orchard and there were a couple listed as “seedlings” one was name after the wife of the man who planted it, so it seems he had a history of breeding apples. I live about an hour away from where our ranch is so next time I’ll try to check for a graft. I have a picture of the tree itself although its not very good and I can’t really tell from the picture if there is a graft or not but maybe you guys could tell. 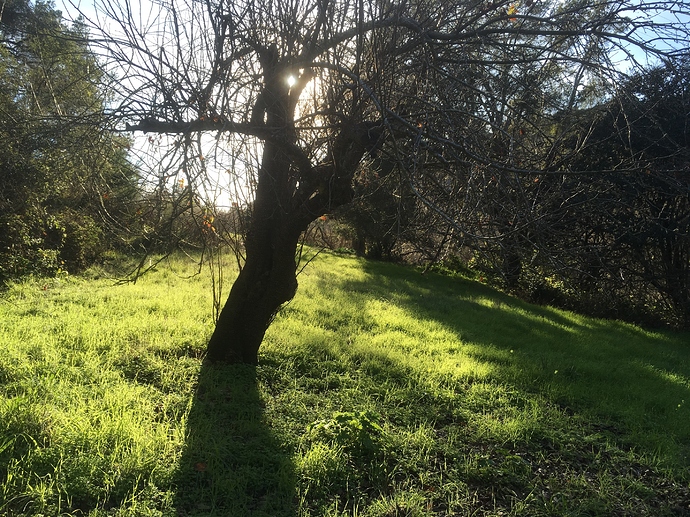 Maybe check out the following possibilities (with online search): Wolf River, Hauer Pippin and Sierra Beauty. The latter two are late ripening CA varieties and WR is a good cooking apple with blah taste otherwise. Maybe a nursery like Trees of Antiquity could help you sort it out. Good luck.

I grow both Peasgood’s Nonsuch and Antonovka and both ripen mid season (September) here in SE Ohio (zone 6b) and neither look like this picture.

It doesn’t have the shape of Wolf River, although its size would match. WR is typically very red and as I recall doesn’t have the “points” like a delicious at the flower end (sorry forget the proper name for those).

But perhaps a cross with Wold River in it, as it seems to share some of its properties.

I grow ‘Hauer Pippin’ and mine do not resemble those in @NoahWillis’ photo–it’s a very colorful apple.

Have you considered Northern Spy? It grows up in Sebastopol looking like yours,is late ripening and good in pies.

Northern Spy is a great suggestion, granted these are pretty yellow compared to how they grow here in Ohio but the shape and striping fit.

Thanks for all the suggestions everyone. I also sent the pictures to someone at Trees of Antiquity to see what they think. I may be able to go down to our ranch in the next couple of days and check and see if it has a graft on it or not because I think there may be a good possibility that it was grown from seedling. 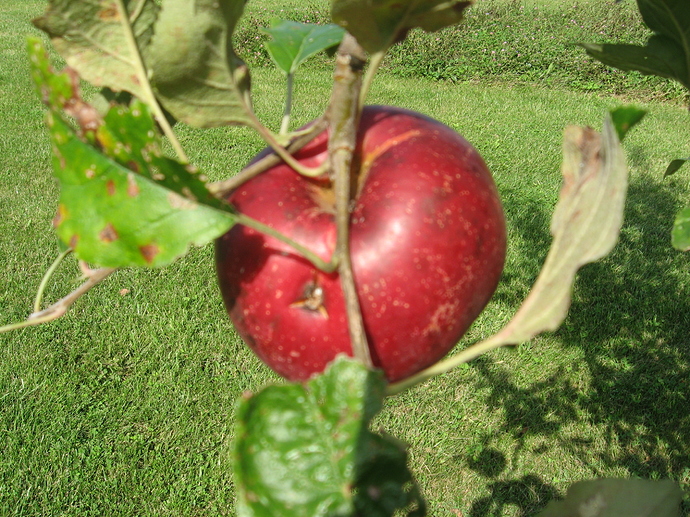 Here is another pic of it from a side view to show the shape of the apple. 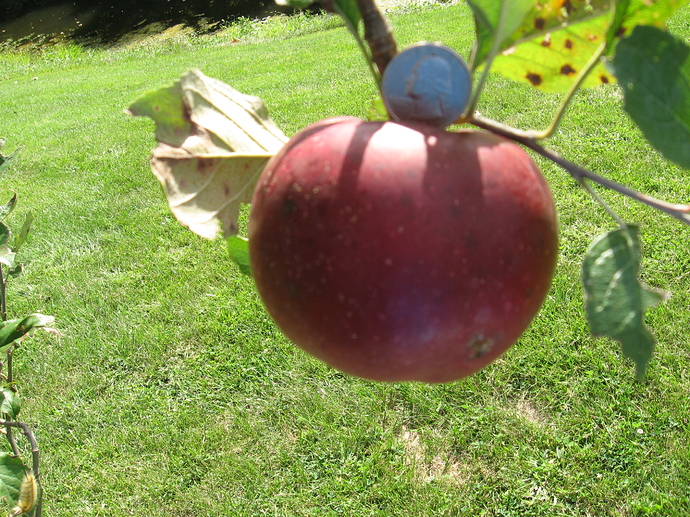 Whatever it is, it is very cool that you have a piece of family heritage. I wish I had gotten scions from my grandfather’s Bing or my family’s volunteer peach that grew from a compost pile pit in the Bay Area.

The person I emailed at Trees of Antiquity seems to think it’s a black gillflower. I think it may well be that. The shape is fairly distinct and it matches. When one of the apples is cut open there are big voids where the seeds are and that matches as well. He explained that the reason why there is not as much color on my apples is to get good color you need warm days and cold nights. We do get warm days but being next to the coast it does not get much below 50 most nights.

Really does not look like Black Gilliflower which is a long shaped apple with bumps and another name for is Sheepnose.