Help with the avocado tree

This avocado tree was part of the home when we moved in 4 years back. We haven’t seen more than 2-3 fruits each season. Granted we pretty much ignored it for the first year and even worse, erratically watered it for the next couple of seasons. Few branches are badly sun burnt

Now that I am taking some interest in the garden this year, I fertilized and watered it more regularly this season. The tree is full of blooms this spring, but I think thats mostly a coincidence and not necessarily the new-found care. 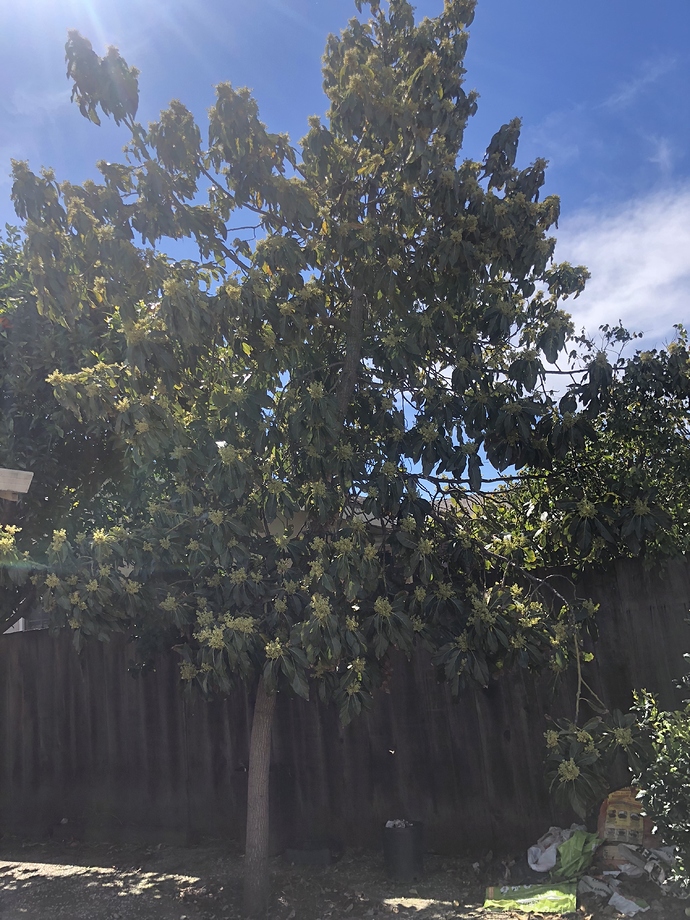 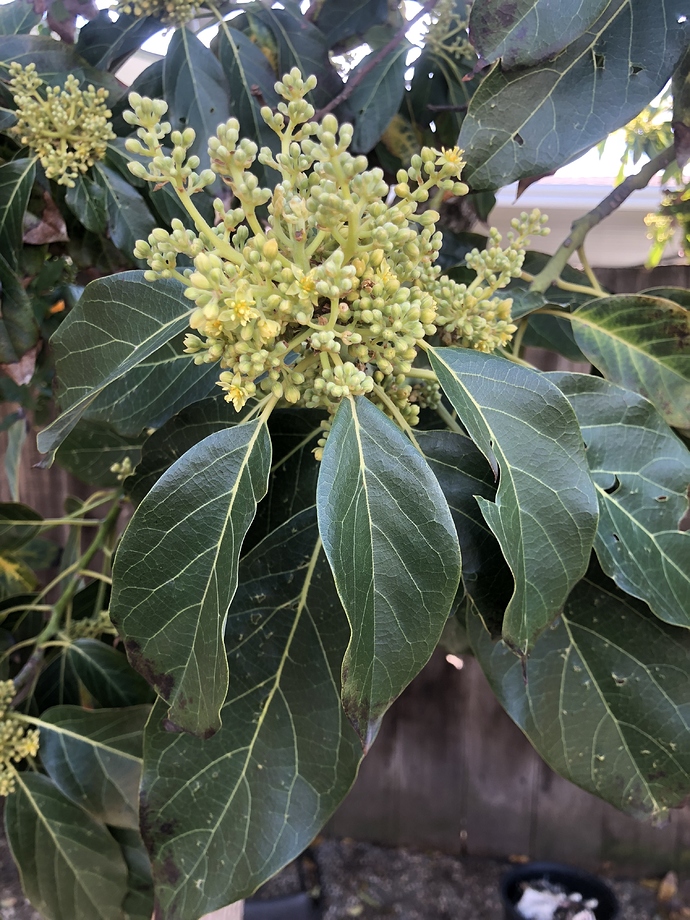 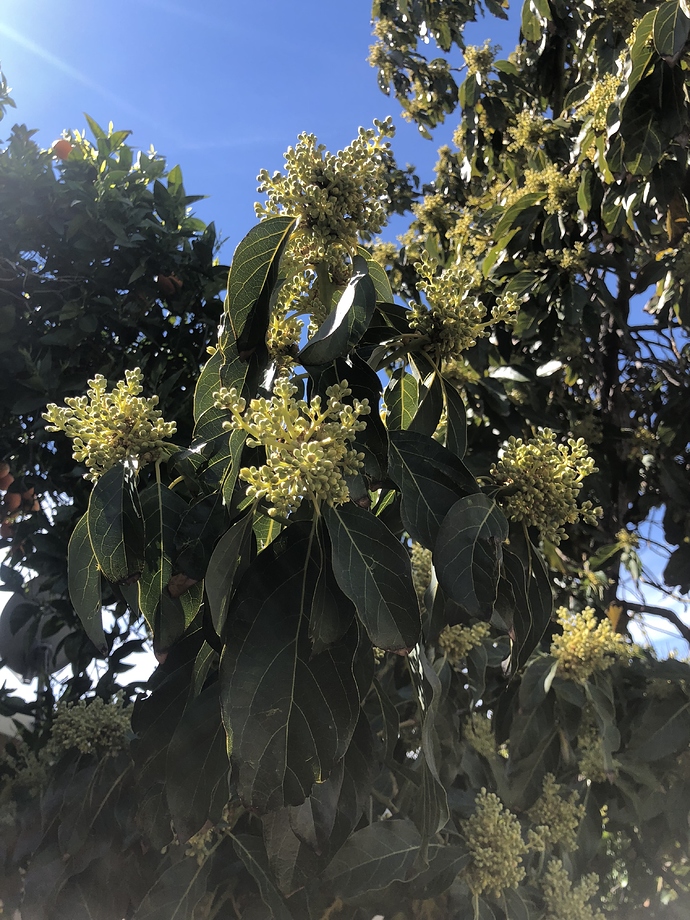 I would like to first identify the variety of this avocado tree. The fruit has thin skin and weirdly “free stone”. I crushed a couple of leaves and they do have anise smell, which makes me think this is a Mexican variety. My initial guess was Fuerte but the tree is not as spreading, so my bet is on Zutano. Is this correct? I am assuming the small number of fruits and them being “free stone” is due to lack of pollination.

does it make sense to graft some Type A variety to improve the pollination/production? Would Reed or Lamb Haas make sense? What is a good time to graft avocado in Northern California (9B)?

I am not an avocado expert, especially in regards to NorCal growing, but since no one has replied, here’s what I know…Cold weather during flowering can impact productivity. Was it particularly cold last time it flowered reducing good production? Or do the bees prefer a nearby citrus tree and ignoring your avocado? That happens around here. Avocado trees are also happier if they have their leaves left on the ground under them or a thick layer of light mulch.

It could be Zutano, but it could be another one of the many Mexican or Guatemalan x Mexican varieties. Have you ruled out Bacon? There is also the possibility you have a seedling tree.

Any idea if the previous homeowner was into gardening or in CRFG? If so, there are many more possibilities as to an ID, rather than the half dozen common Mexican varieties available in retail. Here is UCANR’s extensive database of varieties and their traits. Avocado Varieties
They have an advanced search option to select by trait. That website also has links to care instructions.

More criteria for helping rule out varieties includes: What time of year is the fruit ready? Fruit size in ounces and shape (is it ovid, round, or pear?), large seed or small? Is it easy to peel? Is the flesh pale? Is the skin green or black or kind of reddish when ripe? Bumpy or smooth? Color of new growth of leaves?

If you decide to graft it, but if you aren’t 100% sure its a B type, I would recommend grafting in both an A and a B variety. If frost isn’t a problem in your location, you have lots of choices. Here in SoCal, budwood from the South Coast Resereach station is available in late January at the OC CRFG scion exchange. Usually there are 30+ to choose from.

Thanks for the details. I wanted to get little more data before replying here. To answer some of your questions above

Was it particularly cold last time it flowered reducing good production? I don’t think so, but I haven’t tracked it well either

do the bees prefer a nearby citrus tree and ignoring your avocado? This is definitely possible. The blooms on both the citrus and avocado were much more pronounced this year. I do see more bees on the orange tree but I think Avocado flowers are also pollinated by other insects. Not sure what is the name of the tiny ones that seem to swarm each bud

Grafting both A and B is not a bad idea. I will try to hunt for some scions locally. I am thinking of grafting Reed and Sharwil varieties. The latter may be hard to find. Let me know if anyone can help here

Quick update on the current status - there were a few windy days which blew most of the flowers away. Just before that I sprayed some of the buds on a section of the tree with a mix of honey and water - was suggested by someone on Youtube. I am not sure I really believe this but wanted to test it out. I do see some fruitlets in many of the branches now, not only on the honey sprayed portion. If these do really hold until maturity, this is the biggest fruit set I have seen in 3 years on this tree 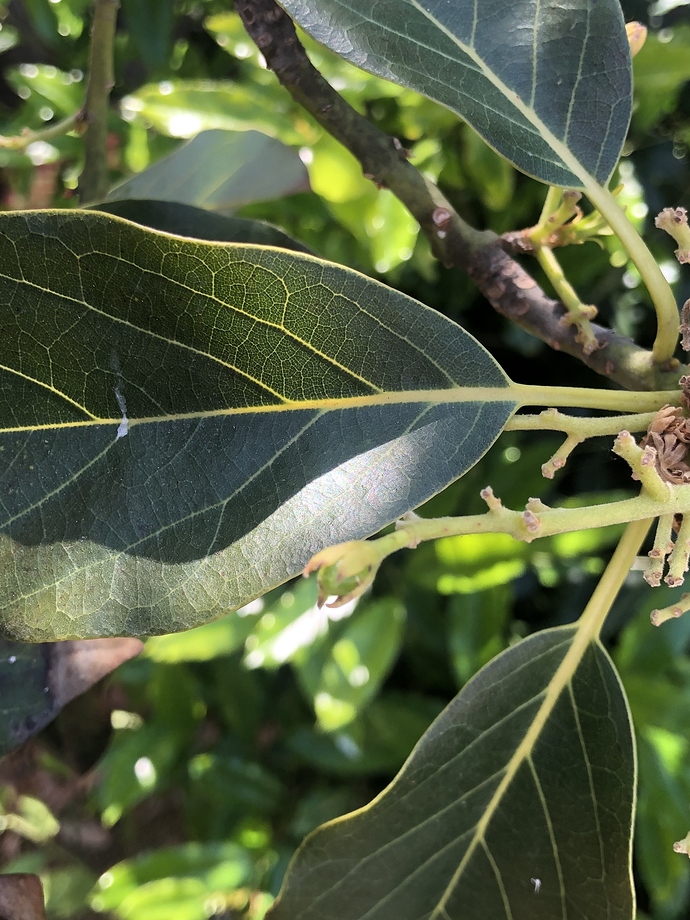 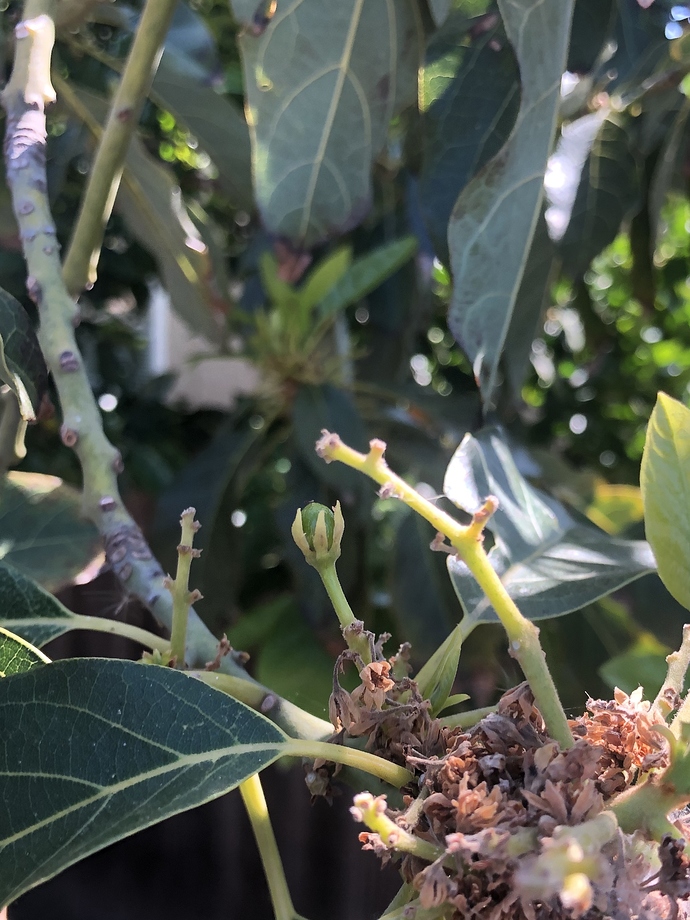 I am glad to hear it looks like you got better fruits of this season. And thank you for the update.

We usually get poor fruit set on plums and I think it is partially due to the fact they seem to bloom around the same time as my citrus. I also tried the honey technique based on a recommendation from Laguna Hills Nursery and they were recommending it for avocados, not plums. I tried it on two of the 3 plum/ pluot trees I have. I got only a slight increase in fruit set, but enough I will probably try it again next year if we have sufficient chill for good bloom.

There is also the possibility you have a seedling tree.

a good possibility, especially in california. Mexicola is quite cold-hardy(survived a freeze-drying 17F here in vegas), but of course, a positive identification will be a challenge now, and besides, the tree is established and can always be re-purposed. What really matters is if OP likes the quality of the fruits, and if not, then just graft over with several cultivars.

any avocado tree that bears, even if just a few fruits per season, is gold to me! Would even settle for an avocado cultivar that bears fibrous fruits, as long as the tree bears reliably. Some of the better-flavored avocados i’ve tried(randomly grown from seed) were actually fibrous.

oh yea, forgot to mention - I tried looking for a graft sign on the trunk and didn’t find any. It could also be that its been a while and it won’t be visible anymore. You are right, I’ll take any avocado too. I just want to get it to some reliable fruiting cycle

I was hoping, if I identified the variety, I might be able to get more specific info on fertilizing, watering, etc to improve productivity. I guess the best course of action is to let the tree do its thing this season and graft other varieties if there is no change.

Very nice tree. I’m over in Livermore and would love to have a tree so large and healthy looking.

If it was grown from seed could take 10+years to fruit.

let the tree do its thing this season and graft other varieties if there is no change.

i agree and do keep everyone posted.

I don’t live on the coast but the night time temperatures aren’t too different here.

Your tree sounds like a Mexicola based on the anise smell of the leaves and the free stone of many of the avocados. I’ve planted mine15 years ago and it took 8 or 9 years for the first fruit, which almost look like small eggplant, with smooth purple shiny skin. The flavor is exceptional, though the pits are relative large. We’re near the ocean so during the blooming period, I have a lot of anxiety when the 25 mph and over gusts start. When the blossoms get knocked off entirly, the tree keeps trying, so it has produced fruit throughout the year. Good luck!!

Thanks Greg. Mexicola wouldn’t be a bad guess, the only negative being that the fruit doesn’t have a shiny skin. All the fruitlets (except for one) on my tree dropped off which leads me to believe this year is not any different except that I kept a close eye on the flower-to-fruit process. I am convinced by the epicenter nursery blog above and my own experience that B type would be difficult to fruit in my zone (9B). I am planning to graft a few A type scions (Reed and Greengold based on availability) to the tree to see if the behavior changes

Check out this site. He lives in southern California, but posts a lot about Avocado trees and has a ton of knowledge that may be of help to you.

The tree produced less than 3 fruits last year and birds only left one for me. 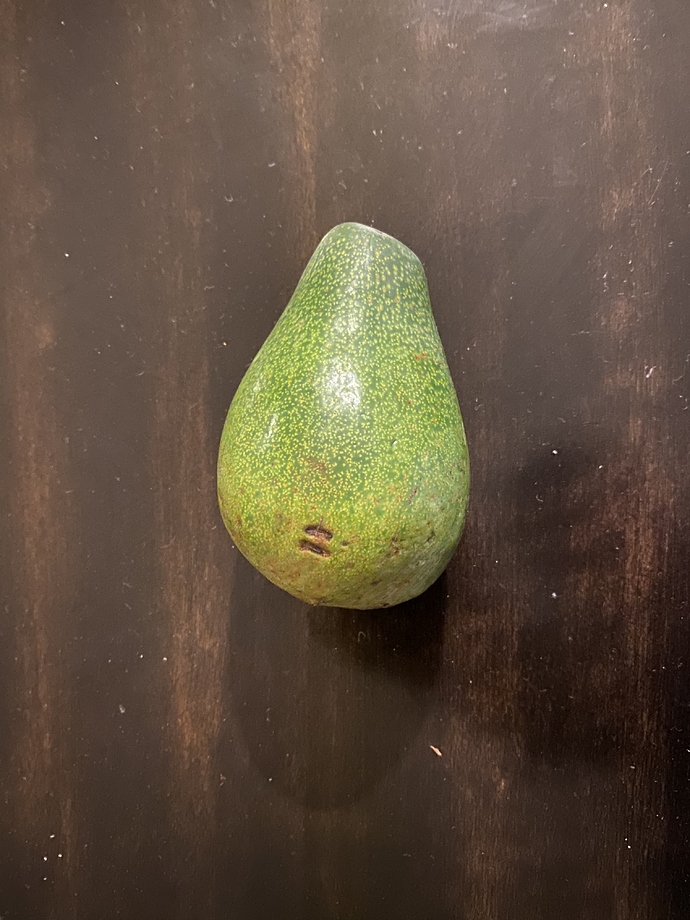 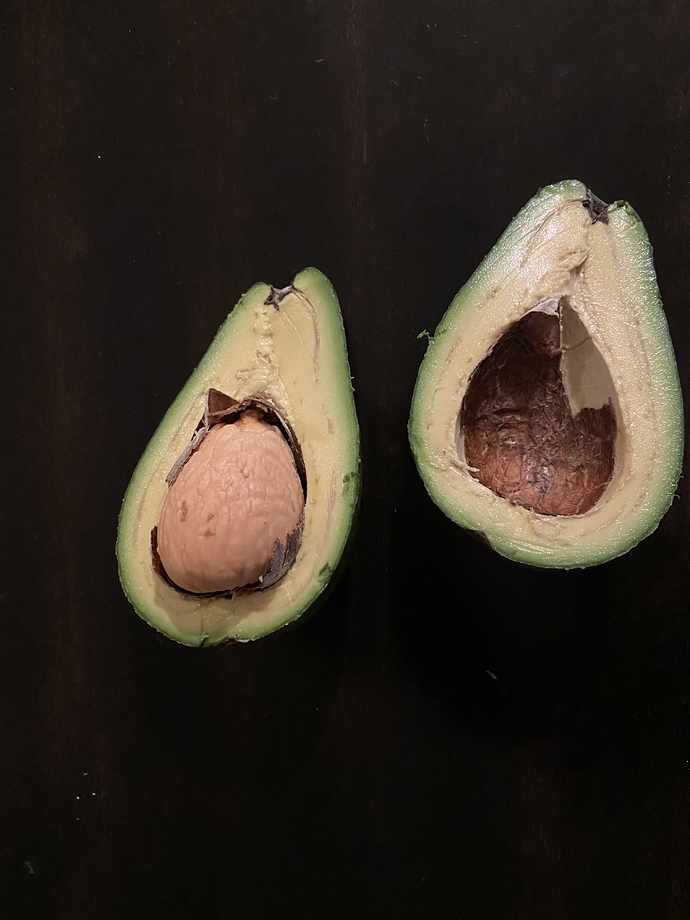 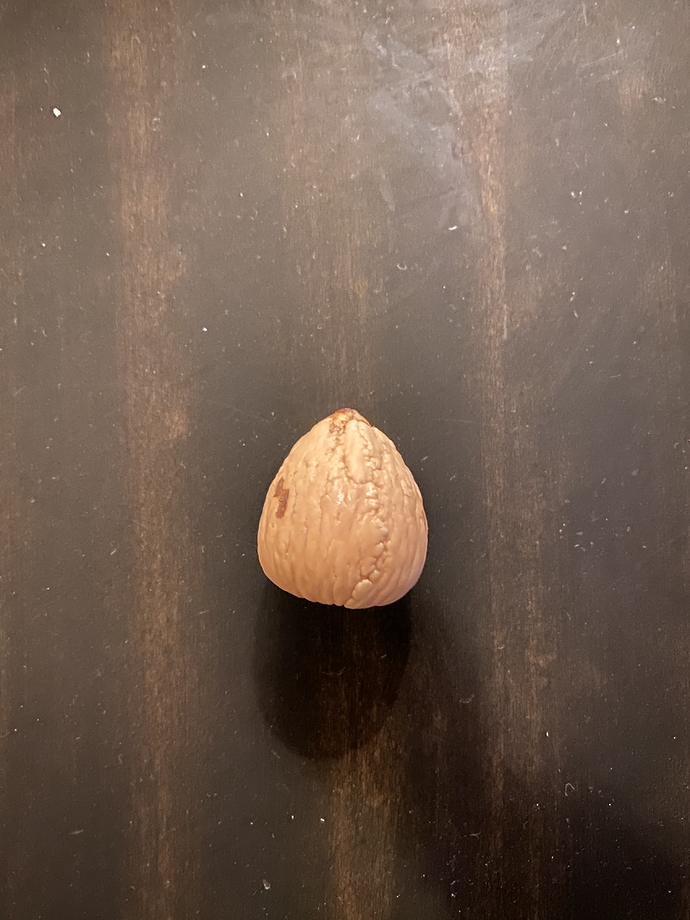 The taste is pretty good, soft skinned and less fibrous. However, the poor productivity doesn’t justify the premium spot

Today, I chopped down the limbs and reduced the height to less than half of what it was before. 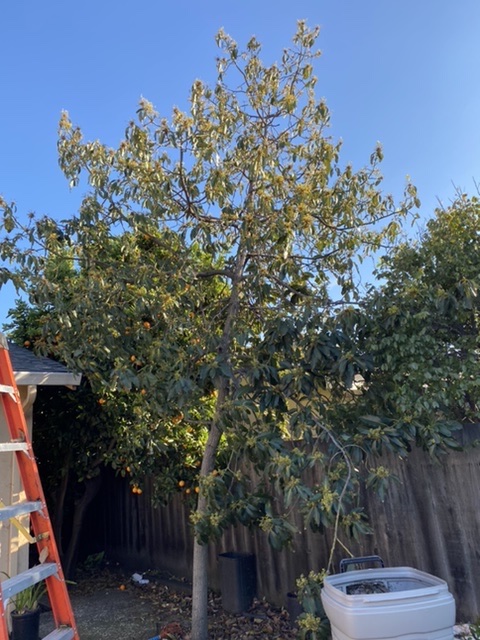 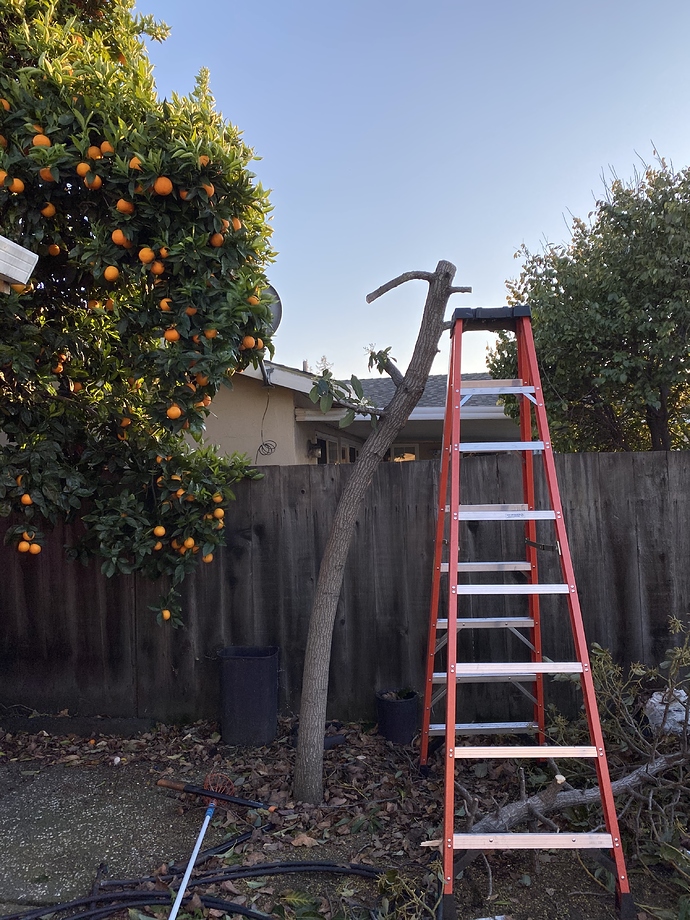 I am hoping that the tree will send out lower shoots that I can graft with varieties known to produce in our area, like Bacon, Greengold and hopefully Reed

Ellen at epicenter nursery suggested this. Well, she recommended cutting down even further but I left it at a longer height. There is a chance it won’t produce any shoots and die, I have to replace it then. Good point on the whitewash now that the trunk is more exposed.

If it were me I would cut way lower and bark graft the stump. If bigger than 3-4 inch stump I’ bark graft several scions around the stump so half of it won’t die.

I painted the trunk white which also covered up the buds. Thought it might affect them popping out, but doesn’t seem to be the case. 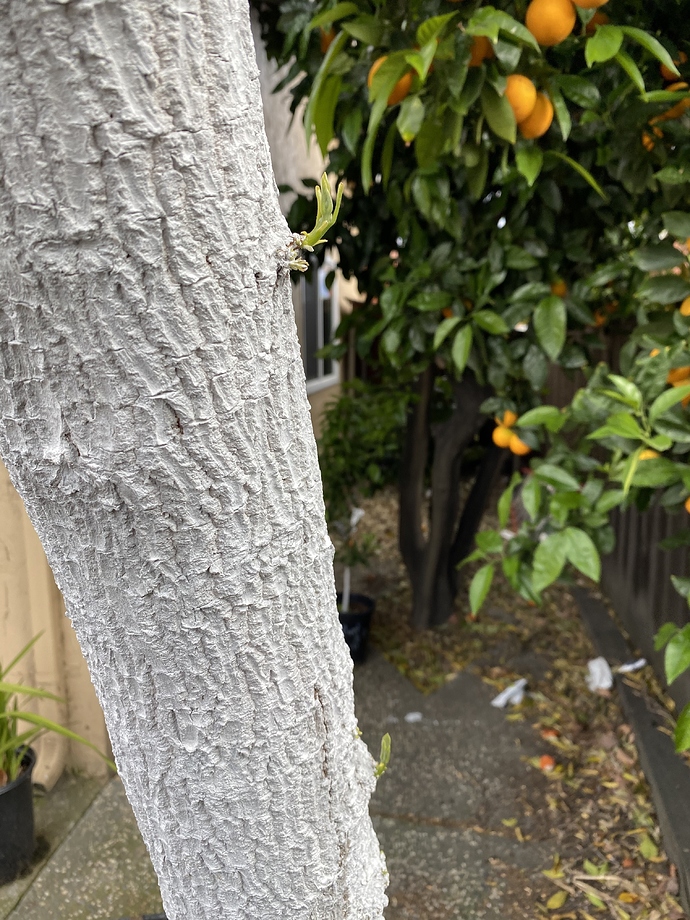 Now that I see some lower buds, its likely I didn’t kill the tree. I’ll probably bring down the height even more and try forming a balanced canopy with these shoots. Hopefully they’ll be ready for grafting next year.

This thread is due for an update. After I chopped the tree, it produced quite a few shoots throughout the trunk. I grafted the following varieties

From a local friend:

I don’t expect to be growing all the varieties. Keeping them balanced would be a nightmare. I heard the success rate is low, so I was hedging my bets. I could have waited for another year and cut the trunk even lower to get more branches lower down but went ahead with what I had.

After 3-4 weeks now, I see some initial successes with Second Red, Royal Wright, Bacon and Reed 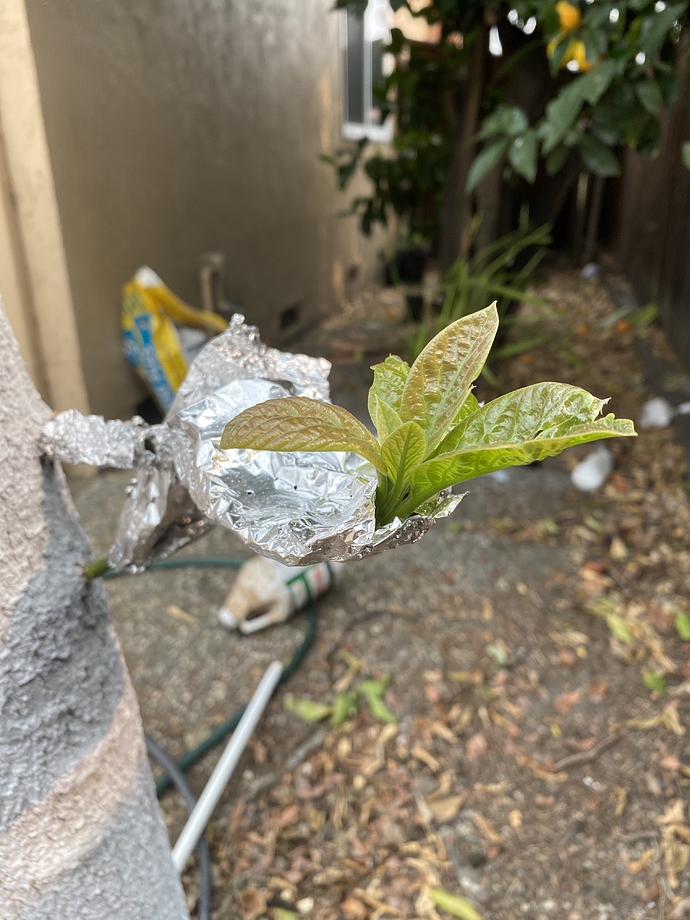 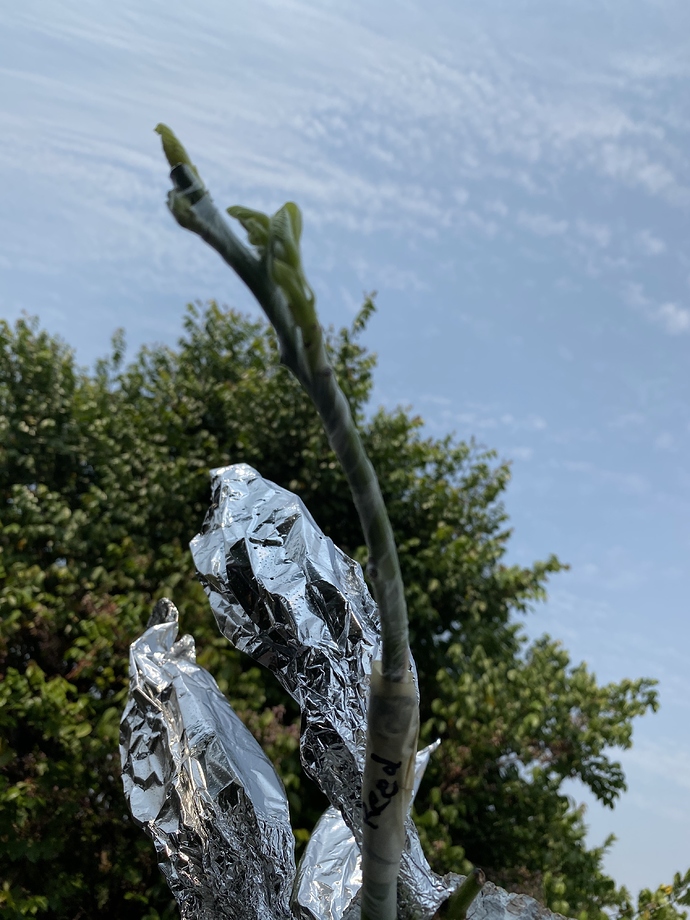 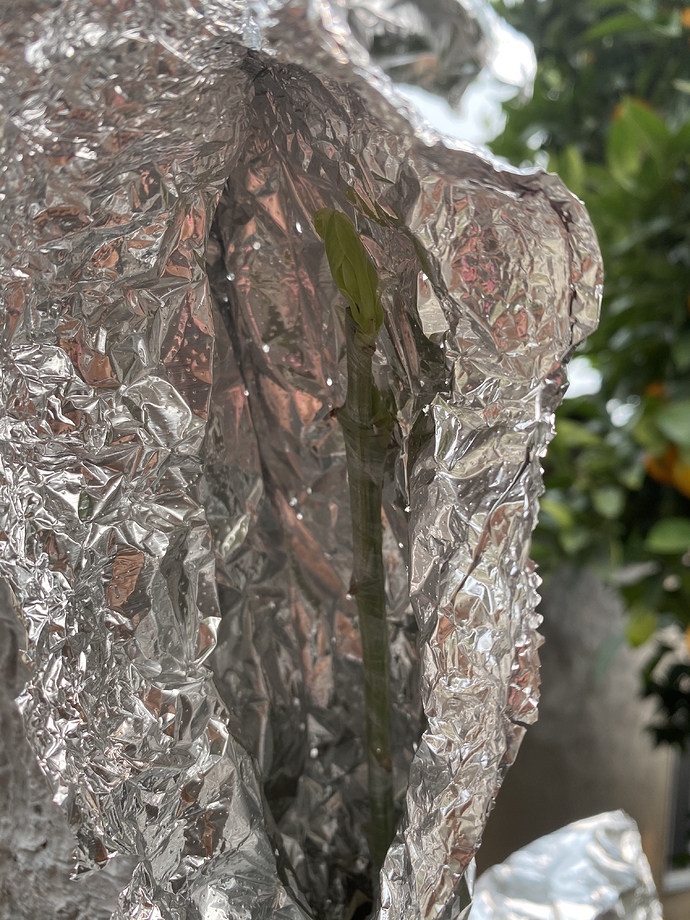 I will leave the scions partially covered until we get through the hot August summer.

Both Marta and Ellen couldn’t be more helpful, sharing knowledge, tips for grafting and shipping more scions than what I asked for. @Marta ran out of Second Red scions but searched again for some new growth on her tree to send me a few cuttings. I visited Ellen’s epicenter nursery and it was an avocado heaven!!

They really figured out how to grow these finicky trees very well and all her trees were bursting with new growth and fruits. In the back drop of Santa Cruz fog rolling over the hills and beach on the other side, that was one beautiful orchard! I highly recommend both of them for scions and plants!

Have been misting the young graft shoots to withstand this >90F heat wave here. 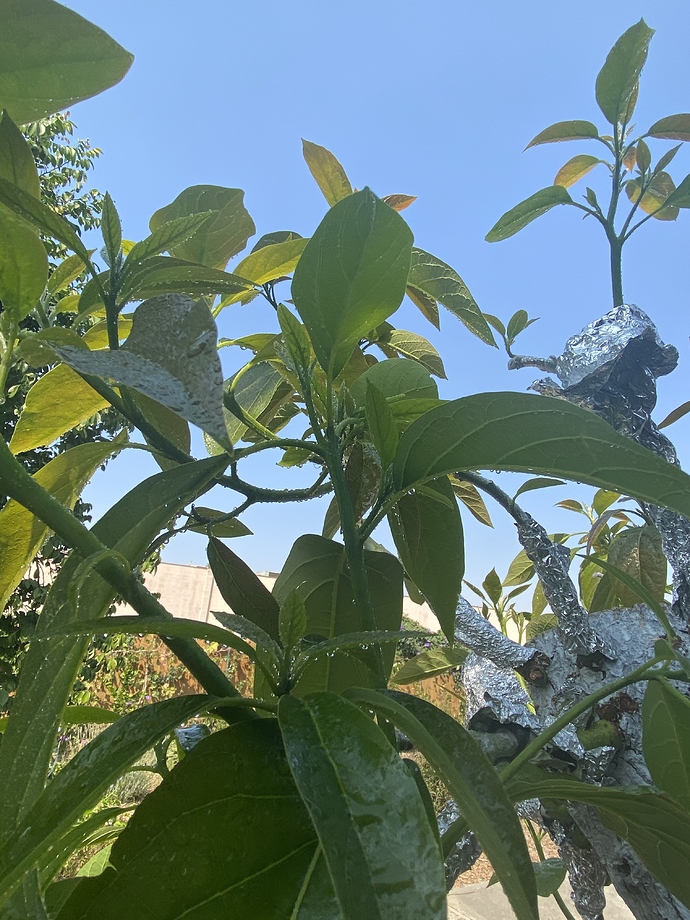 It ended today and I started opening up the grafts. Many of them have healed nicely but some did girdle the scion/rootstock. 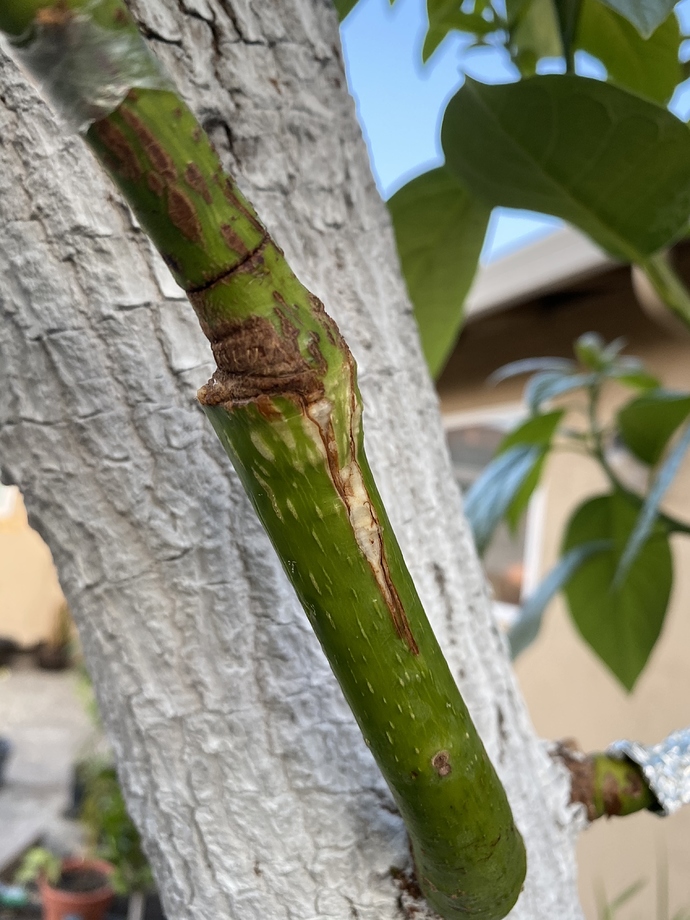 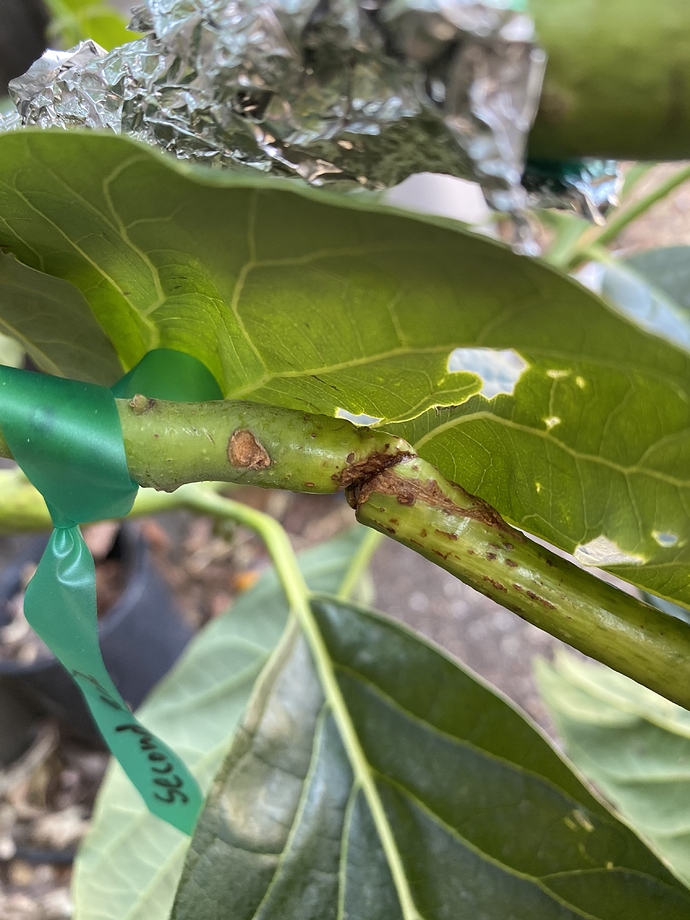