Hi all. I am in search of some advice. I just received the following email from Bernis @ HoneyberryUSA. I ordered a pair of meader bush cherries last fall and they were back ordered:

"My apologies at this late notice - I was told not that long ago that the cherries would be shipping to us but I went to the top and today found out our supplier had a no-grow year and is removing them from their catalogue. I have not found another wholesale supplier (a lot of retail nurseries get from the same propagator!)

So… I can offer a new D’Artagnon, Valentine, or Cupid cherry for a substitute as we’re getting down early November from Canada for the first time (presently not posted until we get them in hand, but I have received confirmation on our order)

The U of S cherries are much taller but much better tasting than the Meader series which is lovely for its small size of about 3’ tall and late ripening but not nearly the edible quality of the U of S cherries.

Please advise as to your wishes."

This post is by no means trying to complain or slander the nursery, in fact the exact opposite, I think this is superior customer service and I am very pleased to be offered the option of these newer U Sask. releases.

So my question to the group, which would you select? D’Artagnon, Valentine, or Cupid? Any input is much appreciated

its really out of their control. at least shes offering a replacement or refund. ive bought 4 types of cherries from them. 3 romance series and a lutowka rose polish cherry. all have grown well. had one bad order during covid but they made it right by doubling my replacement order. i have romeo , juliet and carmine jewel. juliet is the best tasting. id jump on one of those offerings as not easily available yet in the U.S. you can prune them down to a more manageable size if you want and they will likely still out produce the 2 small meader cherries. not sure which one to pick? maybe someone else will chime in with more excpeience.

Which of the 3 would you choose? Know anything about those particular varieties?

try googling it. ive read some on them but nothing comparing them.

well D’Artagnon is a dwarf like you wanted. cupid has bigger cherries but on a 10’ + bush and valentine is in between. up to you.

Can you get carmine jewell or juliet? Here is a great write up Tarts with a touch of romance | Good Fruit Grower .Here is some information on D’Artagnan, cupid and Valentine. Canadian Food Inspection Agency - Cupid
dartagnan-cherry.pdf (338.6 KB)
valentine-cherry.pdf (653.5 KB) 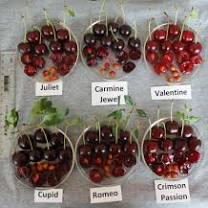 I’ve noticed substantially higher cherry numbers this year as Carmine Jewell ages. Anyone else seeing this trend? I would say the yields have doubled every year since they started bearing. I normally don’t see those types of fruit increases from one year to the next. Here’s a few pictures so you know what I mean. [image][image][image][image]

Planted 4 varieties of this series in the Spring of 2011 as 2-foot tall potted plants. 2014 was the first year they all fruited. Last spring Juliet was the first variety to bloom (May 27), and the same is true this year, although this year it’s 12 days earlier than in 2014 thanks to a milder winter and a warmer spring. Juliet in bloom, May 15, 2015, bush now about 5 or 5.5 feet high. Oh, “frost warning in effect” tonight – I hope it’s a light frost as I’d hate to lose all these blossoms. [i…

That’s the new one!! Get that one!

@TheDerek looks like one of the musketeers is finally coming to the US.

Thank you all for the input. I was already leaning D’Artagnon, so I think I will indeed go that route. I already have Romeo, Juliet and carmine jewel, this should be an exciting addition.

I’ve also got a couple backordered Meader cherries from Honeyberry USA, and I got a very similar email from Bernis. I’ll probably end up ordering all 3 of the newly available cherries, in a “complete the collection” sort of way.

But if you are still interested in the Meaders, I thought I’d mention that Indiana Berry list them. They are currently showing “Out of Stock”, but that’s normal for them this time of year. I’ll be checking them again in December, and you might want to do the same. I’ve had good luck with other things ordered from them in the past.