been thinking about putting an ornamental pepper plant in the front of my home. this seems like a decent candidate: the black pearl pepper.

the leaves are strikingly dark. the peppers go from shiny black to crimson. even the flowers have a unique color, as far as pepper plants go. 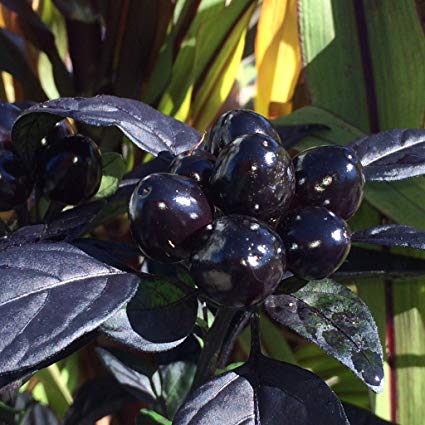 In our climate it likes morning sun year-round and mid-day shade – esp. on hot summer days.

dude, i’m impressed by the variety of plants you grow!

how do the black pearls taste?

the variety of plants

I grew them at my former home in Rancho Penesquitos. The plant lived for about 2 years but perished in one of those scathing Santa Ana events along with my Black Peruvian sage. The fruits are quite small – I did not try them.

don’t expect too much culinary value they are ornamental. they are hot but not very tasty. if you send me a PM I can help you out with all the varieties you’re looking for.

thanks, richard & pod, for the info.

and thanks, pod, for the offer! i already have paper lantern habanero seeds incubating inside a wet paper towel, courtesy of amazon & david’s garden seeds, and the aji pineapple will also be headed my way via amazon.

if you have black pearls, i’ll be up for a seed trade. what i have to offer:
• two strains of serrano (serranos are rather quotidian, i know; one produces pods featuring a dull matte color, the other dark shiny green pods, and both taste the same)
• datil
• vietnamese tear jerker (this is my favorite pepper in my small garden)

OK, some new 7-pot pics. More of the White’s are ripening, but the Bubblegum pods are really coloring up well. 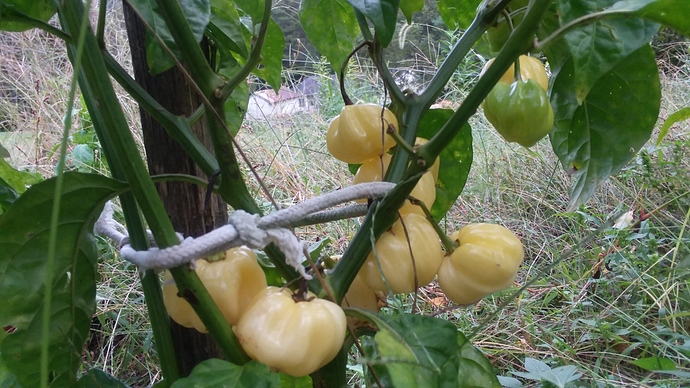 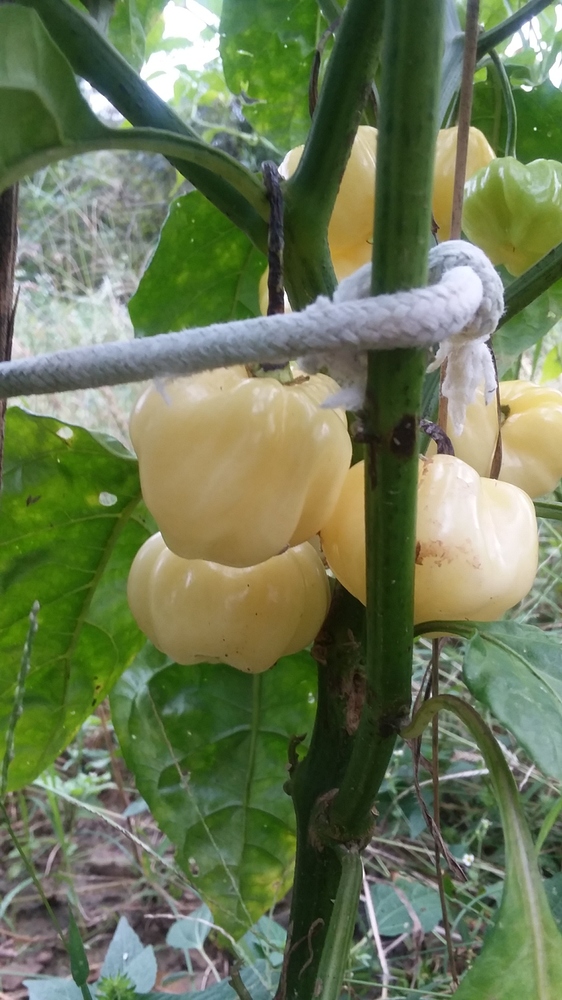 BB’s, a beautiful red color now, including the calyx, plus has that wrinkly look. 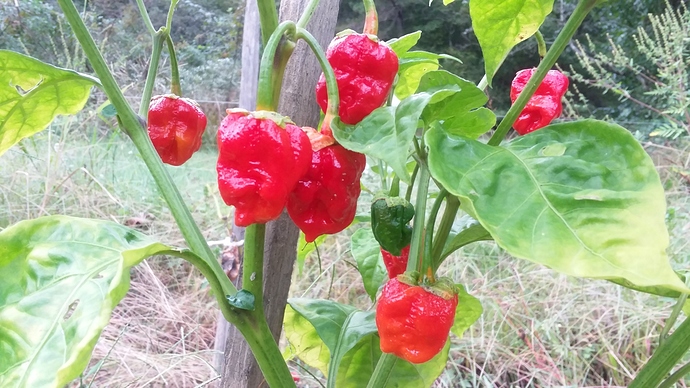 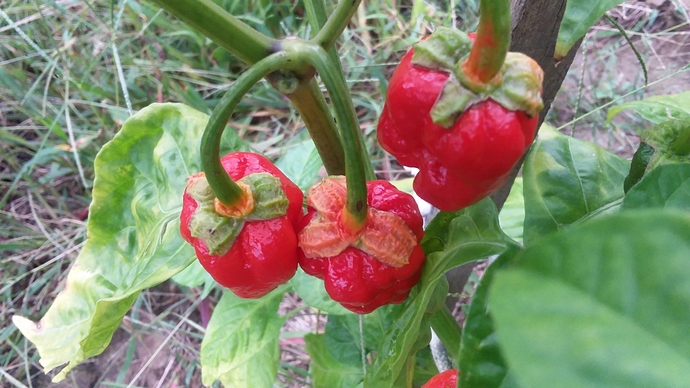 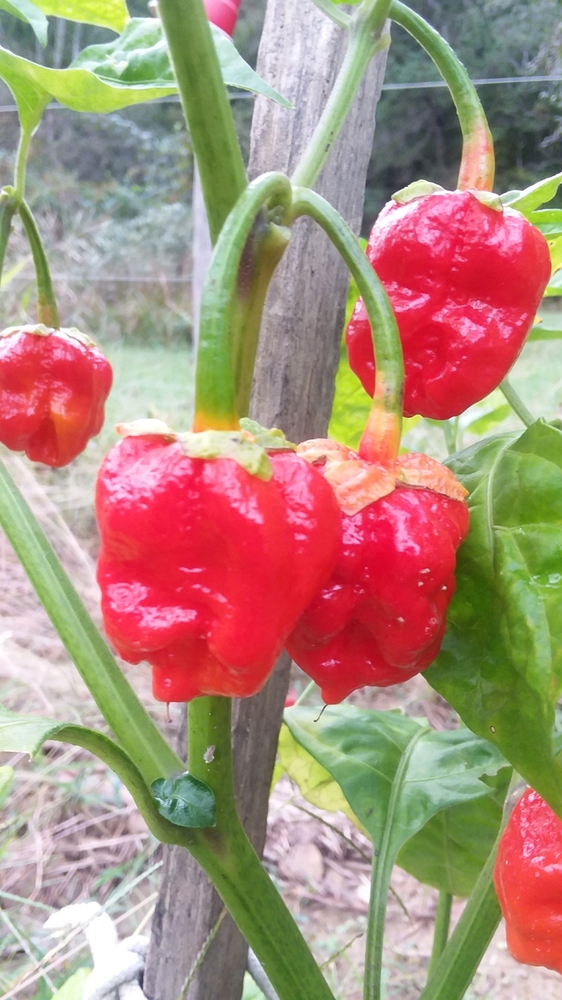 I picked one of the White’s, and had to try one. 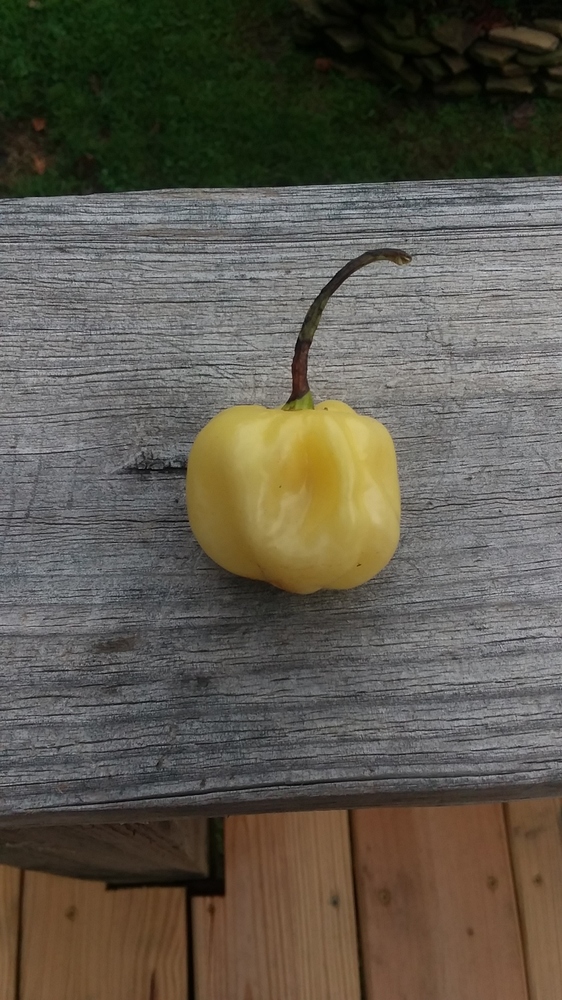 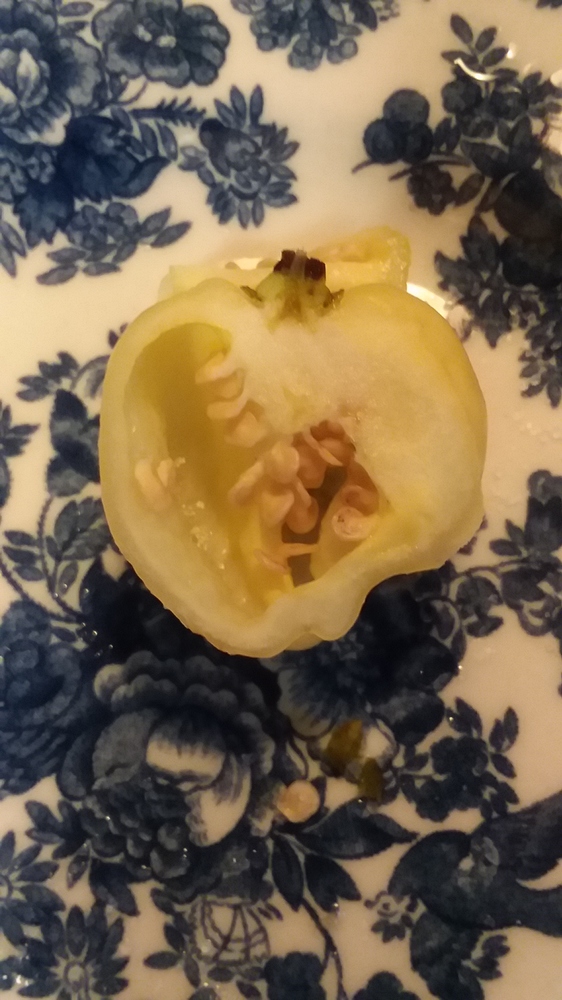 I already ate half of one, tasted better than the green one I tried a couple weeks ago. It has a celery, or slightly citrus like flavor, not unpleasant. The heat is Habanero like, a clean type of burn that is pretty intense, then fades pretty fast. But then, it comes back with a vengeance. Quite the mucus and sweat producer!

I’ll have try a Bubblegum soon, but going to wait a few more days, as I don’t have too many to sample.

no need to trade but appreciate the offer. I have around 1500 varieties of pepper seeds in my collection (give or take a couple hundred varieties) and am going to try and get rid of it. just losing interest in the hot peppers. I am mostly interested in growing the hard to find wild varieties.

I picked one of the White’s

You can see the the slightly damp interior, which may be the capsaicin?

I occasionally find moisture inside peppers of all types. It certainly contains capsaicin but it is also present in the flesh and especially the seeds.

forget the pepper. i’m impressed by your underlying tattoo.

@thepodpiper – Several readers here incl. @mrsg47 are interested in mild peppers. What flavorful peppers might you recommend that are spicier than Anahiem but less spicy than Hatch?

you’re too kind, pod. and 1500 varieties? consider my mind blown.

you picked the white a little 2 early. they will turn pure white, at least they do here.

GM Everyone, This year am growing Trinidad Scorpion, only a total of three plants. Just picked all red ripe ones last week and made up hot sauce using salt, lemon juice and chiles in an old blender. Cooked up outdoors and had enough for fourteen pints of hot sauce. Actually more like a concentrate since they are incredibly hot!!! Weeks later before first threat of frost will probably make another batch…could have enough hot to last for QUITE

Maybe I should have said oily, not damp.
As far as the seeds are concerned, I cut those out, didn’t need the added heat, not that it really mattered. Pretty intense as it was.

I ate most of the rest of it, but couldn’t finish it, I was getting water logged from trying to keep the heat under control. Had a bit of stomach discomfort, but that didn’t last, as I then had supper. My runny nose got a bit hot, I don’t know if the capsaicin was coming out of my mucus (I know, gross), or maybe I had wiped some of the residue onto it.

@thepodpiper, thanks for the info, I vaguely remember pics of ripe ones being off white, not yellow. I just had to try one of them. I imagine they will get hotter the more they stay on the plant?

Yes, the BG look awesome, but also look a bit formidable. Thanks again for the seeds for these two, and others. I have some Aconcagua peppers that were grown from the seeds you gave, they are a nice mild banana type. And the Beaver Dam are a pretty warm pepper, but tasty as well, maybe my favorite banana. I’ve noticed they start to produce real early, to the point of stunting the growth of the plant, next time I’ll have to pinch off those early buds to let it grow some more. My Balloon plants are huge, well over 3ft tall, and loaded. What color should they be when ripe?

@erect-and-thornless, hah, that’s a plate my wife got from a friend, quite a fancy design.

The balloons will ripen red

looking back, hornworm damage ended up being a natural topping exercise. the new growth seems to be bushing out, which hopefully means greater production. uh, thank you, hornworms, you hungry little bastards, you?

having been disappointed by the datil’s flavor, i’ve been giving away vigorous plants laden with ripe fruit to co-workers, who have been happy to receive them. those who’ve tasted the pepper report liking its flavor.

i’ve told them i’m giving them away because i’ve grown more datil plants than i need. didn’t disclose to them that the amount i need is zero.