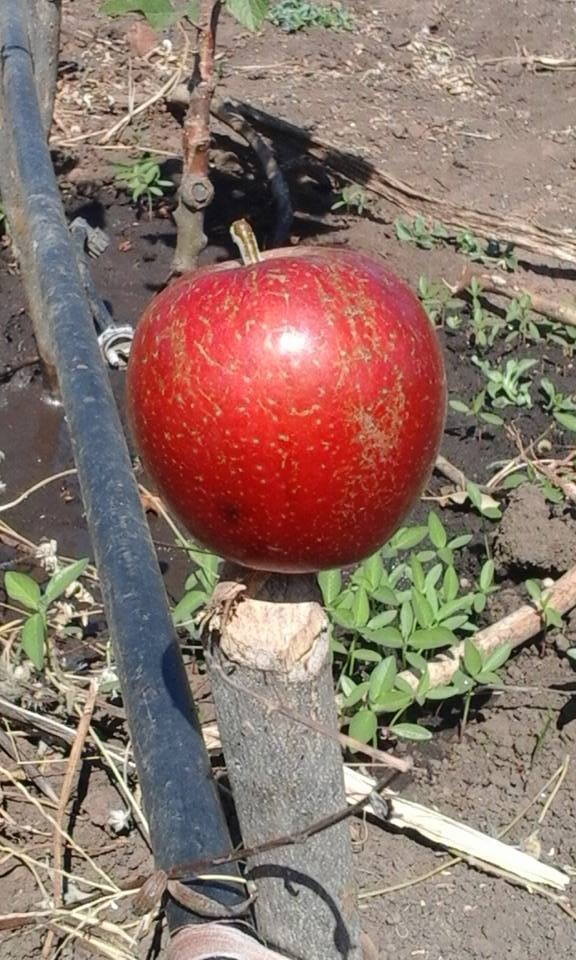 Beautiful apple, isn’t it? The variety is Hunge, an Old Southern apple which hails from the late 1700’s but was re-discovered about thirty years ago. Besides being beautiful, it is disease-resistant, and is high-quality, with an intense sweet-tart flavor with hints of wine.

But what’s remarkable about it is that it was just harvested in Chipata, Zambia, in East Africa. Chipata is about at the 3,700’ elevation level, but still gets zero chilling hours, rarely going below 50F. Grafted onto M111, the tree was planted about 5 years ago, but has been bearing about the last three years. The grower said the quality was excellent, just like I described it above. He also said there’s nothing like it in the market there, and expects to get good prices for them. They’re happy to get something to go along with the usual Anna and Dorset Golden they grow there (which turn out beautiful also).

Kevin, what a wonderful story. I just love what you’re doing for the folks in Africa. Talk about “teaching someone to fish”. Just a fabulous, fabulous story. And, what an interesting climate at 3,700 ft! The apple looks pretty big, too, or is it just perspective in the photo? I just love to hear these stories about heirloom apples. Maybe one I should add to my growing apple orchard!

Yes, it’s decent sized; here’s a photo on it with some zip drives as a reference. If it wasn’t for the russeting (very typical of the variety), it would fit right in with the Galas at the supermarket. The second photo is the area where the orchard is at, note the banana in the foreground, and mango trees in the distance. I keep telling the IFTA they need to hold their winter conference in East Africa where it is 80 degrees, instead of New Brunswick or Wisconsin like they usually do (and freeze their tails off during the field trips). 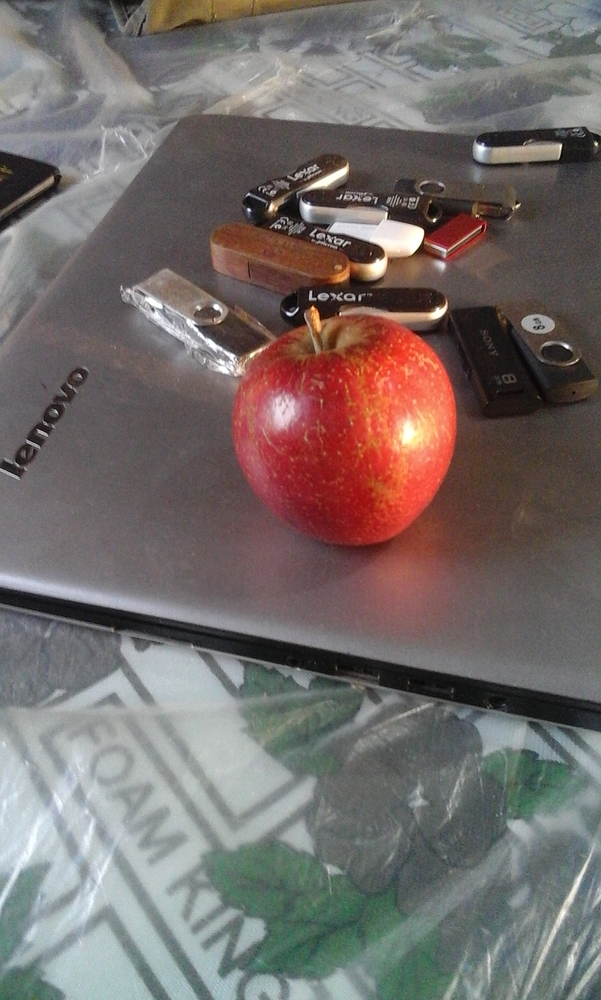 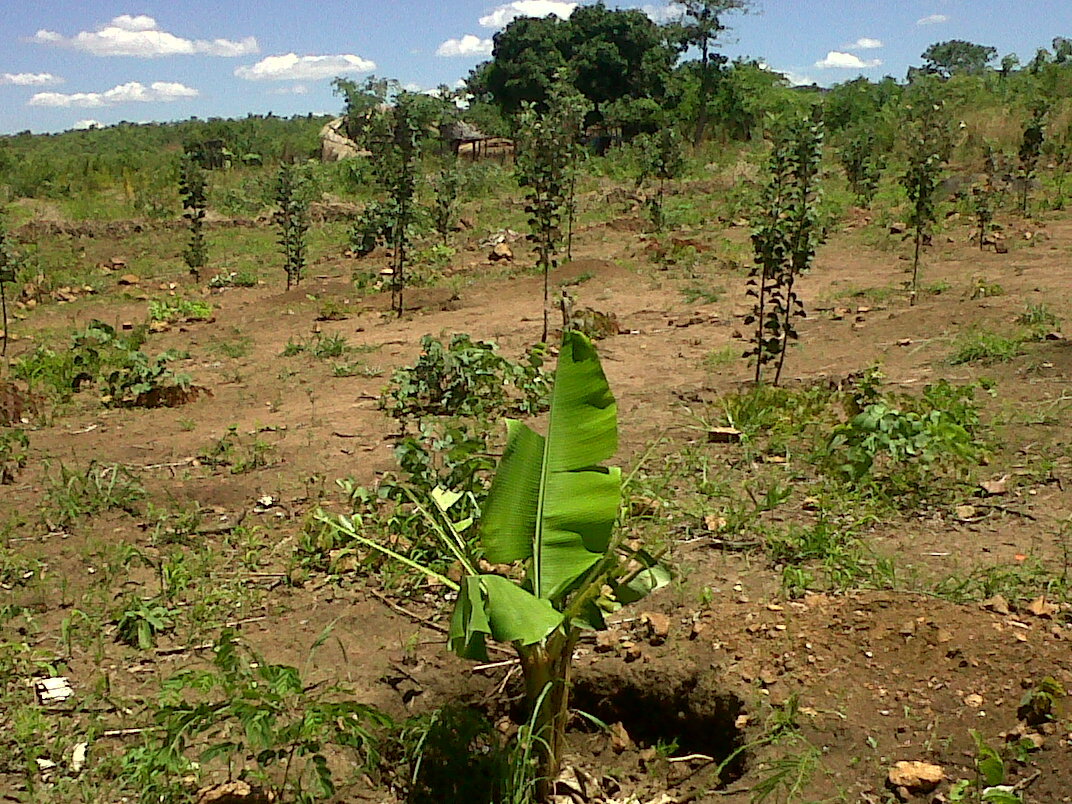 Ah, perfect eating size. And wow, that’s funny. Looks like my yard a bit with mangos and bananas. And apples, of course! Will keep this apple cultivar in mind for next January. If I can find it, Kevin, I may be ordering another benchgraft from you

I’d be happy to accommodate, but you can also buy Hunge from my friend David Vernon at www.centuryfarmorchards.com. He will sell one tree at a time, has all the old Southern varieties, and the stuff he sends out is top-notch, nice thick caliber and well-rooted.

Thanks, Kevin. Will check it out. I’d like a really nice summer apple. Not that Anna and Dorsett Golden aren’t nice apples, but I’d like to find one closer to the quality of my fall/winter Fujis. Willing to try Hunge. What cross pollinators will work? Anna, Golden Dorsett?

Anna and Dorset Golden blossom in January, Hunge is more along with Arkcharm and Akane. Don’t go by the time of year it ripens in Africa, their season is governed by rainfall, not temperature or day length. Blossoming and ripening times go out the window there.

I hope to get a few Hunge fruits for the first time this year and am curious how it will like Maryland.

Thanks for sharing this story and apple variety, Kevin.

It’s always nice to discover apple varieties that don’t need lot’s of chilling hours. I have some friends in the southern part of my country that sure would like some these trees as they lack the chill hours for the most common varieties.

Nevertheless, with my collection of more than 50 varieties i am finding that apples are very forgiving regarding chill hours with some very demanding varieties still producing in my climate (unlike pears for instance)

Okay, so probably blossoms the same time as my Fujis, or my Pink Lady. Very good. Now I know where to plant it. Thanks, Kevin, and how fascinating about Africa. Love your stories there, keep them coming.

That’s really cool. I’d love to give one of those a try in Florida. appreciate the tip, I’m going to check out century farm.

@scottfsmith My Hunge are still hanging- have you picked yours? Century Farm lists Hunge as ripe “pre-September” so am puzzled.

I just picked my last one. Wasn’t sure about ripeness but it was perfect although not uniformly “red”.

This is becoming my favorite apple!!!

@k8tpayaso what signs do you look for when picking it? How did yours taste? I tasted one drop a week ago that didn’t have much taste but a crunchy texture.

It released easily and I needed to use it…. Lol!!!

It tastes like taking a sip of hard apple cider. Has a “winey” flavor. Sweet and a bit of tart. Crisp. Flesh is yellowish.

This is becoming my favorite apple!!!

I just tried another Hunge, not close to ready, almost tasteless. Zone 7 A/B. Although my soil produces a lot of tasteless apples here.

I was mistaken…. I still have 5-6 Hunge left in the tree. They are just beginning to show some red. I actually picked one a few weeks back that seemed to be ripe so I don’t know if they have a varied ripening time or what.

I picked this one July 26. It did have some bird/insect damage on the back side so that might have caused it to ripen early 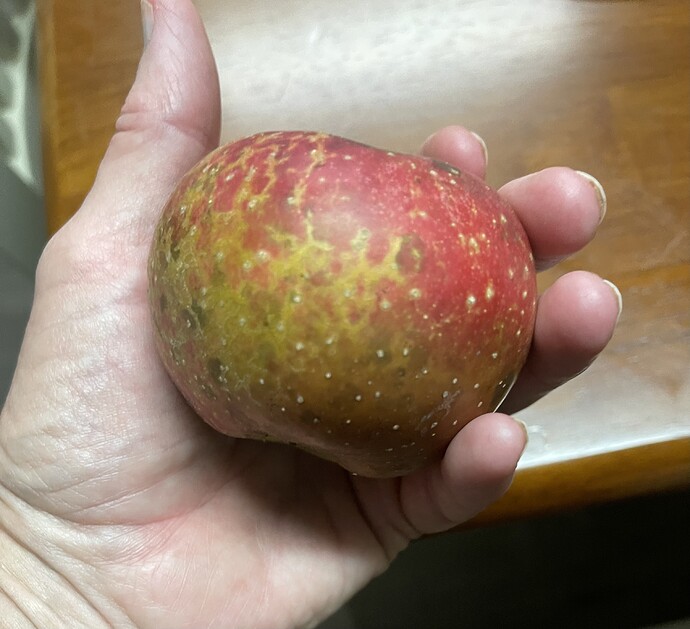