Would the pollen from trees switching to female after 2nd year be female? I bet so

the staminate flowers (that will “show up”) are pollen flowers
the pistillate will be female. Those pistillate will still have parthenocarpy as a way of producing fruit and as a means of self-fertilization. However, any staminate flowers that will then pollinate with actual pollen, will produce seeds in fruit that otherwise from parthenocarpy would have been seedless otherwise.

Basically what I thought after listening to that guy is that a parthenocarpic tree becomes monoecious (has both female and male flowers on the same tree).

It’s a rather interesting observation in my humble opinion. 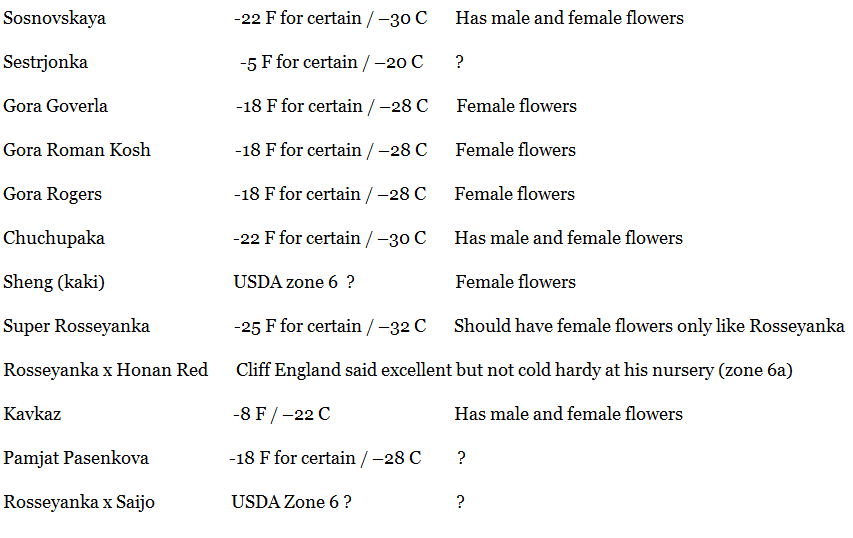 Those (3) Gora are not Fahrenheit hardy like my current chart states. Major damage/kill occurred at -12 F in Kentucky, USA.

I’m afraid I can’t really confirm any of these hardiness temperatures by experience. Hardiness isn’t really an issue where I live. Our lowest temps are around -10°C= 14F (with an occasional -16°C= 3.2F every 15 years or so) but average wintertemperatures are between 5°C=41F and -5°C=23F. The real issue is Spring frost!!!
I would very much doubt if any of the 3 Goras are as hardy as you have them in your chart because morfologically they lean very much towards D.kaki and not virginiana I would think that -22°C=-8F would be more realistic. The same goes for Sestronka.
Sosonvska and Chuchupaka could indeed be (almost) as hardy as in your chart because they are very close to D.virginiana morfologically. Super Rosseyanka is also very close to D.kaki and I think -25°C= -13F is realistic. Kaukaz is pure D.kaki and I would put it somewhere around -18°C= 0F like all very hardy D.kaki including Sheng but maybe brief episodes of -8°C= -22F could be tolerated.
Pamjat pasenkova would have the same hardiness as Nikitskaya bordovaya.
No experience yet with the other varieties (to small or not yet in my collection)
I haven’t seen male flowers on Sosnovska yet and Sestronka is also uniquely female here.
the rest is as you say…
Kaukaz is predominantly male flowering in my orchard and I removed it last year because of that.

Dax chart and your updated infos still put JT-02 the most cold hardiest of all Hybird persimmons at -27F. A Polar Vortex of -31F two years ago left only 2 out of 15 JT-02 survived at my orchard. My JBT-06 is a first year graft in a pot and I will test its hardiness in a year or two if the temp dipping below -20F.

With -27F hardiness your JT-02 sounds more like a pure D.virginiana, Tony.

Most hybrids exhibit some form of mid-point heterosis meaning that they are somewhere between the parents. However, traits like cold hardiness are often dependent on one or two genes which may be dominant. This means it is possible for an f1 to exhibit cold hardiness as high as the most cold-hardy parent. I can’t state that this is what happens with persimmon, but the articles I’ve read suggest cold hardiness is dominant. The emphasis should be that genetics often does something surprising.

And about JT-02 is it will return to above the union whereas others such as Rosseyanka here where -12 F is my winter temperature a few times max., …Rosseyanka dies here below the union. It may take 4-years, but, it will die.

@Mikatani thank you for your thoughts on hardiness. I see you have Sestronka and the reports I’ve seen say it is a low producer. Is that what you have seen in your orchard?

If (you) & (I) can remember where this is, (I’m gonna bookmark this post), here is our most current recent data: 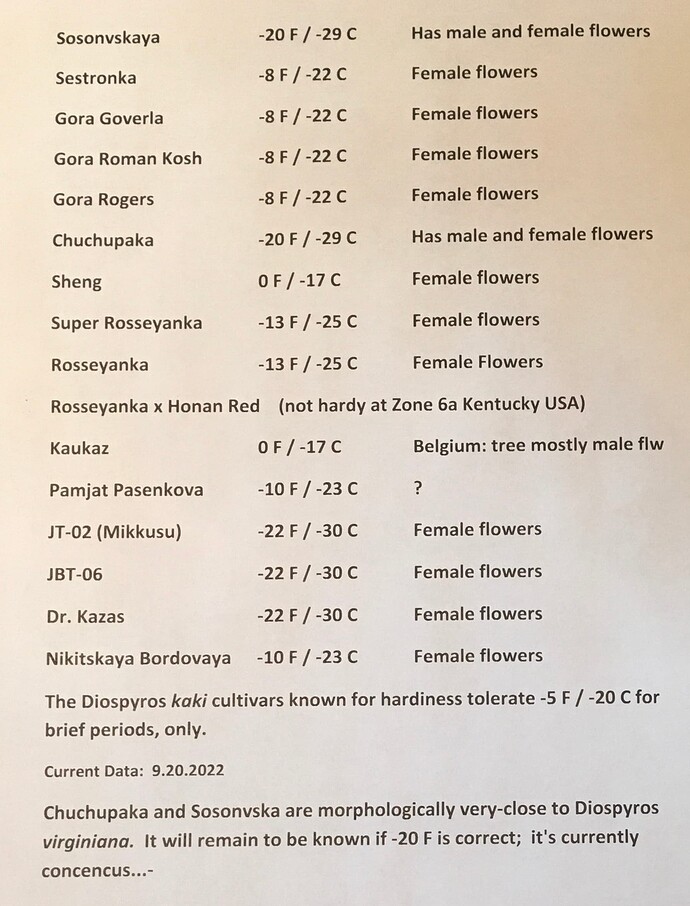 Thank you @Mikatani . I’ve had time to think about what you’ve said, and, it all makes sense to me, perfectly, again, thank you

I’m going on memory with this, but pure D. kaki is normally only cold tolerant down to about 8F. The hybrids cluster in a range from -8F to -22F. Sheng and Kaukaz are outliers in that they are neither as cold susceptible as pure kaki nor are they as cold tolerant as the hybrids with high virginiana percentage. This suggests that a dominant gene is responsible for cold hardiness.

This is potentially misleading.

For starters, there is no single “pure D. kaki.” Rather, there are lots of D.kaki varieties. No one number applies to all varieties.

Next, +8 F is not a clear boundary. Instead, there is a mean/median around +5 F with a standard deviation of perhaps 5 F. My IKKJ has tolerated -5 to 0 F routinely but -5 F might kill plain Jiro.

Complicating the discussion is the fact that the cold tolerance of these D. kaki varieties varies by season. All varieties appear to be more hardy in the depth of winter than in late winter / early spring.

Of course, D virginiana varieties are unequivocally more cold hardy than D. kaki. Moreover, hybrids tend to display intermediate hardiness. This suggests that cold hardiness is NOT determined by a single dominant gene but rather by multiple genes whose impact is somewhat additive.

The hybrids listed above are in several cases 3/4 kaki. This is the reason for a strong suspicion it is a single dominant gene. I think you are correct that there is a dosage effect meaning that in a hexaploid genome having more than 1 cold tolerance gene gives increased cold tolerance. However, the data presented - if accurate - still strongly supports a single dominant gene. The outliers - Sheng and Kaukaz - suggest the possibility of more than one gene associated with cold tolerance. They may also be caused by a single cold tolerance gene with 5 that are not. I’m not digging into this as it is relatively unimportant to me since I don’t grow persimmons. But for those who are growing and breeding persimmons, the possibility that a simple genetic test could find superior cold tolerance is compelling.

I think if you dig around in some of the Russian research, you might find they already located a gene associated with cold tolerance.

Sestronka is a good producer but not the earliest ripening…also not very sweet here. large fruit with a thin peel like virginiana

Next, +8 F is not a clear boundary. Instead, there is a mean/median around +5 F with a standard deviation of perhaps 5 F. My IKKJ has tolerated -5 to 0 F routinely but -5 F might kill plain Jiro.

I have not researched it yet but I wonder if hardiness amongst D. kaki is potentially related to the genes for astringency? Please correct me if I’m wrong (anyone reading), but seems to me that Miss Kim and other D. kaki that are known for cold hardiness (relatively speaking) are all astringent until soft, whereas Fuyu and non-astringent types seem to be the least cold hardy in general?

This may pose a greater challenge if my suspicion is correct for those like @Barkslip attempting to breed a more cold hardy non-astringent variety. Obviously there are many factors but working against a “dominant trait for poor cold hardiness” is potentially a significant challenge. Not saying it isn’t a worthy cause but it might take a whole lot of seedlings to find a few winners. That would make the resulting variety that much more impressive in my opinion.

I doubt that astringency is related to cold hardiness. The Asian PCNA genome is very restricted; probably there was a mutation in a PCA type. The Asian PCA genome is much richer. So probably there is greater dispersion among PCAs. The existence of a few cold-hardy PCAs should not obscure the fact that most are not.

We know that a few different genes can impact astringency. One gene (or group) can affect production of tannins, another storage, another neutralization (i.e., the PVNAs). Some traits are qualitative – all or none. For example, non-astringency in Japanese PCNAs is controlled by a single recessive gene that must be identical across 6 alleles. As I recall [please confirm my memory], this gene impacts production.

FWIW, the PCNA mutation appears to be present in some Asian PCAs. But as it is recessive, it does not impact the phenotype.

On the other hand, non-astringency in Chinese PCNAs is controlled by a single dominant gene that must be present on only 1 allele. As I recall, this gene affects storage.

Finally, non-astringency in Asian PVA/NA is quantitative - more or less – controlled additively by the genes on all 6 alleles. As I recall, this gene causes the seeds to produce ethanol.

Much of this is detailed in a recent Nature article. We don’t need to wait.

probably there was a mutation in a PCA type.

FWIW, the PCNA mutation appears to be present in some Asian PCAs. But as it is recessive, it does not impact the phenotype.

John, from what I may recall, you had information from studies that the first PCNA or PNA that I sort of remember as being what started it all as far as non-astringent/“crunchy” persimmons go - was a wild mutation. I thought it may have occurred on one continent and my memory says Japan;

if the Chinese or Koreans had wild mutations or a biopath that created a Non-Astringent rather than nature’s own mutation(s), that I don’t remember and would you confirm that?

You’ve done all the reading of documents whereas I’m ‘playing along’ on this board. I still wish very much to know answers of course.

Anyone, please, not just John.