Cliff has (2) Rosseyanka males planted where there are no other male flowers and they pollinate his selected other trees in that vicinity for his breeding: one is known (written on the bag from Clifford) as: “-22 Roseymale” and another that’s about -11 hardy he doesn’t have a name for it. Both are near one another and both are are pollinating with wind/bees… again, non other pollen except from these. Lavergne was also using Clifford’s “xRosseymales” 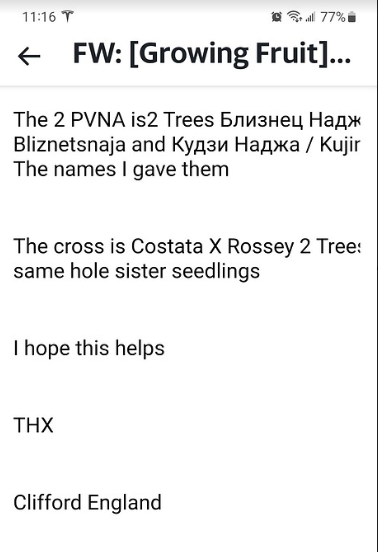 Cliff England (info about his two trees that was translated below)

“Howdy Dax
I was at Cliffs in 2019 and tasted some of the hybrids. I made notes onnthe ones i loved and got the wood . That would have been Costata x Rossey at the time.
At the time .
He has since named the two trees (i think??)
So i got both wood from him again last year…
So this comes from Cliff and if its Costata xRossey , its from David Lavergne.
Cliff has an awful lot going on there…
( … )
B”

Cliff has too much going on. He told me last I talked with him on the phone that he has about 2-hours in the morning and 2-hours in the evening and he’s busting it 7-days a week.

Hmm, if it proves to be hardy and a reliable ripener for Buzz, that opens a whole wide world for northern growers. He’s smack in the middle of Vermont either 4b/5a, and that area probably gets fewer than 2000 GDD.

Good luck everybody grafting or getting one.

getting closer to my z4. does anyone know of any z4 hardy persimmons?

Meader, probably H-118 Steve & Garretson I’ve heard over and over is super-hardy.

Costata is a PCA kaki variety.

There is no apparent genetic basis here to expect PVNA fruit. If there is PVNA fruit, it is a miracle. I wish you guys luck pursuing it but I think it’s a waste of time.

As @Arhus76 mentioned, if Russia has a PCNA fruit from non-PCNA parents, it’s not a “miracle”, it is a genetic mutation or an unexpected variation in the code. I’d postulate that at one point in the existence of kaki persimmons there were zero PCNA trees. At some point the code switched and here we are arguing about “miracles”… I’m not saying I’m right, just that miracle is not the term I’d use. Mutation would be more accurate in my opinion although there may be a better word in the genetics community.

better word in the genetics community.

My own words are: “genetic miracle”. This is just one of so many. We have no idea how many other “cool cultivars” are in existence.

Scientific consensus is that the PCNA trait reflects a mutation, as you suspect. The mutation must be many hundreds of years old, since PCNA varieties were discovered in the wild roughly 600 years ago. There’s no reason why this mutation would not have spread among wild persimmons, especially since it is recessive – the mutation would not affect the fruit unless all 6 chromosomes had the NA allele.

Correspondingly, MANY PCA varieties have 1-5 NA genes. This is documented in a paper that I posted recently and can repost here if necessary. So it would not be unexpected for a PCA x PCA cross to produce PCNA offspring – we’d just need 3 NA genes from one PCA and 3 NA genes from another.

PV is another story. We don’t know nearly as much about it. The neat thing about the PV trait is that it is not completely recessive or dominant. A few PV genes produce a little PV in the fruit – PVA.

What would be a miracle is if a PVNA fruit came from a tree descended from parents with no evidence of the PV trait, not even PVA.

It’s ok to have questions that can’t be answered - R. Feynman.

Sure, it’s OK morally or aesthetically or whatever. But it can be a problem practically.

Imagine I’m wandering in the wilderness trying to find my way home. Is it OK not to know which direction is best? Sure, it’s OK morally. But it’s not OK if I waste time and maybe die lost.

That’s the situation we’re in, metaphorically. We’re trying to find our way to better persimmon varieties. A random walk is not the more practical approach.

To clarify, browning flesh is not evidence of PV (pollination variance). Browning can occur for other reasons.

Causes of flesh browning in persimmon ‒ a review

Abstract:
Flesh browning is one of the main physiological disorders that cause important quality losses during the postharvest life of persimmons. Different types of flesh browning have been described, since the manifestation of this disorder can be associated with different causes. In some cases, the appearance of the browning disorder can give us clues to the cause; however in other cases different factors may lead to visually similar browning disorders. Mechanical damage is one of the reported factors involved in flesh browning and persimmons are generally very sensitive to mechanical damages, which may exhibit brown or pinkish areas around the flesh. The mechanism of this alteration has been studied in depth, and the oxidation of tannins has been reported as a key process. Other factors frequently associated with internal browning is storage under controlled or modified atmospheres; in this case the flesh browning occurs mainly in the flesh of the fruit. The optimum atmosphere conditions to prolong storage will depend on the cultivar; thus the same atmosphere can be effective for one cultivar and lead to disorders in other one. Also, exposure to anaerobic conditions, such as those of the CO2-deastringency treatment, may result also in flesh browning when the CO2-exposure is prolonged. Finally, other factor associated with internal browning is high or low temperature exposure. On one hand, the application of heat treatments such as hot water or hot air can cause damage and discoloration in the fruit. On the other, although the main manifestation of chilling injury in persimmon is associated with textural changes, in some cases it has been also related to internal browning.

Joe Cliff stated it is a true Hybrid PVNA that you can eat it hard if pollinated and had seeds with brown flesh. This is fit a true definition of a PVNA but you refuse to except and in denial. I will bark grafts 3 trees this spring and will enjoy it and I will let you know that I told you so.

What would be a miracle is if a PVNA fruit came from a tree descended from parents with no evidence of the PV trait, not even PVA.

If you consider it a miracle in the sense of a seed making a tree (new life), then I’d agree with you. But, environmental or other conditions we may not understand have certainly caused this in the past, and I’d bet it will happen again.

Unlikely to make a jump from the “base form” to PCNA, yes. But nature does some weird stuff. If a clown fish can change its sex, or a turtle egg is affected by temperature to determine which sex it will be born, or a persimmon tree can be male or female or both or switch as it matures (which is all accurate and documented), then I am confident the genetic code is not so stable that something weird is possible.

In 600 more years maybe science will have these pathways figured out.

Tony – I really do hope that you succeed.

FWIW, this is the first time anyone stipulated that the hybrids were pollinated and had seeds. I’m glad that’s clarified.

If you verify that a PVNA hybrid was produced from PCA Kaki and PCA Virginiana ancestry, it will be very surprising. It will suggest either a novel mechanism of pollination variance or a novel gene with apparent dominance. I think.

One other consideration: What variety pollinated Cliff’s trees? I have wondered whether the pollen can impact the seeds. So hypothetically, Coffee Cake might induce PV in a nominally non-PV variety. This is pure speculation, of course.

Yes, that’s what I think too;
While specifying that there are no scientific studies on the behavior of the PCNA gene associated with virginana. We therefore cannot affirm that all the loci must be PCNA in order to be expressed.
It should be understood that for a long time Zengimaru was the only Asian pollinator for hybrids. The PVNA gene is present and just waiting to be expressed. Depending on the varieties, knowing where they come from, we can guess if zengimaru has a possibility of having been used.

I have grafted this one