I dont think my neighbor likes me

Behind our homes is the local park. The neighbor cleared about 25 feet behind his house into the park land. His fence is up clearly deleniating the property line from the park. 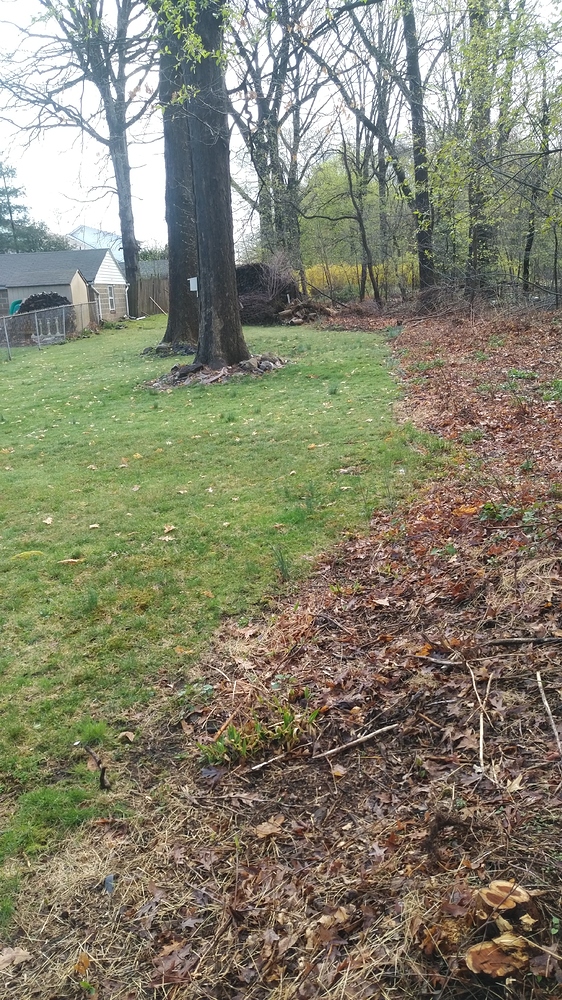 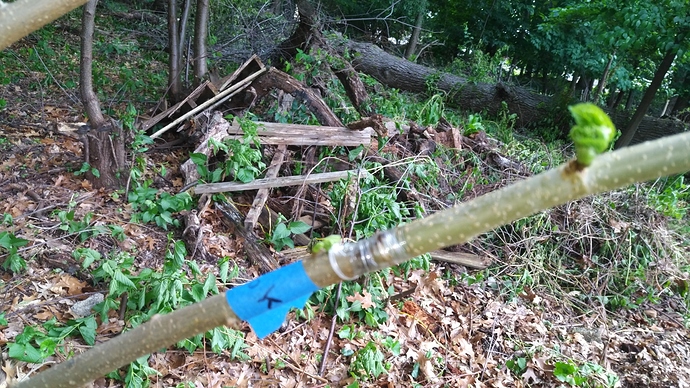 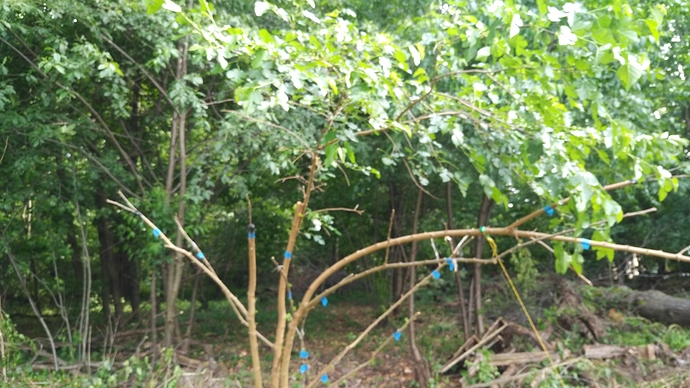 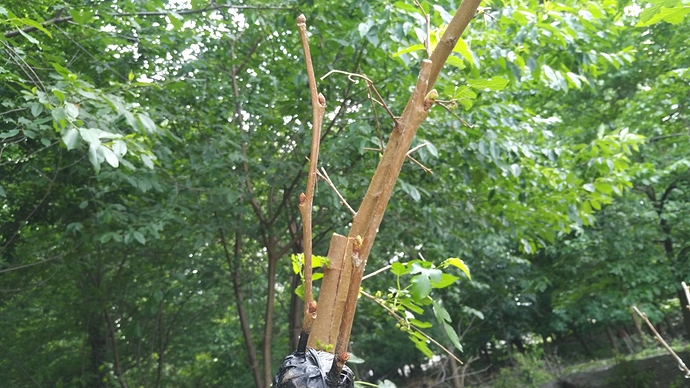 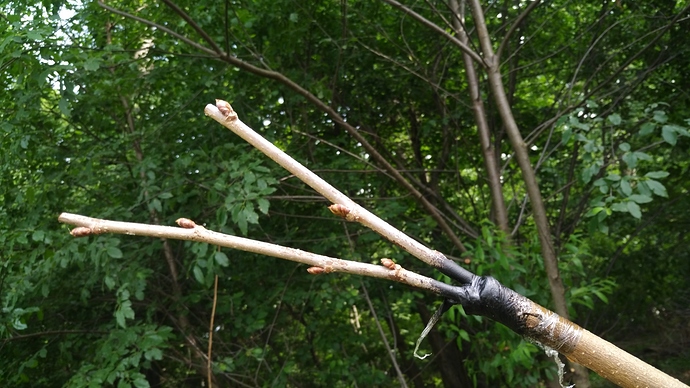 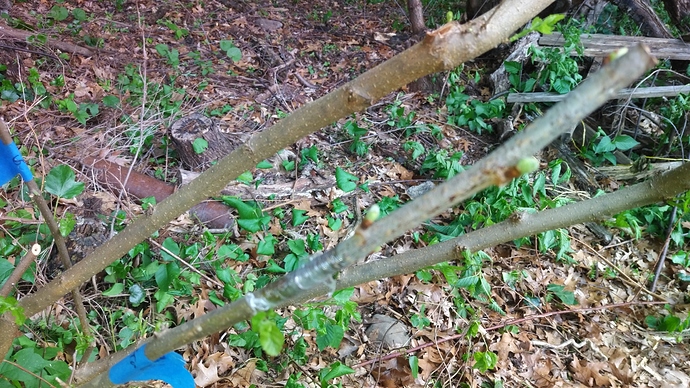 But alas my efforts where not appreciated. 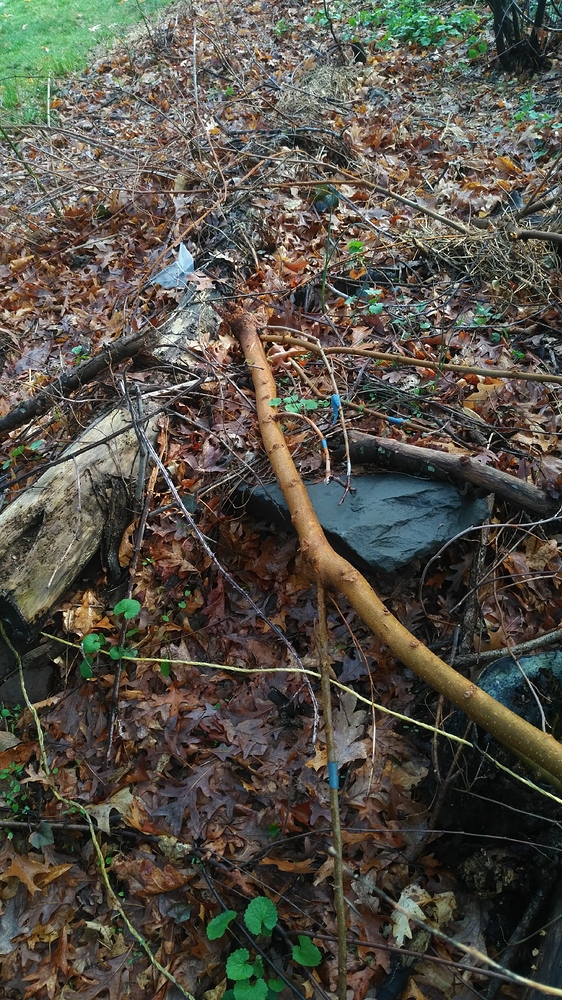 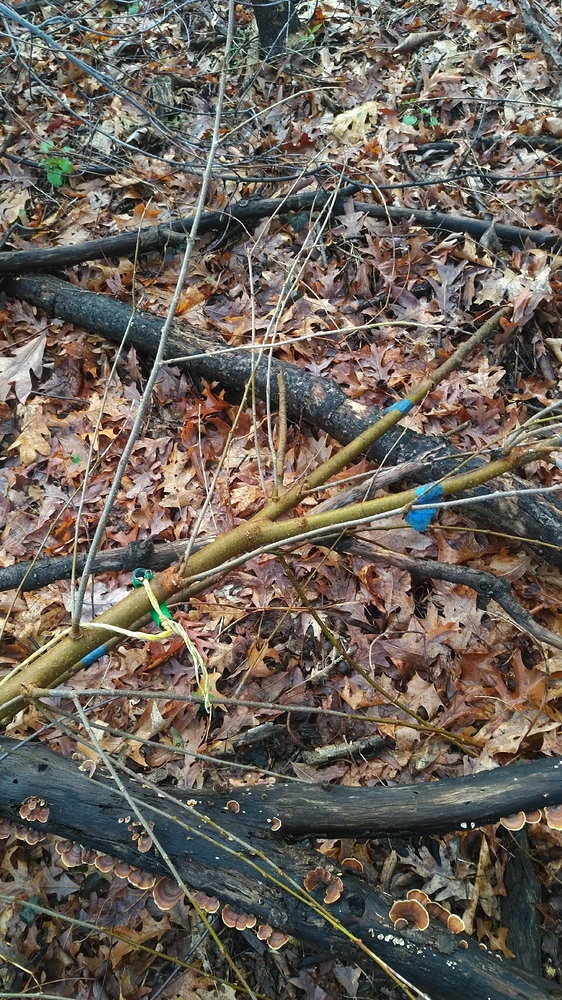 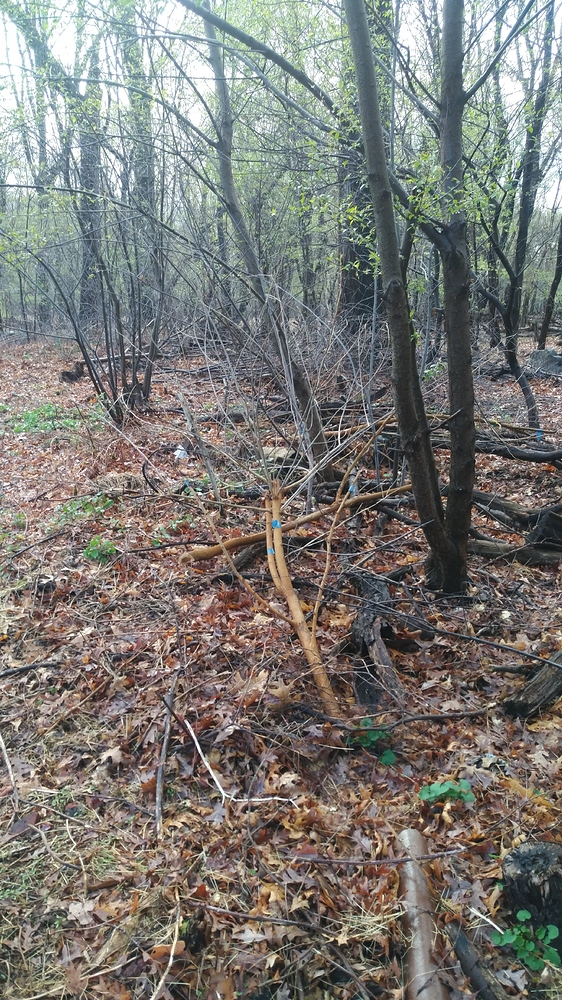 fortunately 2 or 3 seedling mulberries decided to take root on my side of the property line in the front yard. 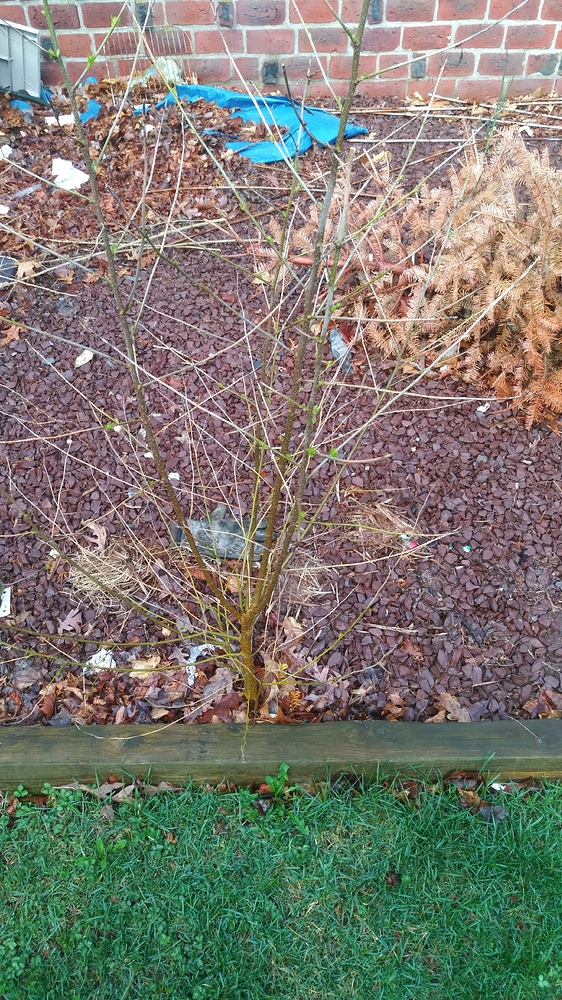 I’m guessing he didn’t want a purple driveway and roof from all the bird poop!

That would upset me, but at the same time it isn’t your land, so it’s hard to get too possessive. I suppose that if you are going to stealth graft, just do a few and stay away from blue labels which tend to stand put. One or two black unions would tend to blend in better. I suppose if you really want it to blend in, you could use some brown/green garden tape instead.

I’m not sure how far down they go, but I remember seeing @alan standing next to one which had 6+ feet long roots. I spent a few minutes looking for that picture, but it seems my search engine skills aren’t as impressive as I thought they were.

Oh that just isn’t right!!! That would infuriate me. Bob might be right about him not wanting blue poop, but I wonder if he even knows what kind of tree it was or what your grafts were? I suspect he just wanted to extend his yard clearing to other side of the fence. Does he mow that grassy area he has created that is part of the park? No one wants to be “That” neighbor, but I’d be talking to the city/county/state/neighborhood association that owns the park and explaining that you were creating natural food for animals and erosion control (roots) and cover and other good things, and your neighbor just cut it all down in an effort to claim grass space on both sides of his fence. I bet they would give you permission to graft and care for those trees, then you could put a little sign up saying “please don’t remove”. ??? Its just sad when someone cuts down a fruiting tree- even mulberry- for no clear reason!

Tap roots are a bit of a hort myth, or at least a misnomer. When they exist they can function as tap roots during drought but they are not the primary source of water for trees most of the time. They generally function more like anchor roots on species that posses them with most of the important root function (fine root growth) occurring in the top few inches of soil.

Some species do send strong shoots down when young that can be killed when they are severed- such as oak trees. But this is usually only the case with ones that don’t develop fibrous root systems early (or ever).

Mulberries develop extremely fibrous root systems, and if they eventually develop anchor roots that go very deep it happens after they are very large trees so I haven’t seen it.

Young mulberry trees transplant well if you make an effort to retrieve as much of the shallow root system as possible with patience and care. I have removed as large as 4" diameter mulberries bare root that have survived well, although the largest one never returned to full vigor or hasn’t yet. It grows very slowly and produces the sweetest Illinois Everbearing fruit I’ve ever tasted.

This tree competes with nearby forest trees and receives no irrigation so I think its stunting is at least partially attributable to excess competition from much larger trees nearby.

The fruit is so tasty because the competition is to the north so the tree gets full sunlight and restricted root growth- a key to high brix.

I’m guessing he didn’t want a purple driveway and roof from all the bird poop!

it was 25 ft past his property line, in the rear the only access is via the woods.

His wife knew I grafted on to that tree because two years ago when I first moved in I tried grafting some scions from @Matt_in_Maryland to the same tree and discussed the process… It’s not like he only targeted that tree, he cut down several buckthorns, I think, that where making there way forward towards the clearing.

The wife and daughter always seemed nice but my wife said the husband gave off creepy vibes from day 1.

This kind of neighbor thing is exactly why we passed on what would otherwise be a perfect piece of property. There was a new subdivision, and the county requires a certain amount of open space in it. They take the open space portion and use it as one of the lots, and then that owner also owns the 11 acres of open space that back up to the river. But then you’re stuck owning the “open space” that everyone else was sold on. Would have been nothing but problems… the CC&Rs wouldn’t even allow a small tractor.

He’s lucky he doesn’t live next to me – I’ve had issues with neighbors trying to acquire the right to use my property by prescriptive use. I probably would have gone nuclear, but there’s not really much to be angry about when it isn’t your land either. My guess is he didn’t even notice your grafts, and had no idea what the significance of the little blue tags was…

I have a neighbor who has jumped my fence and cut back whatever he has felt like on a number of occasions. Behind our garages we each own about 5 feet of additional property and a chain link fence divides the properties.

He’s cut, below the graft, pawpaws, he’s poisoned hops, berries and other plants. I now have nettles back there and rue. The local police feel they have no responsibility to deal with the issues unless provided video evidence. (I have a new trail cam that will be positioned in the next couple weeks.) The police have even cautioned me about jumping the fence and returning the favor, though I told them I’ve got pruners which would allow me to cut back more than half his back yard without even leaving my own yard. (ok, maybe not the wisest thing I’ve said over the years). I’ve contemplated getting 10,000 nettle seeds online and broadcasting them deep within his yard. I know that to do so would just escalate things and I have more outside which I care about.

I figure the rue and nettles should dissuade his malicious fence hopping and if he does the video evidence should provide the necessary encouragement to the local police to do more than just visit.

yea he knows. He also got upset about the rotting wood pile from the trees he cut down on public land. I am only upset about the loss of bob Vances scions. At least in a year or so I will have 2 or 3 trees on my side for them

Looks like the King of the Neighborhood has a birdhouse installed on the park’s tree.

Hi, The Wizard here
Reading some of this stuff gets me going. There’s a reason why I always say, I Hate People.
I live on a old farm with a long drive way.Some neighborhood people feel it’s great place to dump their stuff. In A gulley along my drive way. People bring their sticks and brush throw it in and 9 out of 10 times, there’s trash with it. Paper,plastics, cans, etc. you name it gets thrown in there. Heck one time there even a TV thrown in. They don’t care if they crush my flowers and bushes. They do it right by the No Trespassing, Keep Out, No Dumping signs. I don’t get it. Well my next sign is going read. Help Keep Me Out Of Your Driveway ,By Staying Out Of Mine !!! NO DUMPING!!! And yes a trail Cam is next…
I don’t even see when they do it. My house is a way down the hill and trees are blocking my view.
They must do it in the middle of the night. I’ll catch them sometime and they will not be back.
I Hate Litter Bugs !!! Just had to vent a little. Later The Wizard.

Everyone, Issues like this are never worth the risk of what could happen between neighbors in the future. Just not worth the trouble. Only thing that possibly could have made a difference would have been to consult with the guy and ask his opinion explaining that the mulberry would be there for everybody`s benefit including his. But this might not have helped? And WIZZARD…oh yes a camera for sure HD preferably with positioning to get a tag number. Display a sign “smile you are on camera” or similar. While working in retail we had some problems with people using our dumpster for their garbage…on more than one occasion they received a visit from local police thanks to our cam system! Good luck at getting this stopped. Randy/GA

I am only upset about the loss of bob Vances scions.

Let me know if you need more. I think I’ve still got some mulberry in the fridge…

Thank, but I think I will have to wait till next season.
Right now I could use your advice on improving my seedling stock. There are 5 or 6 good scaffold branches I think I should remove a lot of the smaller branches to concentrate growth to the limbs. 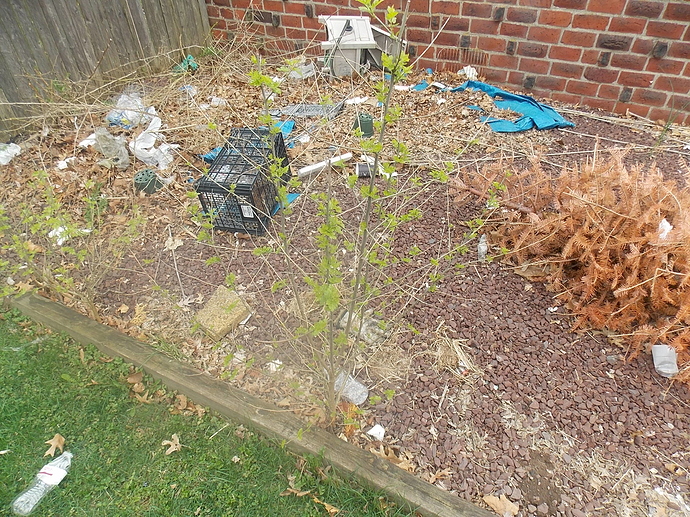 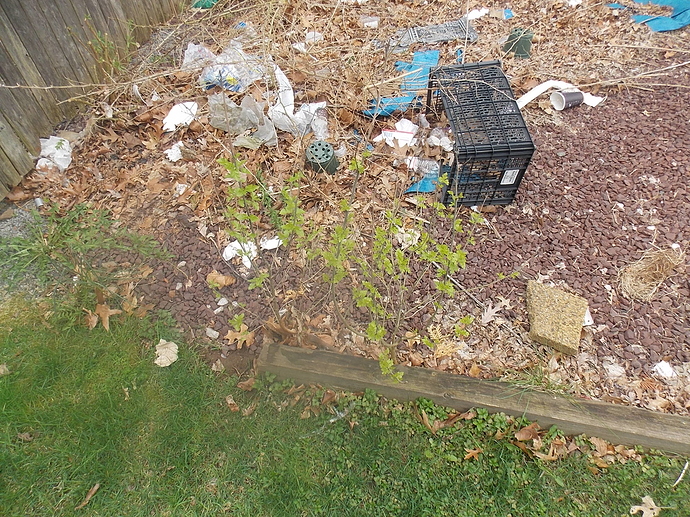 Forgive the mess that corner is a trash vortex. And I have not cleaned up this year .

Woo hoo! A captured proof of a garbage vortex opening on earth! Proof that Time Lords have no recyling programme and are making a big mess! And that is what triggered the AI garbage cans in the UK in the late 21st century to morph into people exterminating Daleks.

I am not an expert, but if you give that Christmas Tree a quick shot of 10-10-10 fertilizer you might have a chance to bring that back this spring!

In my area some neighbors were unliked because they cut peoples tree etc. . They yanked up my fence and were required by law to return it. Some people are naive about things and i told my family they were from the city and just figuring things out so i did not press charges on them for theft of fence. One group of neighbors started raising hogs about 30 feet from them until they moved! I did not stoop to that level because two wrongs dont make a right! Everyone might be angry and i would be in your situation but remember they learned that behavior from some where! When teaching someone something it might be better to bring them cookies and teach them to be kind rather than to chainsaw off their lilacs and teach them how to hate if you know what i mean. Some people are just mean and i just ignore them and dont even acknowledge that type. Good luck with them!