I found a persimmon tree a couple years ago on the side of the road where it could either have been planted by the homeowner or a seedling, it’s a very wooded area. I finally got a chance to get some of the fruits today that were laying on the shoulder of the road. To my surprise there are very few seeds and some fruits have no seeds. I went through 7 fruits and found 6 seeds. The tree itself looks fairly old and is about 40 feet tall. Is it safe to assume this tree is parthenocarpic? I’m sure it’s a Meader or something such. The fruits are mostly quarter sized. The 2nd picture shows one of the seedless fruits torn open. The seed embryos are there but the size of a grain of rice. 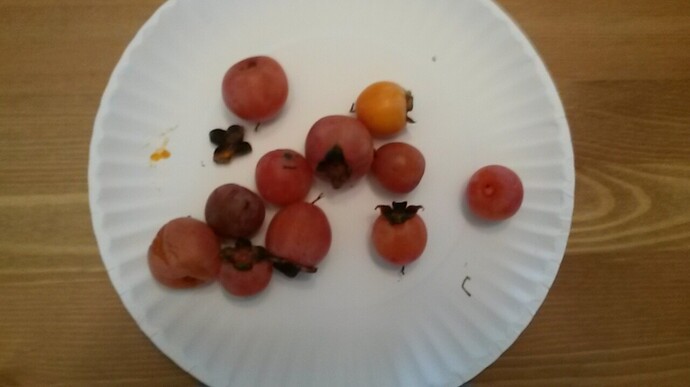 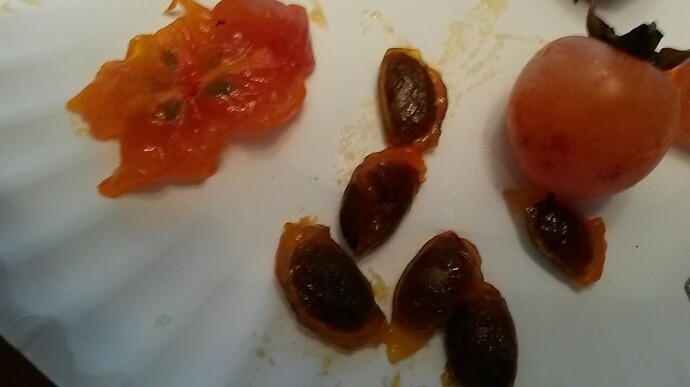 Edit: The yellow one isn’t ripe yet, and the really dark was spoiled.

Nice Find! I love hunting for persimmons, so much fun!
I found a big one a week or so ago. Definitely not seedless though. I just measured and it’s 1 3/4" diameter. I need to take a pic.

Meader was initially thought to be self-fertile because it was grown in an area that had no male trees and produced fruit. I believe the latest thinking on this by the experts has changed. One speculation is that chestnut pollen or even some dust particle had physical characteristics close enough to trick the flower into thinking it was pollenated causing fruit to develop. I think this realization came after bagging flowers that then did not produce fruit. While persimmons are mostly male or female, some trees produce both male and female branches but evidently the flowers themselves are not capable of self-fertilization.

I would guess that incompatible persimmon pollen is fertilizing these but it could even be pollen from another species.

Jack, I’ve read about the various possible modes for seedless American persimmons, I really don’t know how it would be happening in this case. I think I saw a couple of chestnut trees in the neighborhood, perhaps those are the cause.

I picked another basket this morning on my way into work, I doubt the property owners are using them judging by how many were rotting in the grass. Maybe two or three out of 15 I picked up will have seeds, judging by size. I gave my coworkers a sample, none of them had ever had an American persimmon. They all liked it but one person was not a fan of the texture.

Where are you located?

SE Pennsylvania, just outside of Reading.

You are on the ratty edge of the native zone. It is possible there are native persimmons in the area. They could be a different strain.

I found this old GW post interesting, since it’s almost identical to what I’m seeing. Again, it is most likely a planted tree but you never know. The site is on what counts for mountain here (it’s a hill) that may not have been overly clear cut.

“I’ve got one local native selection, SFES, that bears about 80% small(1”) seedless fruits, and 20% moderately larger fruits that usually have a single plump seed in 'em." 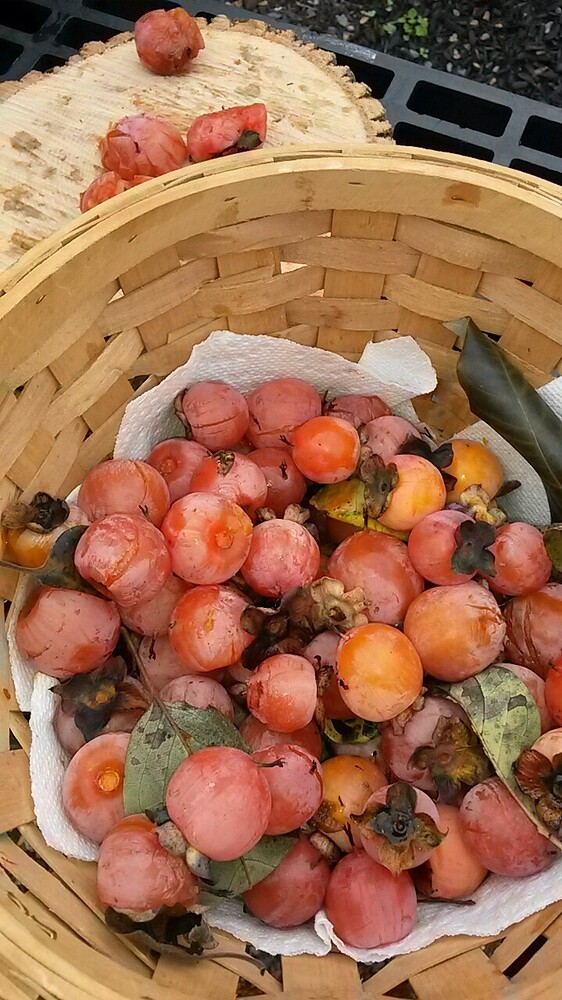 There’s a wild seedless persimmon on a neighbor’s place that I collect from every year. The fruit are definitely a little smaller than the average wild persimmon, but if you account for the lack of seeds there may be as much actual fruit (or more) as the average wild fruit. Maybe one out of 20-40 fruits will have a single developed seed. I’d say the taste is pretty average, too, which I’d say is pretty good. There was an outstanding seedless persimmon in the smallish city in my county until a few years ago. It grew near a doctor’s office I went to. It was cut down just before I began grafting persimmons. I collected the fruit one fall, as usual, then went to collect scion wood the next spring and found another office complex type building in its place. I also found a good seedless persimmon along a road nearby. And another neighbor gave me scion wood from a tree he says is mostly seedless, although I haven’t actually tasted fruit from that tree myself yet. So wild trees with seedless fruit – I’m a little less confident the tree in town was wild, although I’d guess so – definitely seem to be around, at least in my area.

My local university campus has a tree finder map online and there is a Meader persimmon I visited today and found some ripe fruit. So far one had four seeds and the other none but were both the same size. There are no other persimmons anywhere nearby.

Would the seeds be viable to grow for rootstock? 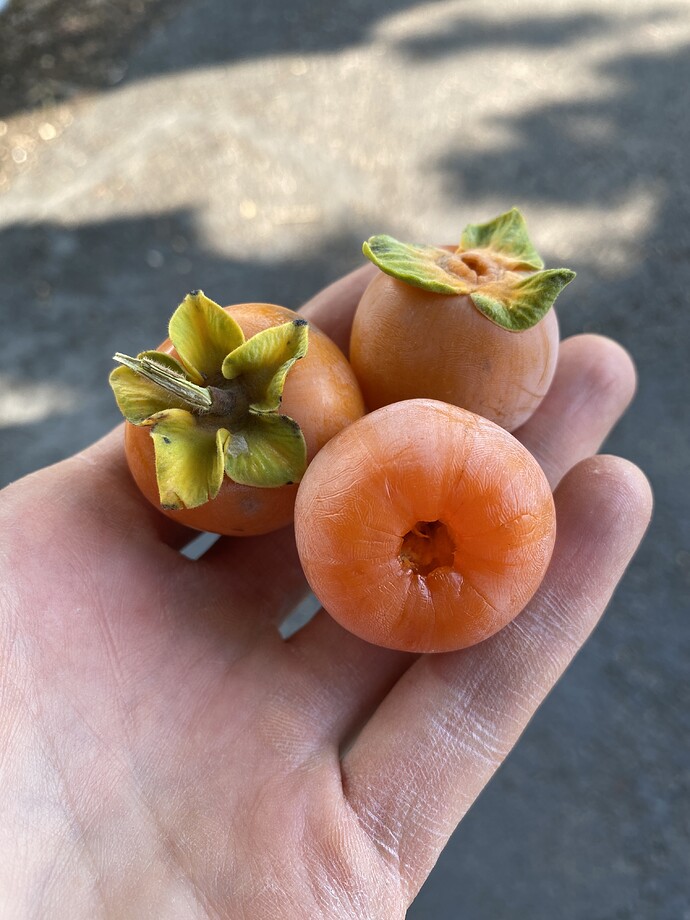 Would the seeds be viable to grow for rootstock?

Reports of it being more cold hardy that some varieties of northern persimmon are false from several things I have read and experiences of some. So I haven’t use seeds from it. But it should still be fairly cold hardy.

@snowflake I assume it would be at least as cold hardy as the parent?

I would think so although there is always seedling variability. They very quickly develop a taproot. Generally I try to get them in the ground right away or plant seeds directly if you can prevent competition. I start them in 4 or 5" deep cells and get them in their permanent spot as soon as the bent over red stem starts to become visible…at which point the taproot will be ready to come out the bottom of the cell already. Of course I still have a bunch of extras that I put in one gallon pots for some stupid reason which I prefer not to do. With your limited number of seeds, you might want to start in cells before planting out.

Should be viable but inbreeding suppression is a possibility…IIRC, Meader is a selection from the Early Golden/Garretson family…may throw branches with male flowers and pollenize itself.

I have a local native persimmon (SFES, a 60-chromosome tetraploid) that produces about 80% small (1") seedless fruits and about 20% larger (1.5"0 fruits, which usually contain a single seed.