Thanks @Hillbillyhort - good to know what it is called.

I noticed that leaf curl about a week or two ago and I thought it was something odd caused by the extreme heat we have been having… but today I noticed that the newer leaves that came out above those looked normal (and it has still been very hot) and just those few below had that. So I started inspecting it more and found those critters. I gave them a hard time with a brush and seven spray… hope I did them all in.

I’ve been picking these out of my rhubarb blossoms and thought I’d like to know what they are. But trying to ID a “black beetle” online is a needle-in-a-haystack search. I think I’ve seen photos on GF to something similar but didn’t know what to search for so here I am with my question photo. I thought they were the same that I earlier had picked out of my aronia blossoms but looking closer at the photo they are similar type but not the same (aronia’s were more pattenred black/gray or browns). (I didn’t think to take a photo of them). Sue 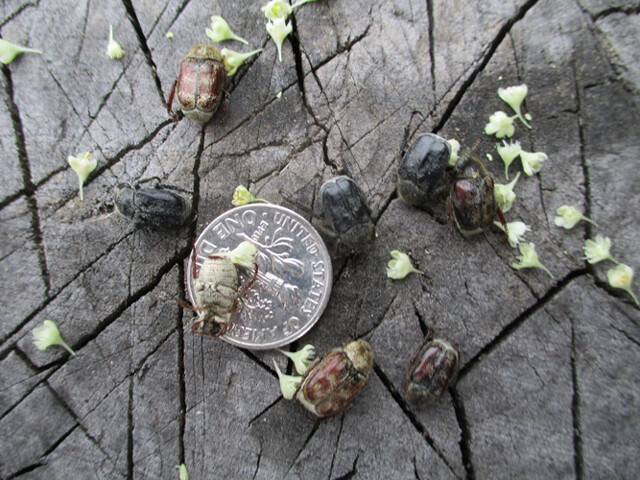 Maybe some kind of leaf beetle, Cryptocephalus fulguratus.There are quite a few in the Chrysomelidae family.Over 37,000 species,if that is what they are.

The beetles above lack the long antennae of the proposed leaf beetle.

Your beetles are scarabs, probably one of the fruit and flower chafers.
I will look for a species ID as time allows. But habits and control will be the same for any chafer beetle.

All scarab beetles, regardless of size, are built like tanks and have short, comb-like antennae, I think one antenna is visible in the left-most beetle, above. The rest of the antennas are held too close to the body to see.

I could not find a good match in the Chafers, but in the May Beetle and June Bugs (these are scarabs), this is a good match:

Also, for this genus, there are black males and brown females, like your photo.

If numerous, these would be a pest insect.

@LarryGene thanks so much! I’d tried about every combination of words I could think of when searching for an ID, but didn’t think of Chafer. And I couldn’t find anything even closely related to either aronia or rhubarb so maybe they aren’t specific to those flowers. I’m pretty tolerant of insects but my aronia flowers were full of them and I guessed that wasn’t a good thing. Several pickings several days apart took care of them. Same with the rhubarb. Now that I have a good direction I’ll read up more about them in general. I’d seen them here and there in years past but never so many all at once. In looking closer at the rhubarb ones I think they are the same as were in the aronia. Sue

By searching State specific not plant specific I found this online in a bulletin from Michigan State Univ. And since we have wild blueberries all around this ID makes even more sense. it does appear that you are correct with the Hoplia trifasciata ID Larry Gene.

“The warm weather over the past few weeks has brought out one of the earliest scarab beetles we find in Michigan blueberry fields. This species is a Hoplia flower beetle (Hoplia trifasciata) and the adults feed on young buds and can also feed on flowers…They prefer flower buds and leave ragged feeding on the buds and on the flowers from their feeding.”

It sounded like they really didn’t know if they did much damage or not, but it wasn’t of big concern.

Thanks for confirming my ID by using a scientific source–MSU would know far better than I.

Universities and Ag Departments usually only study insects that are of commercial importance (damaged crops). One online source mentioned that if over 2% of blueberry blossoms are eaten, time to break out the poisons.

MSU is using the common name Hoplia flower beetle. At Bugguide, they have them in a Genus of “Monkey Beetles”, specifically the “3-lined Hoplia”, a curious common name because I do not see the 3 lines on your beetles! (most insects with common names of “lined” have distinct line markings. In this case the “lines” may be referring to some other anatomical part.

From Male and Female Monkey Beetles | The Backyard Arthropod Project
" They are evidently called Monkey Beetles because they have a tendency to hang by their hind feet from things and sometimes do a sort of somersault."

Nice 2nd photo showing the wings, @ncdabbler ! That really does help. Glad @LarryGene and @Bradybb were able to chime in.

@Sue-MiUPz3 thanks for sharing, this is a scarab-type beetle I haven’t seen yet. UMN seems to suggest that the colouring depends on sex, which I find interesting. How neat that you found them attracted to your rhubarb flowers! I will have to remember that for next year. On another page, UMN comments that they are attracted to Prunus and Amelanchier too.

alleyapples: Interesting; the UMN versus the Bugguide text or images have the gender colors reversed.
Most sources state that the males are black. Bugguide does not claim to be authoritative.

How about this guy? Found on apple leaves. 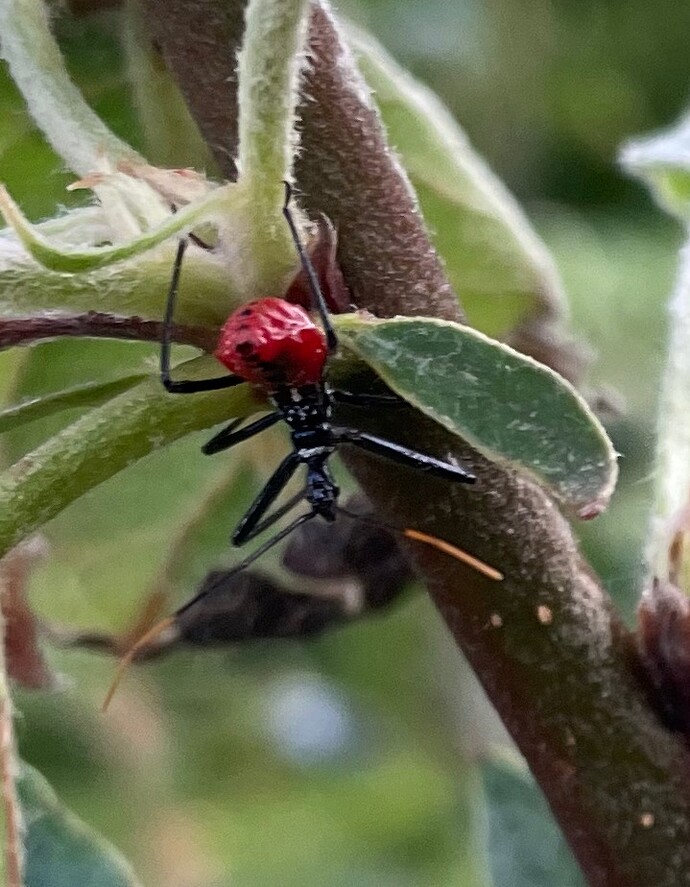 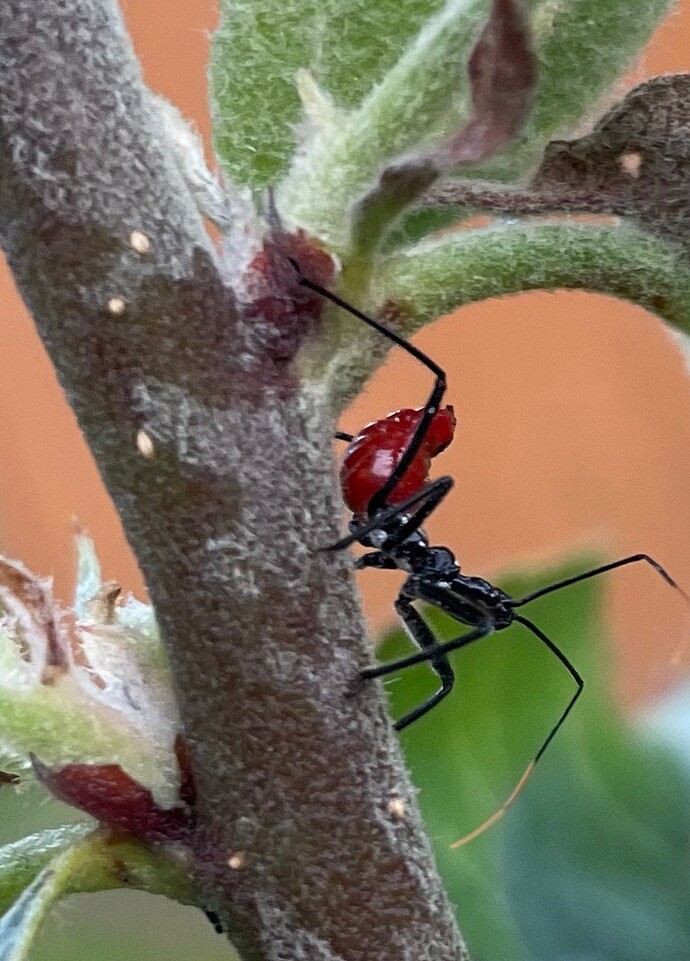 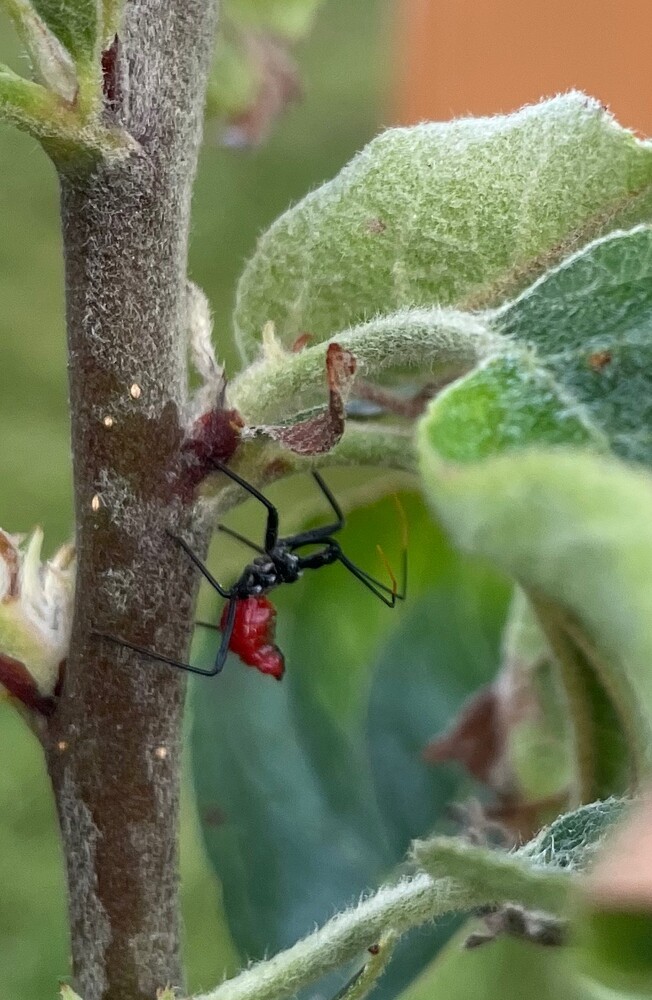 That looks like an Assassin Bug.Be careful,they can jab with their pointed mouth-part.They are an insect killer.

@NJpete Wheel bug nymph! Lucky you! They are awesome predator insects. They eat all kinds of bad bugs. I have a lots of them this year. Just…don’t grab one. They have quite a bite. They go through several different stages, so they will look a bit different as they get older.

This is an adult I found eating Japanese Beetles a few years ago. This year, the juveniles were catching them on my hazelnuts. 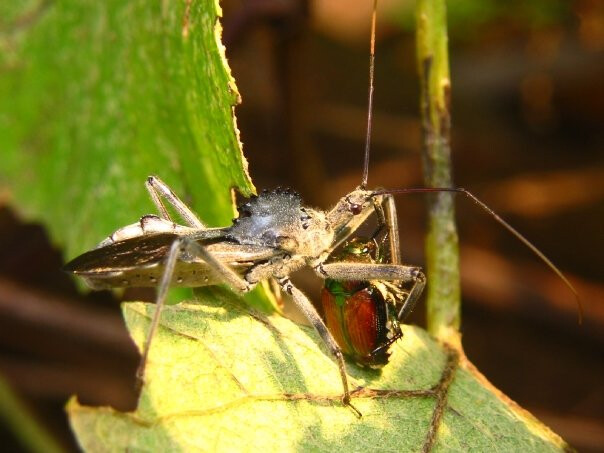 Wheel Bug is the more specific ID as they are a Genus in the larger Assassin Bug Family. 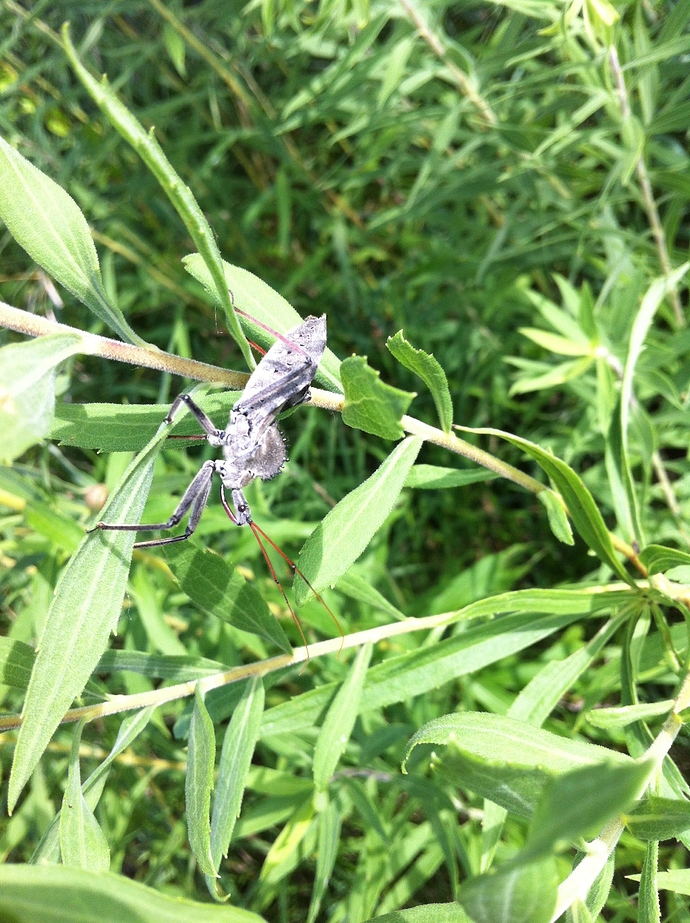 Great! thanks for the photo of the adult. I will keep my eyes peeled for them Now I need to convince them to move over to the hazels when the grow up to feast on the J beetles there.

Wow… that’s a big bug! My little fellows have a lot of growing to do. Thanks for the tamu link. It seems to imply it is stink bug relative. 'Bout time some useful stink bugs came along.

They are not close relatives (different Infraorders), but more like 4th cousins, twice removed.