Can someone please identify this plum. It is large with a very waxy skin. It is a bit more fibrous than most plums, sort of like a mango. It has a bit of a peach taste. I grafted it a few years ago and lost the records on it. It is ripening now on zone 7, later than most of my plums. 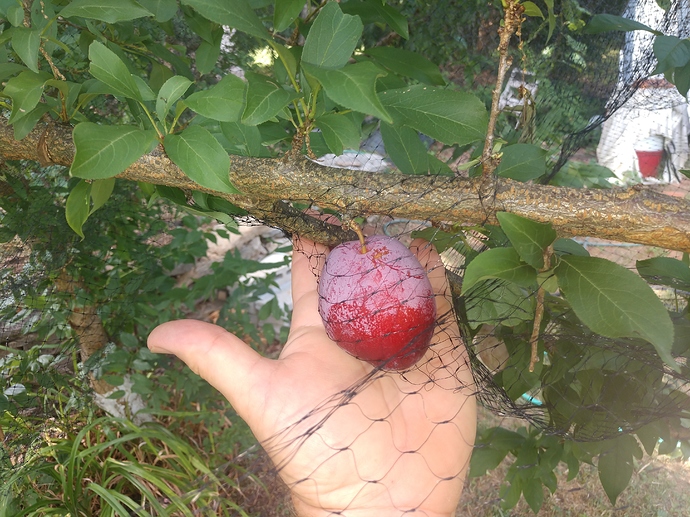 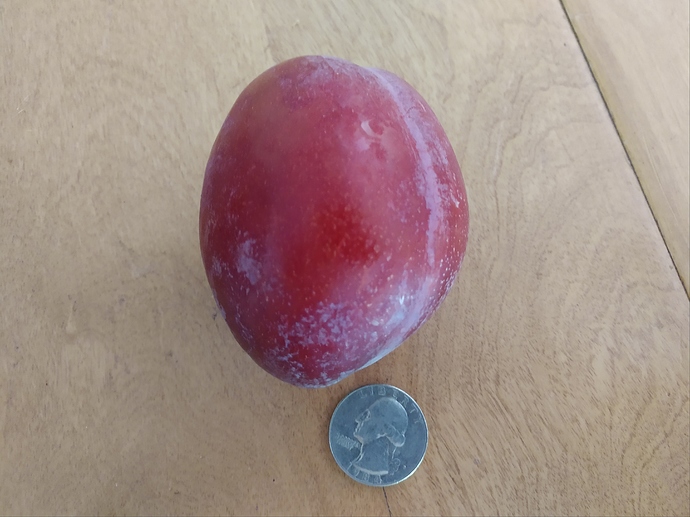 I’m afraid that I can’t identify the plum that @Graftman posted, but I’m hoping he won’t mind if borrow his topic for a plum ID request of my own. Does anyone recognize this one? It was just picked from a friend’s tree here in Northern California, so it’s obviously pretty late-bearing. 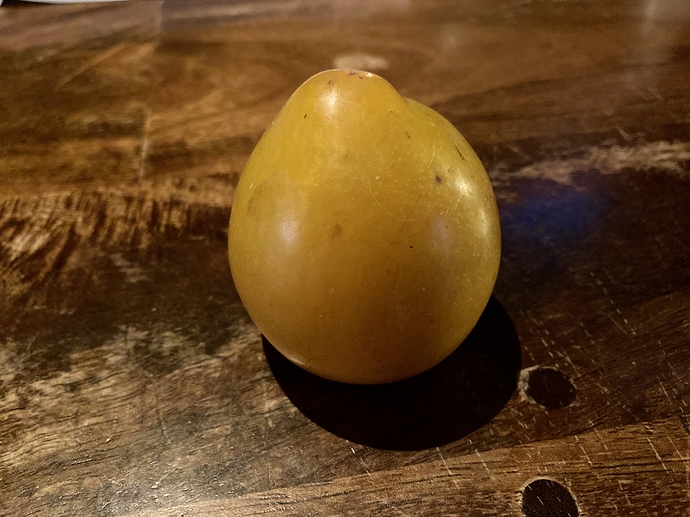 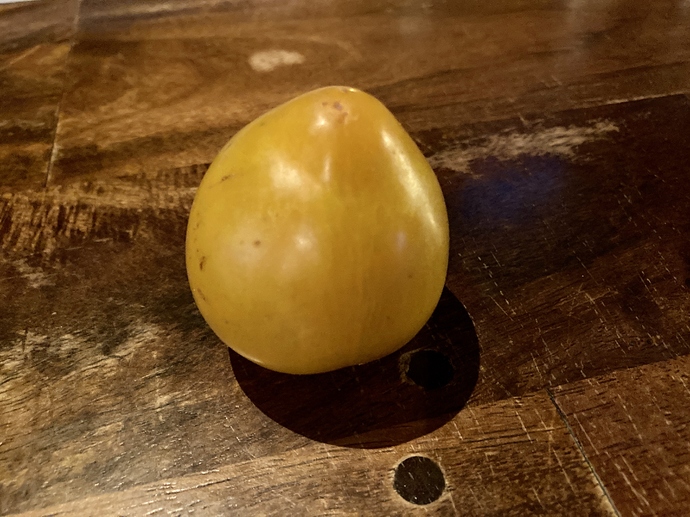 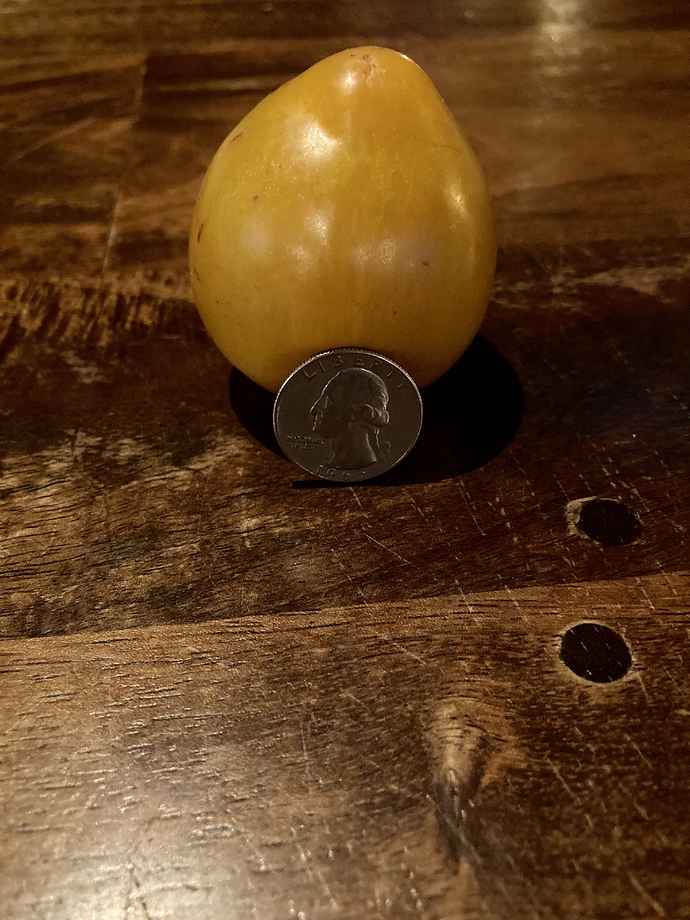 Those look real close to Golden Nectar Plum,but the harvest window is the last two weeks of August,in Hickman,CA.It does get hotter there though.bb
https://www.davewilson.com/product-information/product/golden-nectar-plum

It sure does. Thanks, folks!

Jerry, that’s a beautiful plum. How does it taste?
If it is good I would love to get a scion from it this winter.

Also I named this thread so that it could be useful for others to post unidentified plums. So everyone is welcome to post on it.

Tried it this morning - I just had one sample - and it was quite good. Firm and sweet inside, nice tartness near the (thin) skin.

You likely can find Golden Nectar scions closer by, but if not, I’ll ask my wife to try to get a scion from the friend that gave her the plum.

Jerry, I thought you had the tree. I don’t want to ask that of one of your wife’s friends. I am interested in yellow and green plums. Maybe the birds would leave them alone.

Thought I’d piggy back on this thread as I figured why bother starting another.

A family friend planted a plum tree on my families property 40 years ago. The tree is now probably 40 feet high with a massive spread. I have no idea what variety it is, and was hoping others might be able to help.

The plums are small and are pretty much ripe now. We haven’t had rain in well over a month and this tree has not been watered the entire time, so I was figuring the plums would have very concentrated flavour (not washed out). Unfortunately the flavour was rather bland and disappointing.

The fruit is very similar in appearance to a very large Cherry. The pit is relatively small and clingstone. The skin is not very astringent. While the fruit seems fully ripe and is fairly sweet it has little flavor. For comparison a Shiro plum tree on the property is probably at least 10 days away from ripening. The other Euro plums on the property are ages away from ripening.

Most of the plums have a Cherry like appearance, but some riper specimens higher up on the tree that I could not reach were turning a very dark purple shade. The flesh is an appealing amber/reddish shade. Sadly the flavor does not match the appearance.

Here is a pic next to a Canadian 25 cent piece (the same size as an American quarter). 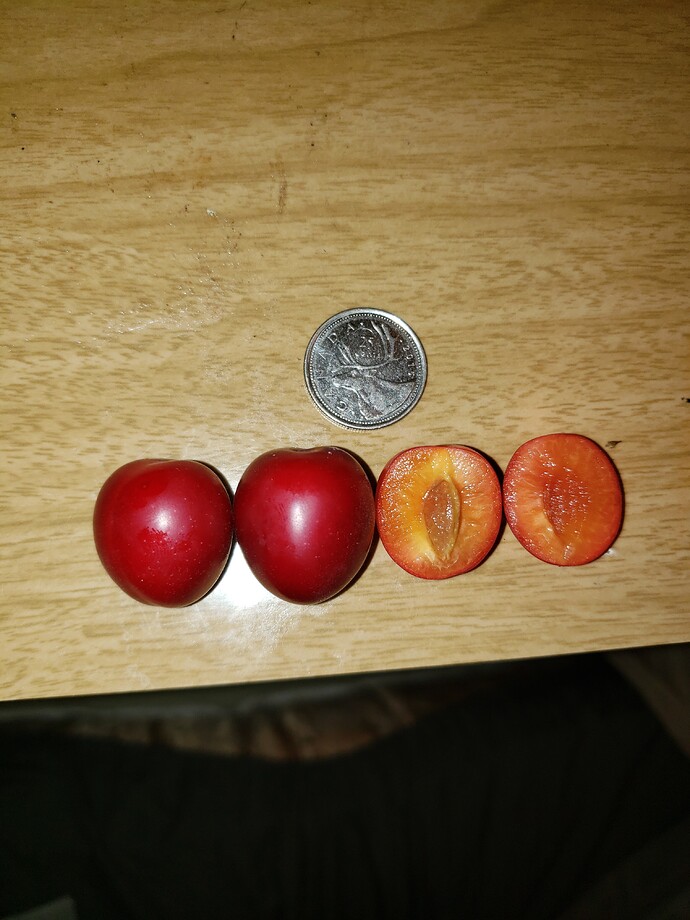 Does anyone have any idea which variety of plum this may be.

It looks like the wild American plum. They have a lot of variability from tree to tree. Anywhere from delicious to hard until after frost and then just watery.

We do not grow those species naturally on the west coast of Canada and I have never seen the native American plum trees in our local nurseries.

I thought those were a smaller tree/shrub with a propensity for producing a ton of suckers. This tree is huge and not really sending up any suckers.

I’m not saying you’re wrong, I just find it puzzling as that variety is very hard to obtain in Canada on the west coast. I have only seen it listed at a few Canadian Nurseries back east. These nurseries are prohibited from shipping to BC as our provincial gov’t does not want our fruit growing industry infected by disieses prevelent back east. Perhaps it is a Canadian native plum Prunis Nigra. Although those are also not a local species here either.

Generally nobody plants those varieties because of their poor fruit quality. The tree was purchased at a local nursery way back when (I believe).

I have no idea when those species ripen. Perhaps you are right, as it is considerably earlier than other Japanese or Euro plums here.

Do those species often get used for rootstock? Perhaps the cultivar graft failed and the root stock has been growing all these years.?

Probably not a wild American plum if there are no suckers and the tree is large. There is a chance it could be an improved cultivar such as Waneta, pembina, or pipestone. There are so many plums out there it’s hard to say what it is. What are the shape of the leaves?

You might check with the nurseries on Salt Spring: AppleLuscious http://www.appleluscious.com and Salt Spring Apple Company http://www.saltspringapplecompany.com

They only sell Apple trees, and I guess it’s really not that important. The poor flavour and small size of the plums probably means that I will take it out. If it is a native plum I’ll probably graft a few branches to my hybrid trees for pollenizers. It’s likely too far away from the main plum tree plantings to act as a pollinator for others, so not much use keeping it.

What are the shape of the leaves?

I’ll have to snap a pic. We’re in the middle of our second heat wave now and I don’t feel like braving the afternoon sun ATM. My young trees were just starting to recover from the last one.

If you decide to get rid of it and the roots are strong you may consider top working it. With strong roots you will have fruit on your grafts in no time.

Bizarrely the tree has almost collapsed under its own massive weight. The tree itself is very healthy, but the trunk of the tree is at an unbelievable angle to the ground (as in almost horizontal at ground level). Top working isn’t an option I think. I might just take it down to ground level and try and get some good vigorous vertical new growth to graft onto.

I agree it would be a waste to totally kill the tree’s root system which must be massive. I have a very large 100 year old pear tree in the same vicinity and the plum tree dwarfs it in comparison.

I think you nailed it from the description and pictures on this fedco seeds listing: 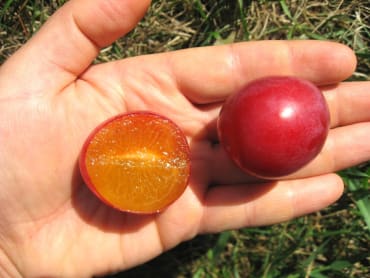 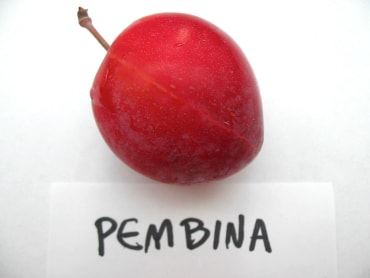 Large pointy bright red half-freestone fruit with bluish bloom. Dark golden-orange flesh is firm and apricot flavored. One of the first of the hybrids to ripen in summer, about the same time or a bit earlier than Underwood and well before the bulk of the plum crop

It was a great addition for northern growers in the day but today there are much better choices such as Black Ice. The developer of the plum, Niles Hansen had a remarkable life/career. He made trips to Siberia to bring back hardy genetics. Developed many plums, apples, and roses. He had red fleshed apples. He is also the father of alfalfa.

This plum is not ripe yet but kinda has grey hue right now. First time fruit, so don’t know it stays this way or going to turn red. Can anyone tell me what cultivar it might be?

Also any suggestion on treatment of shot hole at this time of year?

It looks like some of the dappled pluots. I have a Dapple Dandy pluot that has that look a couple weeks before it is ripe.