Identifying a volunteer strawberry before it fruits?

I posted about this seedling in “questions not deserving a whole thread” last June when it was still very small, but thought maybe I can get at least a species-level ID now that it’s a bit larger. Here’s the old post:

Questions not deserving of a whole thread General Fruit Growing

Over the winter I removed an invasive (Chinese privet) tree beloved by the birds, and I’ve noticed that all around the stump, in addition to its own seedlings, there have been a lot of berry seedlings (mostly blackberry), but it had been awhile since I weeded around there. Was just pulling stuff and spotted what I believe is a strawberry seedling: [PXL_20210630_202331196] Does anyone know of any way to ID the species before it flowers/fruits, or do they all look too similar at this stage?

Here are some photos of the patch that one seedling has turned into since then: 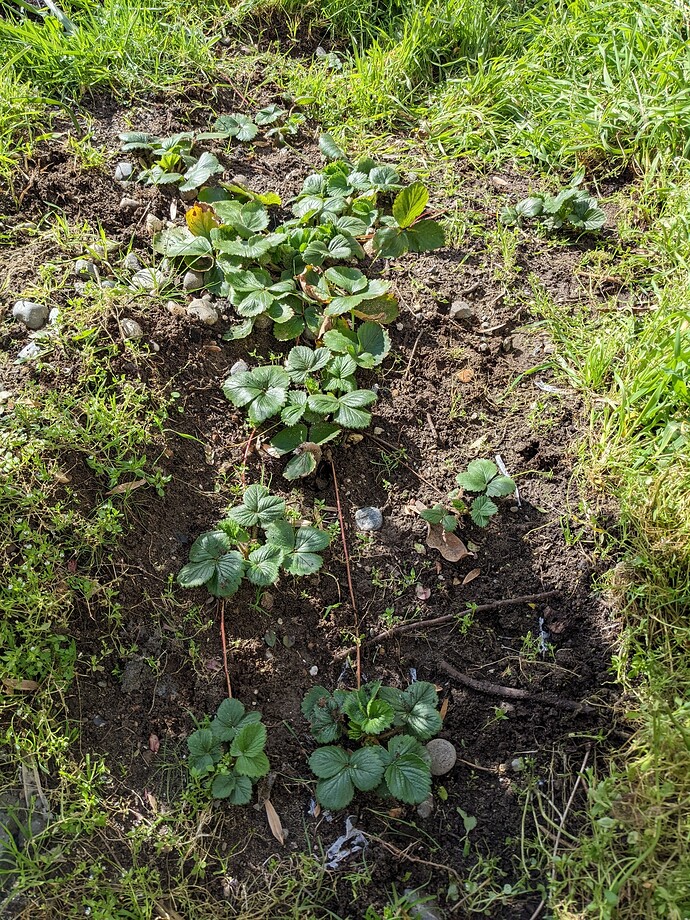 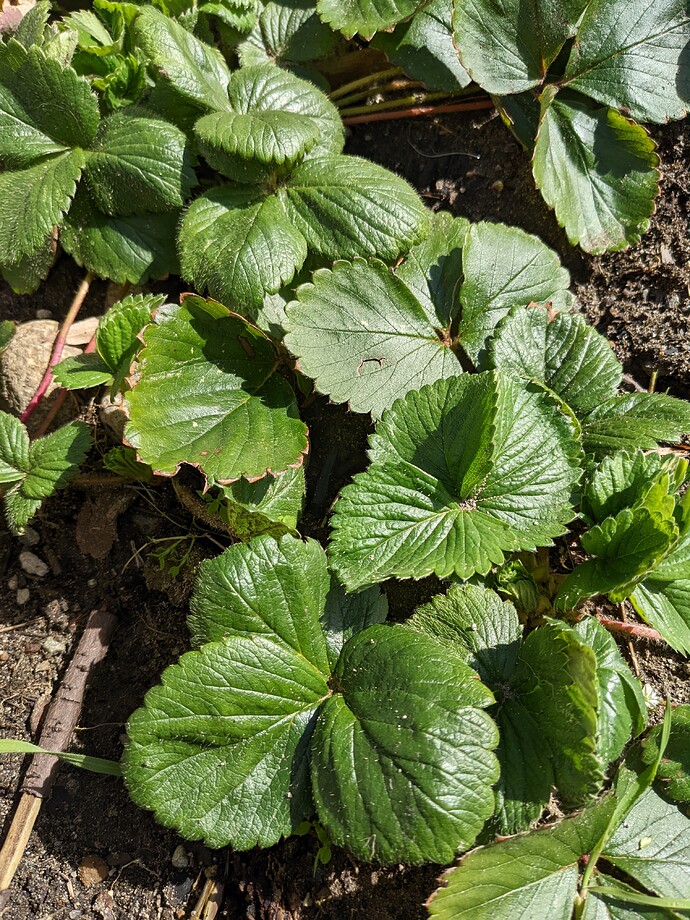 I assume they will flower this spring, which I’m sure will help with an ID.

I’ve never really grown strawberries before, but after seeing how well this seedling has grown in less than one year, I’m going to try to put different strawberries all over the yard this year. Or maybe just separate these and spread them around the yard if they make good fruit.

If it’s a seedlng, you have the option of giving it an ID or a name…as it doesn’t have one.

I just mean to identify whether this is a domesticated hybrid or one of the wild species found in these parts (either F. virginiana or vesca or maybe chiloensis).

Found another strawberry volunteer in the corner of another plant’s pot in the greenhouse. I wasn’t growing strawberries, but birds visited the ground cherries and grape tomatoes in the garden (leaving plenty of little gifts), and I used some of the garden soil in this potting mix. I’ll have to look around and see if any immediate neighbors have strawberries, but I don’t think so. They are a pretty common sight around town, though. 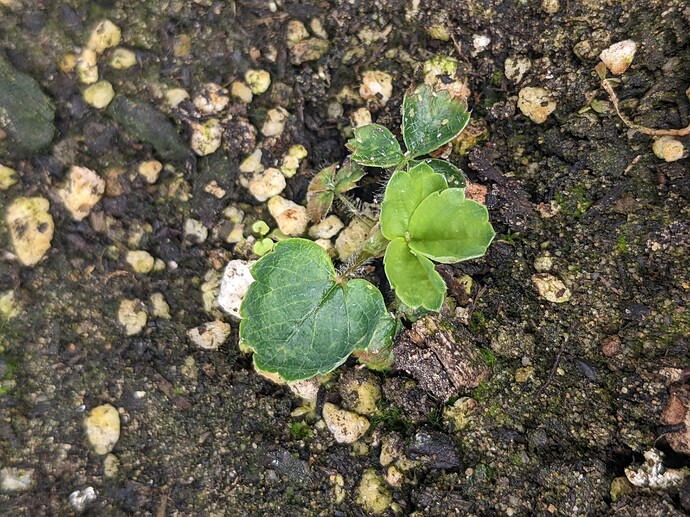 To my eye this lacks the deep green glossy and thick appearance of F. chiloensis. The leaves make me think either F. virginiana or its hybrid F. ×ananassa which I believe can be both naturally occurring in some areas or of garden origin.

The tendency to have a short central point on each leaflet should rule out F. vesca.

According to Wild Plants of Seattle the most common local wild population is F. vesca var. bracteata, so that would be my default assumption without a specific id, but I am not skilled in identifying things based on illustrations. 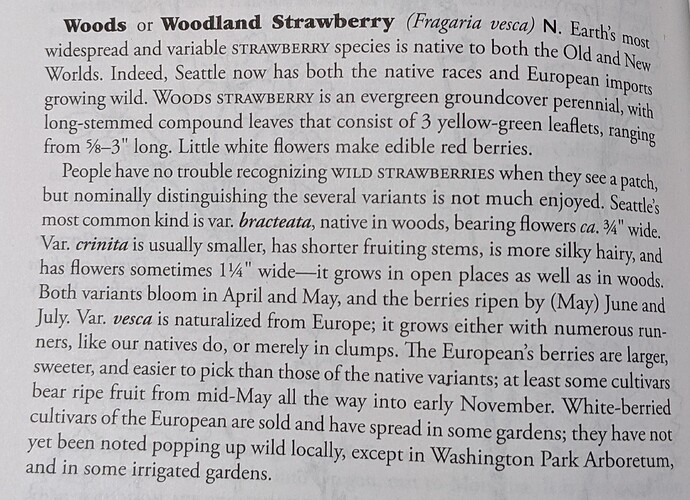 Are you disregarding leaf morphology?

This book only illustrates that one so I have nothing to compare it to! I guess I will just patiently wait for it to flower and fruit, and then I’ll know whether to keep it around regardless of the ID

Leaf morphology alone rules out F. vesca as I explained in a comment above. F. vesca var. bracteata is indeed common, but that’s not it in your pictures.

Pictured here is F. vesca var. bracteata growing around a larger F. ×ananassa I don’t have any examples handy of F. chiloensis or F. virginiana. 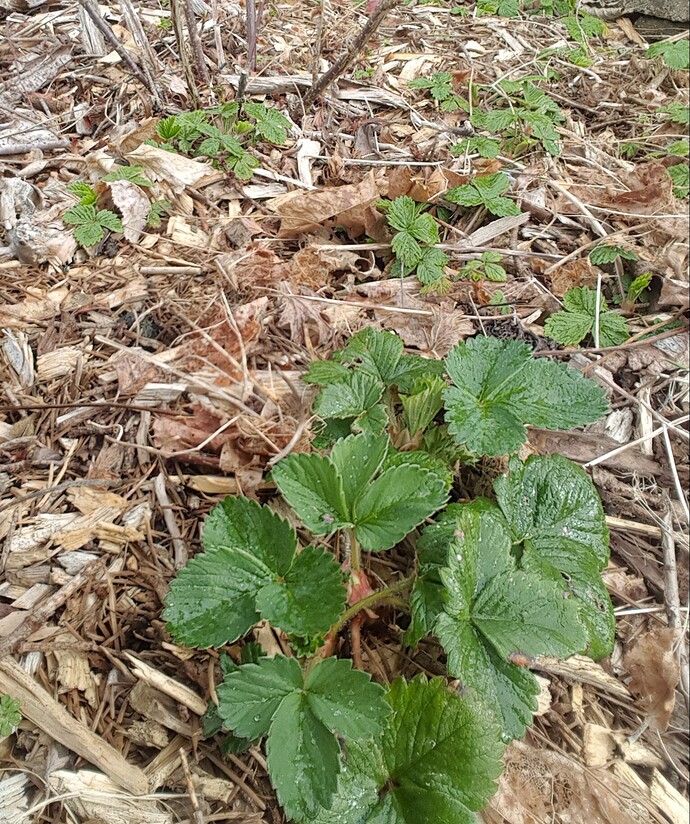 If fertilized, the wild F. vesca var. bracteata leaves do get larger, but still always look rather delicate in contrast to the other species discussed here.

Just noticed yesterday that the mystery seedling patch is starting to open flowers… is it clear whether these are male or female? 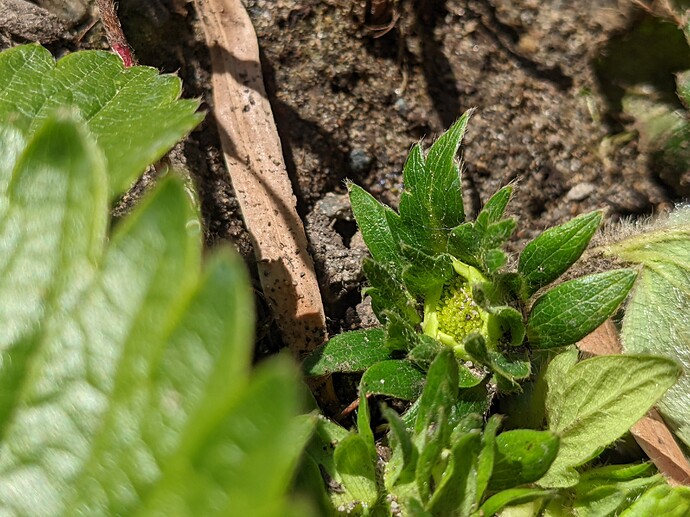 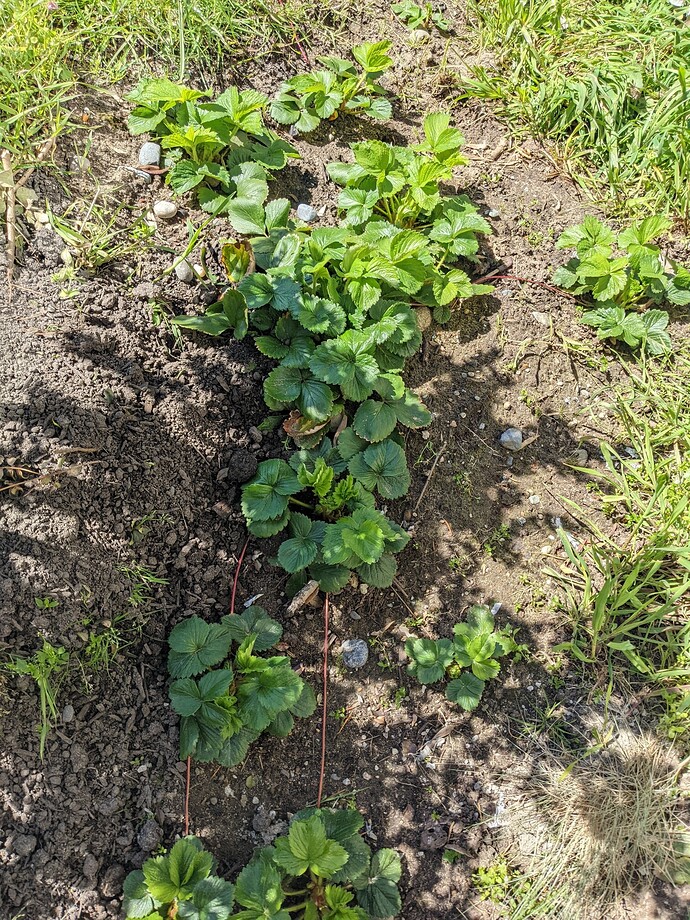 At least my strawberries are self-fertile, not requiring a male or female plant. It looks like you’ll have strawberries this summer! If you have squirrels and the patch is not too big, you might want to put up a barrier.

At least it isn’t the mock strawberry. It has plagued my yard for a few years now.

Ideally I’d like them to eventually be the main groundcover in that area of the yard, but that will of course depend on the quality of the fruit.

I keep planning to get some strawberries, but never get around to it, so if these are any good then it’ll be great having a source of starts for all over the yard.

As far as the squirrels go, they seem pretty preoccupied with the bay nut tree and leave the rest of the yard alone for the most part. Slugs and snails, on the other hand, eat everything that’s low to the ground. I never knew slugs could be so voracious and plentiful until moving here to the PNW. I’ve heard they like strawberries, too.

Do you have those gigantic slugs like what I witnessed up in Vancouver, BC? I was shocked at how huge they were and I could definitely see them wreck a garden.

We have slugs of all sizes! The biggest ones (banana slugs) mostly eat mushrooms I think, but there are two or three species that seem to specialize in tender leaves and fruits. Lift any dandelion leaf in the yard and there’s likely at least one slug hanging out munching on it. Sadly the dandelions seem to take it just fine.

I found this image for Oregon and I think it’s pretty similar here: 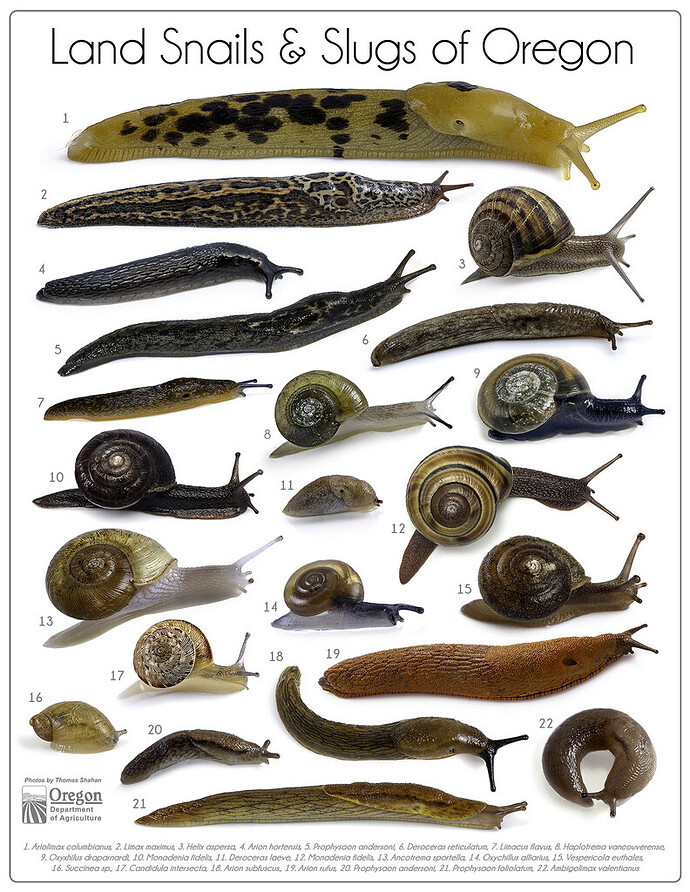 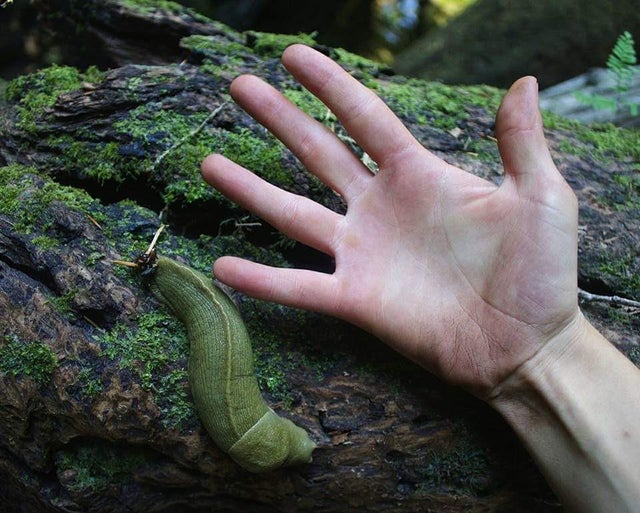 I saw several black slugs close to this banana slug size. I couldn’t decide if they were gross or majestic.