This is a copy of a message I posted on the the O’Henry thread.

I was away for 2 weeks and wee had a mini heat wave with temps in the 80’s here last week. Last weekend was probably the best time to harvest if I wanted any storage. But, this is a young tree and only had 9 fruit so, inadvertently,I got the perfectly tree ripened version of this peach. 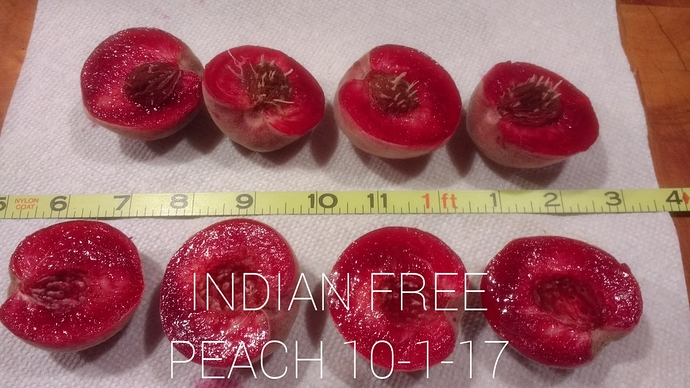 Beautiful. Need to get this peach on a wish list.

What is amazing to me is the color variation on this fruit. Mine had almost no red, but were very fine in quality (19+ brix). I wonder what produces the red color. 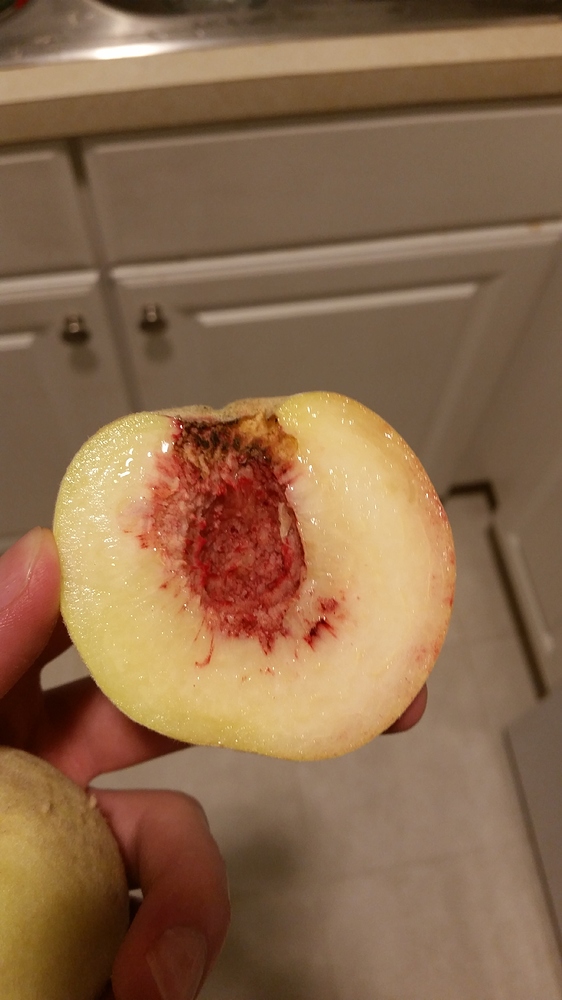 Just picked this guy this morning, can’t believe how good these are. A nice added bonus is because they still look green on the branch the squirrels haven’t gone after them.
20171001_100913|562x1000 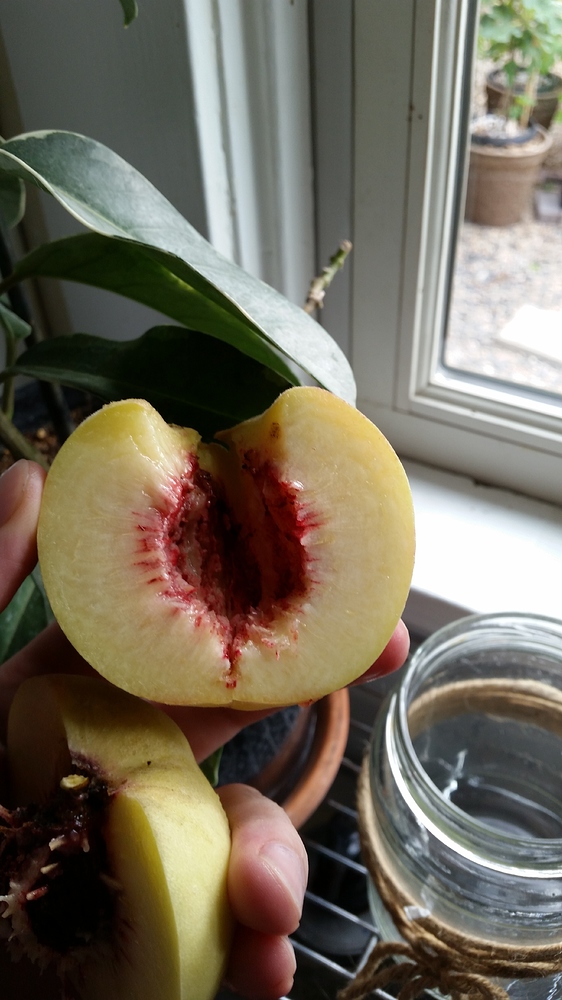 Tried to post this pic too, but it didn’t show above. 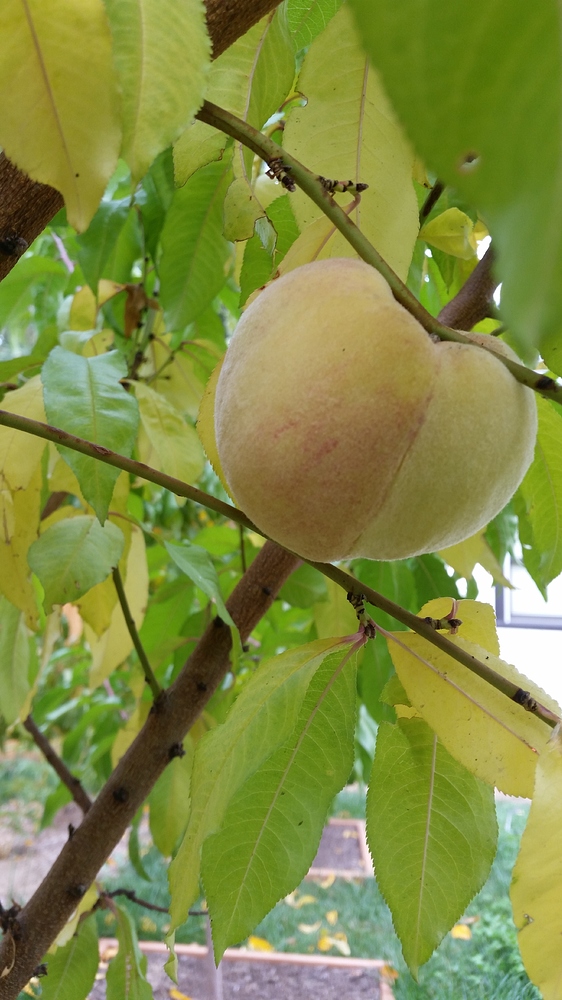 Are you sure you are not too “seasoned” to be talking like that?

What I like best is that it is such a late peach.

Are you sure you have INDIAN free .

Both the inside and outside of that peach look too much different.

I’m leaving that one alone except to say my trees keep me young.

I think photos don’t always pick up colors well but leaves and stems do look like IF in photo. The peach doesn’t darken as it ripens- they are born dark.

Mine looks more like Phillip’s Peach.I reported that the first one tasted,was about 13 brix and was okay.After leaving a couple others on the table for a few days,the number approached 18 and people that tried them,thought they were very tasty.
That is a cool color,Mike. Brady

Yes, i am sure it is IF, a few of my younger peaches that i lost early in the season had more red to them. Ripening time, taste, fuzz and leaves also match description.

The yellow/white do look like IF, but I never seen ones that big.
The reds ones too, although mine never get that red.

My theory- peaches come pretty true to seed because they are self fertile. Indian Free is a very old variety that was never patented, so it is hard to know how much slight variances are the result of environment or from being at least slightly different clones. It is such a distinctive peach that there is room for quite a bit of variation for it to remain in the same club. I’d throw in the possibility of mutations, but I don’t think that peaches mutate nearly as often as apples. New varieties don’t seem to come by way of sports often.

Have to admit that I barely know what I’m talking about. My brain lacks the data and perhaps the power to wrap around the fine points of genetics.

Wow. Those look incredible. I’ve failed at grafting this variety the last two seasons. I’m really temped to purchase a tree next spring. Would be great harvesting such an interesting peach in early october.

I have no idea what produces the red pigment, but I also live in zone 5b New York. This year has been cooler and wetter than last summer, which was hotter and a drought. And I must say the red pigment in the Pink Pearl apple was more pink than I’ve ever seen in any photo - it looked almost purple. I definitely see more pigment in the photos that come from lower zone areas so cooler temperatures maybe? 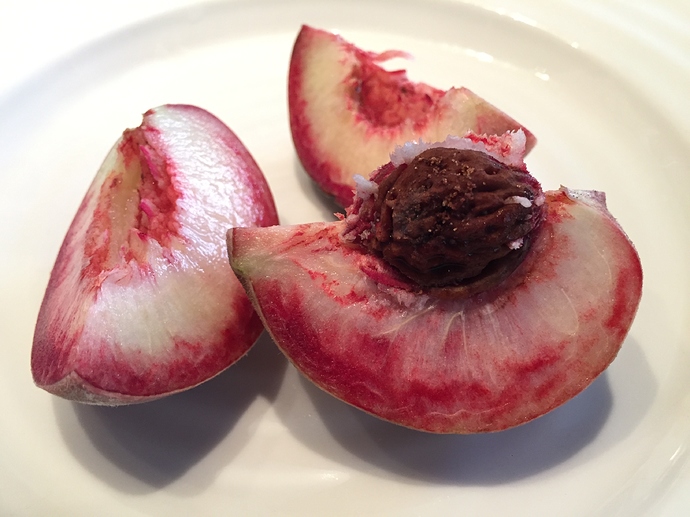 Harvested a few Indian Free over the weekend. It’s nice to have peaches this late in the season, and they were surprisingly good considering how much rain we’ve had the last few weeks. I wonder if I’d left them longer if they’d have turned redder. For people that have harvest these over a few years, does the redness of the flesh change in intensity from year to year?

We just harvested Indian Free here yesterday. Ours look like the photo @Phill_Boise_7a posted above. The taste is really awesome, sweet, very juicy and lots of flavor!
We had a ton of red on our Silver Logan peaches last year, and they are supposed to be a white fleshed fruit, so I think the amount of red is highly variable.

I think they fluctuate both year to year and peach to peach.

Mine are mediocre this season comparatively speaking, but still a welcome treat this late. However, Heath Cling is even later and, based on last few years, a whole lot more productive. No red in the flesh though but a very good peach to have heated with the oatmeal or over waffles as I use them- the peachy flavor is there. I do eat a few raw and straight as well and they are plenty good enough to enjoy like that too.

Yes it varies, but Steven, those are fairly red. If you process them, they will look very red. I have not harvested mine yet. Not ready here. I did just make a smoothie from last year’s and it was fantastic.Held up fine for a whole year. Indian Free is great for processing. Works well, tastes like no other peach, well except other reds I suspect. Arctic Glo flesh is all red, or can be, but the taste is not the same. i can tell them apart. i like them both and hope to growing out crosses of them. I had 3 seedlings, but an early frost last year killed them. I crossed some more this year and will grow them out.

I had 3 seedlings, but an early frost last year killed them. I crossed some more this year and will grow them out.

I pollinated these with Pallas peach and Honey Royale nectarine. I plan on growing out a few seeds and seeing how it goes.