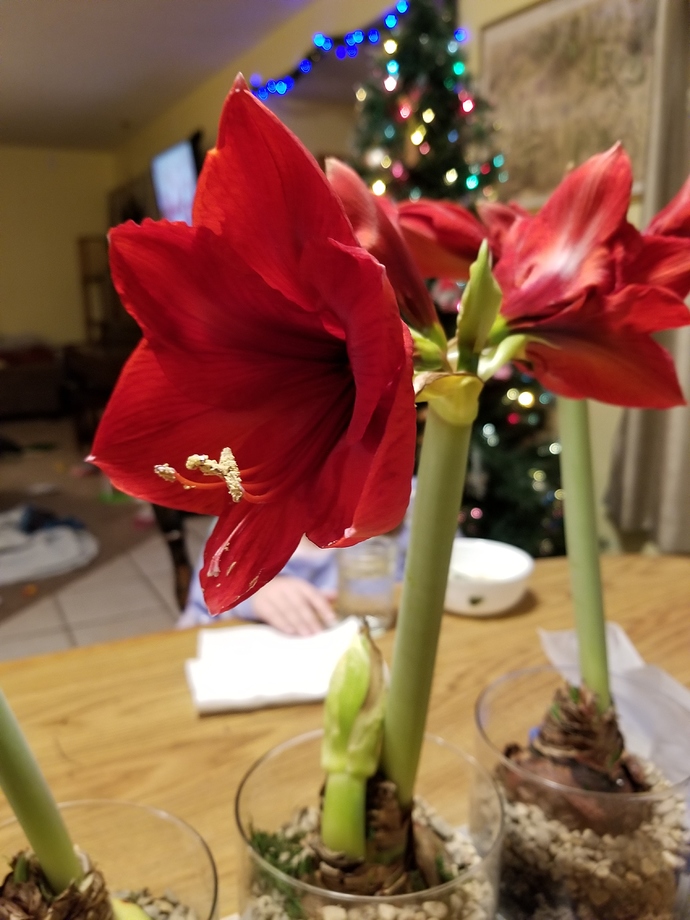 amaryllis3024×4032 2.9 MB
This is my first year growing amaryllis. Last year I grew some Japanese dwarf morning glories, which were cute, but lacked the WOW factor of amaryllis! 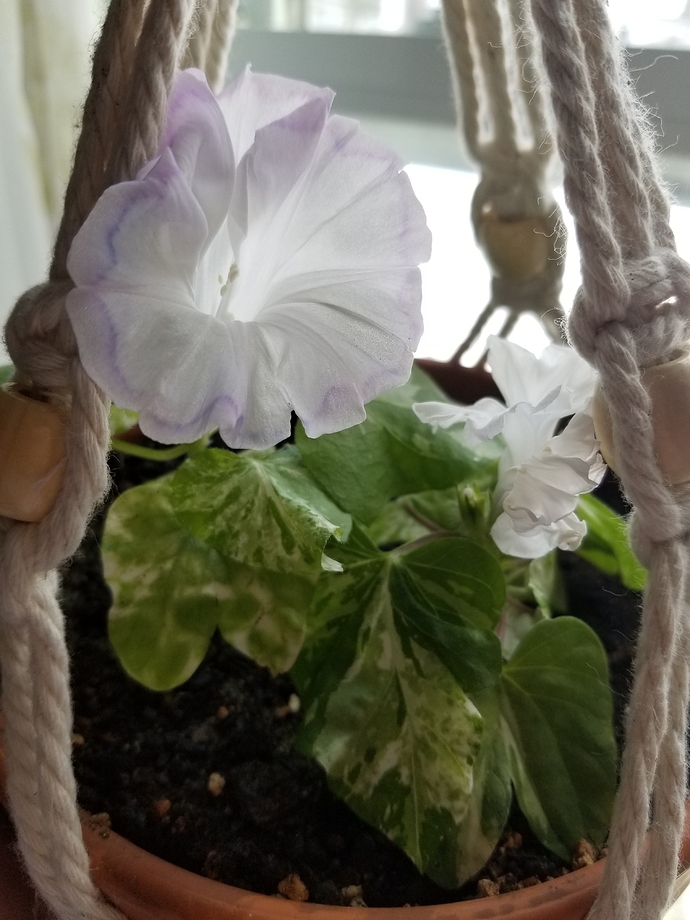 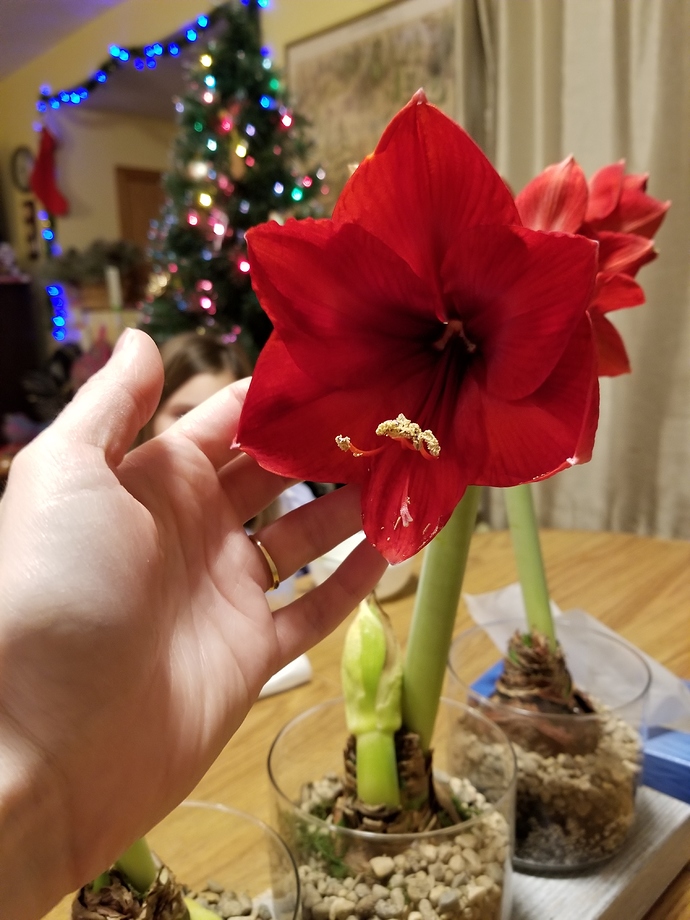 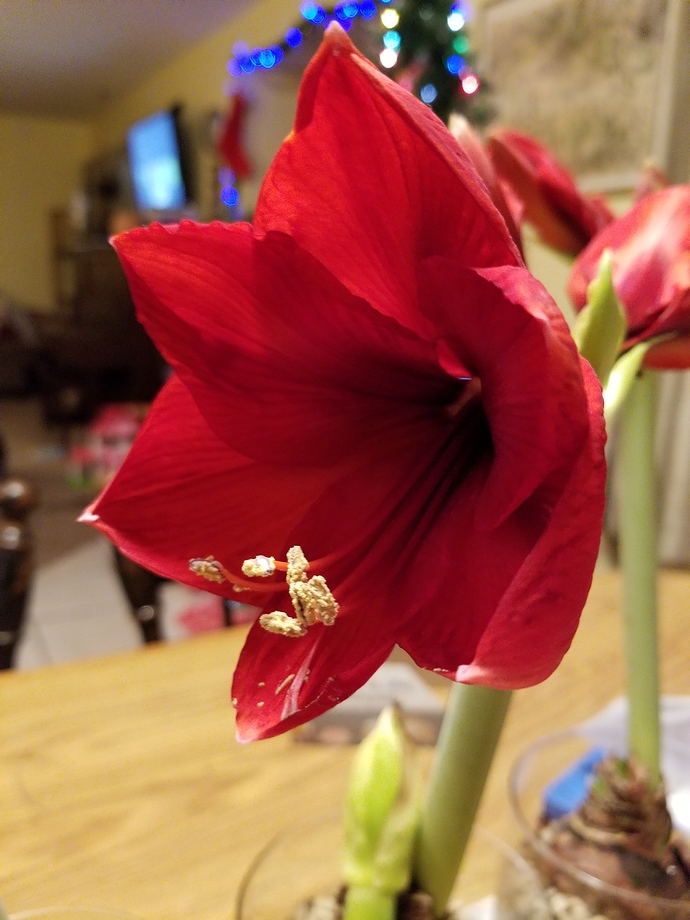 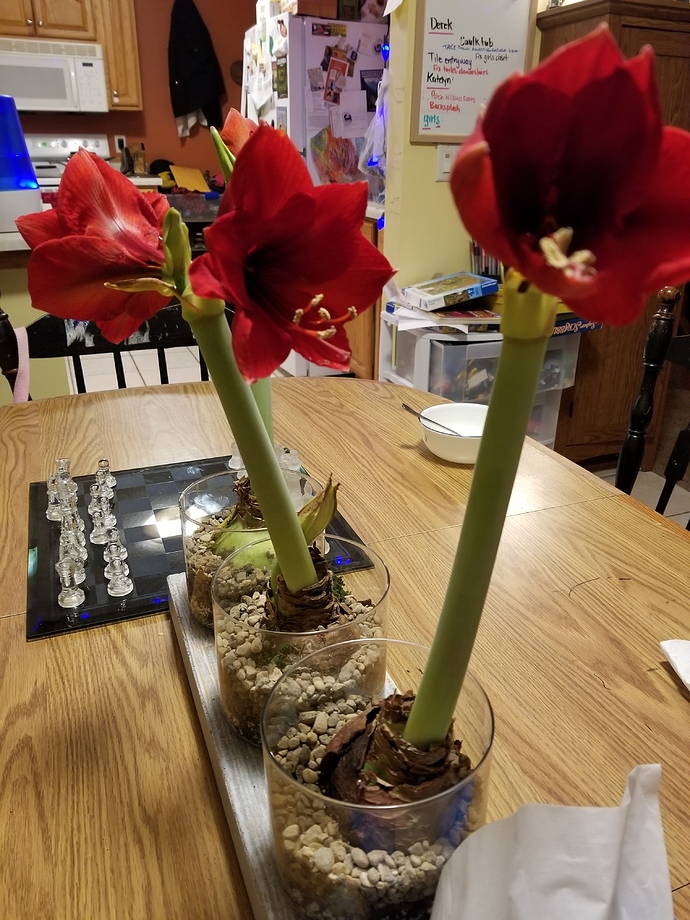 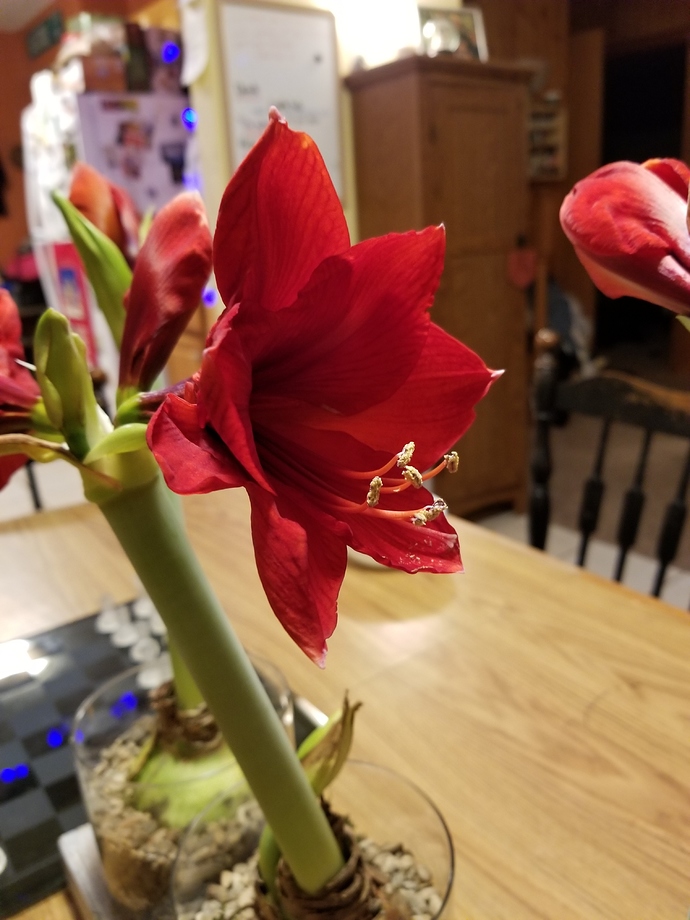 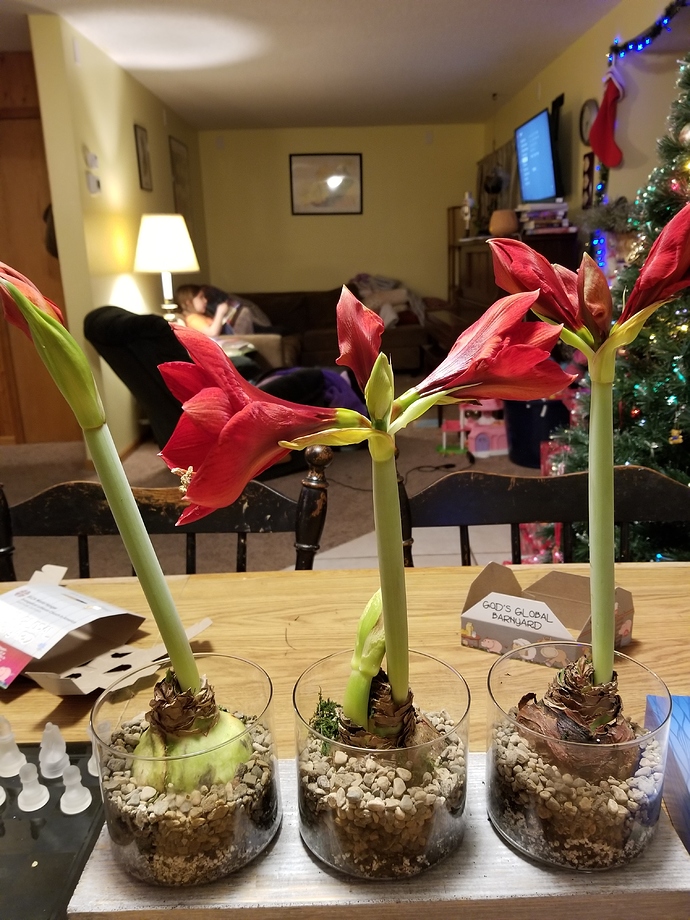 amaryllis53024×4032 3.53 MB
I got the amaryllis at Costco, and the bulbs were glued to the bottom of their containers and packed with moss. When I checked under the moss they bulbs were moldy. I pulled out the moss and yanked the bulbs off of the bottoms, which ripped the roots a bit. The roots were rotting from being too wet, anyhow. I don’t know much of anything about amaryllis- they were an impulse buy. I’d like to keep them growing for future years though, so if anyone has any tips, I’d take them.

Does anyone else have any pictures of indoor blooms you have going on right now?

How long do the blooms last? They look nice

No clue! Most people try to have them blooming for Thanksgiving or christmas, but I just assumed it was my luck that they’d bloom right between both.

I’ll let ya know if they make it all the way to christmas or not.

Very, large and beautiful colored flowers. I record the bloom can last very long time. If potted right, keep it in dry side, it can grow and bloom every year

I picked up some of these on clearance st Lowes one year after Christmas. They were not in very good shape but they bloomed and I saved them for several years. The bulbs will start making little bulbs on the sides you can divide to make new plants. They are really nice to see blooming inside when everything is dormant outside!

Cool, I didn’t even think about how they might create baby bulbs, like bulbs do. I’ll have to get bigger pots.

It is nice to have something blooming. I’ve ordered some citrus and can’t wait to have fruit producing blooms going inside, but until then these will do.

Amaryllis blooms about 1-2 weeks only.

I have them bloomed for the past 3-4 years (same bulbs) but I think I’ve neglect them too much this year. They are not dead but may need to be fed.

Move them gradually out to the sun after danger of frost is passed. Fertilize and then water sparingly over the summer if needed. You can plant them in the ground or leave them in pots. When 45 degrees nights are forecast, move them inside to a cool, dark place and let them dry up. Around Valentine’s Day, bring them out and start watering them again, unless they start sending up a flower stalk before then. You might get blooms or just leaves. It takes them two years to form flower buds. I have had a few for over 25 years. The cool place to let them go dormant is the limitation for many. I have also crossed seed and started some. A fun project. I keep about 40 pots under a bed in an unused basement bedroom over winter. Many people way overwater the bulbs while leafed. Let them dry out between waterings. Once a week is plenty. They did great when I used aquarium water.

Wow, thanks for the wealth of information! I have a cellar in the basement that would probably work for storing them. So you have blooms in the spring, then? I guess I always thought they were winter bloomers, as that seems to be how they’re marketed. So if they prefer to bloom in spring along with a lot of other plants, is it called “forcing” when you try to get them to come out mid winter?

I love the idea about crossing seeds and starting new plants. I’m always thinking about new projects like that. What colors have you gotten? And what does a baby amaryllis look like? I can’t imagine it!

this is what I have in blooming 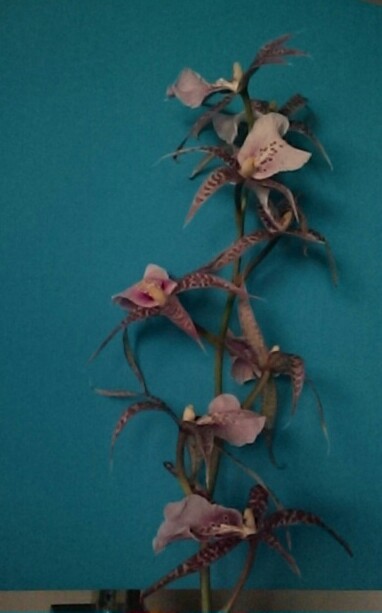 Two of my three Christmas Cactus are blooming. 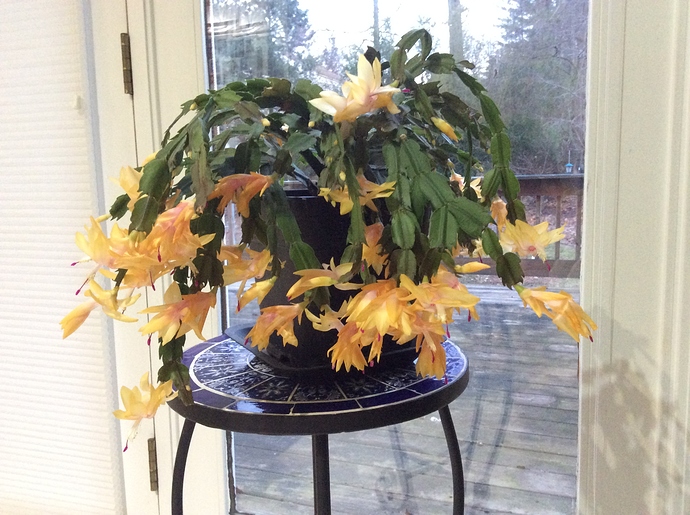 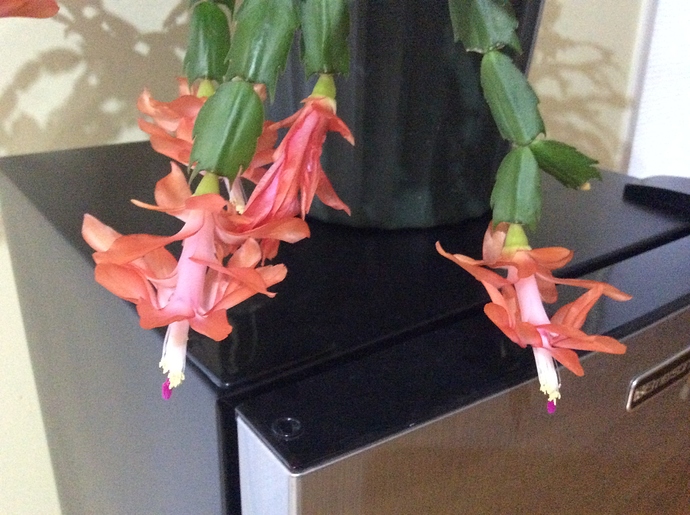 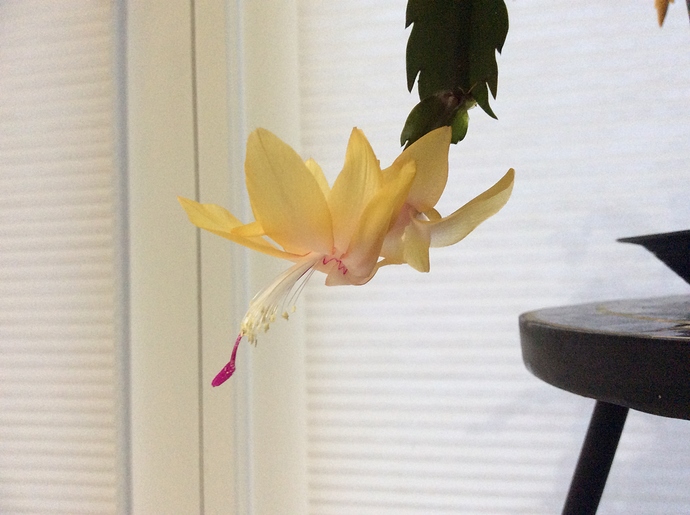 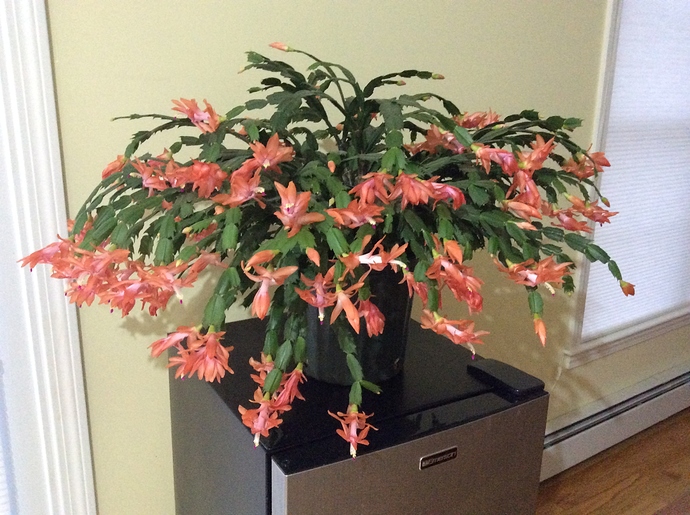 I have never seen a yellow Christmas cactus! How pretty. The flowers look like shooting stars!

So you have blooms in the spring, then?

When you start to water them again in January or February they should soon start to send up a bud stalk. Some do and some don’t. I have on a few occasions had some start to send up a budstalk in December even before I start to water them. Then I bring those up and water them. Lady Jane seems to be an early one. It takes about 4 to 6 weeks for them to bloom at that point. I guess one reason I don’t try to start all of them growing sooner in the winter is that I don’t have much window space, and once they get green leaves they need sunshine. By waiting I don’t have the plants in the way inside for as long. I watch the dormant pots, and when I see a bud poking out of the bulb I start them. Those I know will blossom. The others have to wait until the early ones are about done blooming, since they might only produce leaves for that season. I take some when about to open to shut-ins, who often overwater them and return them to me in May. (They do not transport well while in blossom, I learned the hard way.) Some are in tough shape when they come back to me and take a year or two to recover! So far the hand-crossed seed has produced a couple red blossoms, but I still hope to get something unusual some day. Unfortunately, many of mine have gotten virus, so they aren’t marketable. They still look lovely, though, with just a little mottling on the leaves, which I overlook. I think to have blooms by Christmas, you would have to let them go dormant early in the fall, like by Labor Day. But I figure the longer time growing outside to build up the bulb, the better. I see yours are mostly in stones. I would suggest putting them in potting soil when they are done blooming, or at least before putting them out for the summer. I had mine in full sun this past summer, which seemed a bit intense for them, but they managed okay. Deer don’t seem to like the leaves, but something ate a blossom one year, that I suspect was a deer. The leaves are somewhat poisonous to eat, I have heard. An individual blossom stays open for about 7 or 8 days. Many bulbs will produce two stalks, so you might have blooms for a couple weeks or more that way. I have learned that small pots tip over easily, so I use large ones and stake the stems with green wire supports with a twist top that Menards sell. Those look much nicer than the sticks and cloth strips I used to use. Eventually the bulbs multiply and need dividing. You will end up with TOO MANY of them, but not have the heart to just throw any out. Apple Blossom seems to be the most vigorous variety. I gave a large pot with several stalks of them blossoming at once to a very talkative lady and literally left her speechless for a few moments! It was precious!

Bough it from a local supermarket about 5-6 yrs ago.

And what does a baby amaryllis look like? I can’t imagine it!

Sorry I forgot to answer the rest of your questions. Baby amaryllises look like grass the first year, then daylily leaves the second year. Mine haven’t had a lot of care, so only a few have bloomed so far, just red, but nice. You harvest the seeds and float them in water until they have 1/2 inch or so sprouts. Then plant them and wait. 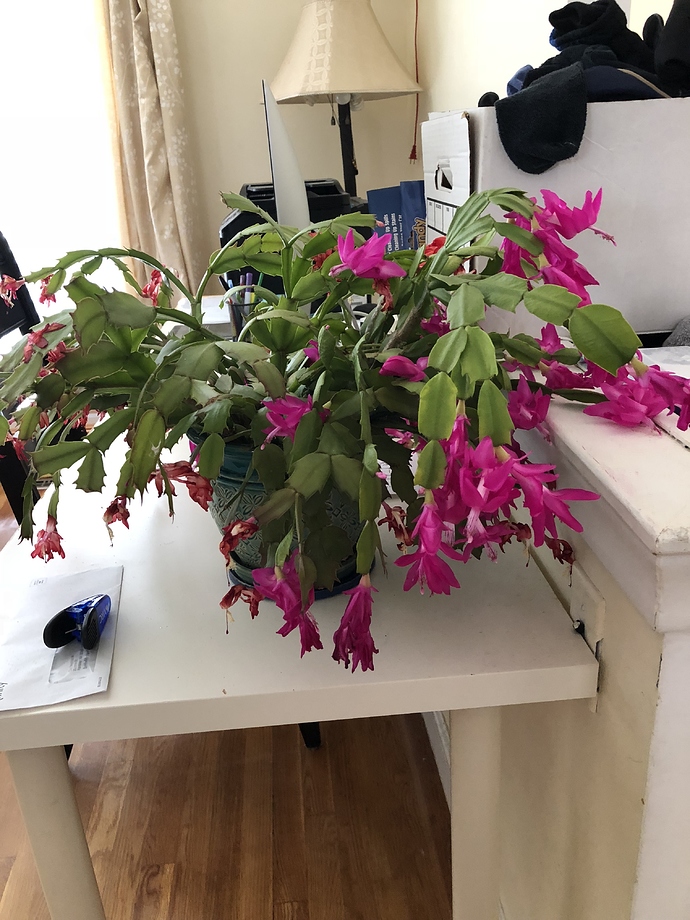 Lovely christmas cactus! I dont know if its gray and dreary where you are, but it is here and those colors are so nice to see. I love the salmon pink color especially.