So I heard that over time you could lower your Japanese beetle numbers by killing either adults or grubs.

Here are my experiences:

When we moved into our new house, we had horrible Japanese beetle problems. My kids and I started using the soapy-water-in-the-bucket method and killed thousands of them.

2nd year was a little better, and we kept it up. (i paid my kids to round them up and throw them in the bucket)

3rd year we had a really late freeze and only like 1/10th as many beetles.
4th year was low beetles numbers as well. Maybe just a few more than 3rd year.

This year threw that all out. We have as many as we did the first year. We have once again killed thousands and they are defoliating one of my plums and almost no plant in the yard is untouched by them.

So what gives? If I’d reduced the number in the soil, this shouldn’t have happened, right? So is it all a myth? Do they come in waves year by year no matter what you do?

(sidenote: my brother and sister live within an hour of me and this year they don’t have beetles very bad, so it all seems very regional)

@Richard this is the 3rd time I have seen you recommend Gnatrol for control of Japanese beetles.
Gnatrol is Bacillus thuringiensis v. israelensis (BTI)
Which is effective on some Diptera sp. notably , fungus gnats , mosquitoes, black flies.
I can find NOTHING about it being effective on Japanese Beetles ?
There is a strain of Bt that is effective on Japanese beetles.,
Bacillus thuringiensis v galleriae ,strain SDS-502 sold under the name. “ Beetle Gone! “
Please enlighten me if I’m missing something?

I had a huge population of JB about 4 years ago Shortly after that I noticed lots of people in subdivision complaining about moles. At first I battled the moles then realized that the JB were barely noticeable. So if you can deal with the damage to the lawn I think they really have an impact on populations.

I have alot of property…and can go to areas that i personally dont use and find Japanese beetles. So whatever i control in my personal space is moot compared to what they are doing outside of my sight. Not to mention even if i get mine under control…then the neighbors dont…then again moot point i think.

I think each female lays around 50 eggs… so im not sure you can control anything that you are the only predator. 1000 females get u 50000 beetles next year… Then the math gets out of control after that.

Hand-extermination method on any one property will not affect over-time population of such strong flying insects.

We hand collect them. Hundreds and hundreds of them.
My husband wants to try spraying them with Dawn&Water. Either way - we have to march around the orchard with a parade of chickens in tow . . . looking for the beetles. The ones we drop go to the chickens. They love them!

The JBs do a lot of leaf damage - but it seems cosmetic, really. Does anyone have experience with them actually killing a plant ? They do seem to be less in number than in previous years. And each night that we go out to find them - there seem to be fewer and fewer to find. ???

@Richard , do you have any info on the efficacy of Gnatrol for Japanese beetle control, I cannot find any info about this.
I would like to try this if it works but just not seeing any information that it’s effective. Please provide info ,thanks

I’ve had pretty bad damage in years past. I used a trap this year and put it like 30 feet away from any plants. It definitely attracts a lot of beetles into the trap. I’ve only seen a few beetle attacks in my garden. I’ve heard mixed things about the traps, but I guess that’s why you keep it 30 feet away cause it could attract more beetles into the area.

I also heard there is some parasite attack the beetles and makes them have white spots. I’ve seen a lot of my beetles looking like this, so it could just be plain luck that this year has been better

Two years ago I had japanese beetles like crazy. Out of nowhere I suddenly had what seemed like a hundred Scolia Dubia wasps doing mating rituals. Apparently they burrow into the ground and lay their eggs in the beetle larva. Following year I had almost no Japenese beetles at all. Not sure how you can attract them but they will help to control the population.

The adults eat…make love…the lady gets pregnant and lays around 50 eggs underground…the larvae eat roots…then emerge as adults and do the same thing. Even if you kill them all… your neighbor probably wont. Or his neighbor. Then the cycle will repeat.

Humans are not a good enough predator for the Japanese Beetle life cycle… nor are our poisons.

The gregarine manages the Japanese beetle in Japan and is its parasite… but here in the US it does not.

Japanese Beetles are here to stay… you may as well call them American Beetles.

I don’t think they normally kill a plant, but can hamper it’s growth. One of my plums far out grows the other because beetles only eat about 20% of it. The other they can eat 90% of the leaves in a bad year. The plum they like to eat is a little over half the size of the plum they don’t like and they were planted at the same time.

I’ve considered giving JB traps to all my neighbors to see if I could have a beetle-free zone in the middle.

They do love the plums. On mine they (mostly) chew up the runaway new growth at the top. It has to come off, anyway . . . so I wait till they are done - and then cut out all that super tall foliar growth.

@Richard , do you have any info on the efficacy of Gnatrol for Japanese beetle control, I cannot find any info about this.
I would like to try this if it works but just not seeing any information that it’s effective. Please provide info ,thanks

I am not sure if the traps are diverting them from the tree or attracting them from the whole neighborhood. There are more of them since I put a trap. They are attacking my new Black Tartarian cherry tree and new rogosa rosa shrubs. 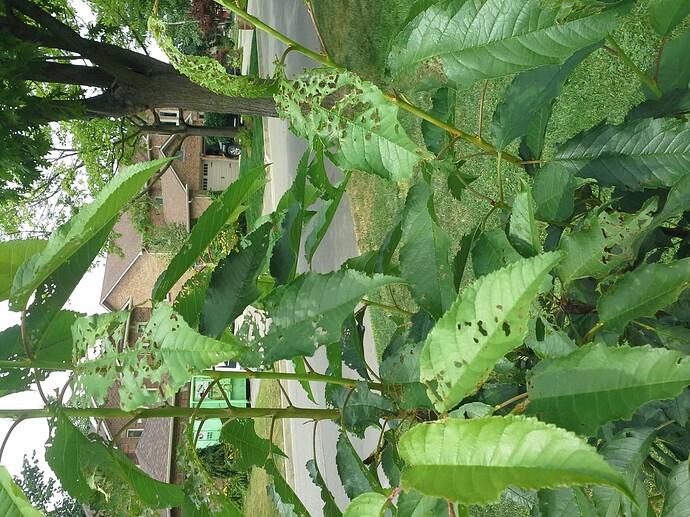 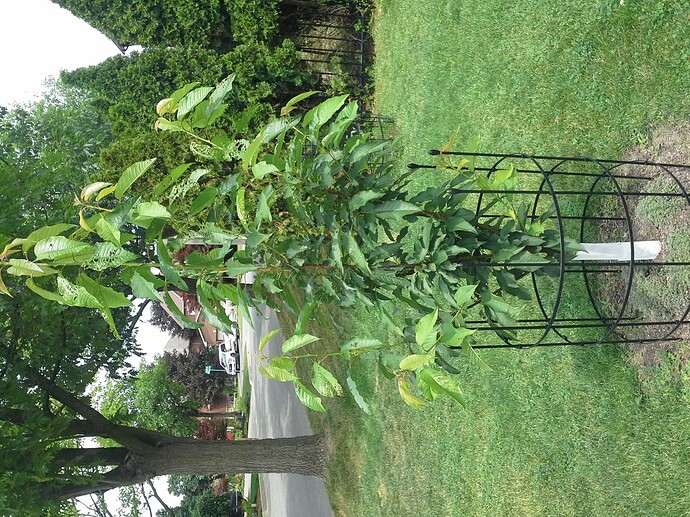 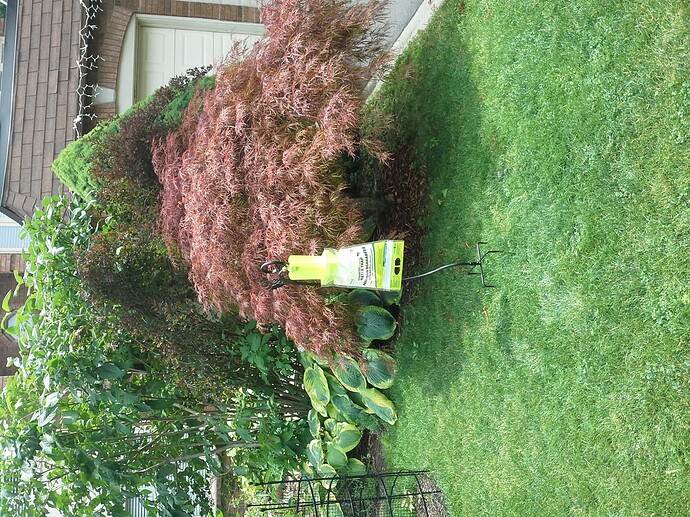 Here at Bear Paw Vineyards, I have a 3 pronged approach. First, I treat the soil in and around the vineyard and orchard with milky spore. This will take some time to establish the bacteria culture in the soil. This kills the grubs for JBs and june bugs. Second, I place traps out and away from the crop to protect. No reason to draw them in. Third, I will spray Garden Tech Sevin (not carbaryl based) when I notice emergence. I must say that I have not used Sevin for the last 2 years due to the other efforts being effective. I have picked a few off, but their number was only 100 or so. In the early days, they came in waves. The picture shows a partial days collection. 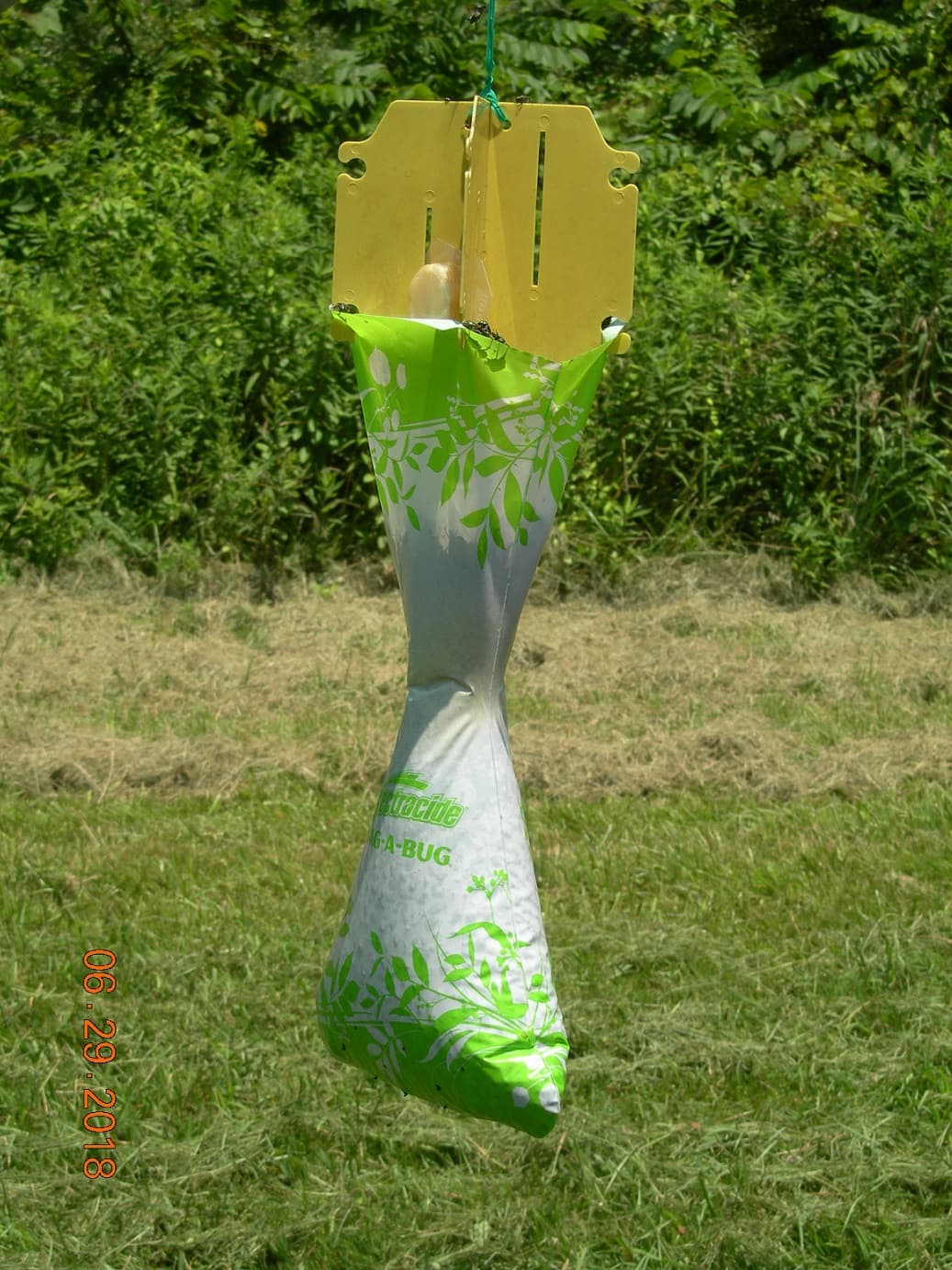 Don’t use Japanese beetle traps. Hanging a trap in a home garden is not an effective way to protect plants. And they may attract more insects to your yard.

The traps attract beetles using synthetic female sex pheromone and a blend of chemicals with a strong floral odor. They were developed by researchers to monitor for the presence of Japanese beetles so that management strategies could be implemented.

While these traps can collect an impressive number of beetles, research at the University of Kentucky has demonstrated that more beetles fly toward the traps than are caught. This usually results in more damage to nearby gardens and landscape plants than would have happened if no traps were present."

When the beetle population is not extreme the traps have worked very well for me at reducing plant damage.