This has happened to me for two years but other times I have not been able to track it or be positive it didn’t happen during bloom.

This is my red love odysso Apple which has not flowered yet and is young. This had no signs of disease before the Japanese beetles showed up 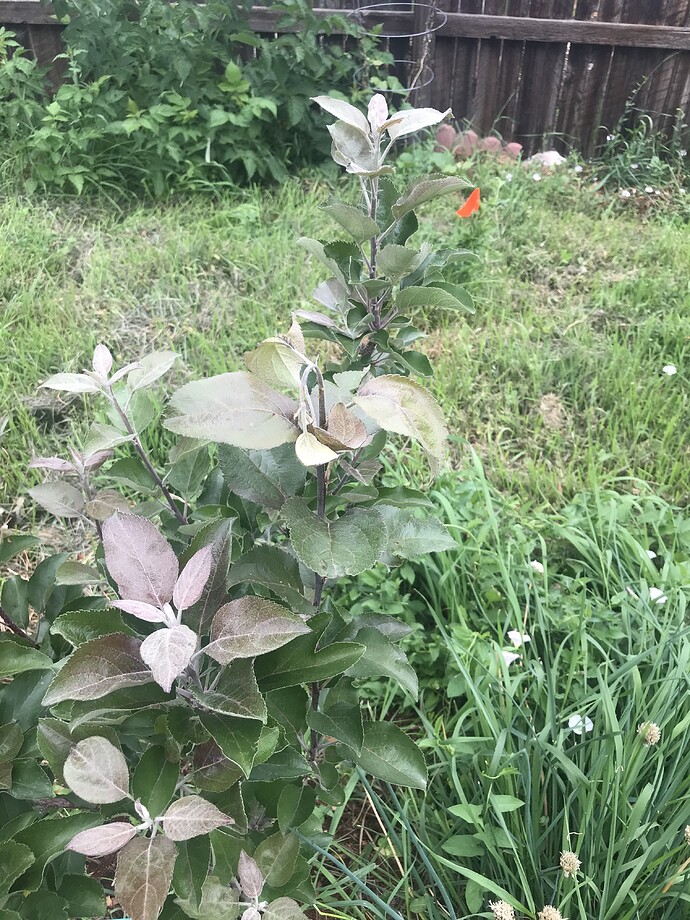 That’s a bummer. Sorry. Have you had any hail this year? But yeah I guess beetles could do it too. Were there other trees nearby that were actively oozing during the beetle time?

Nope i have dodged and weaved the hail and i had some strikes after bloom but none active. I think they chewed on a tree that got hit then went and hit this tree there was a few nibble marks on one of the top leaves and i got a picture of the trunk oozing but i could see no damage causing that other than cellular death.

I have made these claims on here without anyone else noticing it happen to them and last year i had zero strikes spring and beetle season.

The first year JBs hit i was working and gone and it was at the same time my quinces first bloomed and instantly got what appeared to be quince rust and that and fb worked against them and after the jbs i saw what appeared to be quince rust on my apple trees and trimmed it all out and sadly removed the amazing smell quinces who are not made for my climate and natural methods.

I have seen increased disease pressure after the Japanese beetles arrive as well. Young beautiful grafts turned to very unsightly things in a week or so of beetle activity. Very frustrating.

But, there is hope: THE FLY THAT ATTACKS JAPANESE.pdf (1.0 MB)

We have bought several of those Spectracide Japanese Beetle traps. Following some advice, we placed a 5 gal drywall type bucket under them with 2 gallons of water, some dish soap, and a beetle killing insecticide at low concentration. Seems beetles are lousy flyers and when they bounce off the trap they fall into the water in the bucket. Well this system has worked beyond well, usually several trees take big hits, this year, only one has been hit (location is further away from the traps). I estimate I have disposed of many many pounds of beetles and my apple tree leaves show almost no damage as I mentioned.

Do beetles spread fireblight?? Hard one - I would check with the entomologist and disease guy at the apple experimentation station in your state. I have not found they do in years past, but the truth be known, I have been concentrating on buying fireblight resistant root stock and cultivars. Fireblight is just too much of a menace to deal with (it can destroy an orchard) and that is why I use Harbour heavy (once the trees blossom until 2 weeks after petal fall) and Cuprofix with my dormant oil sprays early on. Regardless, cut down 8 inches from the damage and burn the cutting. Sterilize the cutters with 90% alcohol and do not touch anything until you have washed up. If it kills your tree, my ruthless answer is that tells you that cultivar is a bad bet IMHO.

We have bought several of those Spectracide Japanese Beetle traps. Following some advice, we placed a 5 gal drywall type bucket under them with 2 gallons of water, some dish soap, and a beetle killing insecticide at low concentration. Seems beetles are lousy flyers and when they bounce off the trap they fall into the water in the bucket.

Making a mental note of this one. Those small bags fill up so quickly I have had to empty them daily on some years.

Thanks for the tip!

RRT - Are you sure it is fireblight? I know the later stages are darker, but not sure about the earlier stages… I have an issue on an apple tree, myself, and have been trying to prune it out since the massive hail storm we had in 2018.

If you think it is induced by the beetle, what about trying a mesh bag over the small tree, with a drawstring around the trunk? Perhaps when the tree is larger, it can better fight off small infections. I assume you’re pruning back the fireblight until you see clean cambium.