Here is a bowl of fruit from my Li tree. There is a lot of variations in size. They are all sweet, juicy, and crunchy 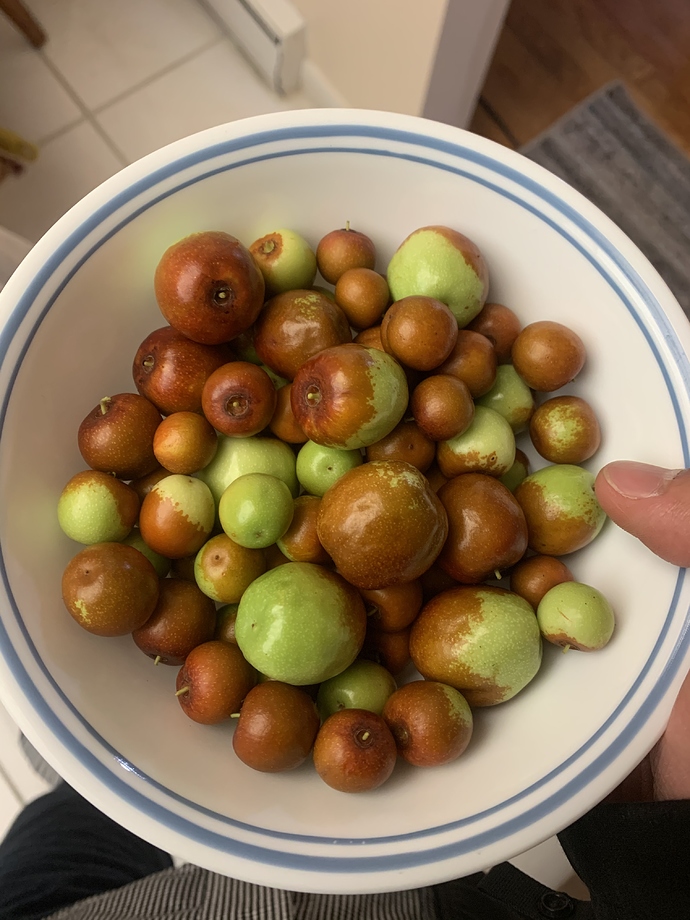 H Mart is where my wife got them as well. I didn’t even realize that it was a chain.

Here is a bowl of fruit from my Li tree. There is a lot of variations in size.

That looks a lot like fruit from my So. Not just the fruit, but the size variation as well.

We have H Mart here, too. A Korean chain supermarket.

My second crop Li had started ripening today. Much sweeter and moister than my summertime Li. I have ONE second crop SiHong left on the tree…

I would love to give it a try to grow Vegas baby here where I live!

i only recommend it if there might be anyone who can’t get more popular juju cultivars to produce in one’s location.

Looking froward to seeing those babies

We had some bad weather for few days so I didn’t take photos. Besides that now is the period of year with lots of work, it’s harvest time. Here are photos. Hope that names on tags are visible ebough. 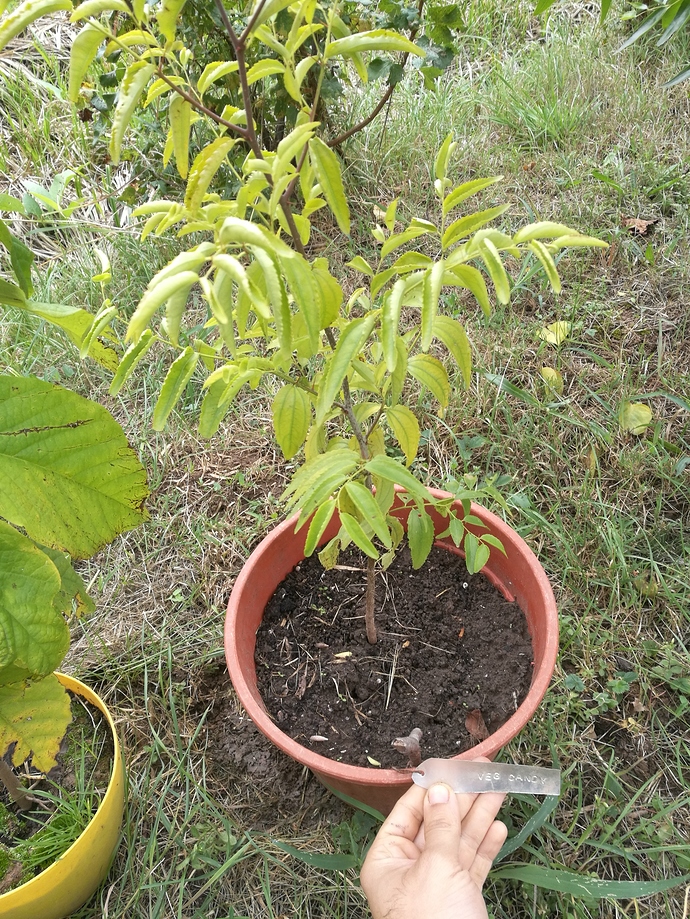 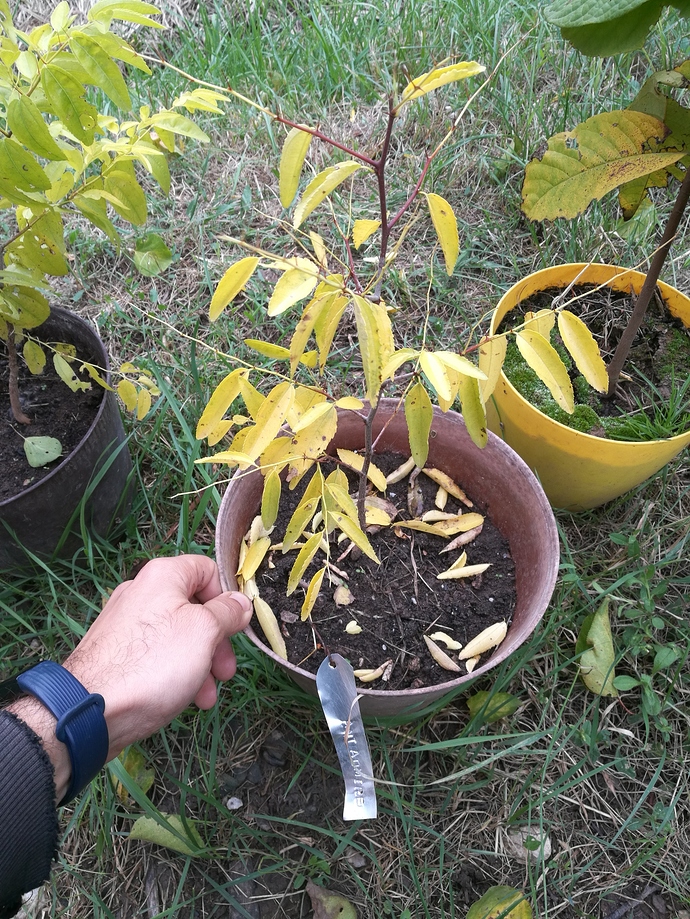 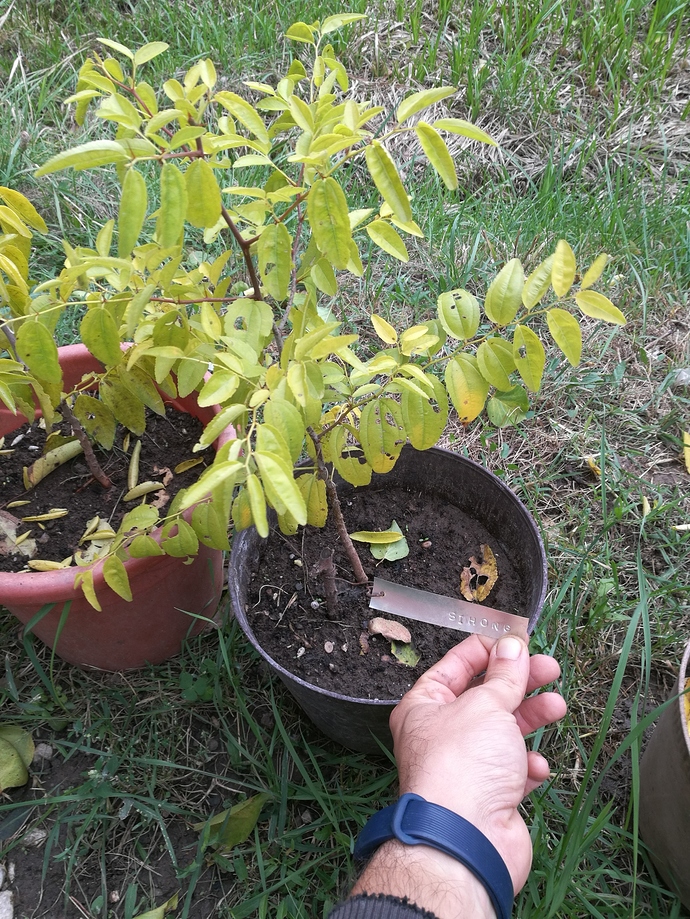 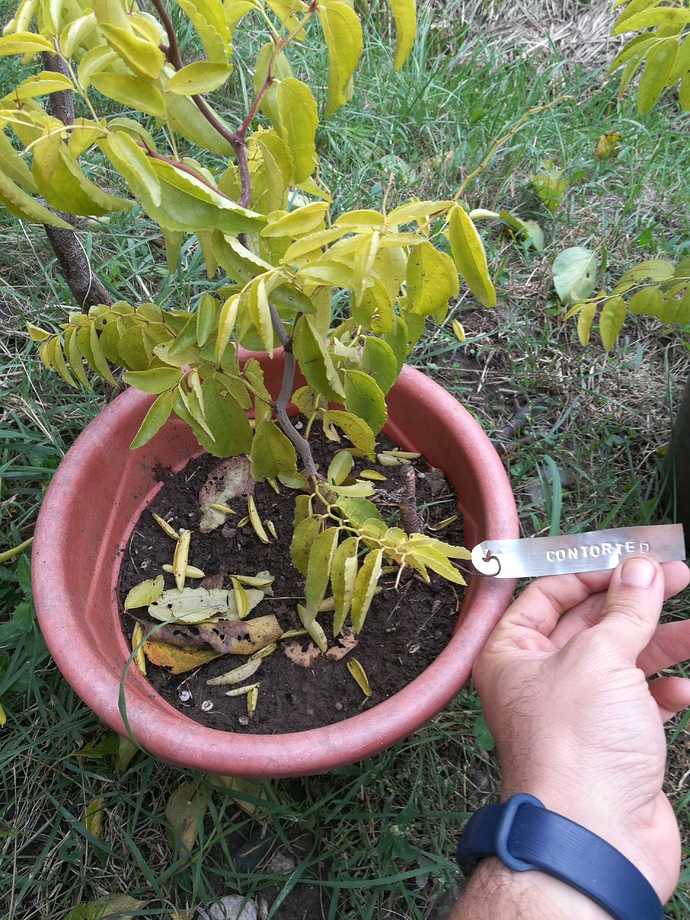 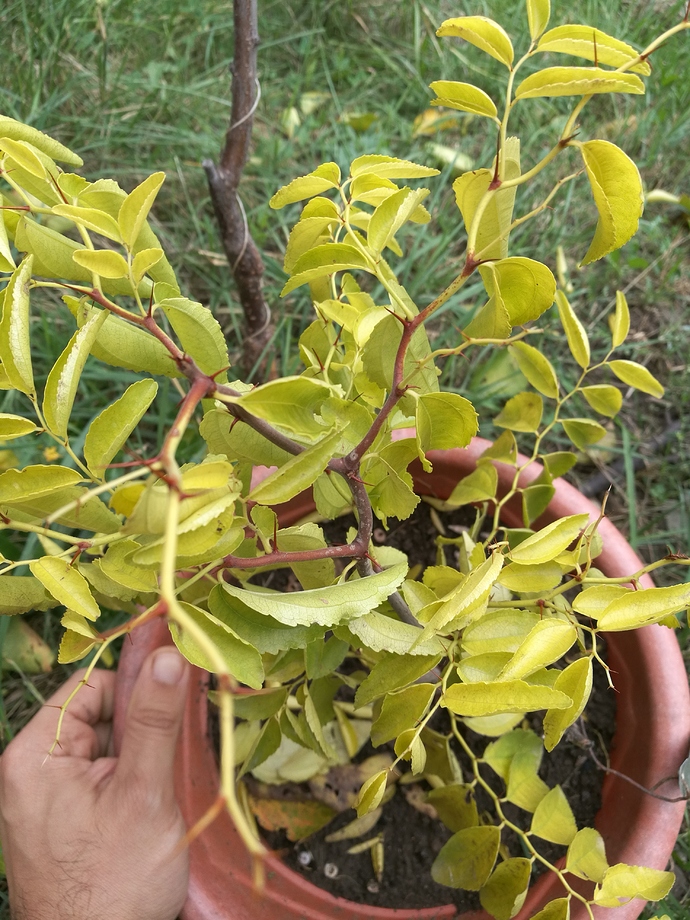 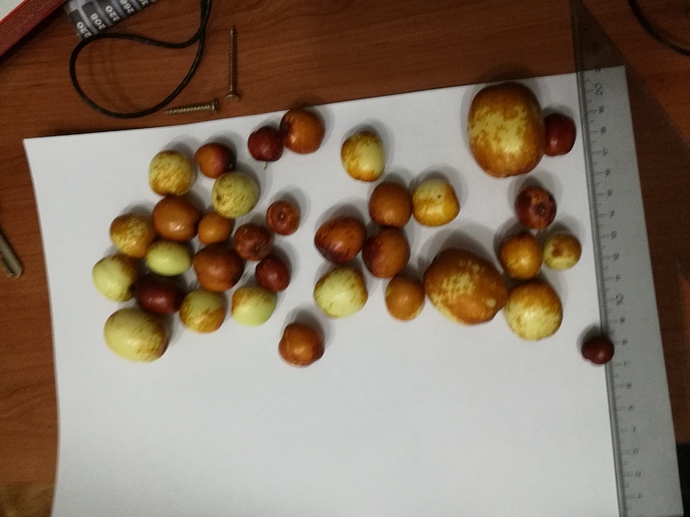 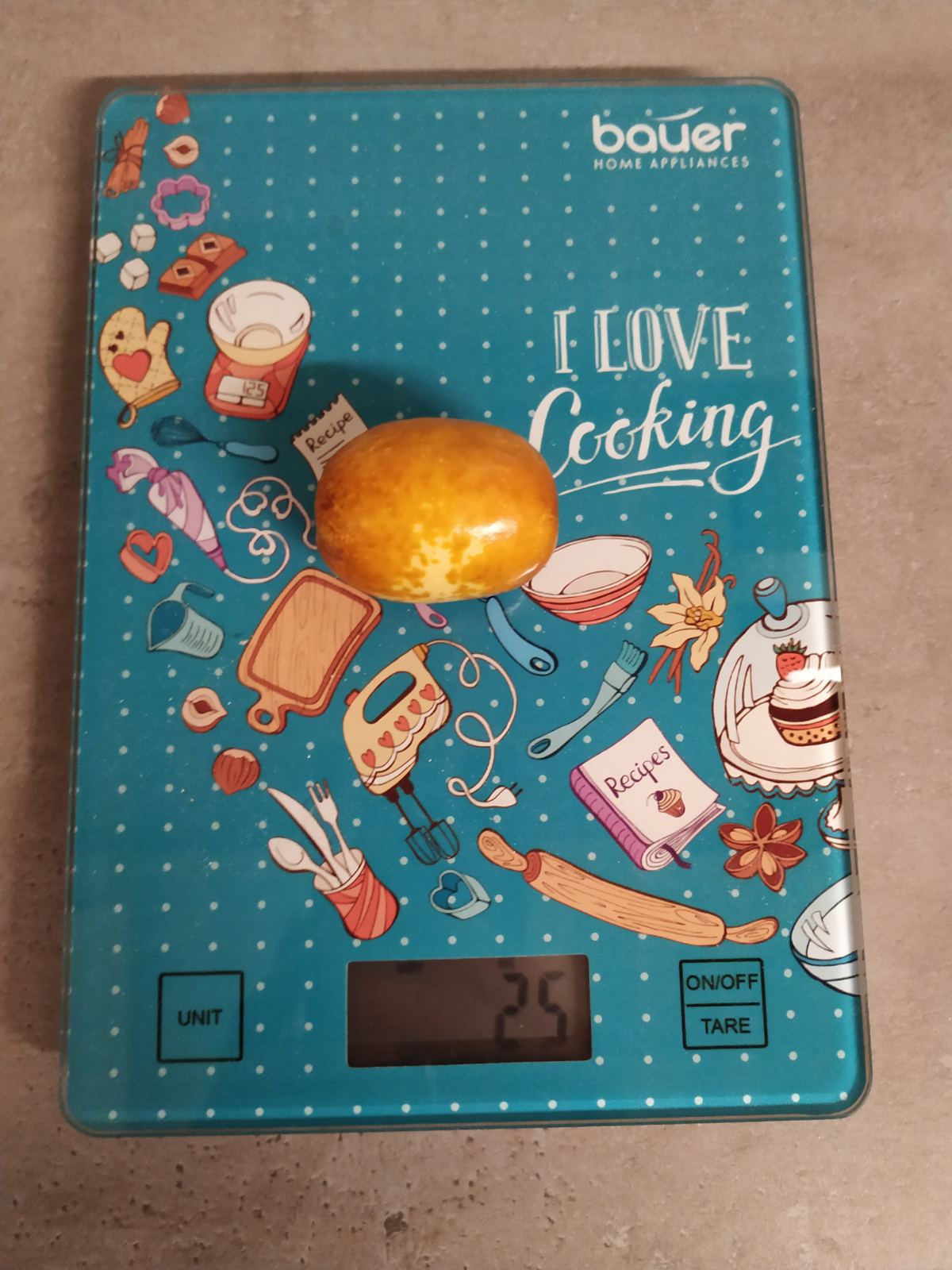 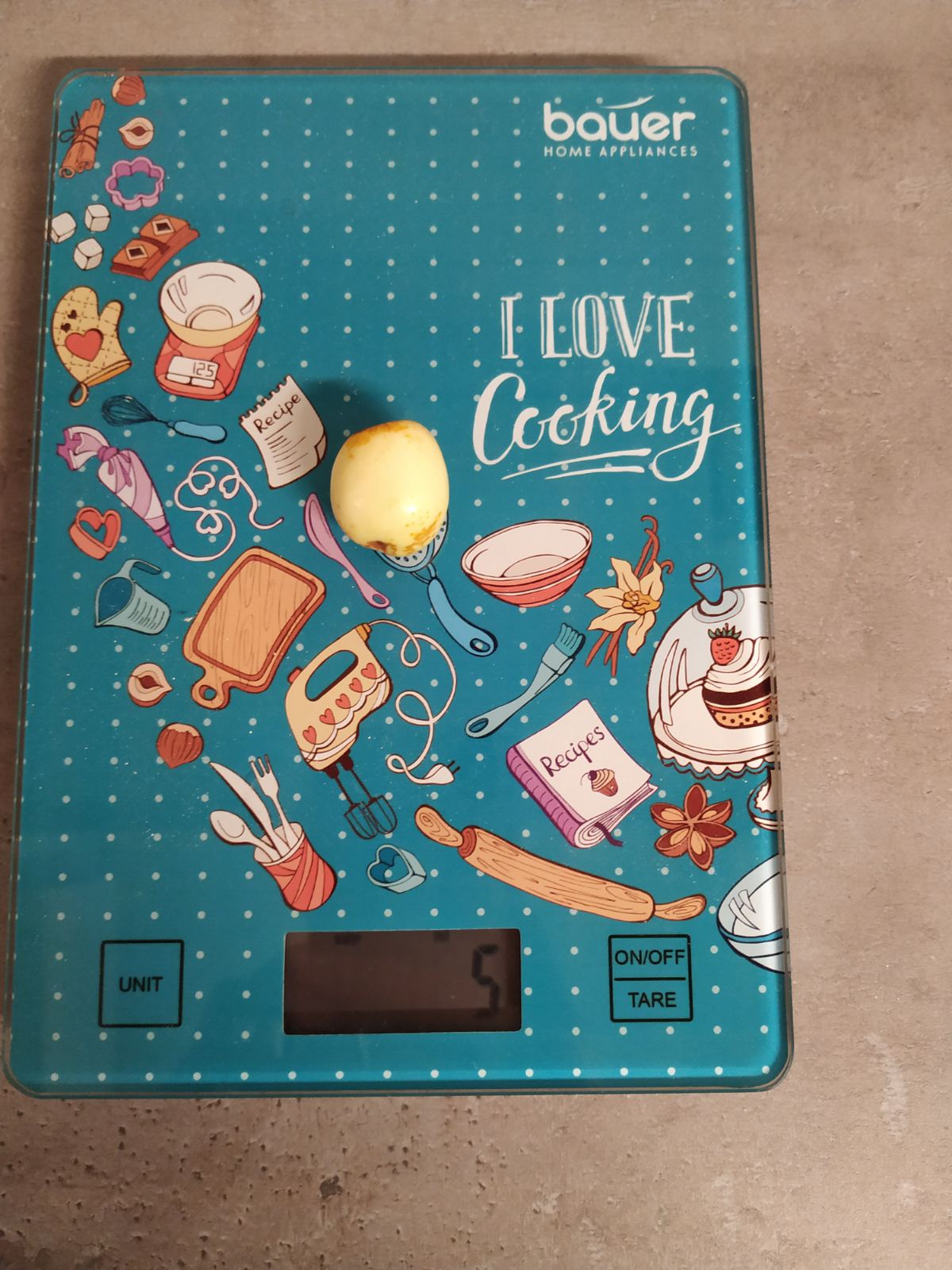 thanks for sharing @lilke ! Those grew pretty quick btw, i feel like it was just recently when sent you those. I have 3 or 4 yr old juju seedlings that are smaller than what you have(albeit more precocious)

The ones on the left are Honey Jar NOT (possibly Sugar Cane). The 2 on the right were sold to me as Shanxi Li from JF&E. I expected the Shanxi Li to be a rounder fruit. Maybe that tree is mislabeled too… Both were sweet, moderately juicy, and somewhat crunchy. I preferred my Li over them even though it’s a smaller fruit because the texture was more crisp. 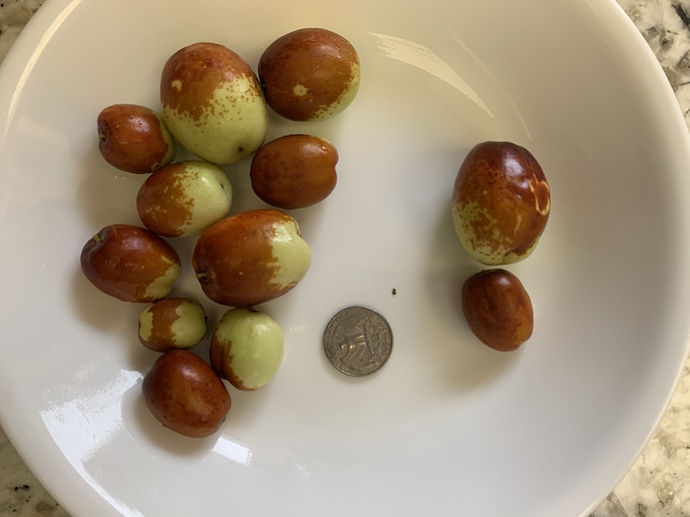 @PharmerDrewee,
Here are my Honey Jar (with flat bottom) and Shanxi Li (several I have are larger than these). 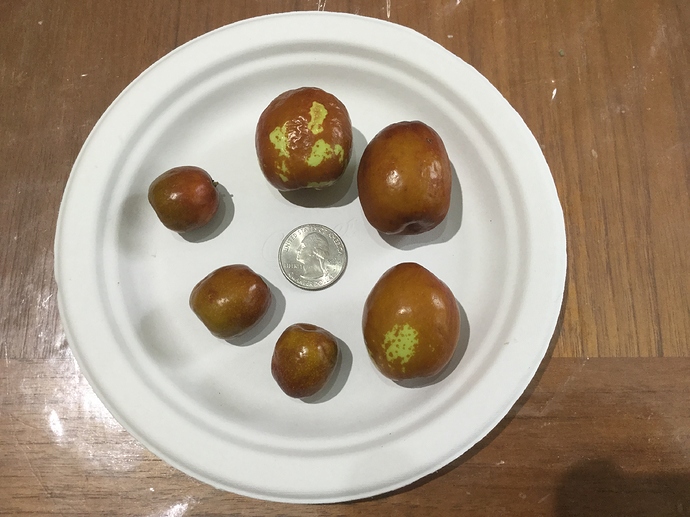 Your HJ looks like Sugar Cane. Not sure what your Shanxi Li is real or not.

I also want to apologize to Ms. Massandra for bad mouth about her early on.

This year, Massandra is larger and sweeter. It has officially moved to the “worth growing” side. This pic showed Massandra with a Honey Jar in the middle for a size comparoson. 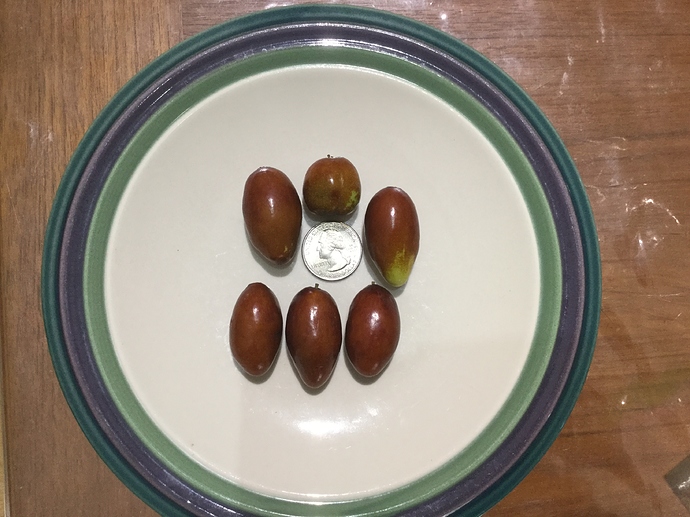 want to apologize to Ms. Massandra for bad mouth about her early on.

you’re not alone, i bad-mouthed several cultivars too when i first got introduced to them (including grocery store bought li–the first juju variety i got to try), but after several years found myself addicted to many of them

Per its tag, this one is “Dong Zao”. About the size of a medium Sugar Cane with a bit longer shape. Only two fruit this year. 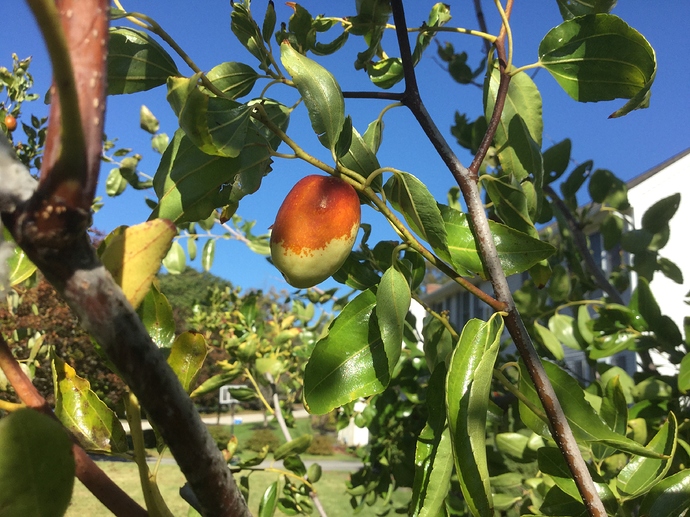 This year, Massandra is larger and sweeter. It has officially moved to the “worth growing” side.

I’m glad it did better for you this year. I only had one before this year (which was good). The ones I got from my 2nd tree this year were also good. But I noticed that the original tree’s fruit was only pea sized. Looks like I had the scion die on it and the rootstock take over. I’m not that bothered by it- just more spots I can graft over next spring, though Massandra is on my list of varieties to graft more of.

It looks like the two I cut back after staking them have started to set quite a few. But, it is almost certainly too late in the season for them to ripen.

Well, they did ripen (as some people predicted). At least a few weeks later than most Honey Jar, but I’m happy to have the fruit.

A full quart, weighing about 1.2 pounds. 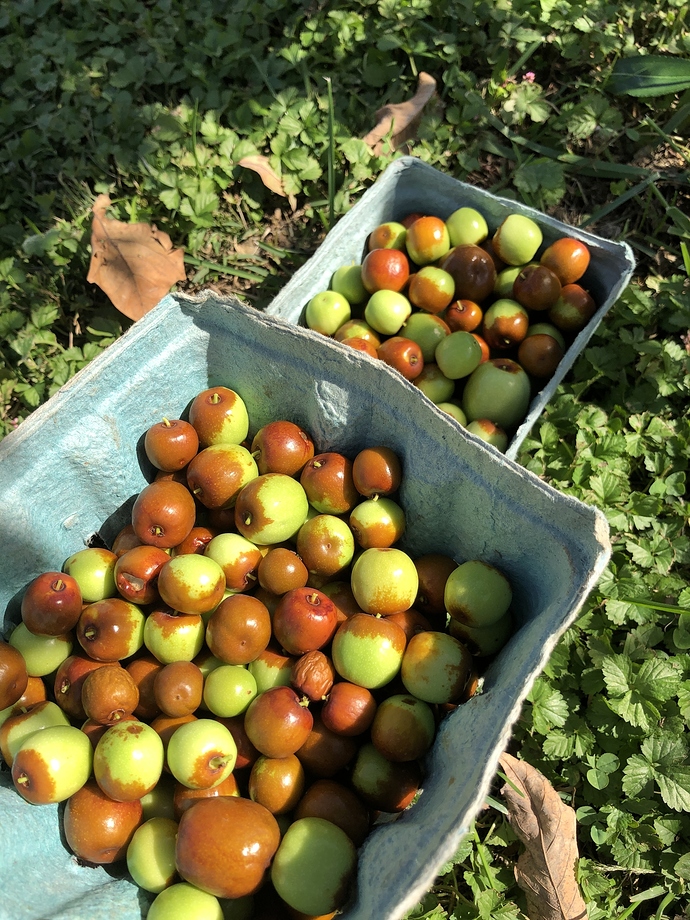 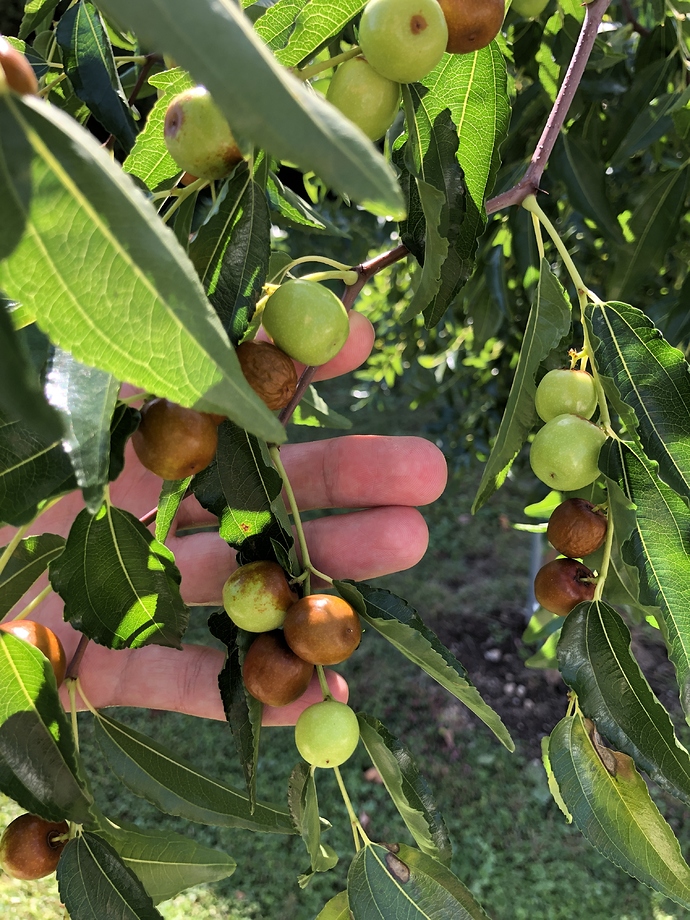 Much of the fruit was quite small, but getting this much fruit from a 2nd year tree is a big victory in my book.

The So is sizing up better, but only a few were ripe. Most of the Li had at least some coloring, but didn’t impress me. They were OK, but not even to the level of Autumn Beauty, So, or Xu Zhou. 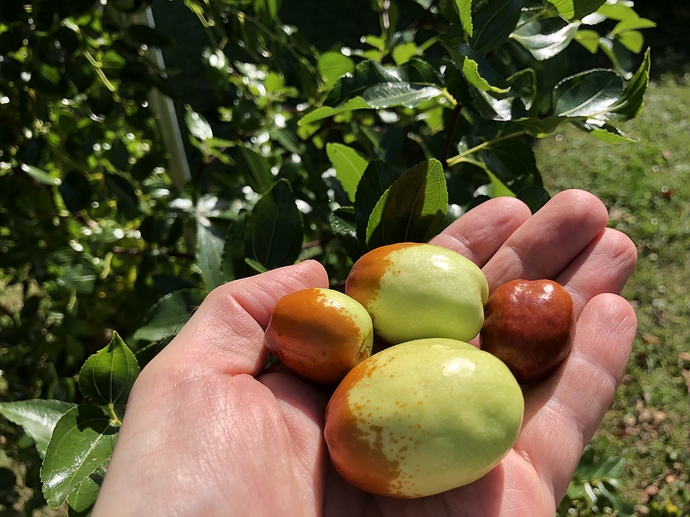 I also got a very large Redland from a tree I planted this spring from Chinese Red Date. Here it is with Li and Honey Jar (one of the larger ones) for size comparison. The Redland was better than the Li, but not in the same class as the Honey Jar. My wife: “it is good for one so big”. 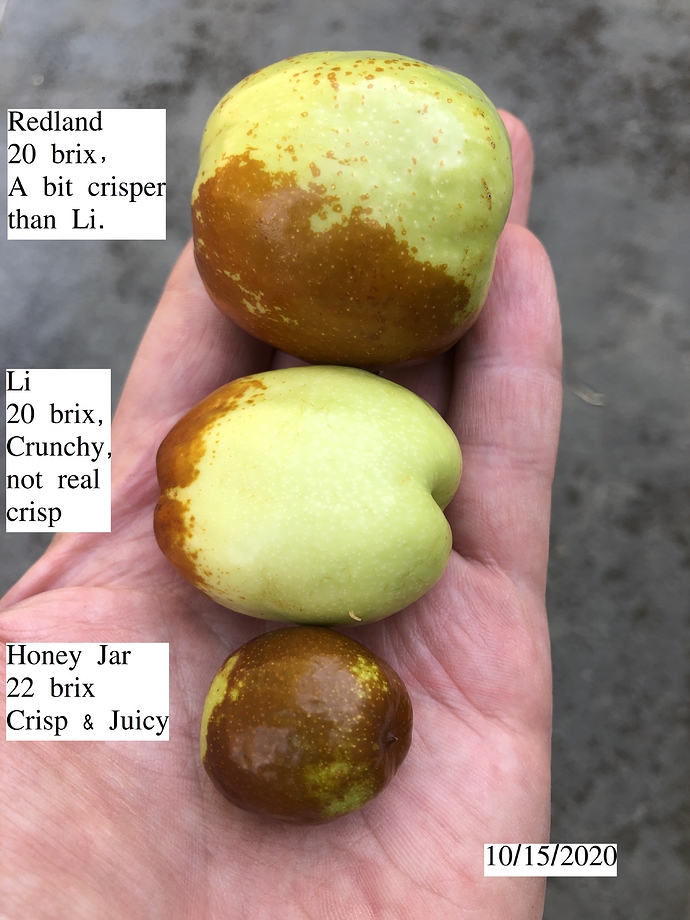 Do the 2 smallest jujubes on the right look like Honey Jar? That’s from my JF&E tree. The 5 on top are from my mis-IDed tree that members on here suggest is Sugar Cane. The bottom 4 are from a tree I got from JF&E as Shanxi Li. I’m doubting this though because they are so oblong. Honey Jar was the sweetest and most flavorful. All the large jujubes were comparable. 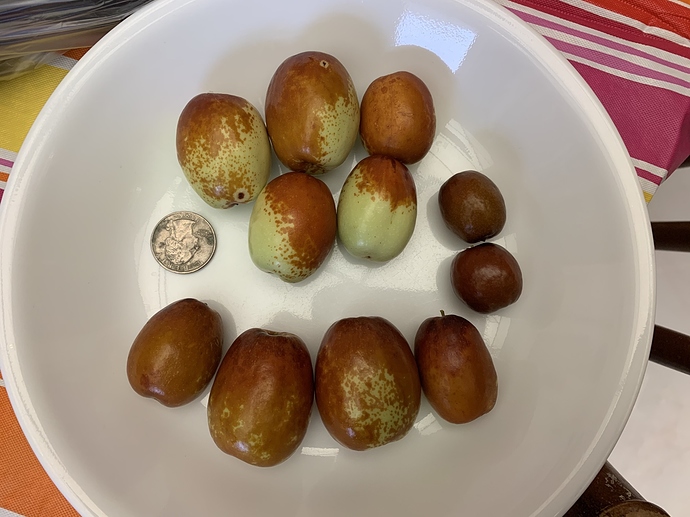 The top ones may not be Sugar Cane if they don’t taste really good. You are not too far from me, our jujubes should taste similar. Both @BobVance and I are happy with our Sugar Cane, sweet, juicy, crunchy.

The lower ones look like Shanxi Li. My Shanxi are mixed bag. Some had some crunch, several were spongy. None would be called sweet.

The unknown ones aren’t bad but they aren’t as good as the ones from JF&E Honey Jar and Li. They were somewhat crunchy but not what I’d call spongy.

Sugar Cane is almost round medium to small size (around 5g) fruit. I am wondering why is it called this cause it’s not very sweet compared to the others. But it’s not so bad after all.

Harbin,
I truly believe fruit quality is affected by the climate including soil they grow in.

It is difficult to say one same fruit is excellent all over the diffrent regions of a country or the world.

We do not have to look far. @tonyOmahaz5 in Nebraska said his SC does not taste that good and has a bitter after taste.

In MA, I’ve found that my SC is very good, sweet, juicy and crunchy. HJ may be a tad sweeter but it is a lot smaller. That is quite a disadvantage.

Also taste is subjective. What pleases me, may not please the next guy or gal.

Halina is on the left, Sugarcane is in the middle, and HJ is on the right. 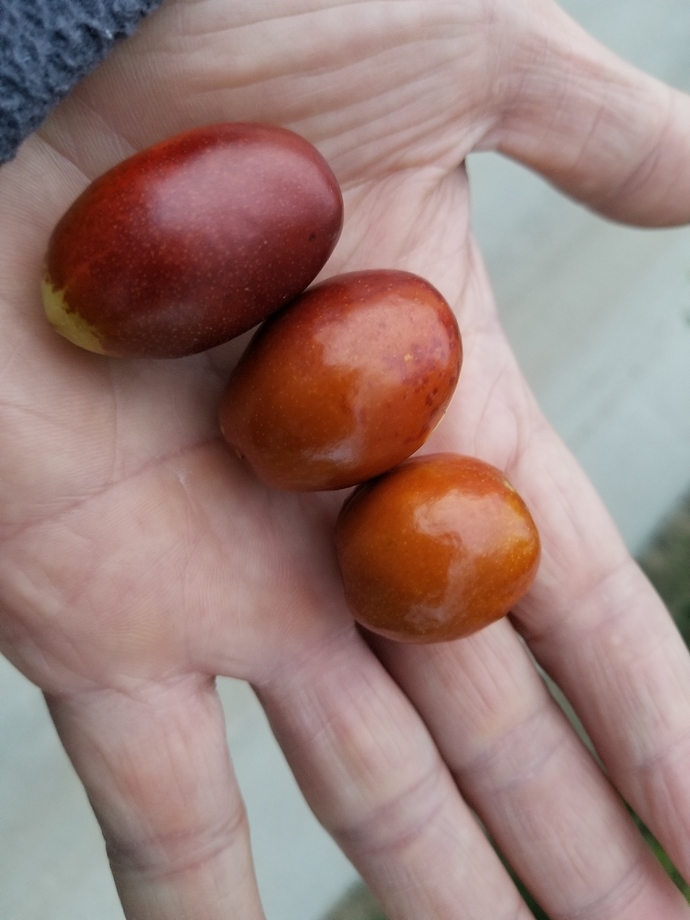 Wow, Halina is super crunchy and crispier than Honey Jar and Sugarcane. Sweetness is similar with all three. Halina is definitely a keeper. 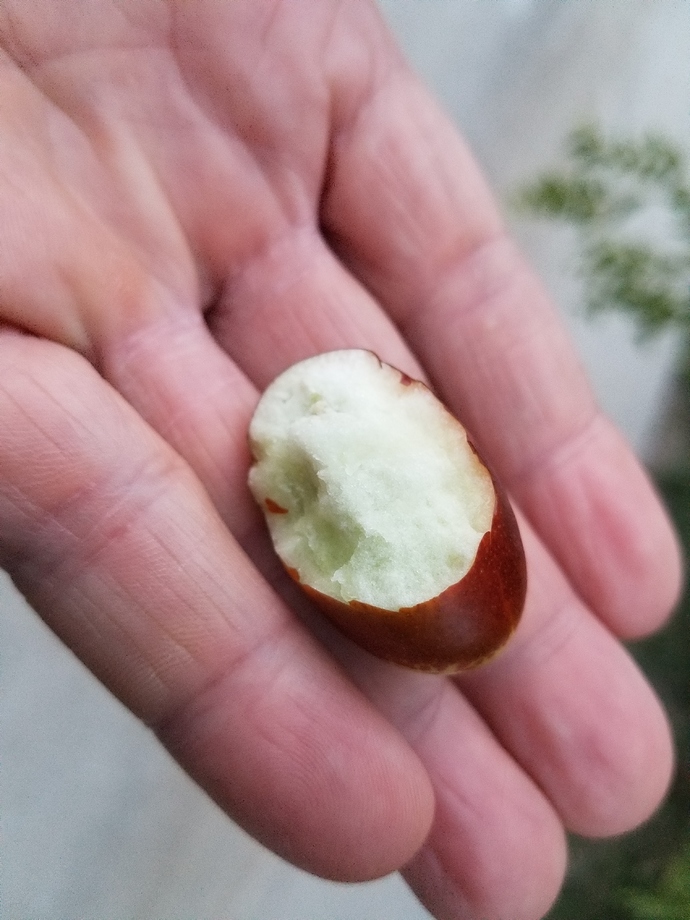