I don’t think so! Pretty ridiculous, I know. I always reached for the other options as I figured Li was only a matter of time. I’m a good 12 years into this ‘hobby’.

Thats atrocious.
Deprived, if not depraved…
Hoping can right that wrong with a few
stragglers

I picked a few more Vegas Baby. It tasted better than the last time. 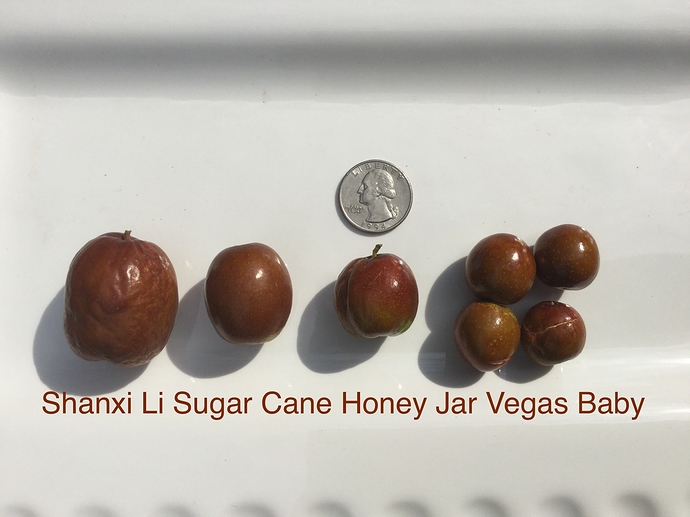 My Dong Zao (that’s what the tag says) graft is having two fruit, about to turn brown.

Those were centimeters, right?

Yes, but there are two scales. One imperial and one metric. If you look closer you’ll see. That’s why I used vernier caliper

And must say that I’m satisfied with productivity of shanxi li. I transplanted it twice, while tigerttooth is in the same place. Shanxi li do not flower so much as other one but have decent amount of fruits. Lets say at eastleast 20-30 of them. And they are really good. While tigertooth is later one and does not have so much fruit to eat even if has 3x more fruit than shanxi li. To mention that those two jujubes are apart from each other about 15m or 50ft with grapevine,apple and pear between them. Tried to graft ttooths this spring but it my percentage was 0

I think that scions was too long on the way here. My friend couldn’t bring them personally cause covid outbreak so it was sent by mail. I have some hopes to get more scions and try again next year.

Shihong does stand out, it caught me off guard.

Oooh man, I have one seedling of it. I can’t wait to fruit and see if they will be like mother tree. Raf sent me some fruits of few varieties and I have 4 small poted seedlings. Only 1 seedling from 4 varieties, some didn’t make it. Precisely two seedlings dried for some reason. But now I have tripled the number of jujubes

“Imperial (system)” I have not heard that word being used for a long time. I call it an English measurement system.

Where I came from, we use 3 systems, Metric, English and Thai.

Where I came from, we use 3 systems, Metric, English and Thai.

i haven’t heard of thai system. And as I remember in school we learned about imperial system of units. Except British the whole Europe uses metric system of units.
Raf the so/contorted is showing different pattern of grow, so I hope that maybe will be somewhat like mother tree. Will take some photos tomorrow of those potted seedlings.
I will let all of them to grow and see when fruit what to do next. But probably I will let them like that, and probably graft some branch with other varieties. My plan for spinosa rootstocks failed, Cliff sent me wrong type and all died first winter. I had hundreds

Will search for some more seeds.

Looking froward to seeing those babies

When I did so, I noticed that the soil was very dry, even a few hours after it rained. So, I dug a slightly bigger hole and mixed some compost into it, around the rootball from the potted tree (JFaE sends ~3 gal pots).

Fast forward 2 years and the AB is still at 4’ and has a couple small fruits.

So, here is the fruit from the Autumn Beauty at the dry location: 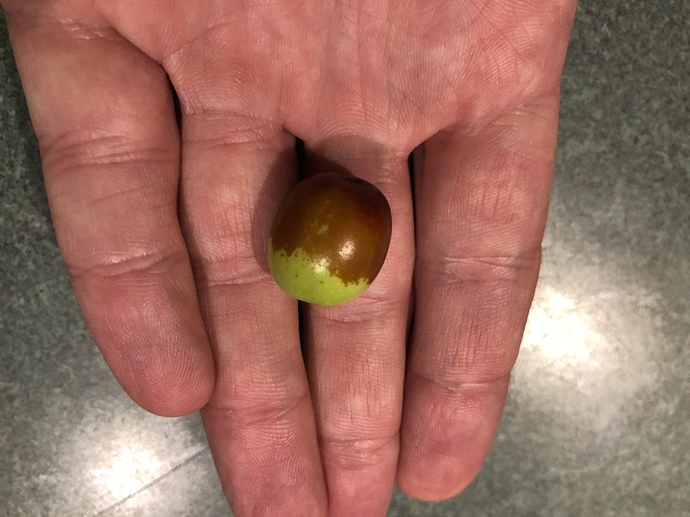 For comparison, here is one from my yard (actually, the last one on the tree): 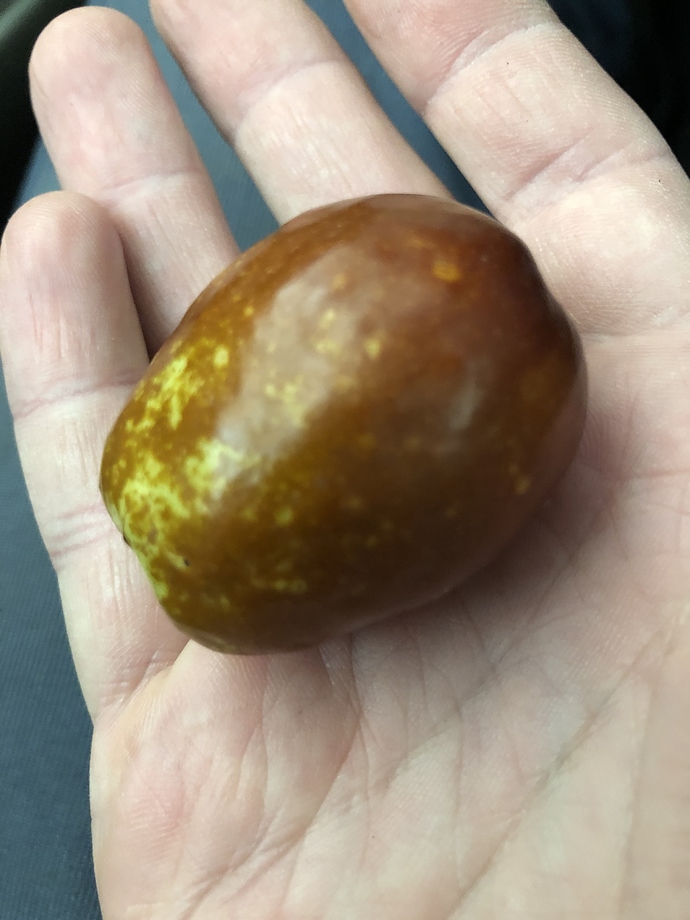 I stopped by a different rental which has a bit more water retention and the Russia #2 were ripe and very good, with brix in the upper 20’s (28, I think).

The Honey Jar at another location seem to just be starting to ripen. I picked them a bit green, as long as there was a bit of brown on the fruit. In the upper right of the pic is a Lang, which was not very good at all from a texture standpoint.

The Honey Jar in this pic are 20-22 brix. They could go 10 points higher if I let them fully ripen, but I’m not sure there is time and I’ve seen increasing losses this year, I assume due to animals (though it could be people at some properties). 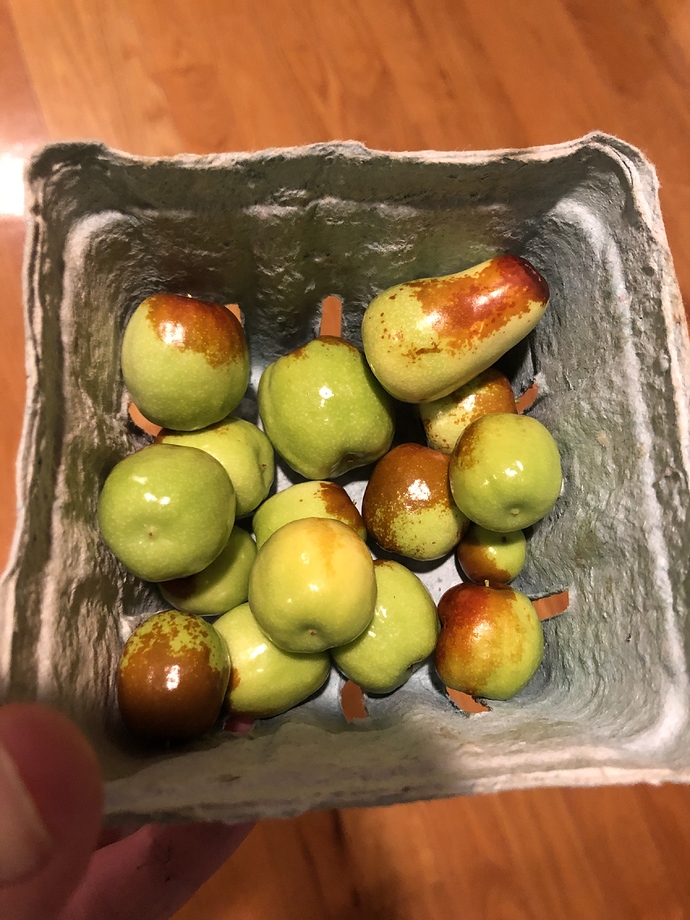 Here’s the Honey Jar from yet another location. The first one had the slightest brown, so maybe (some) of them will ripen after all. The fruit only set 1-2 weeks into August, so I had my doubts about it being able to ripen. Tomorrow is forecast to get down to 42F, so it won’t be too long before we get a frost. 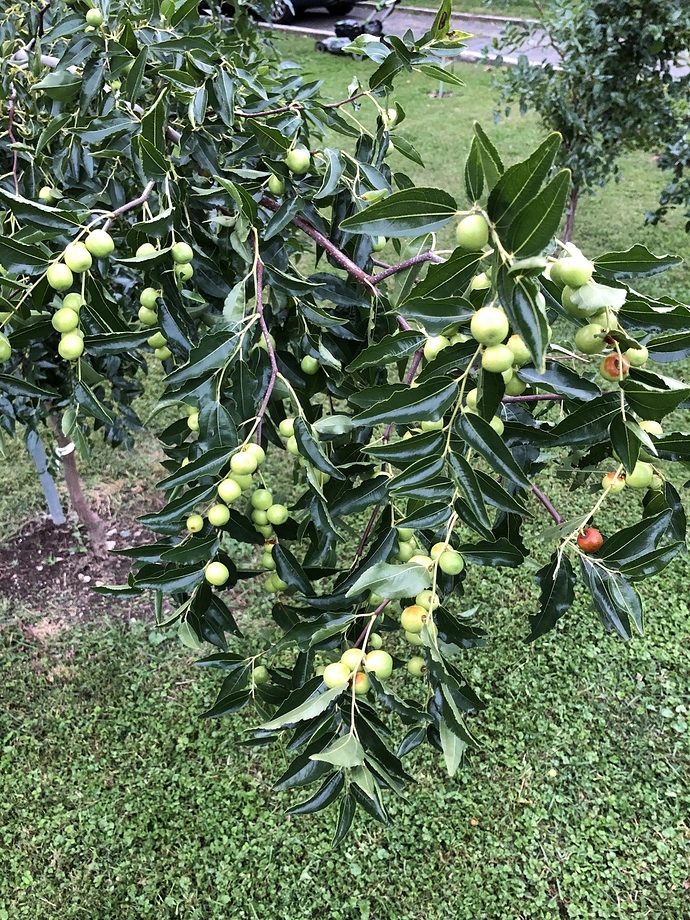 @BobVance
I don’t worry about HJ not ripening. Once they start to turn brown, they seem to ripen rapidly. We will get down to 38 F tomorrow.

I just over 5 lb of the combination of HJ, SC and Shanxi Li today. There are less than 2 lbs left on SC but maybe, 3-4 lb left on HJ.

I don’t worry about HJ not ripening. Once they start to turn brown, they seem to ripen rapidly.

The ones in my yard are 4/5ths done, while one property is 1/4 done and the other is 1/50th (just starting). I think the ones in my yard had more constant water, so they set earlier, while the others waited for rain to set (we had a hurricane in the first week of August, which probably helped).

So it seems that you can make the harvest later with poor care, but you may be able to make it earlier with care. Maybe even late varieties could ripen here, given the right treatment?

Tonight I noticed that the last 2 (of 3) Orange Beauty were ripe. There were also a few Black Sea for comparison. In looks, they are very similar, both having the nose-tip. In taste, the Orange Beauty has a much stronger flavor, while Black Sea has a lighter and crisper texture. People who focus on texture (like my wife and daughter) will like BS, while I’m not sure which I prefer. I need more sample of both 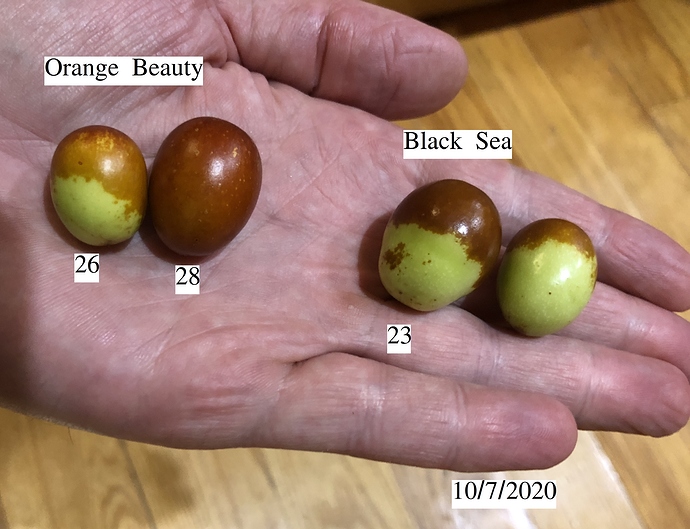 Speaking of texture vs taste, I tried picking a green Li. I think someone had mentioned that they were good, even green. Well, one bite was all I needed to disagree. So bland. My wife took it and finished it, saying it was pretty good, so I guess it’s a matter of taste. 9 brix is OK for watermelons, but not for jujube… 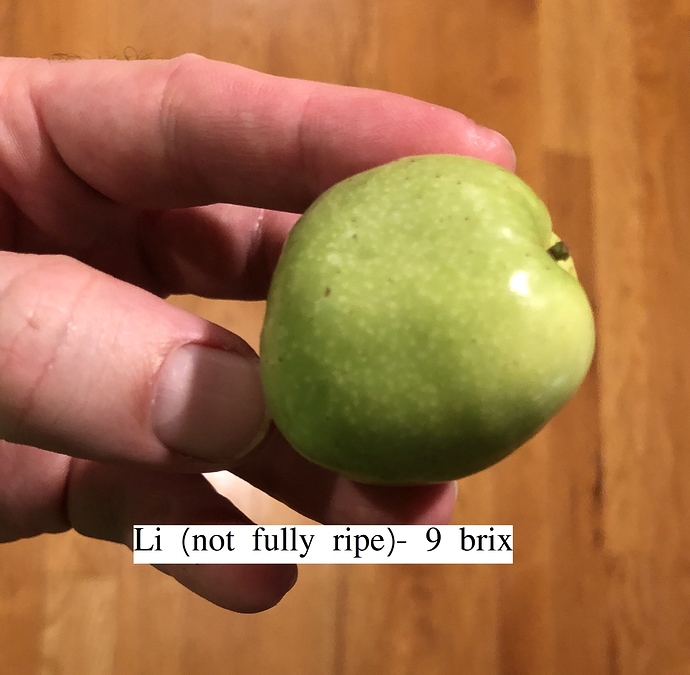 have the same sentiments as your wife. Li has a brisk, minty flavor when full-sized but still green.

Also try Orange Beauty when it is dried.

Orange Beauty when it is dried.

Too late- this was only the 2nd year and it had just 3 fruit (3rd was eaten a week+ ago, and wasn’t as good at the barely brown stage), all of which ended up in my belly. But the graft put on some good size (about half the tree…), so there is good hope on more production next year.

Li has a brisk, minty flavor when full-sized but still green

I didn’t detect any mint, though that would have been another strike against it for me. I don’t like mint even in ice cream.

I ate a fully ripen Orange Beauty last night and it tasted good but I still think HJ and Sugarcane are much sweeter and better. IMO.

a fully ripen Orange Beauty last night and it tasted good but I still think HJ and Sugarcane are much sweeter and better. IMO.

SC and HJ both had much more crisp juicy texture. I think the interesting thing about OB is the acidity/flavor. When I first bit into it, I was disappointed, but after a minute I noticed the differences and liked it. It doesn’t take the place of HJ/SC, which are mainstays, but It’s good to have some variety in jujubes.

I may add a graft of OB to one of the sites with moderate water that won’t get irrigated much. That way I can use them for drying without feeling that I’m wasting fruit that could be eaten fresh.

At a time when I was already getting a lot of jujube from the yard, my wife found some in a Korean grocery store. Hopefully they will continue to have them even after the season is done here. They weren’t cheap at $15 for 2lbs, but they live up to their name “Hi Brix”, as they maxed out my refractometer (over 32 brix). They had some crunch still, but were not crisp.

Anyone have ideas as to what they are? I’m guessing Li, but am far from certain. None of the pits had viable seeds. 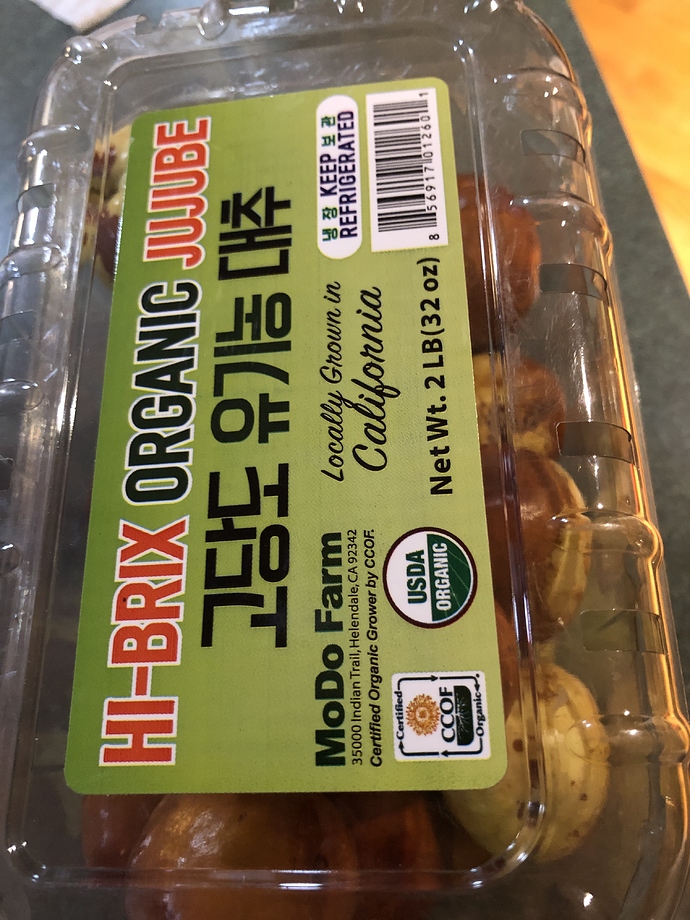 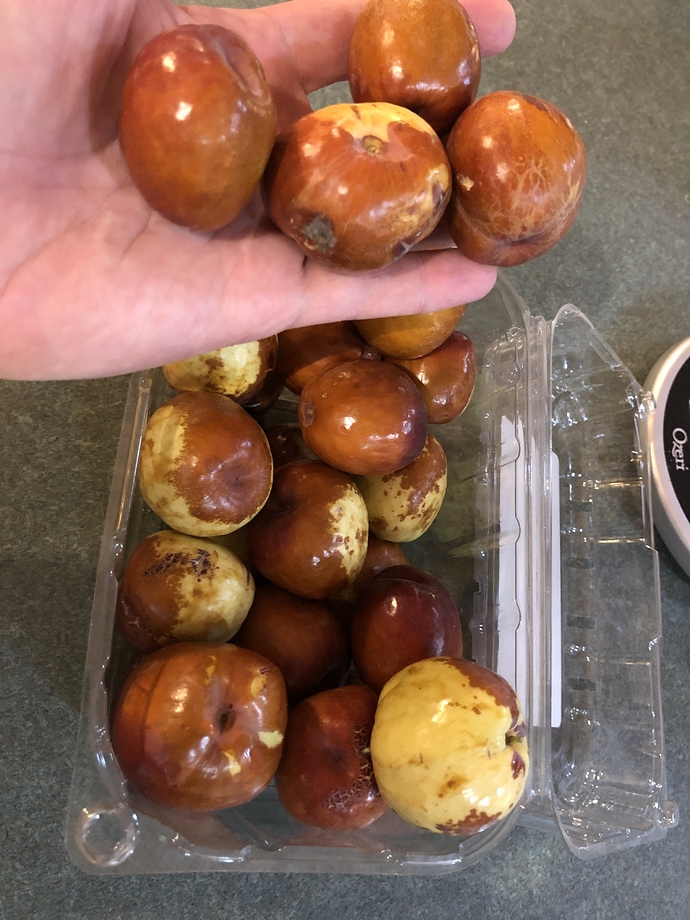 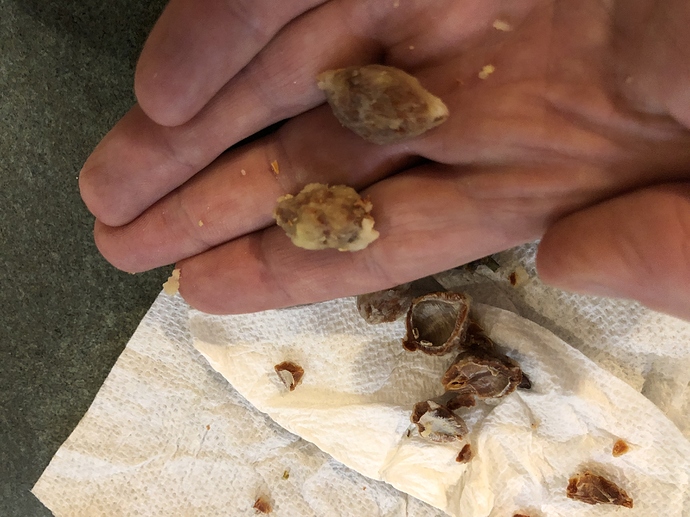 definitely li, just by your description. Thought 5$ a lb is atrociously priced when i see it being sold here.

anyway, li and lang are still the most commonly grown jujus in this country. And li is definitely the better option compared to lang
was just looking at website below and seems to be another korean grower in california

Please check out all the wonderful produce from Mary's farm

Those are the same ones I posted about a couple of weeks ago. I bought them at an H Mart in the Chicago area. I can’t find that thread though. I don’t think they’re Li.