So far have eaten Tasty Rich and Tomcot off K1 this yr. Brix has been about 20 and 24 respectively. That’s about 3 points above Citation or Lovell in prior yrs. More importantly they both tasted incredible. Downside is small fruit.

This is inline with prior experience with this rootstock involving pluot, nectarines, and apricot.

The other potential downsides are a short tree life and graft incompatibility. Don’t know how much that will come into play but it’s possible.

Why short tree life? I would think they would live much longer then say a Lovell? Or is it just a climatic thing (i’d imagine being from Russia they would prefer a cooler climate, but who knows).

I have 5 of them but they all need to be budded this summer. Mine are all blooming. Have no idea if they produce edible fruit. I plan on using might for everything…I also have Krymsk 86 right next to them that i’ll compare with.

Why short tree life? I would think they would live much longer then say a Lovell?

I’m sure it depends on many factors and thus will vary widely. My prior trees didn’t die but were taken out for various reasons. One seemed unable to take up enough water to avoid shriveled fruit. Peaches and nectarines may have compatibility issues.

Today’s Tasty Rich harvest off K1. The fruit is both tasty and rich. These are my best ever Tasty Rich and I’ve had abundant fruit every yr since 2005. 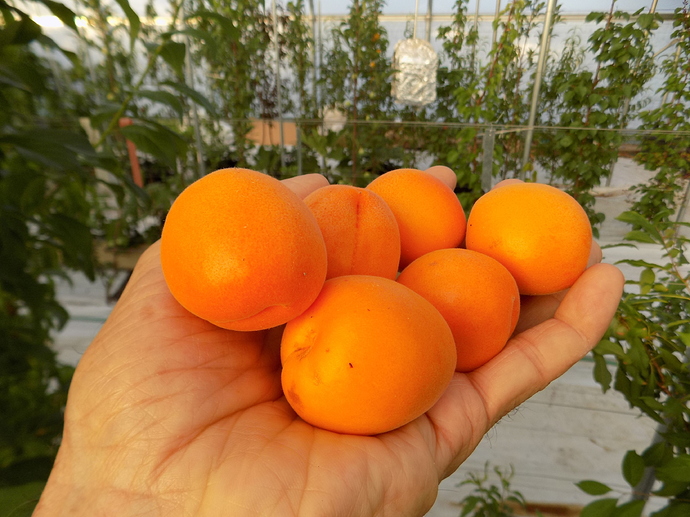 Fruit on tree behind is Flavorella, the next to ripen. 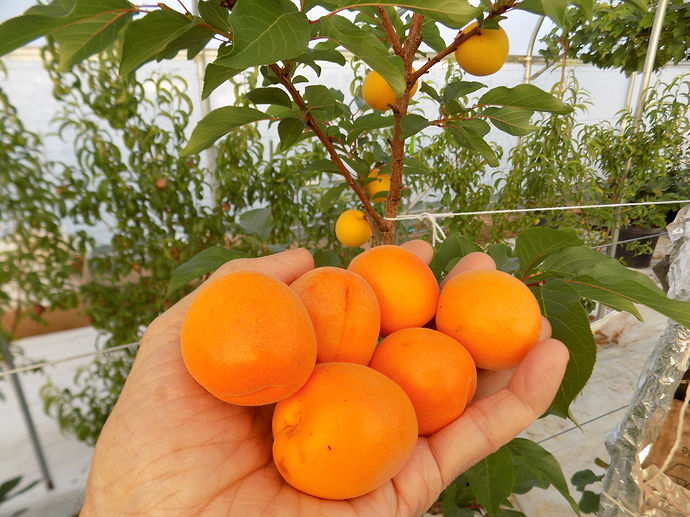 Wow… those look incredible. I’ll have to look into adding that at some point.

I had a bad experience today with my Robada. So the tree is loaded with flowers…bees hitting it for days…today my daughter asks why the tree looks dead…i said the petals fall off as the fruit starts to grow…well…the fruit ain’t growing~! Took 2 seconds to figure out what the deal was… borers. The tree is grafted to peach. I found the borer damage. Looks like maybe a couple fruit…its pushing new leaves, but its going to be set back now until next year. The reason I’m going all in on Krymsk… borers have just been a pain to deal with up here…and i spray during summer for them…but i must just be timing it incorrectly or the pressure is just insanely high.

I have some apricots on Krymsk 1. For me it has been a total dud, no vigor. I bought 10 of them 10 years ago and only 2 are alive now.

Ray don’t expect larger fruit. I’ve never seen anything like that. Also Scott’s experience will probably be what many see. I’ll be happy with a few yrs of great fruit. So far I’m happy but it’s very early.

Those don’t look too small to me,fruitnut,but maybe I’m missing something. Brady

Steve, thanks for the update. I’ve planted 16 K1 rootstocks about a month ago, so I’m very interested in your observations. Did you see incompatibilities with peaches or nectarines? If yes, what are incompatible varieties?

My Krymsk got a fair amount of abuse, I had to move them several times early on. But they would take forever to re-establish after I moved them. Its a very unusual rootstock unlike any other stone fruit stock I ever tried in terms of lack of vigor.

I’m going to try Krymsk 1, Krymsk 86 and pluot seedlings with peach/plum/apricot and see what happens.

I planted 5 Krymsk 1 last spring and they hardly grew last summer. I’ll make note not even to bother moving them. A couple will have to go because they are too close.

Should I have gone with St. Julian instead? It is what it is, and maybe,
if I give them ample irrigation, and use care when planting them, and a little
rayrose TLC, they’ll be fine.

I’m done using peach seedlings. I need to find a peach root alternative. Prunus Americana is also an option…but i don’t have any to use right now other then a full size tree.

I assume peach is not hardy enough? I have had uniformly excellent results with peach seedling in my climate, awesome and the added bonus of being free. Alan was complaining about lack of drought tolerance but I never noticed it.

I assume peach is not hardy enough?

My issue with peach is the borers. I lose more trees to that than anything else.

I planted 5 Krymsk 1 last spring and they hardly grew last summer. I’ll make note not even to bother moving them. A couple will have to go because they are too close.

I also got 5 K1’s last spring. One I bench grafted and planted right away. While the graft didn’t take, it grew pretty well and has 4 shoots which are 3-4.5’ tall (and it flowered this spring). All the ones I planted in pots grew very little, even the ones I planted out later in the season. The one which I successfully grafted (Old Mixon Free peach) grew only about 8", though I’m hopeful that it will put on more growth now that it has been in the ground for the fall and winter.

Given their lack of growth, you may not need as much spacing as normal. I’ve got mine at 3’ spacing and thought I would have to prune a lot to keep them in bounds.

Borers mainly… Container grown peaches that get borers almost never make it. The trees just don’t have enough trunk there to survive. In ground peaches that i’ve had borers with usually make it through even a bad case of borer attack. I’m spraying…but obviously not the right thing or not enough or not at the right time. Maybe if i can figure it out, I can multiply my Krymsk 86 into more trees and use that since it seems like the holy grail of peach root alternative.

Should I have gone with St. Julian instead?

Ray, if you want a normal size tree with normal vigor, then yes you should have looked elsewhere. If you want a small tree with potentially great fruit then K1 is worth a try. I have no idea how the tree will do in your area.

I get bad borers on all peach compatible roots in my orchard: guardian, pumiselect, etc. Well, I should say “got”. Since I started painting neem on the bases my borers have gone to zero. I have not seen a single borer in over a year now.

I’ll have to try that. I was spraying permethrins mainly. I painted a few trunks with exterior paint. What i think is happening is that i water so much during the summer, that anything sprayed gets washed away quickly. Probably need to not be getting the trunk with the water.

Citation has worked well for me. I have a few trees on that with no issues over many years now.

Climatically no peach is really great for here and any year could possible kill everything (our records go as low as -40Fs!). -20F ish is about average every winter for a min. Even -11F this year killed off most fruiting buds. So outside peaches are a year by year thing. Container peaches have never missed a crop (except for borer damaged trees).