King of the Pippins

Anyone growing King of the Pippins? From the descriptions I’ve found it’s a late small apple. My King of the Pippins tree ripened in mid-August and were medium to large apples. Mis-labeled scion? Perhaps but it was from a trusted sourse. Very delicious apple and disease and mostly bug free. 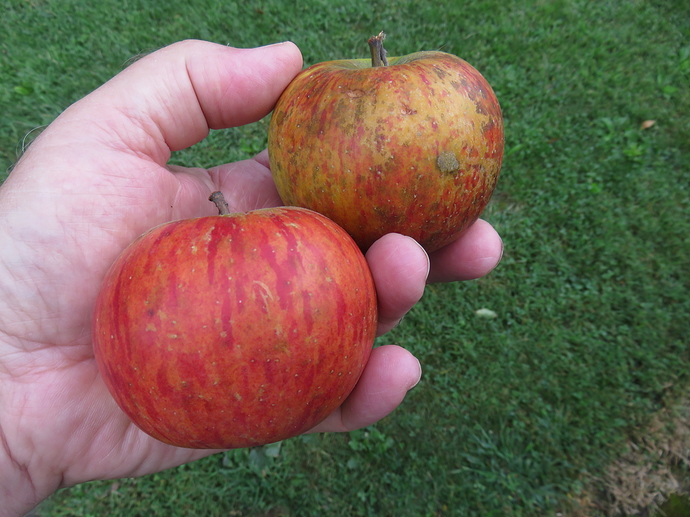 They are sometimes small and sometimes large. Those look like the real deal

It is one of my favorite apples, I really like it both fresh and cooked. I am a bit surprised how ripe yours are, they are ahead of mine by a bit.

Mine is on second year got it from TOA. Hopefully mine are the same.

I love the colors on the those. The skin would look like a gourd if it had warts. It annoys me how the primary focus these days seems to be breeding fruit to look identical red, and hard enough to stack like cordwood.

From the descriptions I’ve found it’s a late small apple. 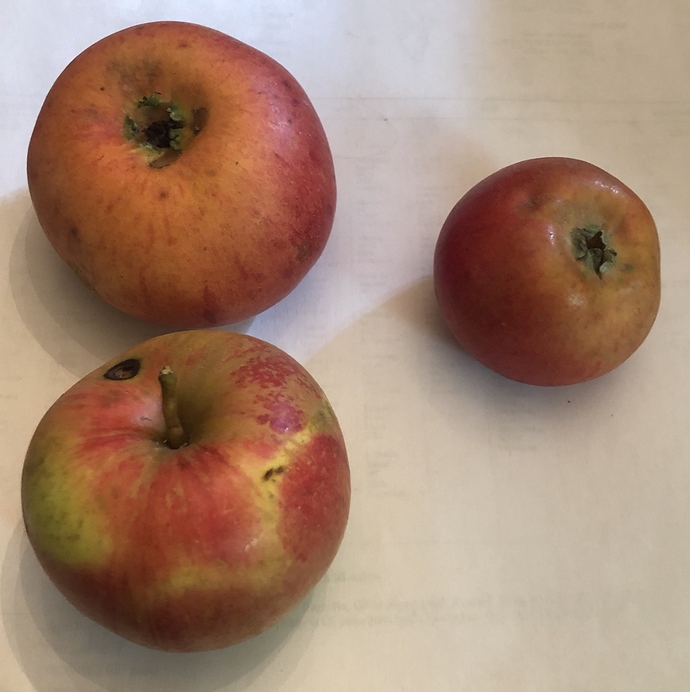 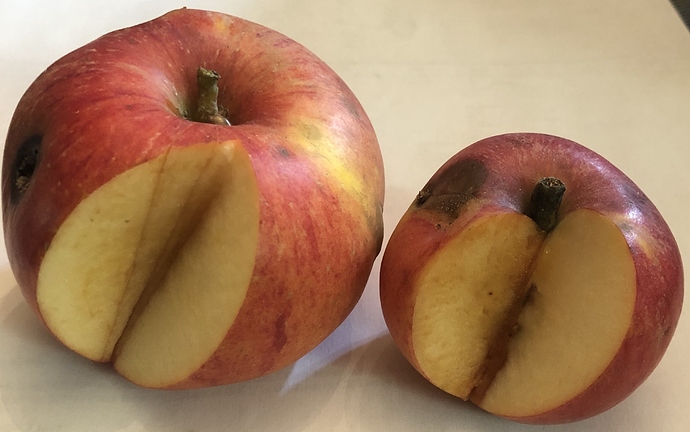 image2454×1537 515 KB
We’ve had a King of the Pippins tree for 15 years, but a Reine des Reinette for only four. This was the first year we could compare the two. On the left are two RdRs. On the left is a KoP. All are recent drops – overnight or early this morning.
Differences:
Size: our KoP has consistently borne small fruit, never any as large as the RdR tree produced in its first year. Scott has said above that size may vary, but I figured that was different sizes of apples on the same tree.
Ripening times: Neither are ripe, but the RdR we cut into was much closer to being ripe than the KoP. A sweet taste has already come through. My guess is that it is a week or more ahead of the KoP.

Similarities:
Skin: pattern and coloring similar. Beautiful. There was a greater difference between two RdR apples than one of the RdR and the KoP
Texture: Both quite crisp
Juiciness: Both have a similar moderate juiciness
Browning: Both browning about the same, but the KoP a little faster

TBA:
Flavor: Have to wait until after they have both reached full maturity. I know from previous years that King of the Pippins will have great complex yet well balanced flavor with contrasting sweet and tart. The RdR is showing signs of that already.

Too small a sample to make any real conclusions, but based solely on this one test, they do appear quite similar, but not identical.

There is a pretty good chance they are different sports… on any variety that old and that common there are bound to be lots of sports.

I have two (well now three) trees of this variety all of which are from the same source. The two that are fruiting have one producing larger apples than the other, quite consistently. So there is not much to go on from that.

One came from Cummins, the other I grafted from ARS-GRIN scionwood.

Are they on the same rootstock?

King of the Pippins on G16. Reine des Reinette on B9.