I have been assisting Kiwibob Glanzman in Seattle with a project to hybridize hardy kiwi and yellow kiwi. The yellow kiwis, Actinidia chinensis, are large fruited with really nice flavors and store well, but are not reliably hardy past zone 7a and tend to ripen too late in the more northern areas. Hardy kiwi, Actinidia arguta, are much hardier and earlier, but have small fruits that tend to drop when ripe and have limited shelf life. They also have a wider range of desirable flavors, often with really high sugar levels. The edible skins are also desirable since there is no need to peel. The smooth skin trait is dominant, so hybrids with yellow or fuzzy kiwi will also have smooth, edible skin.

There are two ploidy races of yellow kiwi, diploids and tetraploids. Hardy kiwi are known that are 2X, 4X, 6X, 8X and even 10X, but all but one variety available in the US are 4X. The one exception is the small, round fruited form of Issai, which is 6X. Crossing to create interspecific hybrids is much more successful when the crosses are made between selections with the same ploidy level, and the resulting hybrids are much more likely to be fertile.

I have two chinensis male seedlings I grew many years ago from seeds from China from a ‘Kuimi’ fruit, a tetraploid, with an unknown pollen parent. These have done well for pollinzing some things, but last year I sent pollen to Kiwibob and a few others, and most attempts failed. The fruit either failed completely, fell off before seeds ripened, or had no viable seed. The one exception was my Kens Red, which had a lot of fruit drop, but also produced viable seeds. I even have one of these hybrids that produced a fruit last year, when pollinized by the same Kuimi males, and have many seedlings from that fruit growing now.

After the failures last year, I had the ploidy estimated by flow cytometry to see if there was something odd going on. There was, my seedling males are both triploids! The fact that they were reasonably fertile was a bit of a surprise, but I’m now realizing that is not unusual for Actinidia.

For this year, I had several varieties tested to try to find 4X males that could be used to repeat the crosses this spring. I also tested some of the Auburn material. The results showed that one male from the Davis repository, Bliss male, appears to be tetraploid. Their other males appear to be diploids. I also confirmed that AU Golden Dragon is a diploid and AU Golden Sunshine is a tet, and that AU Golden Tiger is actually 5X. A fertile pentaploid male could still be useful, but maybe not as desirable as a tet. I also found that the Bliss Yellow female from Davis is also a pentaploid, and is likely a cross between a yellow and fuzzy kiwi. It does have fuzzy skin and stiff hairs on the dormant wood like a fuzzy kiwi, but with yellow fleshed fruit.

The folks at Davis kindly sent me some fresh pollen a few days ago from the Bliss male A. chinensis. I’m now looking for some help in producing some hybrid seed for Kiwibob and anyone else wanting to help evaluate the seedlings. The most desirable situation would be anyone with females about to bloom, but with no males around. That would insure the crosses are true. However, anyone else that is willing to bag some flowers and make controled crosses are also very welcome to help. If anyone has any of the extremely hardy Russian argutas available, that would also be really desirable.

I have the pollen dried and frozen in aliquots. It will be sent in a tube with dessicant and an ice pack, and can be kept in the freezer until ready. Please PM me if interested. I don’t have a huge amount of pollen, so I can’t promise everyone pollen that wants to help, but I’ll do my best.

For anyone wanting to read more about the project, please take a look at Kiwibob’s web page. 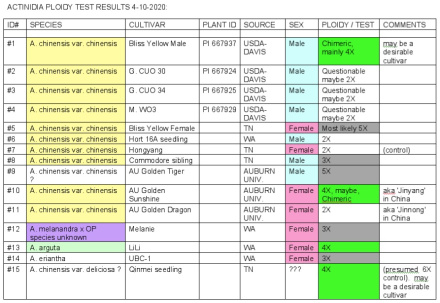 HARDY KIWIFRUIT BREEDING PROJECT 2020 REPORT-3 (SUMMARY REPORT) November 8, 2020 Less than a week after the July 15 posting of 2020 REPORT-2 most of the berries shown in that Report had aborted! It…

Bumping this topic. I’ve got some 1st and 2nd year seedling yellow kiwis coming along here in suburban Philly. Can anyone suggest how many years to first bloom, and pruning techniques to encourage early fruiting?

3-7 depending on a variety of factors and the sex of the plant.

I have seen males bloom in 1.5 years from seed under optimal conditions. Females typically 1 or 2 years longer than males. The size of vines seems to be related to first blooms, so faster growth results in flowers sooner. I’m not sure if pruning makes much difference, but early to mid summer pruning can result in spur type shoots that are more likely to flower the following spring. 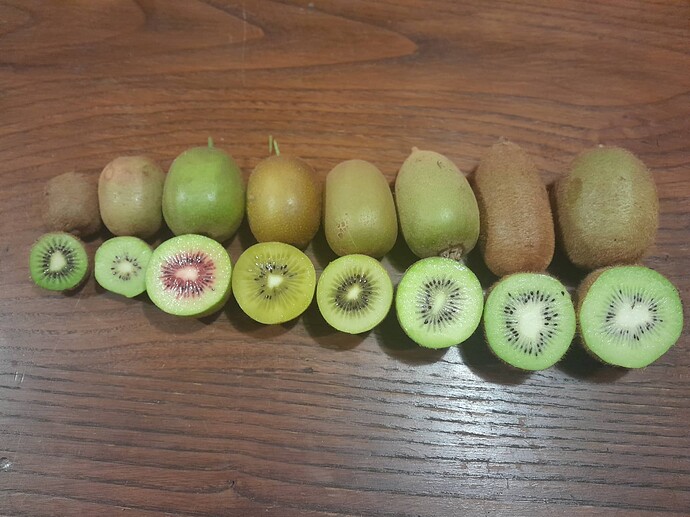