List of Mulberries (Morus) cataloged by NCGR with links

Since the NCGR system is a bit daunting to new users, I compiled this list of Mulberry (just Morus) including links to any cultivar and species information they have:

Thank you Richard…You made my work of listing mulberry varieties on my website (in development) much easier. I have been pursuing two tasks as of lately: One…Gathering information for my Growing Mulberries website, and Two…Trying to make a dent in the mountain of misinformation on mulberries (mainly concerning Morus nigra). I have contacted three nurseries so far, trying to get them to quit misidentifying Morus albas as Morus nigra (such as Dwarf Everbearing). Jujubemulberry was able to send me Morus nigra leaves for my microscopy study of Morus nuclei (I have developed some simple techniques that allow me to get good nuclei stains in a consistent manner). I am also trying to get Morus nigra seed, to see for myself the difficulties in growing Morus nigra in Florida. I purchased seed from Great Britain because they have a huge number of M.nigra trees…but microscopic examination of one of the seedling showed that it wasn’t. Now I am waiting on an order from Turkey. I am still hoping to find a Morus nigra that has adapted to Florida weather, but have been coming up empty-handed.

I am also trying to get Morus nigra seed

The cultivars worth growing are seedless.

“The cultivars worth growing are seedless.”
That may be true, but my Master Gardener friend claims that a tree grown from seed in your particular area adapts to a climate much greater than a grafted or cutting grown tree brought from some other location. I am just trying to unravel all the mysteries surrounding Morus nigra: Many authorities claim that Morus nigra can’t be grown from seed (I have proof that that is not so), and others that say it can’t be grown in the southeast.

my Master Gardener friend claims that a tree grown from seed in your particular area adapts to a climate much greater than a grafted or cutting grown tree brought from some other location.

Your friend is repeating heresay. I have plenty of counterexamples. However, if you wish to start a horticultural breeding program in FL I recommend you contact UF/IFAS.

“I recommend you contact UF/IFAS”
Yes! Yes! Thank you,Thank you Richard. What an excellent idea. There seems to be a resurgence of interest for growing mulberries. UF is much better equipped to initiate a successful breeding program, if it is possible. I can see it as a major win for them if they can produce a patentable variety of Morus nigra that can flourish in the southeast. They, at least, can tell me if it is possible. Morus nigra, being a 22x polyploid, is resistant of modifying since it has 22 expressions of the same gene (I don’t pretend to understand the genetics, so I won’t express anymore of my ignorance in this matter).

Morus nigra, being a 22x polyploid, is resistant of modifying since it has 22 expressions …

A cultivar is a variation of phenotype, not genotype.

This is terrible, but I remember eating mulberries at a bamboo nursery in central Florida.

In hindsight I can’t say with absolute surety that it was a mores nigra, but chances are it likely was

I will see is I can figure out where it was. Who knows maybe I might need to visit them again (though the remaining bamboo I got from them is doing wonderfully this year.

my Master Gardener friend claims that a tree grown from seed in your particular area adapts to a climate much greater than a grafted or cutting grown tree brought from some other location.

Your friend is repeating heresay. I have plenty of counterexamples. However, if you wish to start a horticultural breeding program in FL I recommend you contact UF/IFAS.

I think there is something to that notion, but not as described.

If you discover a “wild” seedling that is producing worthwhile fruit, it is likely better suited to the area than most random crosses. It has already run the gauntlet, so to speak. Its siblings and cousins, with inferior genes, likely succumbed before reaching that state.

It has proven it is suitable to the environment, by definition.

If you discover a “wild” seedling that is producing worthwhile fruit, it is likely better suited to the area than most random crosses. It has already run the gauntlet, so to speak.

Yes. As a selection from a number of wild individuals we would term it a cultivar.

Its siblings and cousins, with inferior genes, likely succumbed before reaching that state.

And further, there are probably some of its siblings still in that wild area but with inferior tasting fruit and/or other undesirable characteristics for a crop. That is why we didn’t select them.

apart from bud sports, the vast majority of excellent fruits known to humankind originally started as seedlings. And they all got promoted through repeated hearsay and basic word-of-mouth.
@Livinginawe is doing many a great favor by his optimism and open-minded stance by not limiting his options.

and yes, bud sports were promoted via hearsay too. Often before any gov’t or academe manages to procure specimens

When we are talking of suitability to a particular environment, I think it is reasonable to refer to a seedling with superior phenotype as expressing superior genes. It was already qualified by the phrase “better suited to the area”. When I said “inferior genes”, the implication was for the area/environment.

I think it is reasonable to refer to a seedling with superior phenotype as expressing superior genes.

No. All the seedlings of the same mulberry species have the same genes. Different cultivars of the same species might have different phenotypes. We graft desirable phenotypes of mulberry and many other species/hybrids on to rootstocks etc. because they are not reproducible by seed. This is not to say that all plant families are this way, but it is true for Morus (mulberry).

Richard, thanks for clarifying. I’m guilty of shallowly reading only the most recent posts of the threads that look interesting. If I’d read further back for context I mightn’t have looked as foolish.

If I’d read further back for context I mightn’t have looked as foolish.

I contacted UF and finally received a reply (after second email). But even if they undertake this project and are successful at producing a cultivar or hybrid, I can see it taking a decade or two. Like most Americans now days, I want instant gratification; which brings me to this question: Have you ever heard of a Morus nigra hybrid? I have two scientific PDF’s that refer to this unicorn (I tried to attach them, but they exceed the 3 mb limit), but I can’t find any other internet references to this beast. The paper from Azerbaijan refers to an F1 hybrid of M.nigra x M.alba. From my understanding, it is rare for similar species to cross when one of them is highly polyploid.
At any rate here is my email to UF’s Plant Breeding contact:

No folly. I will pass your suggestion on to our breeders that work with these types of crops and can bring it up at our breeders meeting in a few weeks.

I supposed you looked at my email and felt it was pure folly to try to produce a patentable hybrid or cultivar out of such a high polyploidy species as Morus nigra. I can only refer you to two documents (attached) which suggest such a hybrid is possible. Although I am not aware of a M.nigra x M.alba hybrid here in the US, I feel such a hybrid would be adaptable to the humid southeast summers.

Please hear me out. Mulberries have seem to have made a resurgence because they are easy to grow, they require little fertilization, are drought resistant, produce abundant fruit in just a couple years, high in antioxidants, low in calories, etc. The king of mulberries is the Morus nigra species. It is irrefutably the best tasting mulberry. It also does not flourish here in the southeast (Don’t be fooled by nurseries claiming to have Morus nigras that do well here, because they don’t. One in particular is the “Dwarf Everbearing Mulberry” which is claimed to be a Morus nigra, but is not.)
Looking at UF’s “Research Roadmap”, mulberries fit perfectly in that scope: “• Breeding and biotechnology of improved landscape varieties that use fewer natural resources • Tropical/subtropical plant breeding”. Developing a patentable cultivar of Morus nigra could be a huge win for UF.
Please tell me your thoughts.
Thank you,
Mark Travis
Gainesville, FL

Have you ever heard of a Morus nigra hybrid?

That’s what Black Beauty is. Look it up in the references I posted at the beginning of this thread. You’ll also find two more.

Best wishes to you.

I went over to Canada yesterday for dinner. It’s only about 20 mins away, including the bridge (or tunnel).

While there I saw a mulberry with very interesting foliage. The leaves were small, 1-1.5 inches long and the fruit was very small. Quarter inch or so, at most. Also the leaves were shaped far more like my Cudrania than any of the mulberries I have growing or have seen. It was in the yard of a person who lived next to the parking lot we used. I would have tried to get a picture, but a neighbor was very interested in my curiosity in her neighbor’s back yard. Anyone ever seen a mulberry like this before?

Wife’s dinner was good, mine not so much. I really should avoid seafood (calamari) from a bar/grill in the Midwest. She had braised lamb poutine that was excellent. While my food was not good, the craft beer was excellent. (Forgive my tangent)

seems like the canadian curio you’re describing is similar to mine… Did it appear similar to this? It is supposedly a ‘Dwarf Everbearing Black Beauty mulberry’. With such tiny leaves(for a mulb) and somewhat like cudrania, and with short internodes.
It is sold by logee’s nursery. 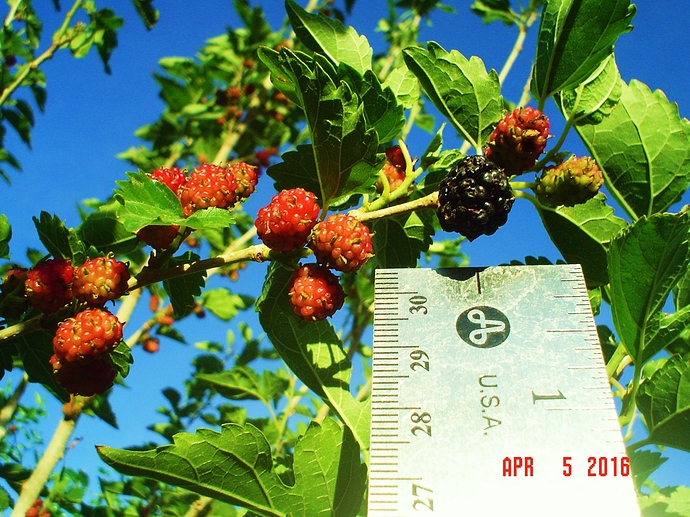 btw, gerardi dwarf mulbs also have smallish leaves, but fruits are usually more than an inch long, like miniature pak’s

Looks similar. How is the fruit? I’m sorry I didn’t have an easy way to access any that hadn’t already stained the ground. I was looking up at it growing over an 8 foot fence.

Have you ever pollarded a mulberry tree? I’m wary of doing so, but my I.E. Is easily 20+ feet tall and I think I’m only feeding birds and squirrels with it now, I have had a handful, but even getting them is work.