The common goose foot ( lambs quarters ) here is mostly:
Chenopodium album - from the old world. ( or hybrids ?)
Chenopodium berlandieri is the new world type , referenced in the articles above. The cultivated northamerican stain of which may be lost to time ? It had a thinner seed coat.
Both can be used similarly, and yah ! They grow like weeds!

Some biologists will argue it was managed by the black bears.

Do you think passenger pigeons had a large part to play in managing this forest? While their small size would have likely prevented them from dispersing larder seeds, their manure deposits would have changed the ecology greatly. I have heard anecdotes that some of your tree diseases may be worse now that trees aren’t having massive loads of phosphorus etc dumped on them regularly.

There are members here who will testify to the extreme poop output of black bears.

(" extreme poop output of black bears.")
Yah, especially when feeding on apples !
There are lots of seed in those piles , they just don’t tend to poop in a straight row .! And the trees end up like a folded umbrella .
Have seen them treat large juneberries the same way, in the mountains, which may have benefited from the bear pruning and seed dispersal

I definitely have seen blackbears spread raspberries and other berries here in colorado and if you follow game trails its almost all berries (Service berry and chokecherry also) and they seem to help spread thimbleberries as well. While they would also help space out trees in a forest slightly just by bustling between them, I do not think they would be responsible for the mass amount of symbiotic plantings of 3 trees/bushes and the spacing of these food forests. I will try to find some articles but there are so many native american (From north to south) examples of symbiotic plantings (many in pairs of 3) as well as the north american native tribes and there reported purposeful plantings of the blood peaches as a good example of how quickly they purposefully spread and cultivated the trees.

And yet berries are a fraction of the black bear diet.

As a recovering ecologist, I’d like to note that

In short, human management heavily influenced the North America first encountered by Europeans, but it was definitely not a wall-to-wall food forest utopia.

The Little Ice Age must have put the skids to North American indigenous cultures such as the Mississippian Culture, the Tiwanaku Civilization around Lake Titicaca in present-day Bolivia, and the Ancestral Puebloan Culture in the three centuries between 1130 and 1430 AD. I think it goes without saying that it did for the Viking settlement in Greenland. European disease was also a significant factor in depopulating North America.

No one sticks up for Andrew Jackson anymore because of the institutional racism he represented so well, but his is the first quote that comes to my mind concerning a hypothetical economic collapse prior to European settlement of North America.

The population of North America had been reduced well below the carrying capacity of the continent somewhat before Europeans got their act together here.

That they did. I don’t remember enough to put any kind of number to it, but between Columbus and other Spanish explorers making initial contact and the time you get to Jamestown, it’s widely believed* that a basically apocolyptic wave of disease killed off a substantial (probably more than half) proportion of the native population. So Europeans walked in to what looked to them a largely unpeopled wilderness, but it was really the remnants of a carefully managed landscape. The managers died not long before the European settlers got there.

*Pardon my lack of a credible source.

Pardon my lack of a credible source.

Me, too. It oughtn’t to be that hard. What’s wrong with us?

After around 1130, North America had significant climatic change in the form of a 300-year drought called the Great Drought.[27] This also led to the collapse of the Tiwanaku civilization around Lake Titicaca in present-day Bolivia.[28] The contemporary Mississippian culture also collapsed during this period. Confirming evidence dated between 1150 and 1350 has been found in excavations of the western regions of the Mississippi Valley, which show long-lasting patterns of warmer, wetter winters and cooler, drier summers. 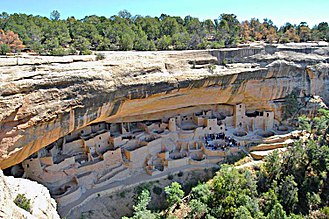 During the period from 700–1130 AD (Pueblo I and II Eras), a rapid increase in population was due to consistent and regular rainfall patterns supporting agriculture. Studies of skeletal remains show that this growth was due to increased fertility rather than decreased mortality. However, this tenfold increase in population over the course of a few generations could not be achieved by increased birthrate alone; likely, it also involved migrations of peoples from surrounding areas. Innovations suc...

Sorry, I was re-editing my post when yours came through.

There’s a lot of goosefoot growing here in NW Arkansas and it makes a tasty, nutritious snack. I once found a very large goosefoot plant tht I later identified as Mexican goosefoot. Not nearly as tasty and as I recall, it was said that it should only be eaten in small quantities.

Do you think it’s the pitseed goosefoot
Or the Alba

Only going back to 750 AD seems a bit short sighted, as does considering humans as the only vectors and limiting the involvement of black bears to berries.

For those interested in forests “managed” by indigenous peoples, check out the study from a decade ago concerning the Amazon basin.

For those interested in lost crops, there is more information out there too. The SW US was a Savanna in recent history and agriculture was practiced by the peoples there.

I guess I’m not really sure what your assertion is. Could you clarify?

I’m just commenting on the discussion.

I’ve been harvesting Stinging Nettles in the spring and trying them. Put them in my coffee maker with tea, dried mushrooms, coffee and chicory root for years. Scrambled eggs with spinach and reconstituted mushrooms. Can’t get enough of mushrooms!

I think the idea is that there are too many food forests throughout the amazon for the indigenous peoples not to have helped make them and that there definitely used to be a large civilization that lived on the amazon basin. Recent lidar shows immense buildings geometrically designed and laid out irrigation areas. Almost all the trees near these are fruit / medicinal trees.
Its amazing how much we grow that is edible that we have no idea about.

Although the Lidar analysis is from the past decade, much of the reconnaissance took place 20-30 years ago and the data is now public.

The original Native Americans in my family thought in terms of generation and in hundreds and thousands of years. The buffalo were native americans version of cattle but not used in my family as far as i know, the trees were used for food eg. Pawpaw, persimmon, acorns, walnuts, butternut, etc…Deer, rabbit, etc. were extra meat and hides. Some natives ate deer etc only when the buffalo were roaming elsewhere. Family members have never sprayed anything and still harvest wild greens etc. Every year. In my family most of us still grow gardens and frequently we plant wild plants we want to harvest some years down the road. My aunts and uncles still eat from my grandfathers trees. My grandfather was eating nuts, berries etc. From the native americans plantings. Never let anyone convince you it was an accident! You are now living in a neglected garden. Kansas had no trees because the native americans burned it off for their livestock the buffalo to have grass to eat. The three sisters were grown together always beans, squash , and corn. Did they work 8-5? Did they use chemical? Did they need modern medicine? Did they have an erosion problem? Was anything polluted? There were no taxes. They lived just as long as we do in my family without anything we have. They had no large standing armies which is why they were taken over. Fish flourished in the streams but many natives would not eat them they did however use them for corn fertilizer. The natives frequently did suffer great hardships when there were crop failures. The buffalo were killed to a point of being nearly extinct to conquer the natives. Diseases such as small pox were brought as gifts in terms of blankets to kill them. Many of my family were married to whites and never went to a reservation but the ones who were members of full tribal council in oklahoma im sure are still there today. Im whiter than most everyone now but still 1/16th native. Many skills have now been lost but they passed on what they could to those who wanted to know. Im a leftover of what was passed down from hundreds or thousands of years. I grew a pumpkin as a child that grew wild with no fertilizer or tending that insects would not bother. The pumpkin that looked much like connecticut field pumpkin was lost and like the people in my family will not come back and the world is a worse place for the loss. My grandparents did pass many unique plants to me i still grow to this day Blackberries by the gallons. A chief from another tribe talked to me many years ago about the cherokee and why we grew blackberries always but i could not answer most of his questions. His tribe used the blackberries when they named their children but unfortunately his people could not speak his language and lost all their crops through time. My grand father told me before he died i was the last person in the family with his knowledge and it will die with me. Ive shared what i could with others so i believe some of it will continue to be around after me. Many neighbors told me strange varities of blackberries and other plants began appearing on their properties around 25 years ago odly about the time i arrived. Wild bee populations also returned and many wild greens. The blackberries i grow spread quickly by seed through birds genetically slightly different each time. Some would say a person such as me has an agenda to help those ancient heirloom berries survive but the truth is its a mutual relationship my family has helped them through the last hundred or so years and they have helped us. Both plants and people are better off for the relationship. Many neighboring families commented to me wild blackberries showed up which they harvest every year. I think to myself my family must be proud because i passed on exactly what i intended to and will pass on everything else i have a chance to. Permaculture natural food forests are always my goal Non traditional Orchard methods. All relationships in nature are symbiotic Plant symbiotic relationships. Many who grow my families blackberries quickly realize 15 feet tall + blackberries are very hard to control as @39thparallel has witnessed Blackberries by the gallons - #52 by 39thparallel. There is more to it than blackberries Fungi Friend or Foe? or fungi or grass Cover crop and mulch recommendations . Many relationships of crops, fungi, bacteria etc. Are not widely understood and its unlikely they will be at least anytime soon Anyone finding fall mushrooms?. Some fragile and mysterious natural relationships once disrupted can take 20-100 years or longer to correct if possible at all.
Many of these relationships are not widely understood but we can observe some things Morels will be popping soon. There is always a way to correct soil and other things but it takes time Conserving valuable resources for late season plants. Its true some crops have been lost to time but we have also gained others equally as valuable https://growingfruit.org/t/carmine-jewell-cherry-yields-increasing-with-age