Thought some would be interested in seeing what the committee here in Maine is thinking in regards to invasive plants and what can legally be sold in Maine nurseries.

33 plants were originally added in 2018 and a bunch more were just added this year that will take affect in 2024.

Here is the full Maine “do not sell list”:

The committee also completed their “watch list” of plants that are currently on “plant probation” and being closely monitored. The committee will review their findings on these plants in five years and may add them to the do not sell list if they are found to be invasive in that time.

Honeyberry may be a surprise to some. The worry is that it is a vigorous grower capable of hybridizing with the native honeysuckle ‘lonicera villosa’. Here is a paper written to that affect: https://www.researchgate.net/publication/338662532_Growth_of_Lonicera_caerulea_across_Fertility_and_Moisture_Conditions_Comparisons_with_Lonicera_villosa_and_Invasive_Congeners

I’m not claiming to agree or disagree with this list. Just posting for informational purposes only.

Interesting they may add rugosa roses to the do not sell list in the future.
After walking a good number of miles along Maine’s beaches, it would seem the cat is pretty much out of the bag on that species.

Yes rugosa rose has fully naturalized on the coast at this point. But it seems it only spreads vigorously where the rose hips can float out to sea and land on new beaches.
They even made a special category and rule set for this plant explained in the following article: 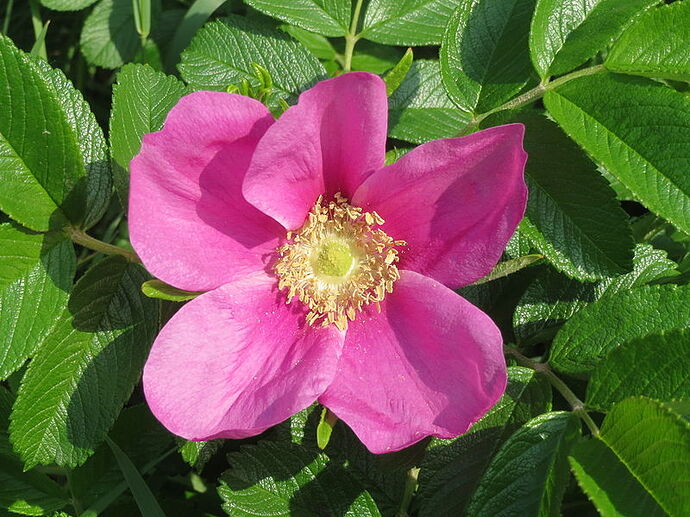 Maine lists 30 more species of invasive plants that will be illegal to sell in Maine by 2024 - the Rugosa Rose included.

I copied the relevant bit:

"The committee ultimately decided on the following compromise: Nurseries will still be permitted to sell rugosa roses, but a label will be necessary, either on the container, in the soil, or in the area of the store where the roses are for sale. The seller must inform the buyer about inappropriate habitats for rugosa roses and it must say “Invasive Terrestrial Plant Species of Special Concern.”

Rugosa roses, also known as “beach roses” due to their profusion on beaches, shouldn’t be planted there. [Rugosa roses] are extremely invasive near bodies of water; the rose hips, the red, Ping-Pong-ball-sized fruit that develops after flowering, can float far away from the original plant and possibly even travel miles. Rugosa roses, however, are not a significant issue if they are grown inland, far from the sea, lakes, or streams, according to Fish.

He went on to say that the beach rose is unique in another way. A cultivar created with an invasive species as one of its parent plants is prohibited by the invasive species law, but that won’t apply to rosa rugosa. Since it has been a component of so many hybrids for such a long time, it would be impossible to enforce such a rule."

I guess that makes sense.

I’ve planted dozens of rugosas here in hopes of them someday becoming similar to what I saw in Maine. I doubt that ever happens. We just don’t have the consistent moisture for them to get that big.

Elaeagnus species are very invasive in your climate.

I noticed a few trends in that list. The first trend is that a lot of those have the ability to spread a lot. Porcelain berry spreads by birds, callery Pear spread by suckers, and others of that nature spread by rhizome. Second thing I noticed was some plants banned require a lot of water like the Russian Olive is banned here for that reason. Others like to breed out native plants like the white mulberry breeds out the red mulberry. I can see the reason for that I suppose. If my neighbor was like me and controlled the suckers of callery pear I could care less but if they let it go I would be livid. Part of me wonders if we will ever see lists where plants like the pecan or walnut will be banned. Plants in the walnut family can certainly cause issues with many plants as things stand.

They added callery pear to that list. Was a little surprised but I shouldn’t be.

That’s quite a list. If I lived in Maine I don’t think I would be too happy with it- especially if they were trying to ban honeyberries. @steveb4 what do people in Maine think? Does Maine still ban currants and gooseberries too?

It does raise an interesting question about what is “native” and what is “invasive”. Some of those plants are native to North America and could have eventually spread to Maine on their own.

Another question- at what point would such a ban run afoul of interstate commerce? Let’s say Maine decides to ban honeyberries the next time around. Honeyberries are definitely a commercial crop. I don’t care about the weeds and trash plants on there, but I think ban on honeyberries would be something that could be challenged in federal court. There have been some interesting court cases surrounding crops and the powers of the federal government.

Wickard v. Filburn, 317 U.S. 111 (1942), is a United States Supreme Court decision that dramatically increased the regulatory power of the federal government. It remains as one of the most important and far-reaching cases concerning the New Deal, and it set a precedent for an expansive reading of the U.S. Constitution's Commerce Clause for decades to come. The goal of the legal challenge was to end the entire federal crop support program by declaring it unconstitutional. An Ohio farmer, Roscoe F...

Gonzales v. Raich (previously Ashcroft v. Raich), 545 U.S. 1 (2005), was a decision by the U.S. Supreme Court ruling that under the Commerce Clause of the U.S. Constitution, Congress may criminalize the production and use of homegrown cannabis even if state law allows its use for medicinal purposes. California voters passed Proposition 215 in 1996, legalizing the use of medical marijuana. The Federal government of the United States has limited the use of marijuana since the Marijuana Tax Act of ...

@clarkinks I figured that one would jump off the page for you. Ya I was a bit surprised as well, as I didn’t think it was spreading in this state like some more south. I guess very southern Maine has some stands of it starting to spread.

The southern half of the state still can’t grow currants and goose berries. They were banned decades ago as an attempt to limit the spread of white pine blister rust.

I’m glad to see burning bush on that list.

a ban that should have been discarded eons ago. there are so many wild Ribes growing throughout the state, this ban makes no sense to me. hell even N.Y got rid of theirs. Maine has one of the strictest ban list/ laws in new england and in my opinion is needless as we are also the coldest state and much of whats on these lists are marginally hardy here and wouldnt have the means to become invasive. i do agree some on that list are warranted but like Moose said, targeting a potential commercial crop that grows well where nothing else will is B.S. i think the folks that make these lists are on a power trip these days. most of them are in the southern Maine cites and dont give a damn about the people that live in the OTHER Maine. its always been like that but getting worse in the current political environment.

most of them are in the southern Maine cites and dont give a damn about the people that live in the OTHER Maine.

It is sad to see so many popular fruits on their radar. Sea buckthorn, hardy kiwi, honeyberry?? I wonder if someone could just sell/grow arctic kiwi instead.

I’d be horrified to see a nursery selling Japanese Knotweed or Porcelain berry. Those things spread liek crazy and are very hard to get rid of.

I kind of like wineberry (produces reasonably tasty fruit without much sun), though I understand why people might want to be rid of it. Nasty thorns and spreads fairly easily by birds. But it isn’t on the same level as Porcelain or Knotweed. I don’t try to eliminate wineberry, but I also don’t feel bad about pulling it up where it isn’t convenient, unlike how I’d feel about a nice yellow raspberry (which I’d try to let grow and transplant when dormant).

Hardy kiwi is definitely a strong vigorous grower. A single vine could smother a tree (or a person if they stood still for a bit

). We’re talking about each shoot growing multiple inches each day. But, I don’t think I’d worry about it from an invasive standpoint because it doesn’t easily spread. At least not here. I’ve had a number of vines for over 10 years and I’ve never seen a single seedling.

In terms of being able to kill kiwi, I’ve had a couple vines cut back to the ground (1 intentional, 1 not). Both came back , but not all that fast. I think if I did it one or two more times they would have been done. So, it is strong, but not bulletproof. The one which was accidentally cut down by a tree-cutter is doing fine and the one I wanted to get rid of (space issues) was trasplanted and is also doing OK.

Knotweed, you can cut back a dozen time and it keeps coming. I’ve been cutting back and bathing it in herbicide and that almost controlled it after a few years of effort. I still get some popping up.

But, a kiwi vine will put on a lot of growth quickly. Here’s one of mine that I didn’t prune for a month or two. The fruit at the bottom is on a trellis, about 6’ high, so the big arcing new growth is probably around 10’ now. I went through the other day and cut back a lot, but need to go our with the extension loppers to get the rest. 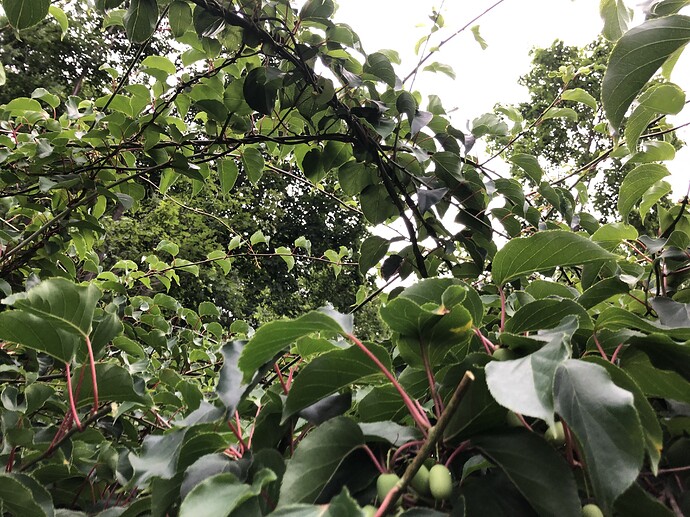 Hasn’t the Rosa Rugosa helped save the beaches from eroding? This is definitely one plant that has already naturalized. I’ve never heard anyone speak negatively about this plant…most people love them and they are now an iconic part of coastal Maine.

I have 2 of the plants on this list…and I’ll be keeping them.

good question. why honeyberry? we have native honeysuckle in Maine and honeyberry isnt invasive at all . many on this ‘’ list’’ shouldnt be there. someone’s on a power trip.

Hasn’t the Rosa Rugosa helped save the beaches from eroding?

High vitamin C, pretty flowers, and erosion control sounds like a benefit. I’ve only seen them self seeding in sandy beach areas.

i frequented the beaches down Everetts way. the roses are beautiful! full of pollinators. only drawback is poison ivy likes to grow in there as well so best to keep your distance.