By John S PDX OR

Many times in the last few decades I’ve been trying to graft a particular variety of fruit that I am very excited about. I am talking today about whip and tongue grafting, the kind normally done in the spring. The problem is that the only scion I could get was a very, very small one. As most of you know, most grafters prefer a scion that is about the diameter of a pencil. Somewhat less is fine, and somewhat larger is also fine. Much larger or smaller creates problems.

However, sometimes the only scion you can find is tiny. Maybe it was the last one in the container at the Fruit Propagation Fair. Maybe it was the only one your friend could spare from his or her young tree. I have grafted many small scions. At first, I broke a high percentage of them. When you use the same rubber band around it as you would use on a regular scion, there are problems. First of all, you have a lot of extra rubber band, because it’s so small. In addition, many of them break, because they can’t withstand the same force of wrapping them tightly together. Finally, the cut has to be more precise, because any errant cut can destroy the scion and eliminate the possibility of cambium connecting.

As I thought of these problems, I wondered what I could do to make the situation better. I asked some friends at HOS and they suggested I try bark grafting, as that type of grafting works well with small scions. The problem for me with bark grafting is that only rarely can I store scions for that extra length of time. We cook and eat dinner together as a family and I can’t use up refrigerator space like that. It’s a great idea for those who do have the refrigerator space, though.

I thought of a gentler way to wrap the scions together so that the force wouldn’t break the scion. Normally, I can’t wrap them with as much force as I can a larger scion, because they would break. As a result, they aren’t held together as well, and more air can enter between the two pieces of wood. This dries out and kills the graft. This is especially true because my cuts are often less precise on such tiny wood.

For summer bud grafting, I usually use parafilm to hold the bud in. I had never heard of anyone using it for spring whip and tongue grafting, but why not try? When I did, I noticed that I needed less force to use the parafilm than to use a rubber band, which was nice. As a result, I broke no scions. I try to stretch the parafilm around either the buds or scions on each turn, as I notice that it holds a tighter wrap around them and presumably lets less air in. It also binds the two pieces of wood together better, ensuring a better bond for the graft. Because I wasn’t using any grafting compound, I made a few extra wraps around the scion, to prevent the entrance of air more completely. 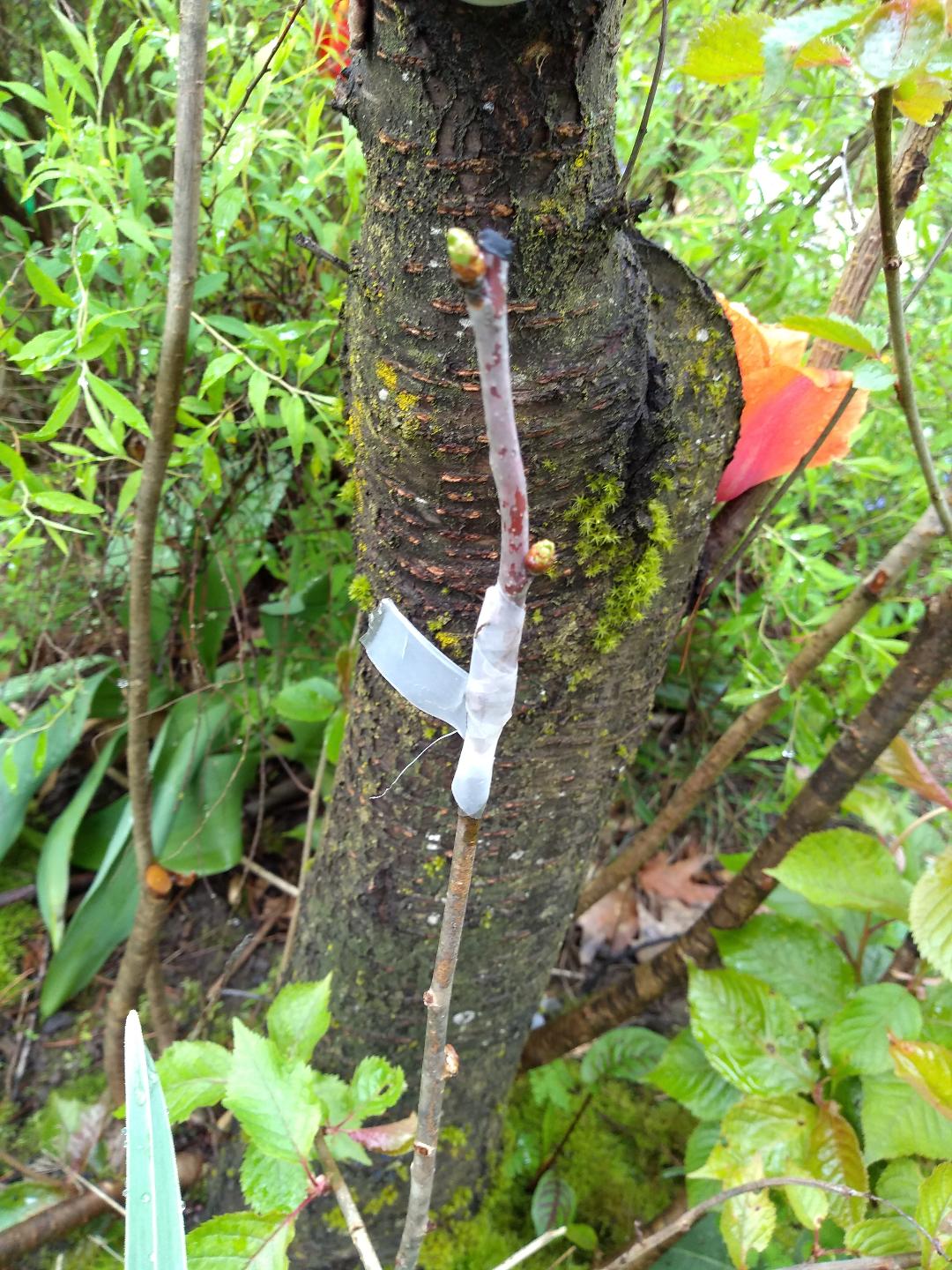 Using parafilm for spring grafts is pretty common, I myself have been doing it for at least a dozen years. I guess it is not common with the HOS though.

I would agree whip and tongue on really small scions is difficult.

I have found a cleft or saddle graft gets better results. But, in any case, a tiny scion will take longer to become a bearing tree in most instances. Grafting onto a bearing tree will speed it up, and also improve the odds of a ‘take’, or it has for me.

I don’t need to use as much force with the parafilm as I do with a rubber band, so I don’t snap the tiny scions as much. Sometimes you just have only that scion and one imperfect rootstock. I have done cleft grafting and I like it, but usually with the rootstock that is 1/2 inch or larger in diameter.

If you use buddy tape, you can stretch a section of it (buddy tape comes perforated) and twist it. It turns into a fairly strong thin rope. You can use it to hold the graft in place prior to sealing it with buddy tape. I’ve used this to do many green grafts successfully including very soft and thin kiwis, loquats and figs.

I am not sure this same thing works with parafilm as I haven’t tried it.

I am not sure this same thing works with parafilm as I haven’t tried it.

Works the same with parafilm. I usually just twist it during wrapping, in other words, one handed as opposed to how you have to use 2 hands to avoid the twisting.

About the thinnest scions that I have grafted were 1/8" thick pomegranate sticks that had been clipped in late Winter and grafted in March as the pom trees began making baby leaves. I bark grafted them to 1/4" to 1/2" thick branches, first wrapping the wound with Parafilm to seal it, spiral wrapping a 1/4" wide rubber band on top for compression, wrapping 1" wide white plastic flagging on top to keep the 2 lower layers from the Sun light deteriorating them and shading the wound area from the same Sunlight. To seal off the above-graft scion, I sprayed a light coat of acrylic clear coat paint. Even the very tiny pom buds could bust out through the acrylic when time to swell came along. On branches thicker than 3/8", I sometimes put 2 skinny scions, each on opposite sides of the branch. Trying to stretch and wrap the thin, flimsy scions with Parafilm is not practical and not necessary. The thin pom bark does not require much band stretching to make it snug against the thin scion, as opposed to compressing jujube wood tight against a cleft grafted scion, which by comparison needs a winch or come-along with 1/4" cable to pull the pieces tight.