I was at a nursery in Willits, California this morning, looking at the selection of bare root trees. I came across the most amazing specimen called a miniature nectarine. It has a fabulous habit with a disproportionately large trunk below the graft. They only get about 4-5 feet tall with a habit that could almost be described as contorted. It definitely has serious bonsai vibes.

I think it would look fabulous in my garden near a stand of yellow vivax (timber bamboo). My yuzu trees also grow nearby, so this miniature nectarine would really solidify the feeling of a Japan landscape. Perhaps a zen garden in a foothill region north of Tokyo.

Does anyone have experience growing these miniature fruit trees? I’m concerned about peach leaf curl since I would be planting it in a very wet region of western Oregon. I’m also curious how the fruit compares with other nectarines and peaches. 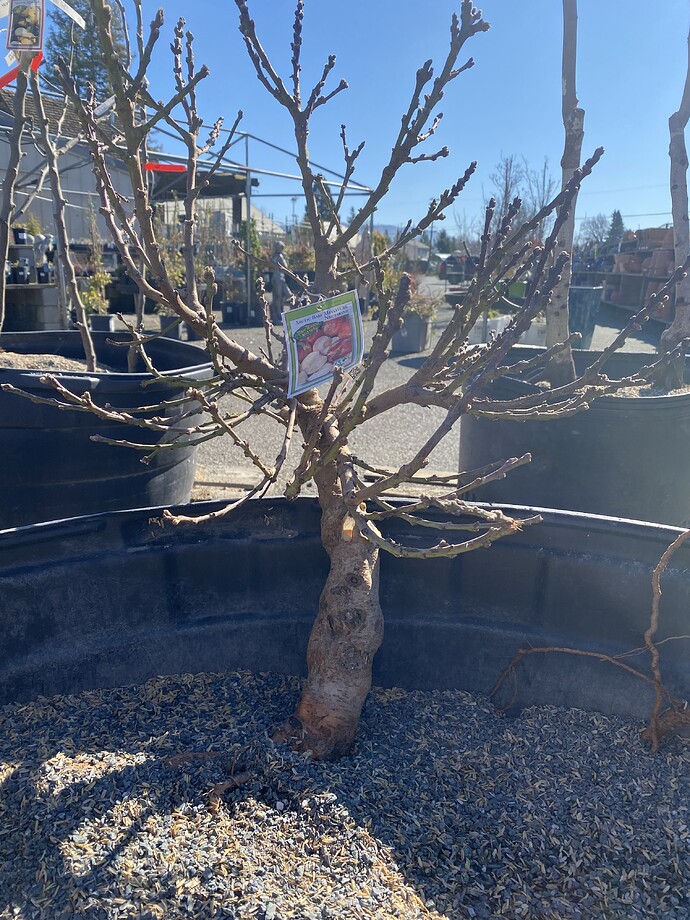 Peachleaf curl is easily prevented with a spray before bud break. Don’t worry about that.

What is the best spray? I read that Bordeaux treatment is effective. I’ve also heard some people who don’t favor it.

I asked about miniature peaches and miniature nectarines came up too. They call them genetic dwarfs. Basically they have different nodes that naturally dwarf them. The only fruit that most consider halfway decent is the Nectazee nectarine which need to be zones 7+. They only grow a few inches per year which is a good and bad thing. Deer or a rabbit bites off growth on a regular tree in a year it will be even bigger than before in a year but a genetic dwarf will take years to recover. Bear_with_me has a lot of experience with these. Bear_with_me has stated they had some issues with fungal issues. Then of course the smaller a tree you have the less fruit you will get.

western oregon is the major leagues for PLC, spray schedules that work everywhere else in the country are less effective here. the upside is, if you can beat PLC then you have a super dry summer and almost no further pests and disease, so the battle is over

I spray copper+nufilm, lime sulfur+oil (wilco carries lime sulfur and oil), and ziram+nufilm (keystone carries ziram) with the ziram timed as close as possible before bud break. sulfur and ziram have safety requirements that need some respect, but they’re among the best sprays. copper is less effective. see this old post especially the pacific northwest IPM website

thanks, those reports are helpful. I guess we’re all looking for the same thing, a silver bullet variety that doesn’t need sprays. I’ve never seen any kind of controlled testing comparing peach varieties so everyone’s experience is going to be a little random my study of the ag extension guides was interesting. here are two tests of copper vs. ziram: you can see that copper is better than nothing but ziram is on a whole other level. the other common recommendations are lime sulfur and ch…

I have six or seven genetic dwarf peaches and nectarines going into their 2nd/3rd year, in western oregon. they’ve done well for me, they grow about 1 foot/year (some have a lesser form of dwarfism and grow more). I let them bear ~5 peaches/tree in their first year and I’ll do about 15/tree this year. ask me in 2-3 months whether I beat PLC this spring… last year I had perfect control but it could be that it hasn’t spread to my backyard yet (the neighbors all have it). I did have two get pretty bad powdery mildew, if that becomes a trend they’ll get culled

Of the miniatures I’ve tried - Bonanza, ElDorado, Garden Gold, and NectaZee - Necta Zee is by far the best tasting. The others are really blah. After 6 years, I pulled Bonanza, Eldorado, and Garden Gold. Because of the short internodes you get a LOT of fruit set … you have to be on top of the fruit thinning. It does get PLC here but it is easy to cover from November to May. Otherwise limesulfur + copper can reduce the PLC to about 10% here.

Thanks so much for the detailed response. This helps a lot. I am in zone 8b, so that won’t be a problem. To protect from deer, I built a 7’ cedar fence to enclose my entire orchard, about 1/3 acre. So deer never enter my yard anymore. I have two cats and about the only critters that enter my yard are the squirrels. My neighbor has a pit bull, so that probably also deters rabbits from congregating in my area. I have never seen a rabbit in my garden. The squirrels are constantly digging in my potted plants and raised beds, but so far they haven’t damaged anything permanently. In terms of the fruit production I’m not too concerned with the small yields of a miniature tree because I already have an 8’ foot nectaplum that gives me large amounts of fruit. This tree would be more for the aesthetic qualities that it adds to a portion of my yard that has a distinctly asiatic feel. If the fruit was known as piss poor I might not get it, but if the only downside is a small yield that won’t deter me. In terms of the Pacific Northwest issues with PLC I spray my trees and so far I haven’t had any major issues. Though the winter and early spring can be quite wet, so I expect some issues eventually. You are correct about the bone dry summer. The dry season actually starts in late Spring and continues into the early fall. While we still get some rain in May and the early part of June, the amount of rainy days is less than 10 in those two months combined. September only averages about 3 rainy days, and October 9, though most of those occur in the last 1/3 of the month. So our dry season is just about 6 months long. Thanks again for your detailed response. It has convinced me to go for it. I think the $36 price tag also has me convinced. I have seen these online for over $100, which would probably deter me.

If you want one that tastes good I would seek out a Nectazee as I and other person pointed out. That is typically regarded as the best genetic dwarf nectarine.

I wouldn’t be too deterred by other’s comments about the taste of dwarf peaches/nectarines, especially if aesthetics are your primary focus. Based off of the photo you posted, you’re looking into an Arctic Babe nectarine. This is a relatively new release from Dave Wilson (2019 I believe), so I would be hopeful for better taste and traits compared to earlier releases. I have an Arctic Babe myself and wish I could give some specific feedback on taste, but mine is young and didn’t flower last year.

For the $36 dollar price tag and the overall look of that tree, I personally think it’s a steal.

I have a Sensation genetic dwarf peach. It’s fruit is fine, especially considering I do nothing for it! They are on the small side and quite fuzzy, I usually cook with them so I can cut out any worms.

Is the nectazee the same as nectaplum? If so, I have a dwarf. It’s about 8’ and does pretty well.

Arctic babe is the only type they have. I’d never heard of them, so I think I’ll go for it. Everything I’ve heard on this thread is that I shouldn’t pass up the bargain.

arctic babe had the worst powdery mildew for me last year, but good fruit set and grew fine. both the fruit and leaves had powdery mildew but the fruit still matured, it just messed up the skin

Is that kind of thing common with stone fruit where you live? Where are you located?

Eugene, no it’s not common, I think it was aggravated by morning shade. it was one of two of about twenty in the same conditions to get it last year (2 got it, ~18 didn’t)

Wait, so you have 20 Arctic babe miniatures? Or do you mean 20 trees of variable type? The be got to say, I think 20 miniature trees would look fantastic in winter.

20 different kinds of stone fruit, only two got it to a bad degree. some apples got it too but that’s expected here depending on resistance and they grew out of it, did have some netting on fruit but still ate fine. I don’t think it’s something I’ll spray for

I have tried many and the Necta Zee is the best so far and only original mini nectarine left here. I planted both the Acrctic Babe and Arctic Sprite, hoping they are better than the old ones. The AS is highly regarded by Tom Spellman, check out the video. That looks like a very nice specimen you found in Willits!

Which video? I don’t see one linked in your response.

Everything I’m hearing is this specimen is worth trying out. I really love the look of it without any leaves.

It’s weird that’s it called “miniature” but it’s listed as being on Lovell rootstock, which I thought was standard. Is that a misprint or am I missing something?