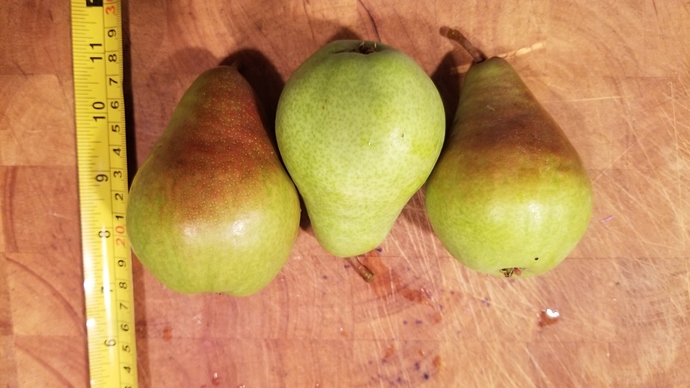 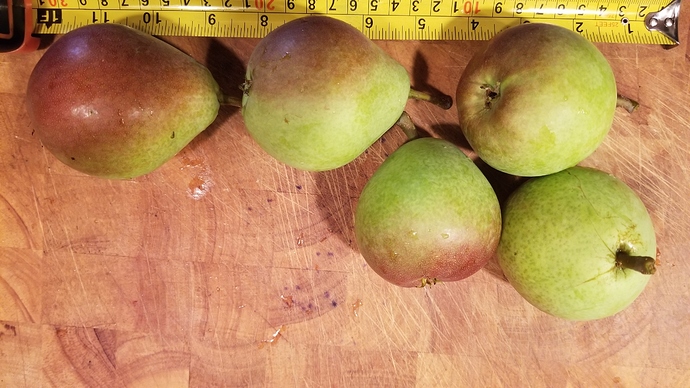 Nice looking pears. Let us know how they taste. I was looking at getting one of those pears. I had not know anyone else that had one to let me know what they thought of them. Any Fire Blight issues with them? I am in zone 5b as well.

Let us know how they taste.

I’m interested to hear as well, as I haven’t been thrilled with Ubileen.

This was my 2nd Ubileen harvest and I’m having a hard time getting them just right. Last year I picked them too early on 7/15 and too late on 7/31. This year, I picked them during that 7/20-7/31 time-frame and still didn’t get any which are just right.

Here’s one I left on the counter for about a week after picking. At least the seeds are black (12 brix). Do they turn that way on the counter, or was this one just riper to start with? 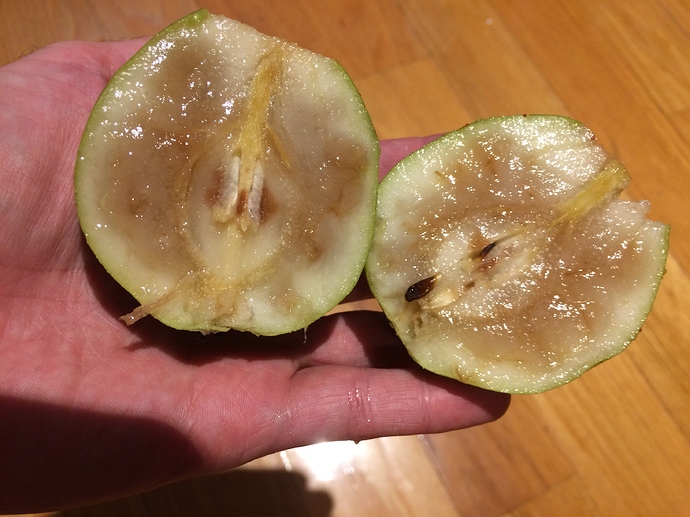 Here’s one I picked a couple days earlier and kept in the fridge for a week and a half. It was hard and not at all flavorful, with 10-11 brix.

I had one which was in between (white seeds, but decent texture) and ~11 brix. OK flavor, but somewhat bland. 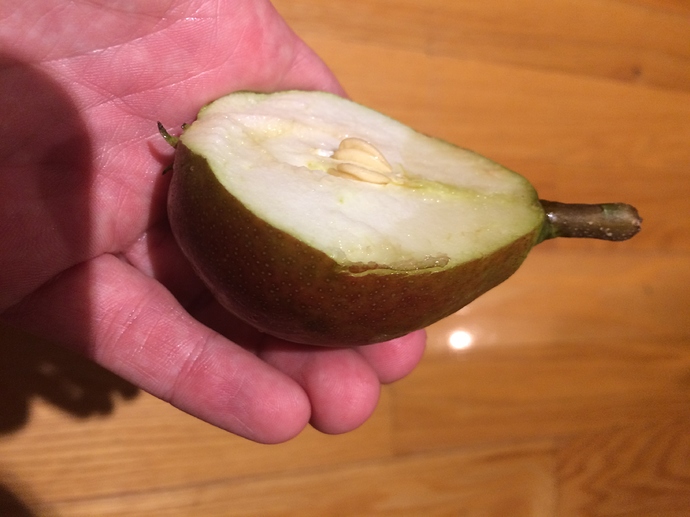 Right now, I’m kind of glad that I’ve been grafting over my two Ubileens. It is a wonderful tree to use as a host for grafts, as it is a strong grower, with nice clean foliage. Kind of like how @alan likes to use Shiro. The similarity goes even further, with both being early season, with bland low brix fruit.

This is the first crop ever from this tree. I put them in the fridge. Will give them a week and then 1-3 days on the counter and will report.

This is what Raintree says:

"A large, sweet, aromatic, pear from Bulgaria. The skin is yellow with a pretty red blush. The flavorful flesh is fine textured and buttery. It is harvested in early August and top rated among thousands of pears from around the world at the USDA national pear Germplasm Repository in Corvallis, Oregon."

top rated among thousands of pears from around the world at the USDA national pear Germplasm Repository in Corvallis, Oregon

Yup, that’s why I grafted it. ARS gave it their highest quality score (8 I think). But rather than “A large, sweet, aromatic, pear… flavorful flesh” I would describe it as “medium sized, mildly sweet, somewhat bland early season pear with a narrow harvest window.” I guess nobody will hire me to do nursery descriptions…

Edit: To be fair, I would also include “healthy vigorous growing tree”. The fruit was also clean, other than some stinkbug corking.

Maybe it is the growing conditions. Both Raintree and Corvallis are in the same area and not near us.

Bob,
That’s why we rely on actual backyard growers for honest reviews.

@MES111 , I will be interested to hear your reviews of both pears. Bob, you and I live in the same vicinity and have a similar growing climate.

I bought the Ubileen pear tree this spring from Raintree nursury based on that description. I’m sorry to hear it hasn’t tasted as good as you hoped.

My tree grew for the first month than got flooded out and hasn’t grown since. The leaves are still vibrant green and it looks fine, just won’t grow.

Those look horrible. I would do the same thing as you, graft over them. TY for those pictures. Seeing them is a lot easier than trying to describe what a mess they are there for you.

@MES111 How did the Morettini pears taste? It sounds like a nice variety.

Its interesting my small yellow pear is tricky to pick so much so hours make a difference but ofcourse the difference is when its on its the best pear i ever ate. It will go from perfect to rotten on the tree quickly. It will not store long after being picked but the unique flavor makes me forget all of that.

tricky to pick so much so hours make a difference

So what do you use to tell you that it is ready?

Was that one that you sent me wood for a couple years ago? From what I can see in my records I see you sent me some pears and some apple seedlings, but I don’t see any pear seedlings.

The small yellow pear is very high quality but not prior to ripening is not. I use my thumb and push into the pear and wgen its ripe you can physically feel the give in the neck. The green gives way to a slightly liggter greenish yellow color. A few pears ripen and drop before others not due to insect damage just the nature of the tree. The tilt test is effective but not until the last minute. Insects that like sugar begin to arrive such as wasps and beetles. There are so many i eat one and look at the seeds color. In addition to all that it ripens early summer so i use other easy to pick pears as indicators.

Your’s is my experience with my Ubileen that is starting to have substantial crops.

If I wait until I can “tip” them off the tree and until they have that blush they have in the Jung catalog picture, they ripen so fast I don’t know how to manage them.

You can’t tell they are ready (or even overripe as in your picture) by feel, even pushing on the stem end. When they are solid green, they are not ready, but if you leave them out that they start turning yellow, there is this very narrow window between a perfect pear and another blob to toss on the compost heap.

Hi, I got some scions for your pear from @mamuang this year and grafted them onto 3 different trees and they are growing like weeds and they took very quickly. One week after grafting I saw action but was wondering if it was only the built up energy in the scion. But, by week 3, I was sure they took.

So after that long winded lead-in. Since they don’t store well, how do they process for longer term storage.

Your’s is my experience with my Ubileen that is starting to have substantial crops.
…
there is this very narrow window between a perfect pear and another blob to toss on the compost heap

This year I found a way to identify when fruit is ripe…when it disappears from the trees. Every time I sample fruit, it is under-ripe. When I go back in a few days or a week, there is nothing left. So, either the animals can tell exactly when it is ripe, or they don’t really care if it is fully ripe.

I guess between the two of us, we don’t have a solution to the Ubileen pear harvest problem, but least we both know that we are not alone in Ubileen being hard to time.

A few years back I attended a workshop by a grower who had a grant to test different kinds of berries as possible crops in our area – currants, gooseberries, aronia and others. I asked about my failure to get kiwi vines started, and he responded, “Don’t believe everything they tell you in the plant-and-seed catalogs. Not everything they say you can grow in our climate zone grows here.”

I am wondering if the Ubileen is something that the catalogs talk up but the reality of it is a different story?

Are you ready for my apple joke? There is an enormous apple tree next to the Physics building on the University of Wisconsin-Madison campus, in the garden behind Chamberlain Hall near the intersection of Charter and University Avenue. A sign explains this tree was given to the University by Congressman Jim Sensenbrenner, who in turn received it as a gift from the NIST Federal agency in recognition of Mr. Sensenbrenner leading the Commerce Committee funding their work on science. This tree is said to be grafted from the apple tree that was the inspiration for Isaac Newton’s Theory of Gravity.

I have wanted to taste this variety of apple, their is often good fruit set in the spring, but come fall I can’t find any on the tree. This variety certainly must not be popular with commercial growers – those apples drop (bah-doom boom!).

They store very well either dried or canned. They are best eaten fresh. They have a unique undescribable pear taste unique to them on the best years that really stands out. They will not have that flavor the first 2 years or so they bear fruit and you will think the fruit nearly worthless. They are very valuable as an interstem. Expect nearly 100% take rate on grafts.

That 100% take rate on that small yellow pear comes in handy because it goes both ways grafting it to any pear tree or grafting another pear to it.