Strange because I have heard they are good. Where did you purchase yours? As stated above I know taste can vary, so maybe the cloning stock is poor. Or maybe they need a drier climate like Vegas!

Drew, I was just thinking that it may have to do with my conditions. I really doubt that it is mislabeled, as it is spot on in terms of dwarfing. I got it from Whitman farms, which speaks highly of the flavor.

Here’s a pic of my tree. Right behind it, covered in white (Surround) is a Crimson Passion bush cherry. If you’ve been following the Romance Sersies thread, you may recognize the CP from it. It is planted in a fairly moist and water retentive (though well drained) place. For scale, the fence is a bit over 4’.

I did prune it back quite a bit last summer, as it was blocking my wheelbarrow from moving down the aisle. But it has never been much (if any) taller than it is now- it was just growing out horizontally. 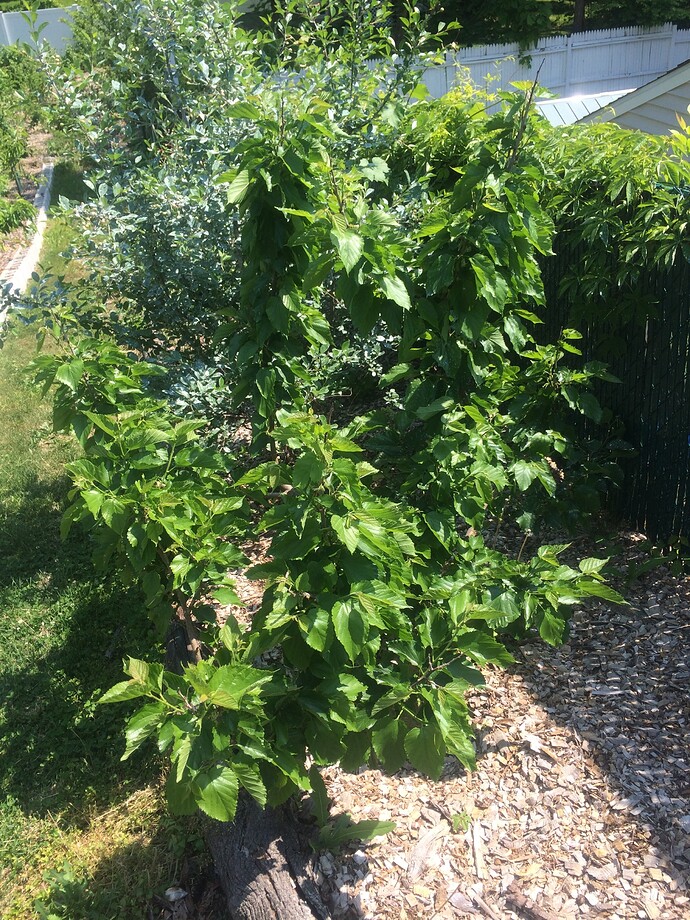 Kokuso is better than any wild mulberry I have tried.

That is good to hear- I just grafted a bunch of Kokuso onto a wild mulberry growing by the road. I also added a few Oscars. I also tossed a Kokuso onto the Gerardi.

I’m not sure how well I’ll do on these grafts- the only mulberry grafting I’ve done was 1/3 last year, with Illinois Everbearing onto the same wild bush/tree.

Here’s what the graft looks like after a year- I’ve circled both the IE leaves (almost circular) and the rootstock (multiple lobes). Both the rootstock and the IE have fruit, thought he RS’s fruit is much smaller. 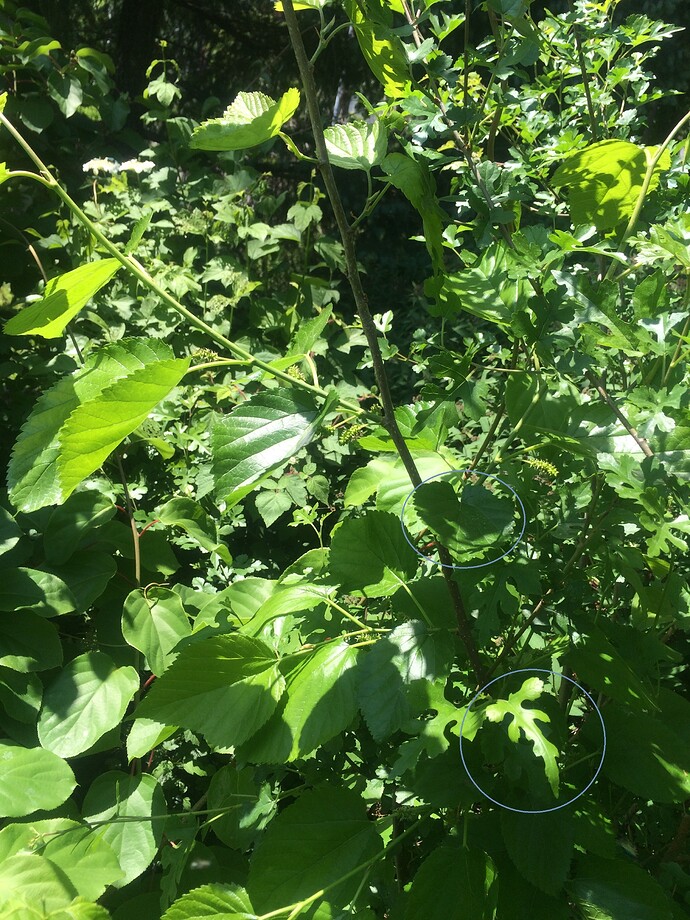 The kokuso looks a lot like IE and both have big leaves (possibly due to Red mulberry heritage?). The Oscar is somewhere between the IE and the rootstock in terms of leaf shape and has smaller leaves (100% white mulberry?).

Here is a good page for distinguishing Red vs White mulberries.

Drew, I was just thinking that it may have to do with my conditions. I really doubt that it is mislabeled

I didn’t mean mislabeled just cloning lines. Like say the original source for Whitman was ARS, but raintree imported one and use that for propagation, both the same cultivar but way different cloning lines and probably do not taste the same. Mulberries, the same cultivar can taste different tree to tree, unless exact clones. Usually cultivars are exact clones though, so unlikely I’m correct. As you said probably depends where grown. Sounds like not a winner here either. Thanks for the tip!

Sounds like not a winner here either. Thanks for the tip!

I’m actually thinking about grafting the Gerardi onto the Kokuso next year to see if a dryer area of the yard will work better for it. Eventually all my trees will have everything on them…

Regrettably, none of my mulberries are in too dry an area, except a black mulberry (Persian Black), which has spent the last 3 years in a fabric pot.

I agree that mulberry are a good addition to backyard orchards and homesteads for fruit and livestock forage. Growing up in Chicago, I remember grazing off trees that graced many yards and alleys…now trying to get some to grow for me here in Maine.
I tried a few different grafting strategies with mulberries this spring; topworked some 3 year seedling rubra with veneer grafts, benchgrafted with ‘z-graft’, and due to a lack of rootstock I tried grafting roots directly onto scions. These are all starting to bud out.
Also trying to root dormant cuttings!
One thing I learned at Mofga Scionwood Swap event was that ‘contorted mulberry’ is very easily rooted and can be used as an understock grafted to harder to root varieties.
IE, Collier, Kokuso, Oscar are the varieties I’m working with.
Planted out quite a few seedlings into nursery rows for next year, too!

Hi Alan, jujubes and figs are also like mulberries, bearing flowers and fruit on shoots developed during spring(or even summer of the same year), and not dependent on last year’s growth.
mulberries, figs(and perhaps other fig family members such as che), just like the unrelated juju’s–they are some of the few deciduous fruit trees which will persevere against late frosts, by bearing flowers and fruits in succession from spring to summer, or even early fall. Apples and peaches are sadly not wise to frost, and not as efficient nor accommodating to the fruit farmer, since these drupes and pomes bear in lump sum fashion in spring-- and if the trigger gets tripped by freezing weather, the trees are rendered practically useless for the rest of the year, and again subject to a ‘what-if’ scenario: in the hopes that a late frost does not occur when flowers emerge the following year.

Hi Alan, jujubes and figs are also like mulberries, bearing flowers and fruit on shoots developed during spring(or even summer of the same year), and not dependent on last year’s growth.

J, I didn’t think of figs even though I grow them. They actually provide figs started the previous year (brebas) as well as the main crop that comes from this years wood. Mulberries are amazing how they get it all done so quickly.

YMMV.
Illinois Everbearing is the gold standard here - currently harvesting beaucoup berries - with good sweet/tart balance.
Had Collier years ago, but lost it; Alan sent me scions to get it re-started.
Wellington, which gets rave reviews in some places, is a dog here - really trashy growth habit, lots of die-back, sparse fruit production.
Stearns is good! My trees are young and not yet bearing heavily - and I’ve had trouble getting them up above deer browse height - 6’ tree tubes were necessary.
IN growers I know swear by David Smith Everbearing, but right now all I have is a single branch of that variety in another tree.
Kokuso (several branches worked into a M.alba on the fenceline) is bearing a good crop this year… big, lavender berries - they just don’t go full black; a bit bland… I was a little disappointed.
Have a local hybrid, Lawson Dawson, that bears good crops every year, nice berries with good flavor.
Never met a female M.rubra that I didn’t like. Had a really good one that I selected from Alabama, ‘Dumpster Delight’, which I’ve now lost - and when I visited a month or so back, the ortet was dead.
Have grafted Geraldi 2 or 3 times in the past… just never could get it going.
Have seen some weeping cultivars that produced some pretty good berries, but the one I got from Edible Landscaping, years ago, was, as they say here, ‘not much punkin’.

Performance of varieties will vary from place to place. Have a buddy in Flint MI who says IE is crap in his orchard, and sent me his favorite, an unknown variety he’d purchased as ‘Pakistan’ - but wasn’t. It was just…average, at best, here.

Popcorn disease has shown up on the IE fruits the last few years - and I’m seeing quite a bit this year, but still getting plenty of berries. IIRC, only M.alba and the M.albaXrubra hybrids are susceptible.

Had departed friend who was an Army medic…spent some time in India/Pakistan… said he saw lots of broken limbs (on humans) during mulberry season - from folks falling out of trees while picking &/or shaking out fruits.

Clark, thank you for reminding us how good mulberries can be!

I have a 5 year old Illinois Everbearing. This year looks like a great crop. I like standing by the tree eating the berries immediately after picking them!

When do they ripen here? I’d love to taste them. I have a couple of sad morus nigra cultivars and have been debating putting in an Illinois Everbearing. I’d planted a Silk Hope because I’d heard it was very similar to, but better than IE, but it succumbed after being eaten by deer twice.

“When do they ripen here?”
Murky, I think mid to late June, until Sept. That is for Illinois Everbearing. This photo is from July last year.

“I’d love to taste them.”
I can help you with that. 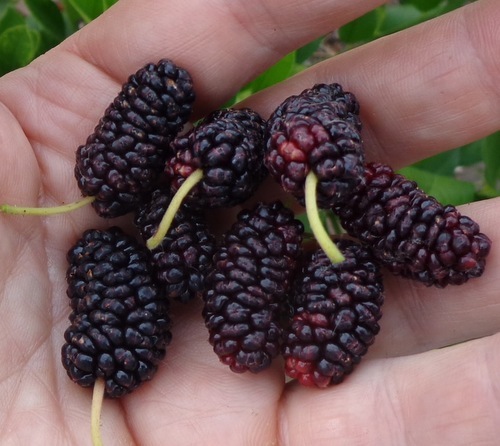 Are they abuzz with Spotted Wing Drosophila beginning in August?

No insects on them here. At least, as far as I know. I do have to net the tree because birds love them.

IEB is a forage tree for me. I wouldn’t think of netting them from birds, I can still eat my fill when I feel like them, but I can see how those who use them as a fruit staple would need to. Seems as though a variety that ripens its fruit in a shorter window would make more sense for that, though.

They are also my trees for thinning out the squirrels before other fruit is attractive. Never bothers me to launch shotgun pellets into such a junk tree as a mulberry.

Kansas mulberries started ripening this week. Late May- July is the red mulberries season but the whites are still a month away. 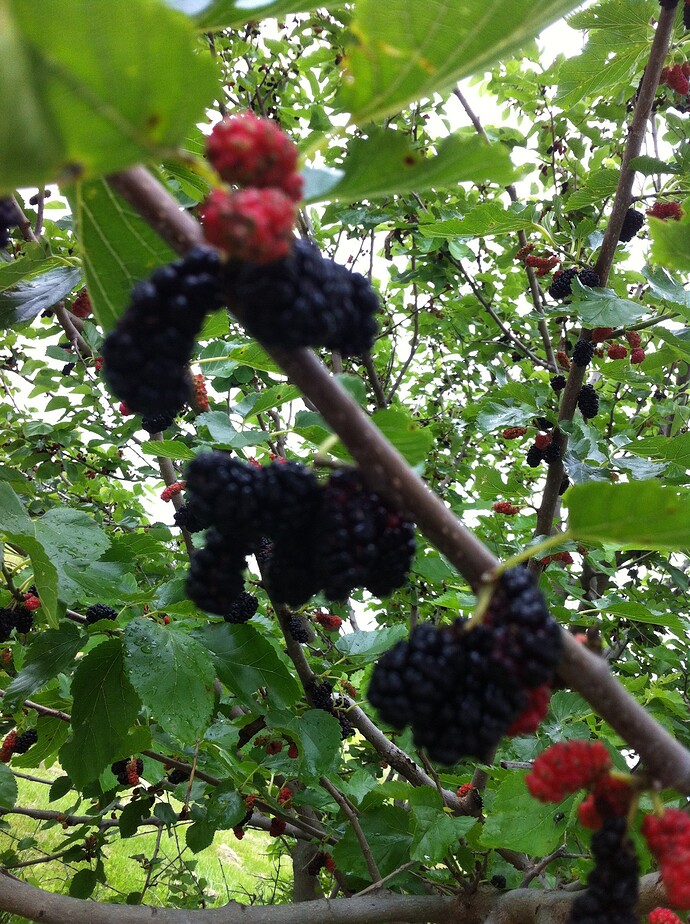 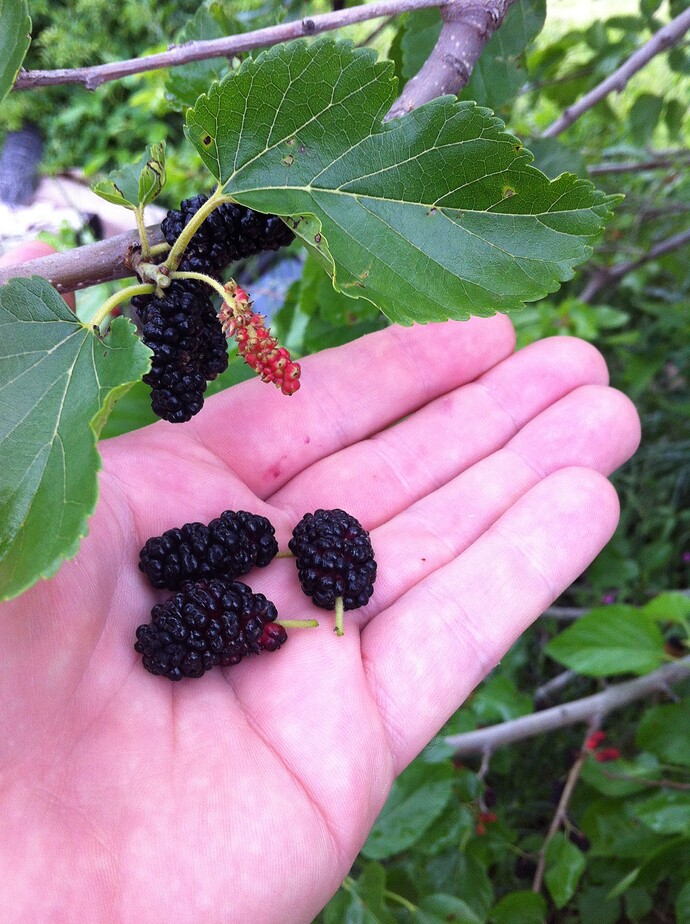 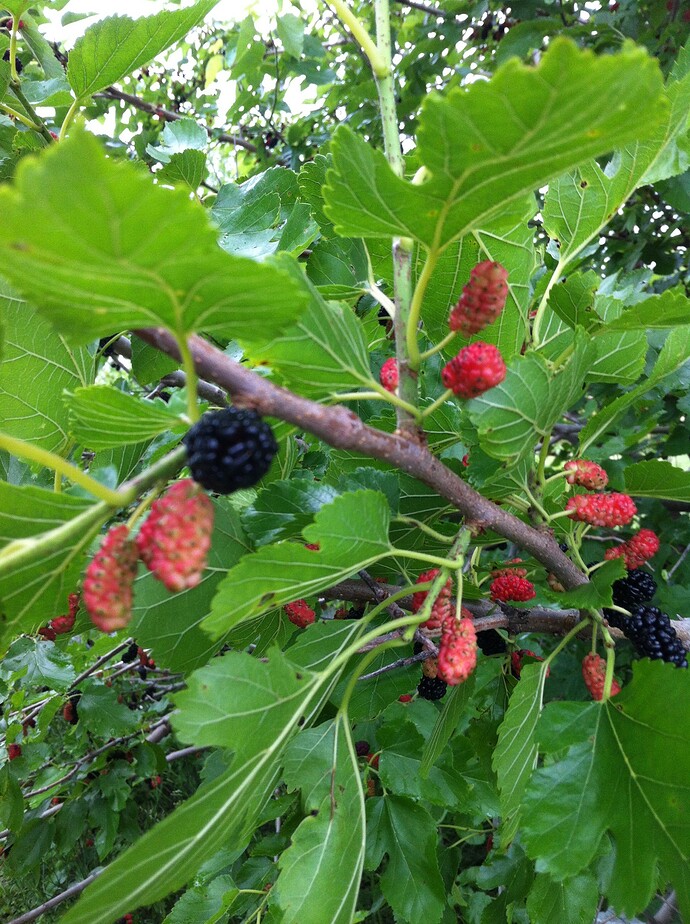 wow, such a generous berry.

Red Mulberries are so common here they are thought of as a Junk tree. The tend to take over unmanaged patches of land and grow very large. They make good fence post and are great for wild life. I want to try making mulberry wine and jam this year. I disagree about being insect free. If you soak the berries in water, you see a disgusting amount of bugs come to the surface. they also have seeping sap from borers and the bag worms love them.

Have have started to graft over a few Red Mulberries with David Smith Everbearing and will try Weeping Mulberry ornamental this year. What are the chances of a JuJube graft taking on Red mulberry?

What are the chances of a JuJube graft taking on Red mulberry?

haven’t tried it before. They may not be closely related, but they are the closest of juju relatives outside of the juju family, so never say never!

Does a Kokuso mulberry need to be grafted? or can it be rooted and planted in 5B?

Grafting it should work fine but wait until the rootstock is pushing growth. Never tried to root one before.

Kokuso #20 roots pretty easy compared to some Mulberry. I have assumed that the Kokuso #20 offered by USDA UC Davis is the Kokuso offered by nurseries, but the # 20 has always made we wonder. Does anyone know if they are the same? As far as 5b I could not say personally but a couple nurseries list it to zone 5 and very hardy.