What could possibly be better than mulberries for no work fruit? There is no need to spray them, they are drought and water tolerant. They tolerate hot and cold better than anything else I know. The best part is they are disease and insect tolerant. If there is better fruit I haven’t found it. 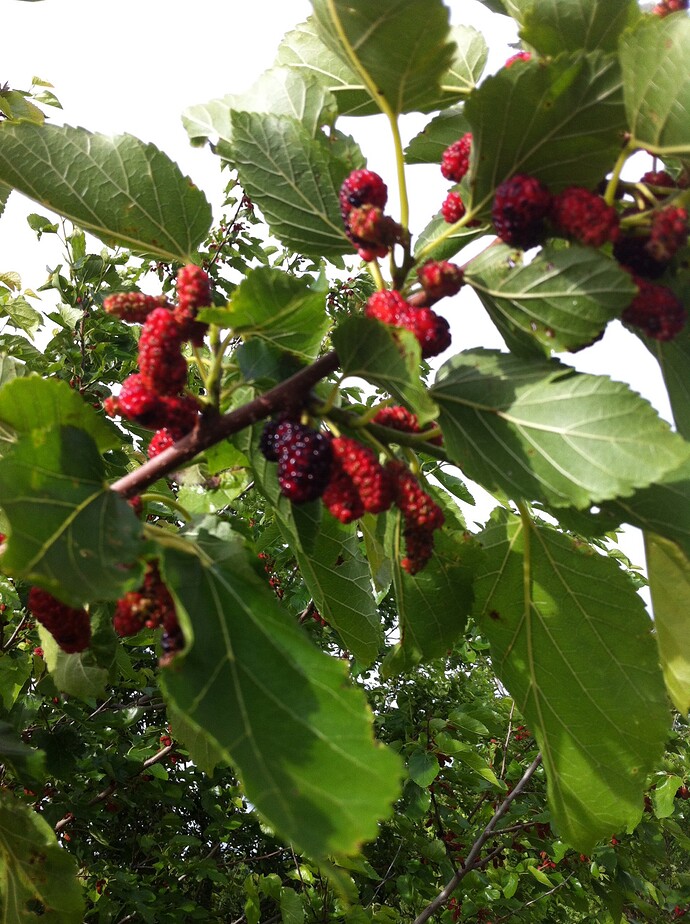 To me,the best part is eating them. 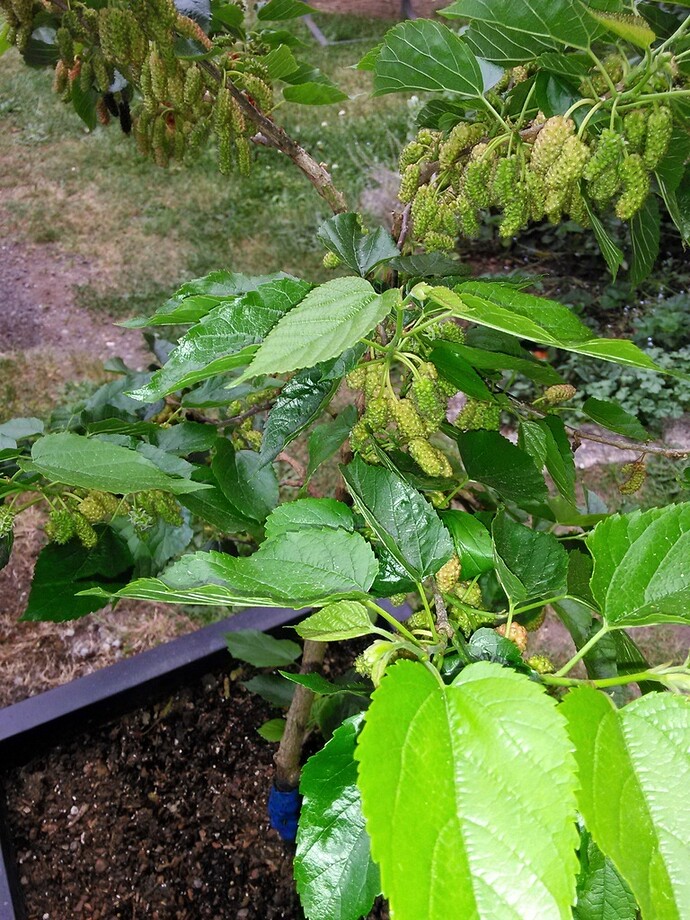 The crop on those branches is something, Brady. I haven’t grown mulberries; does one thin them?

I found the only mulberries that I have tried a bit overpowering. They were black (dried, actually) but I was still considering planting one on account of features Clark noted,. I was hoping to find a reliable description of cultivars to look through.
Is there one that you growers like?

I can recommend one to NOT get- Gerardi Dwarf. The fruit is pretty blah. It isn’t bad tasting, just not all that flavorful- I’ve had wild ones which tasted better. But, I can say that it really is dwarf, maybe 5’ tall, in year #5.

I also have two relatively young Oscar and Kokuso in an area that eventually won’t support mulberries (or at least without heavy pruning). Once I’ve had a chance to try them this year, I’ll decide which one should be grafted over the Gerardi. I’ll be interested to see if it continues to be dwarfing.

Edit (almost 4 years later): Gerardi has grown on me. On a per size basis, it is much more productive than other mulberries due to a smaller space between leaf nodes. I made a post where I listed the fruit per branch foot and Gerardi was 3X+ more than the others. I’m still not thrilled with the taste, but it isn’t bad and it is nice to have a mulberry which doesn’t grow 10+ feet per year.

Brady, I was saying that Gerardi are not strongly flavored. Are we talking about the same tree? There are at least a few spelling variations, as Whitman Farms says:
“Please note: the name of this tree is Gerardi; I have been calling it Giraldi because I misread my writing on the original tag.”

Girardi would be a 3rd variant.

I’ve sampled them for the last few years, but never had one which I thought was really good. Granted that the birds eat a lot of them, but I get a few…I’ll have to make an effort to protect them this year if there is some good potential.

Great, just what the mulberry newbie needs: Different character trees with the same name. Brady, I think, was reacting to my observation.
At least the Gerardi(s) seem like something for me to avoid one way or the other . . . .

The tree is probably the same one Bob.I barely get any,as the neighbor’s two year old has found them to his liking.I snack on them once in awhile.The one nice thing is the dwarfing feature and can be grown in a container.Brady

Both white and black fruited varieties are delicious and wild in this area. I prefer the black fruits which are hardier trees and better fruit. I leave a few males though it’s not necessary. Brady I must admit yours really grow a lot of fruit. They look fantastic! Since we have so many hybrids our whites sometimes are light purple colored fruit and the blacks have leaves that look more like whites. I suspect the blacks are actually part red mulberry. The fruits are about a half inch long and work great to side track the birds during cherry and juneberry season. Growing mulberries is a smart move for many of the above mentioned reasons but the best part is that they produce over a very long 6 week period.

Mulberries can be a bit of work if you are not growing a dwarfing one and wish to keep it in bounds. One day I will try pollarding a mulberry tree. They are the only fruit I know of that forms flowers and fruit on shoots formed that spring, which provides certain training opportunities not available in species that only bear fruit on last year’s growth or older.

Both what I’d call red (M. rubra) and white (M. alba) mulberries grow wild in my area, but they both commonly have black (or at least dark purple) fruit. If anything, I’d say the fruit of white mulberries is generally the darker of the two. I’ve only read about M. nigra black mulberries. I would say M. rubra generally has longer and skinnier fruit compared to M. alba’s relatively rounder fruits. In my experience, at least with wild specimens, M. alba tends toward good sweetness but bland, and M. rubra tends to have much better balance (acid?). I think M. alba has glossier, darker green leaves than M. rubra. M. rubra’s leaves also seem rougher to the touch and probably larger. M. rubra also seems to produce a lankier tree in comparison to M. alba, which at least in the juvenile/adolescent stages and grown in full sun seems bushier.

Clark, thank you for reminding us how good mulberries can be!

I have a 5 year old Illinois Everbearing. This year looks like a great crop. I like standing by the tree eating the berries immediately after picking them!

CousinFloyd,
Your descriptions sound very accurate and applicable to this area as well. I think our trees are red and whites crossed but there is no true black fruit in this area. If I recall correctly there are black fruited varieties that are very long fruits but grow in warmer climates only. One of the nice things about the white fruited varieties is no one knows you ate them. The purple hands make it obvious just what I’ve been snacking on :0)

could be i haven’t tried other good mulberries, or gerardi’s produce better-tasting fruit in las vegas( i see you’re growing yours in CT).
also glad to hear that yours grows as slowly as mine–as my gerardi has been giving me a complex re: my apparently not-so green thumb; relieved to know that mine are growing at about the same rate as the one you have, even though yours is being grown in milder,and more moist summers.

I don’t have much experience but my Kokuso is better than any wild mulberry I have tried. I have eaten many a wild “black” mulberry over the years and they all taste about the same. Kokuso is a notch better, I’m looking forward to a few years when it is producing a decent load. The only problem I had was the deer absolutely love mulberry leaves and have been doing a number on my tree. It is finally growing above their reach, it will be completely safe in a few weeks.

Does anyone have any experience starting mulberries with truncheons? I have a buddy with a few heavy producing native trees on his property.

… though Edible Landscaping of Virginia warns that some folks in Zone 7 have seen their mulberries suffer from “Popcorn Disease.”

Those wild ones make excellent jam I must say., I agree not that good fresh. Although I have nothing to compare with. All the wild ones are the same, but you know taste varies from tree to tree.

I can recommend one to NOT get- Gerardi Dwarf.

Strange because I have heard they are good. Where did you purchase yours? As stated above I know taste can vary, so maybe the cloning stock is poor. Or maybe they need a drier climate like Vegas!

sadly, the real black mulberries(morus nigra’s) cannot thrive in the northeast. Supposedly, the nigra’s are topnotch, but even where am at(southern nv), they are quite challenging to coax fruiting to maturity, or it could be just that my tiny 3-year old specimens are too young. Only alba’s(kokuso, gerardi, etc) and rubra’s are likely to grow wild in colder regions.
regardless, fruiting mulberries sure deserve a spot in anyone’s yard, being more fruitful than the typical berries(blackberries, etc), and reportedly even trumps the antioxidant activity of blueberries and blackberries: 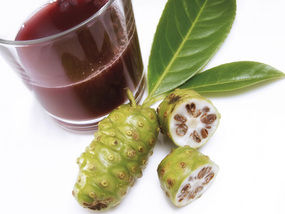 How mulberry juice can help shrink the wrinkles

BLUEBERRIES, blackberries and cranberries have all had their day in the sun, now the latest fruit to be hailed a superfood is the ­mulberry.

and the morus nigra mulberry costs 20$/lb, which should be enough incentive to grow if your locale permits:
http://m.independent.com/news/2007/jul/26/persian-mulberries/?templates=mobile