But I hated the resulting grape jam with the skins.

Thanks for sharing your experience with jam making. I am curious what exactly the difference was with the skins added that wasn’t pleasant. Was it the texture or the taste? Of course I know I can always try it myself but I’d rather learn from your experience than make a batch of yuck.

I like the skins of the improved varieties like Lane, and Black Beauty. If I make jam I will add them at least enough for a trial.

Muscadine skins are tricky. They make the jelly much more tart and add a thick chewy component. As Bill notes, some of the newer varieties are bred with thinner skins which are better for jelly. Higgins is usually in the parentage of varieties like this as it was a thin skinned variety.

Thanks for sharing your experience with jam making. I am curious what exactly the difference was with the skins added that wasn’t pleasant. Was it the texture or the taste? Of course I know I can always try it myself but I’d rather learn from your experience than make a batch of yuck.

It was texture and the taste that I did not like. These were concords so the thick, astringent skins remained in the jam. It may well be that cooking the grapes for a hour before adding pectin and then the sugar would have solved the problem with the tough astringent skins. As I mentioned in my last post I canned plum jam this year. Well, in doing so I brought the plums to a hard boil and then a hot simmer In order to get the pits out using a slotted spoon. That took about a hour for a full batch of around ten half pints. After getting most of the pits out I strained thru a kitchen mesh strainer to make sure that I had removed all of the pits. I noticed by that time the skins had dissolved (for the most part) into a paste. As I stated earlier, I was very pleased with the plum jam. In fact I was so pleased that I used up all of my empty jelly jars in making six batches of the plum jam after intending to can only one or two batches!

I’m thinking of using the same concept to make a batch of jam with some Cowart muscadines later on this year. My Concords will go into juice.

Oh by the way, I use Ball Low or No-Sugar or Needed Pectin. Using regular pectin with six cups of sugar was against the doctors orders. I’m borderline obese and don’t want to be worse.

Thanks for your response. Let us know how the next batches come out. Experience is the best teacher.

Experience is the best teacher.

Using common sense is important too.

Case in point - I was following a ladies advice off of Google where she wrote that she uses an electric hand mixer to tear apart her plums prior to boiling in order to remove the pits. Well I place my plums in my shallow pot that I use for cooking my jelly/jam, crank up the speed on the mixer to max and promptly splash splotches of plum juice over my stove and kitchen wall! Should have been using a much deeper pot. A potato masher is what I would recommend and use now.

But that mistake was not nearly as bad as boil overs which has happened to me more than once. That caused me to cuss for sure. Not only did I create a mess over and in my stove I lost nearly half of my prepared fruit. All the recipes has in it that after mixing in the sugar to bring the stuff to a full rolling boil that can not be stirred down for one minute. Well there is fine line between having a full rolling boil that cannot be stirred down and having a disastrous boil over! The only thing that one can do when it starts to boil over is to quickly grab the pot and lift it off of the burner. Turning off the burner and cussing does not help.

This is the 5 quart pot that I use for my jelly/ jam canning. It is probably from about the 1950’s. If you have one or can get ahold of one similar that would be ideal. 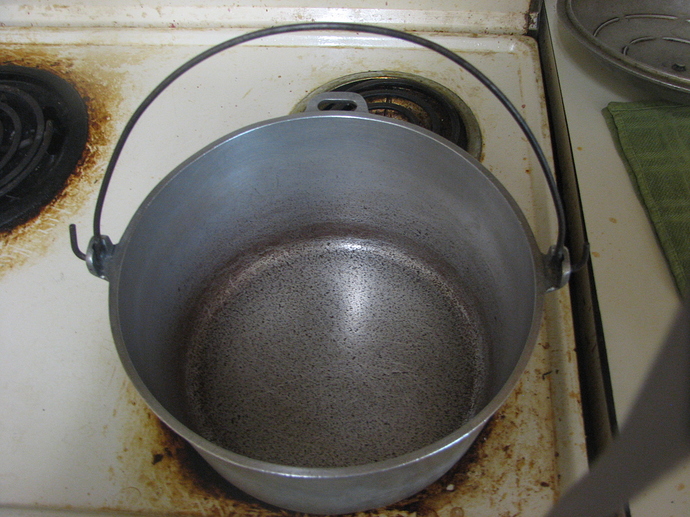 I recommend getting either a 10 or 12 quart pot similar to this one. Just don’t buy one that is pitted. This has a thick base that spreads heat evenly and helps prevent both burning and boil over. Please note that this is NOT a copper clad bottom!

Good condition but has heavy pitting on inside bottom. See Pictures. Kitchen technology changed in the mid 1980's with the introduction of the smooth glass cooktop surface. In 1986, Revere responded with the Tri-Ply or disc bottom.

I could never see the reason in using something that big for jelly/jam cooking. Takes 2 hands to lift it. Also cumbersome for ladling the jelly/jam out. Glad that it works for you though.

I could never see the reason in using something that big for jelly/jam cooking.

It never boils over.

And I have a water dipper to dip the jelly into jars.

It never boils over.

Here is what I use to ladle. The best I have ever used. Holds exactly a half pint. Did not know that it was called a water dipper though. Walmart I think. 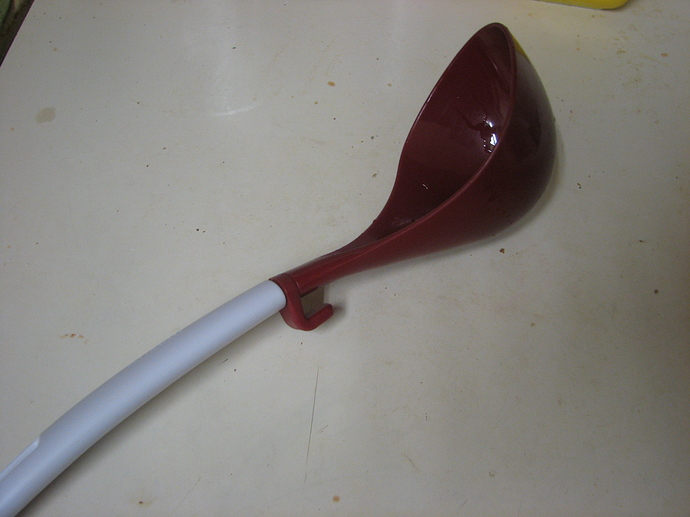 I go back far enough that I instantly knew what a water dipper was. My adult children would most likely refer to it as a ladle.

I instantly knew what a water dipper was.

Oh yes, but the water dipper was metal with a with a hook in the end that either hooked on the side of the bucket or on the well cover supports while that bucket was bringing the water up…and that was really good water! Especially when you drank it from the dipper!

What do you think about the condition of the base of my Darlene?
I’m afraid over time the mulch moved downslope and kind of covered this side of the trunk. I removed it a while ago.
I noticed the vine is not Quite as leafy as I Expect but most importantly the leaves seem to be in a constant state of slight droopiness. I hope it’s not rotten to a fatal level… 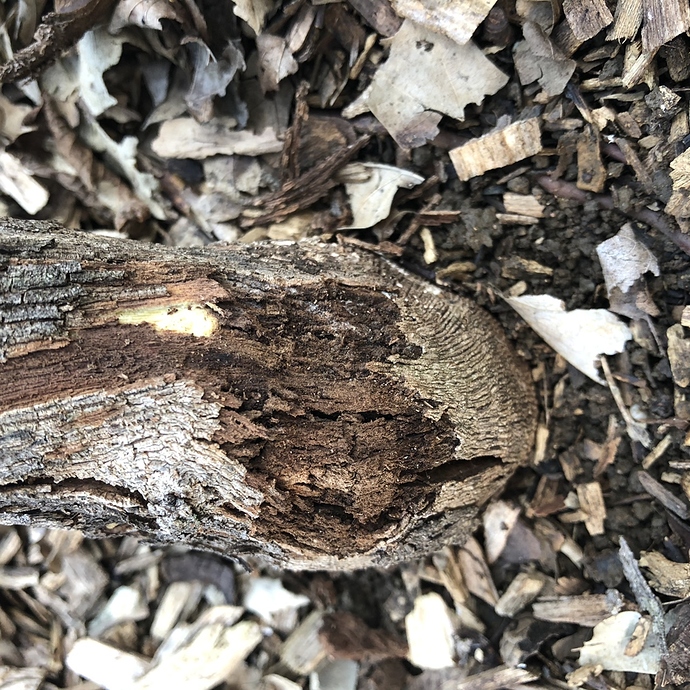 The trunk obviously has some issues and most likely it is causing the leaf droop. You could remove the dead area to see how much damage there is on the truck. If it were me I would start another vine about 3’ away and get it growing for a replacement. If the original vine fully recovers (I don’t think it will) you could keep it. I don’t grow Darlene and I understand that the grape is high quality. I would replace with a different variety just in case the issue is Darlene specific. Just my opinions.

Collar rot on a muscadine vine?

I have had what appeared to be collar rot at the base on apple trees that have killed them. Of course I don’t know whether it was that or maybe root rot or crown rot. These all come under a fungal organism called Phytophthora rot. It is caused by poorly draining soils.

Have you been watering your vine this year? That could cause soggy or wet soil conditions that could have lead to root rot.

I’m afraid over time the mulch moved downslope and kind of covered this side of the trunk.

I don’t know if the mulch caused the trunk problem but I keep it about 6" away.

Thanks y’all.
Man, I feel pretty stupid for allowing that to develop…i feel convinced it was the mulch contact with the trunk over a year or more. Self-inflicted wounds are the worst!
I have not been watering this vine…only a couple times the whole year and nothing that would result in that much damage so quickly.
I also didn’t realize how bad it was until i took those pictures. Neglect for the win!

It looks pretty heinous. The vine has fruit - maybe this will be its last hurrah.

On the flipside, it’s fun to now be shopping for a new vine

Per my previous comments here, Darlene was really sweet but just hasn’t produced much. It’s not really been a winner for me, especially considering I only have space for 2 vines - i need something more productive.

Man, I feel pretty stupid for allowing that to develop

Oh, its nothing to beat yourself up on. Whenever I do some dumb and mess up something, I just call it “Idiot tax”. And I do mess up plenty.

Btw, I see that you are in Tennessee. Where are you in TN? I’m just east of Memphis.

That is a classic example of cold damage to the trunk of a muscadine. Part of the stem is killed leaving a living layer. Am I correct that the damaged area is facing south toward the sun?