This is my Eureka. Third leaf for me…first fruits. I’ve been crossing my fingers and it’s looking like some fruit is going to hold this year. 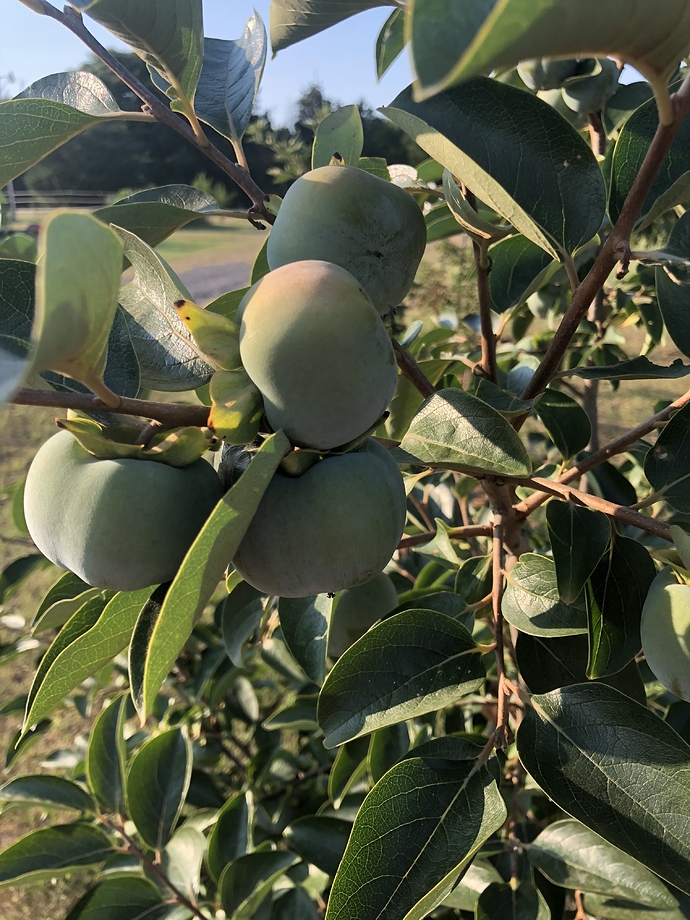 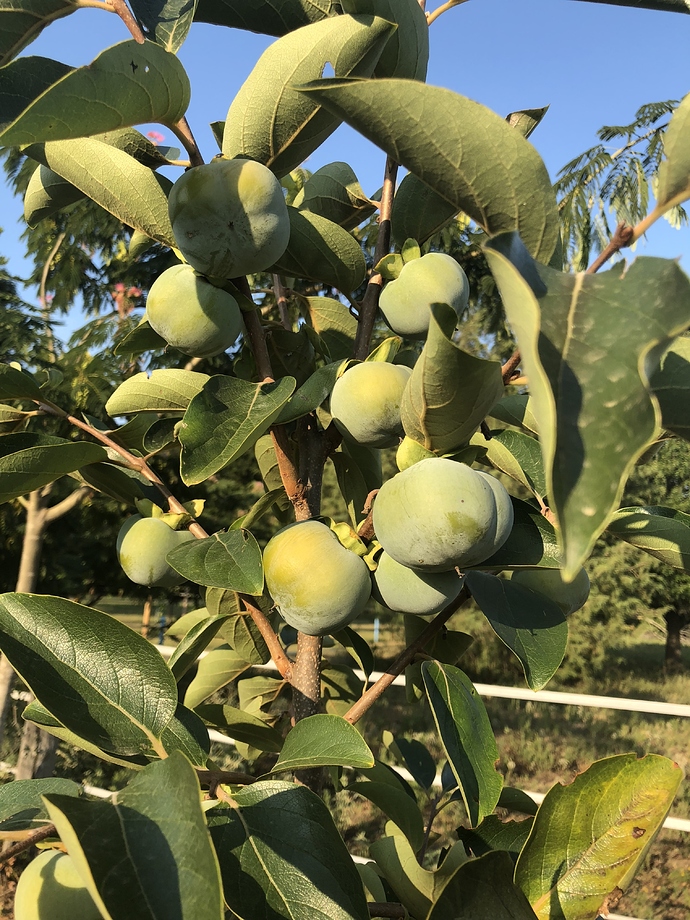 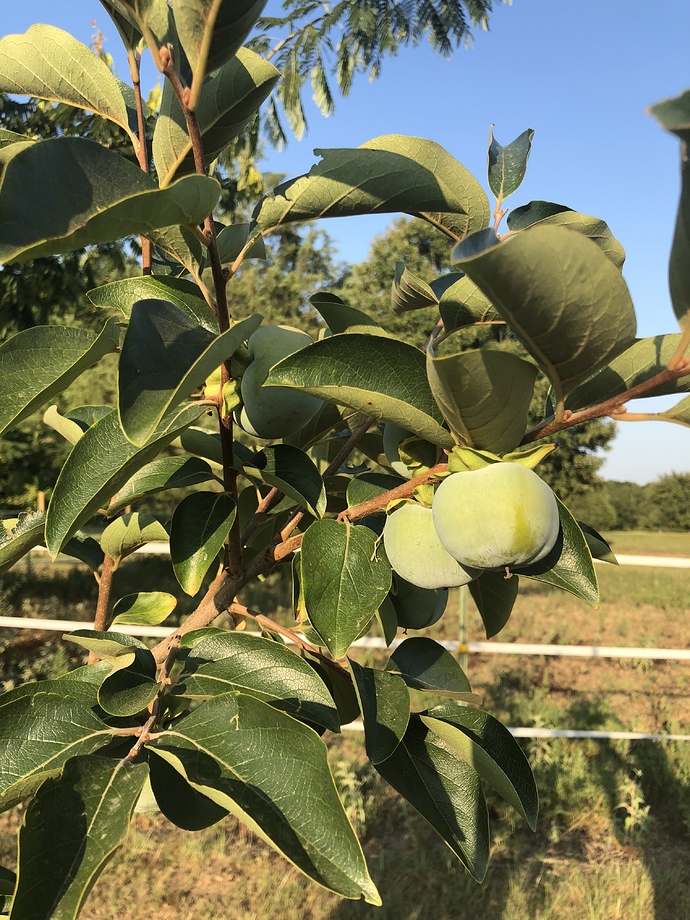 This is my Eureka. Third leaf for me…first fruits. I’ve been crossing my fingers and it’s looking like some fruit is going to hold this year.

My Eureka is about 12th leaf. Most reliable fruit tree I have except it’s very freeze sensitive after it starts growing in spring. Still with some protection it fruits every yr with no pests and little bird damage. High quality fruit. I dry most.

Mine does look bad, curled leaves. I guess from the heat and low water. Doesn’t seem to hurt the fruit.

I’ve been really sparse with the water on this one because it would drop fruit. It’s leaves look a little better now but have been curling some. We need rain badly.

I remember you saying you dried yours. How do you do it? Slice them and use dehydrator? I’m excited because other than a couple of store bought fuyus I haven’t had persimmons for years.

I let them soften some by putting a ripe apple in with them in say a cardboard box. That gets a bunch soft at once. Then slice and dry. I like the taste and apperance much better that way than slicing them up while still hard. The dried soft fruit has a beautiful translucent orange color.

Here’s pictures of my plant. Looks like a case of severe abuse…!! I’ve actually been watering regularly. 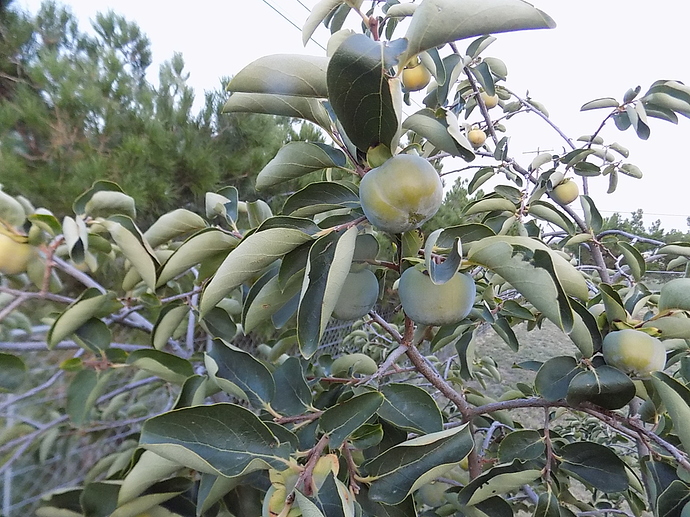 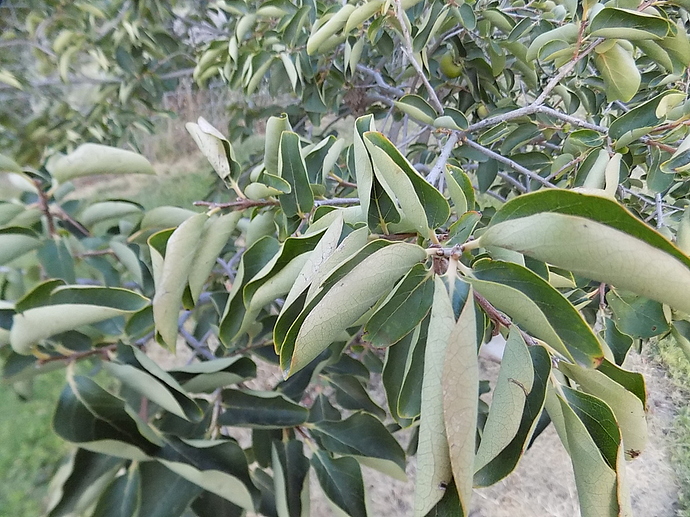 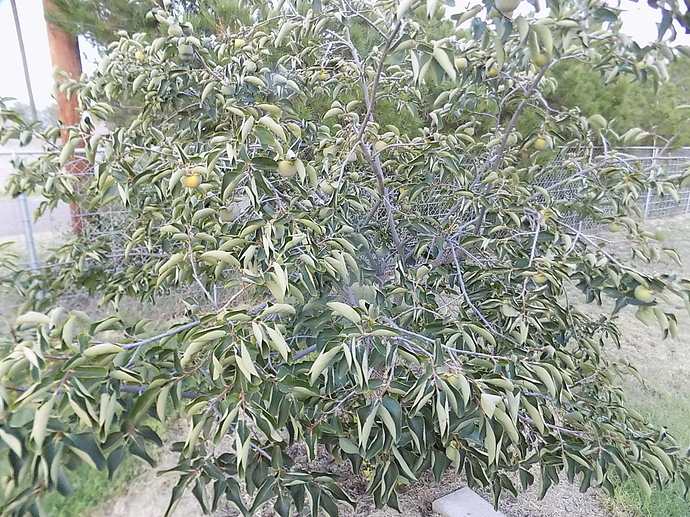 @fruitnut some of my apple trees look that kind of abused…curled leaves. Sprinkler placement in the orchard isn’t ideal.

Looks good…my fruit seem about on par—maybe a bit behind.

People would have to live here to know what’s its like…I’m just trying to keep my plants alive and that takes daily watering.

I’m going to try the drying. I’ve never eaten much of anything but wild American that were small and full of seeds and must be almost mushy to prevent the pucker. I did buy a couple of fuyus. I ate one and it was just okay but I put one up and forgot about it. When I found it three weeks later it was soft and much better. Still wasn’t like the wild persimmons though.

We had a big persimmon tree here we removed to plant the stone fruit orchard. They had to be mush to be edible, and the looks on the faces of those few brave “ijuts” trying them too early cured me of wanting to taste them. I sampled one once that was ok.

Last year I bought a large fruit labeled Hachiya at the store that was sweet and tasty.

I need to figure out what to plant here. I can plant one fairly long row of persimmons…and have many to choose from. We need to keep some grass for the milk makers and lamb chops on the hoof!

Eureka is not a variety I have even heard of… but the same goes for some I grafted this year. Share a tasting report when you get to eat some!

I will. I have grafted some this year that are doing well so I hope to have more in years to come. In doing research Eureka was recommended by Texas A&M as the best for Texas commercially. It just so happens that a local nursery carries it. I have since been asked where it could be found and I didn’t realize that it wasn’t that common. It is an Asian persimmon but is astringent.

I have been one of those “ijuts” before but not on purpose. It would be sooo tempting to try them before they were ready. Everyone always said let the frost hit them first. Think alum… same thing. Lovely experience… 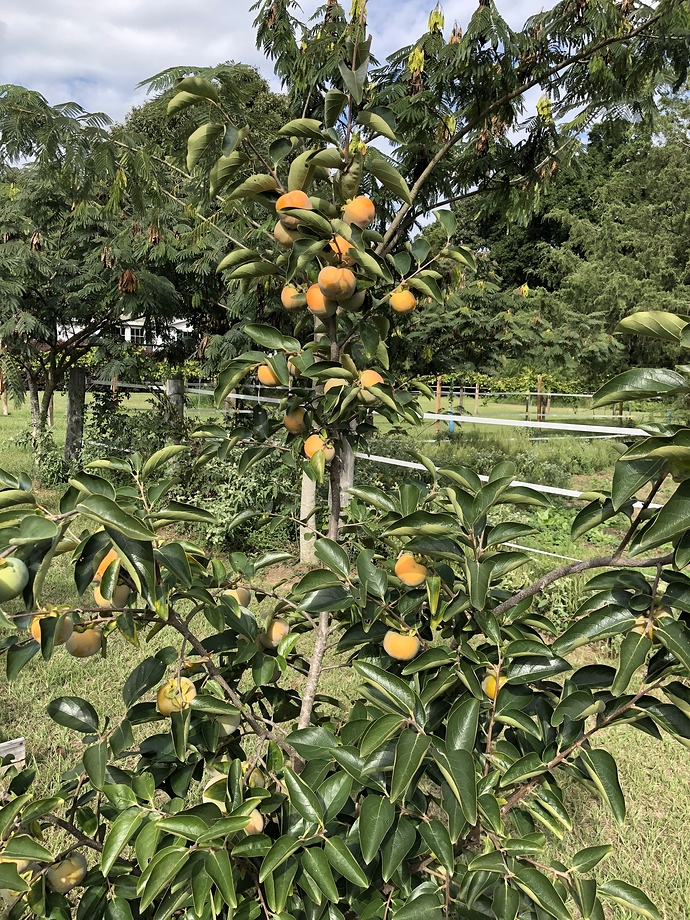 looking good and sizing up well! I sooo love 'simmons!

btw, tried to grow some fuyus here but fruits continue to be tiny and thick-skinned, perhaps due to our spartan, darwinistic fruit-growing, lol

I’m right there with you! Picked my very first persimmons yesterday! 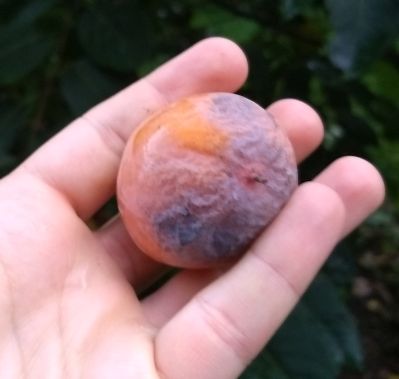 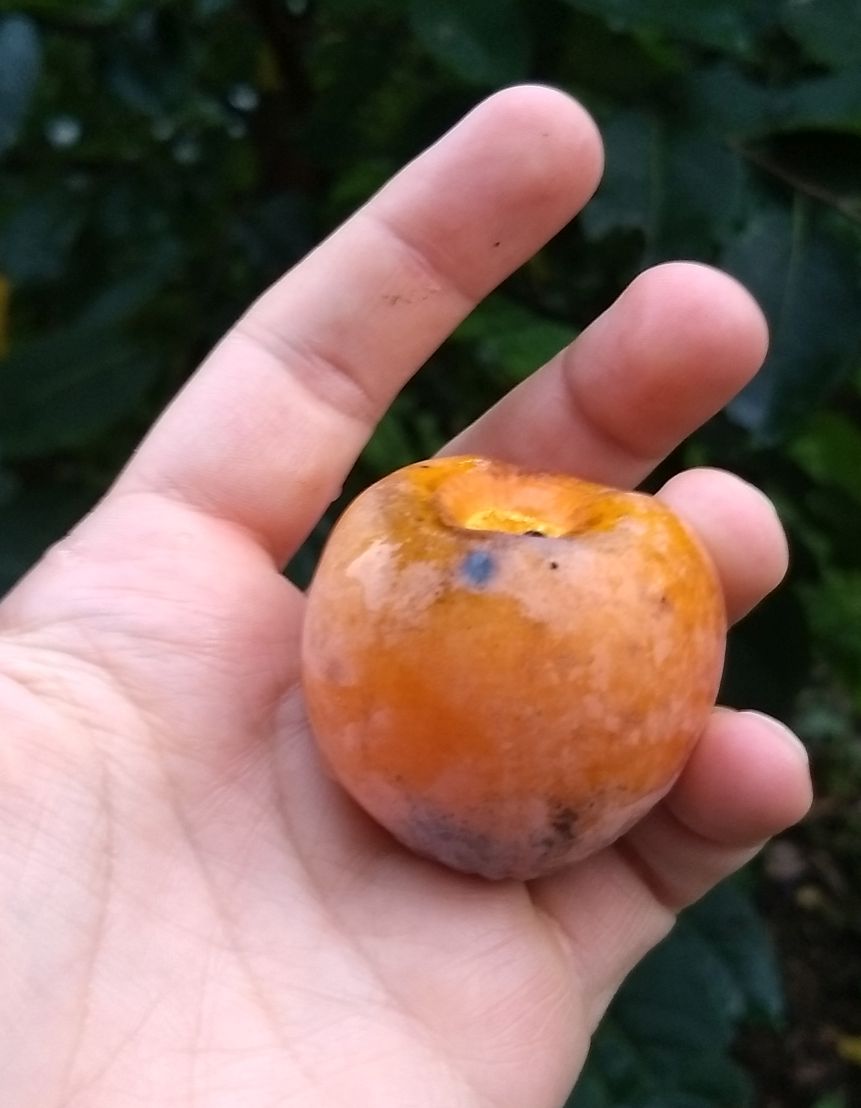 It was very good. Had that “spicy” American persimmon taste I was hoping for. Also had seeds. There are maybe 3 other fruits on the tree.

And on the same day, Rosseyanka Asian-American hybrid! 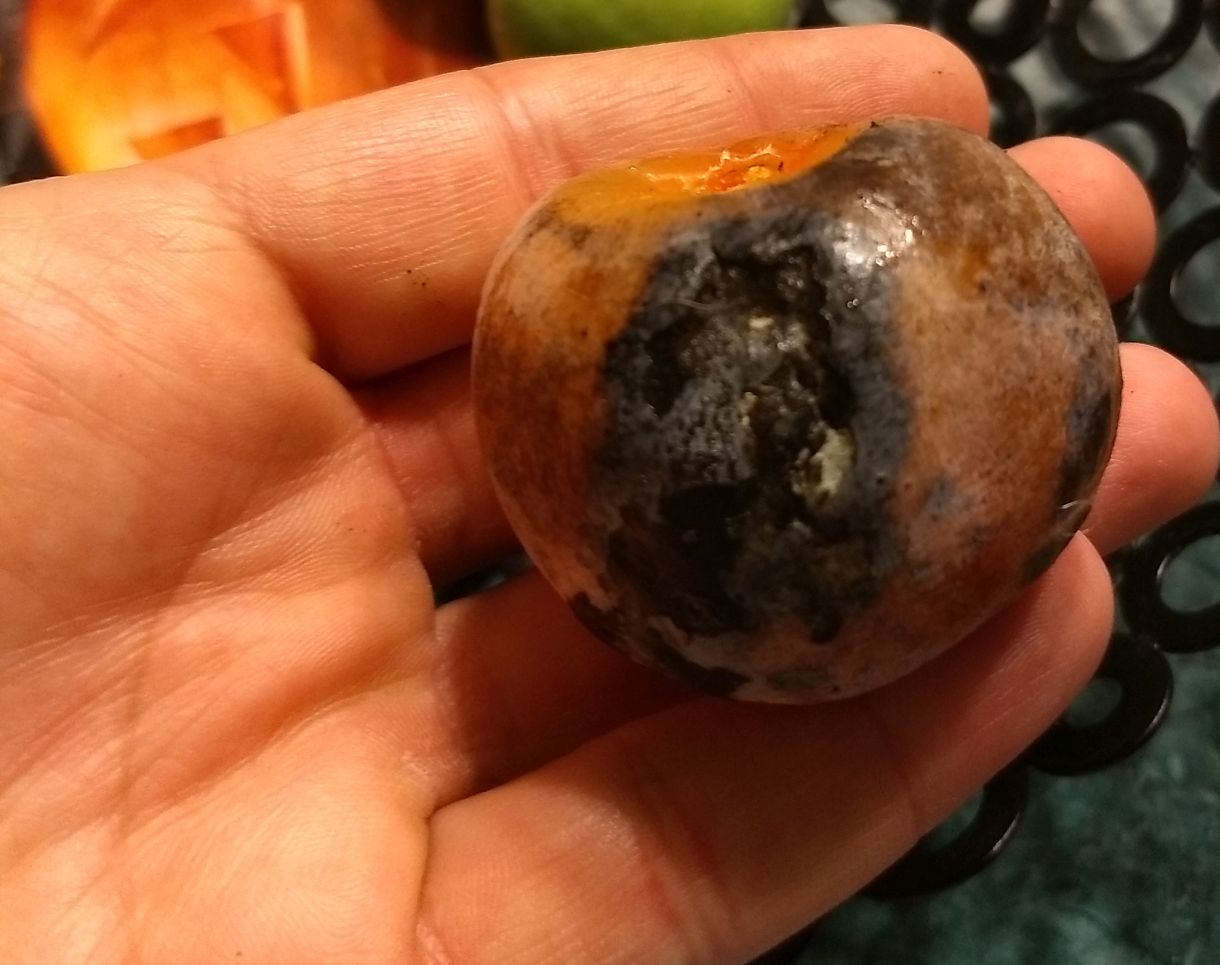 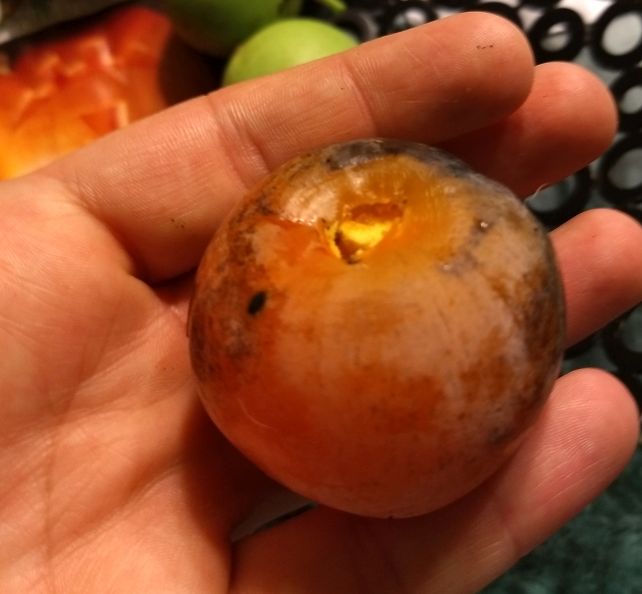 This one was lacking in flavor, but it’s the very first fruit from the tree, so I’m hoping that’s a fluke, especially because there are a lot more still ripening. Seedless.

Do you have a hermaphrodite cultivar and/or live in an area with male persimmons? Trying to figure out why your American has seeds. It’s surprising also your Rosseyanka is seedless. Doesn’t quite match up, Tim.

There do exist persimmons in the wild here, but I’ve never found any near my house. None of the other trees I’ve planted have reached flowering stage yet.

I was kind of wondering if my Rosey is really a Rosey. I don’t know what they’re really supposed to look or taste like.

Doesn’t look like Rosseyanka fruit to me…looks more like another D.v…and here, its usually not ripe until well into Nov.- but everything is early here this year, and I had to regraft Rossey this spring, so no fruits this year

Whatever it is, it’s my best-growing persimmon tree. If the fruit doesn’t flavor up in coming years, it’ll be a good graft recipient. But I would like to know so that I can get a real hybrid if needed.

I had the first few Prok persimmons this year from a recent graft. They ripened a few weeks ago. My Rosseyanka persimmons are starting to ripen, but it looks like the first to ripen is still at least two or three weeks off, maybe longer than that. It’s the first year for that tree to fruit, too. It’s an older, purchased tree, but it’s grown very slowly. I visited Edible Landscaping in Virginia in early December, and the Rosseyankas weren’t yet fully ripe then.

Although I sometimes see surface spots on healthy persimmons similar to the large black spot on your Rosseyanka, that spot makes me wonder if it ripened prematurely because something was wrong with it, and that’s why it didn’t have much taste.

I hope you’re right. This one did seem to have ripened much faster than its siblings. Certainly I’m not going to judge the tree by its first-fruits.

(As it happens, Edible Landscaping is where I got this tree from.)

I wouldn’t know how to describe the difference without looking at the trees, but I think the leaves and growth habit of Rosseyanka are different from full-native persimmons, so that might be another way you could get a better idea whether your tree is in fact what it’s supposed to be.

I’ve since gotten three more fruit from the Rosseyanka, and they were much better. Also tasted more in line with what I expect a kaki with a hint of virginiana to taste like. All seedless.

My second Prok had seeds, but it sure is tasty.