I just put together a map of my fruit trees. All fruit has been planted in my yard which is just over an acre. Almost everything shown is currently in the ground. The Arkansas Black, Stayman Winesap, Li jujube and Korean Giant pear arrived yesterday and will be planted this afternoon. Most of the trees were planted last year. I have about 6 yards of mulch that I will be distributing tomorrow.

I currently have 2 pomegranates in-ground. The other 4, along with the figs will be planted after the last frost. In the empty eastern corner I am planning to add some raspberries, an olive and some more Asian persimmons. North of the pears and blackberries I will be putting in a couple feijoa and I’ll be squeezing in a few blueberry bushes somewhere this year as well, probably along the fence near the gojis. 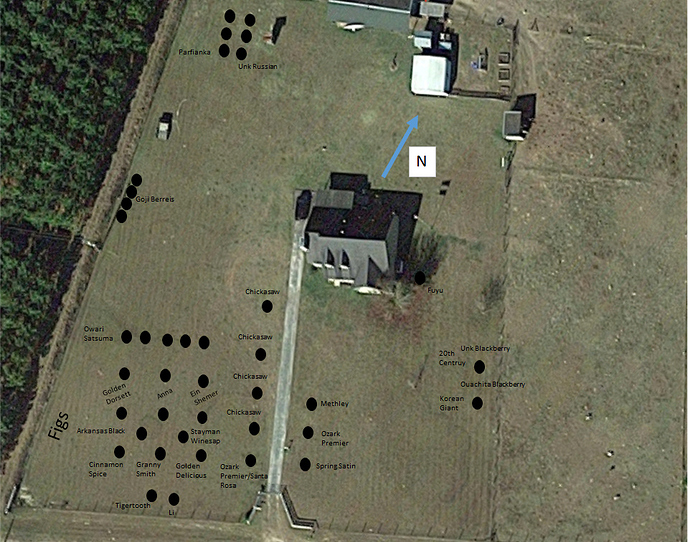 Looks like a nice set up. Good luck with the new trees.

You’re on your way to filling up you’re land. Good spacing.

Thanks. My wife has agreed to anything I want to plant as long as it is landscaped presentably and I leave some open areas for our kid (and future kids) to play. I just get her approval before digging any holes.

And, welcome to the forum. @coolmantoole is on the here, who is probably not too far from you, he’s a fan of pears, among other things.

Cool layout! Note, few raspberries can take our climate. There is one variety that works. I was just given some by the horticulturalist at the Georgia Southern Botanic Garden. He has pull some out every year. I can get you some if you want it. I have no idea what the variety is, but it’s doing great in Statesboro GA which is better than what you can usually hope for with a raspberry around here. I have added blackberries to my orchard, and generally I would recommend them over raspberries.

I have a Korean Giant that has been in the ground one year. I’ve not found the other late blooming Asian types disease resistant for here. I’m trying Olton Brouzard, Scarlet and Tennsoui which I hope will overlap bloom time some with Korean Giant. Finding a sufficiently fire blight resistant pear that blooms with Korean Giant may be the hardest part of growing it.

Which figs do you have? I like some way more than others. I’m propagating my green strawberry type fig again this year. I will have babies soon if you want one. Thanks and God bless.

Thanks! I was going to order a variety called Amity Red sold by Stark Bros. They claim it is good up to zone 9. If you have a proven variety though I’d definitely be interested.

Does 20th Century not bloom at the same time as Korean giant?

I’ve started several varieties of figs this year. I have rooted cuttings of violette de bordeax, ronde de Bordeaux, Smith, longue d’Aout, Godfather, atreano, long yellow, sweet joy, sweet Diana and a couple others I can’t recall right now and several others I managed to kill. I also have brown turkey, LSU purple and lemon in pots that will be planted in a few weeks. I also have a potted green Ischia which is probably similar to your green strawberry fig. My dogs snatched it out of the pot so the jury is out on whether it will make it so I may take you up on your offer. I have multiples of most of the varieties that I successfully started and you’re welcome to any of the varieties with duplicates. Looks like I’m going to have several Smith which are reputed to be an excellent variety that excels in the southeast.

Nothing I’ve read about 20th Century makes me think that it’s really fireblight resistant enough from here, and more importantly, it requires about 800 chilling hours. We haven’t gotten 800 chilling hours since 2014, and I imagine you get fewer in Guyton than we get here in Statesboro.

I would not trust a Stark Brother’s claim that something is good to Zone 9 without some anecdotal backup from someone in the region. Just Fruits has two red varieties, and I trust theirs more. That said when it comes to raspberries, they are so extremely marginal for our climate that growing locally and doing OK is worth more than a dubious claim from a nursery. The only thing is, the garden got their berries informally from somebody. So who knows what the variety is or if it is even one that’s commercially available at all?

I have a smith that has barely grown four inches in three years. I’m actually pulling some figs out to make space for Chickasaw plums. My green one may be Green Ischia. It’s kind of a mystery. I bought it from Just Fruits. It was supposed to be a black fig called Nero. It’s a green fig with red pulp. It may or may not be Green Ischia, but I don’t know what it is if it isn’t. Green Ischia is supposed to be a slow grower. This tree is my most aggressive growing fig, so I don’t know what it is.

The 20th Century was a gift. I planted it in Dec '17 and it set about 25 fruits. I pulled all but 3 and got to eat one of those. I hope it is productive because that one fruit was delicious. I’ll have to see how it does with FB. No sign of disease last year. It got a dose of copper and neem the other day.

I haven’t been into figs long but I count myself among the “lumpers.” I think all the Adriatic types with green skin and red pulp are probably pretty close to the same thing.

For raspberries dorman red is recommended for the south. Itsaul and bababerry have good reports of dealing with heat and humidity. Mysore raspberry grows well in Florida not sure if 8b is too cold it’s not a hardy type.