I just hope the cherries make it. I did try to graft a couple scions of them to a sour cherry but ai have read that that may not work so hopefully the cuttings or the seeds I planted at least will work.

I wish I could send you some cardboard. There’s a hardware store behind my house that has two dumpsters full of cardboard. Also found a 100ft hose and a wrench set that they tossed in the garbage.
One of the last raised beds I made like yours and placed on top of the ground and put cardboard down. Much easier and the result is the same or better.

It’s the thought that counts @TangTang

The hose was a return and the return tag said it has holes. Hooked it up and definitely no holes. The wrench set was missing one wrench (shoplifter?) so I guess they just toss those. Made my wife’s week to find those!

Update on my apple sprouts. They are coming up nicely

and now another one has popped up in another container! 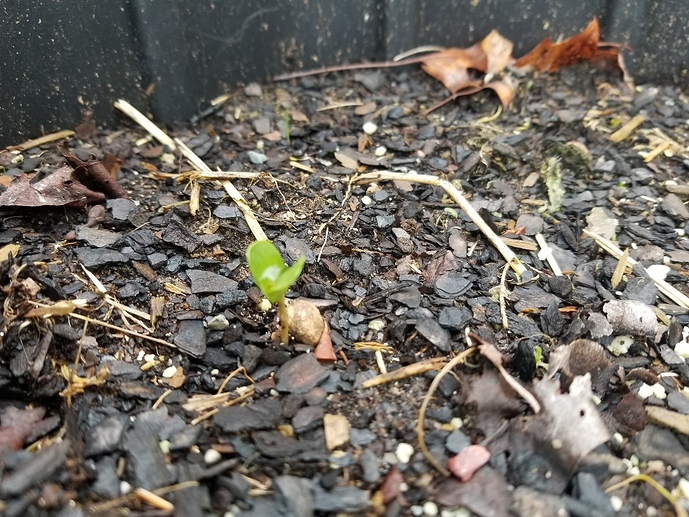 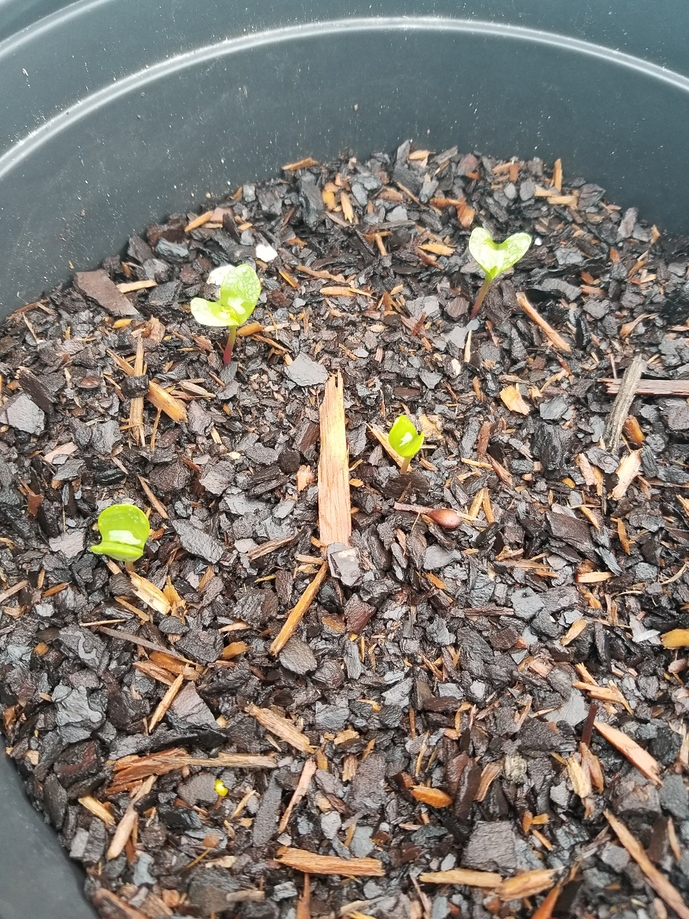 Well @Poncho65, you certainly have passed me by. I’m out of space and going with frankentrees, but I love what you are doing! For many of my friends and coworkers, starting trees is an idea they have never considered. For me, life without growing would be empty indeed.

I am trying for a few frankentrees as well

Thanks for the good feedback as well! I know several people with a fruit tree or 2 but that is about it with them… I do hope to have a good amount of fruit in the next several years. Don’t know what I will do with it all as it is just ideas in my head at the moment

I am taking this week off. I decided that I wanted to try and connect my orchard to the front field which will be the new front Orchard. They are both accessible y way of my driveway bit this seemed to be a good way to make them to seem more like one! My little girl and I went up toddy in the drizzling rain and I hacked a path through. You have to cross a small creek along the path as well but I am going to put a makeshift bridge that will cross it, it will likely just be a board on some brick 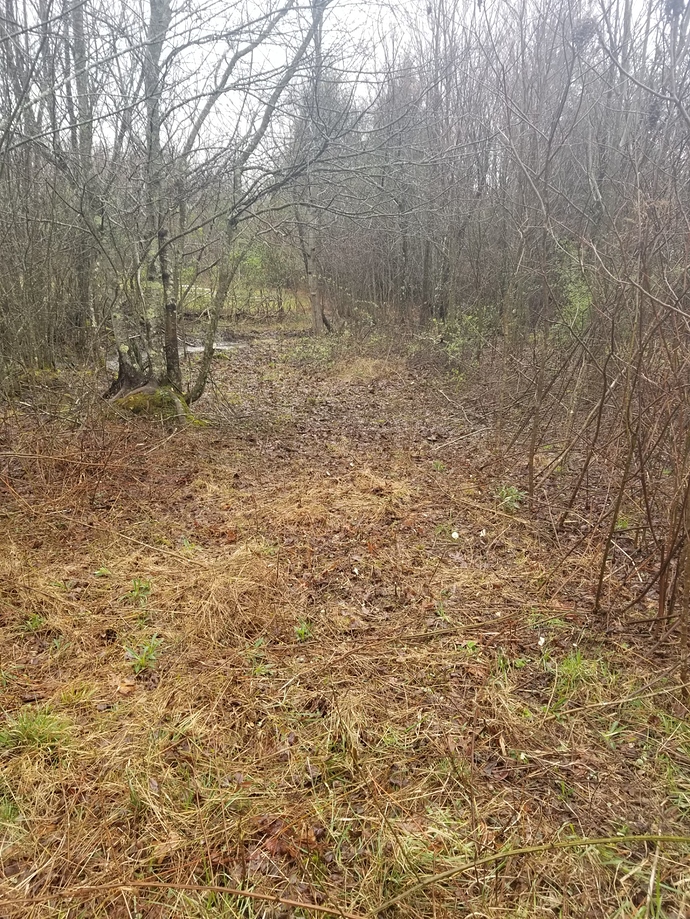 Later this evening I thought about making some sturdier metal tags to id my trees. I had some leftover coil stock from an addition that we did on the house a few years ago because I never throw anything like that away

it will make for much sturdier tags than the ones that I bought but I will use those until I run out. I took the combo square and used it as a guide to mark the lines with the utility blade knife. The width of the tag was made the same as the width of the ruler. After scoring them they break fairly easily. I will drill a hole in them and stamp the variety on them.and they should last many years 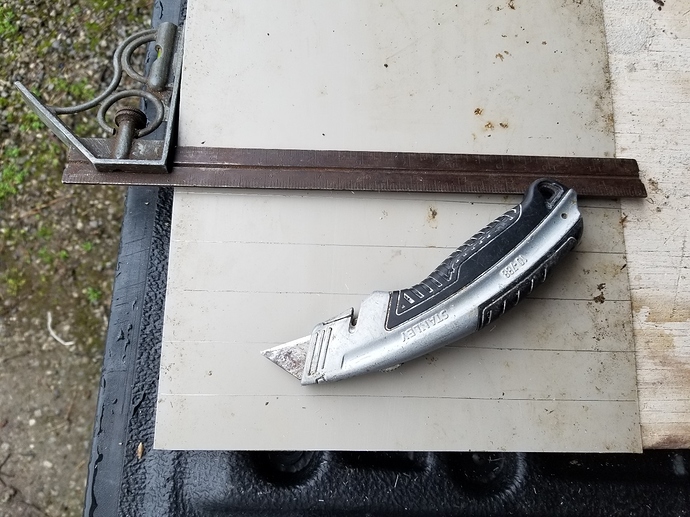 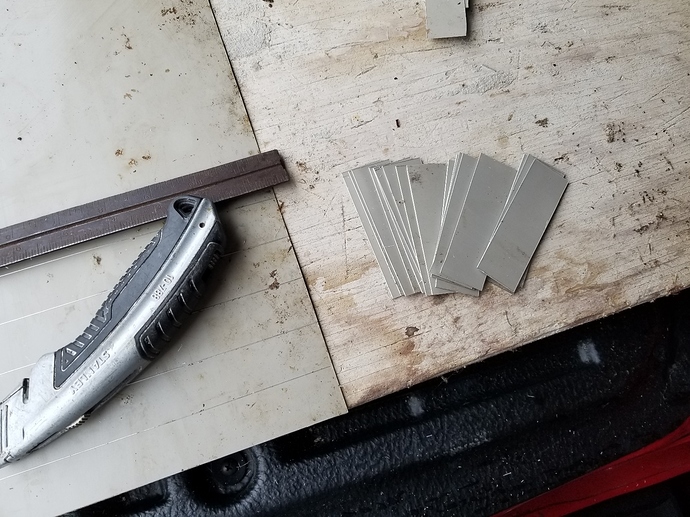 And here is an updated shot of my grafted trees in pots plus the few Key apple sprouts that I haven’t grafted and my 2 figs. 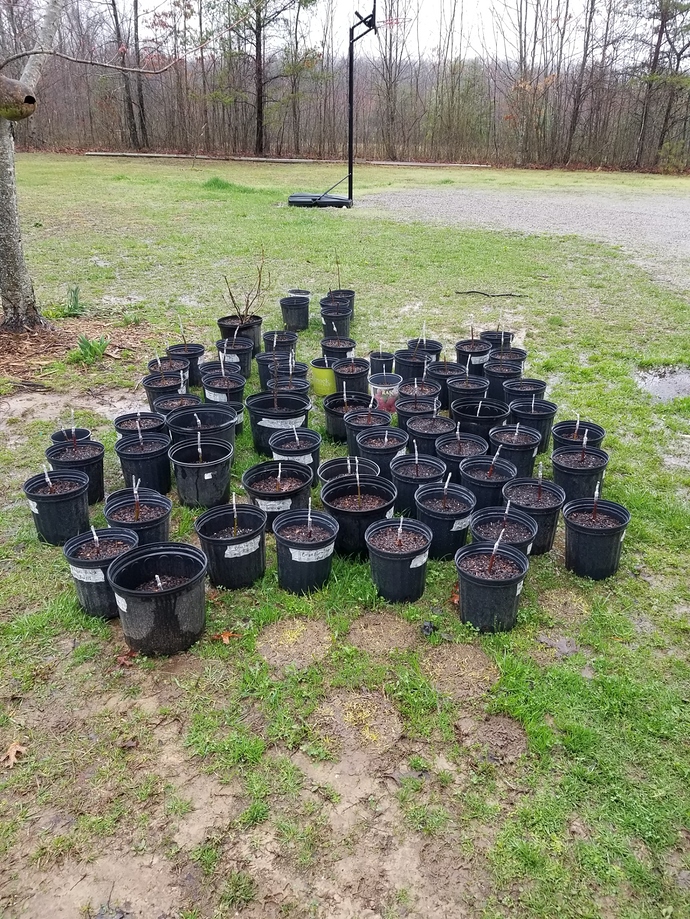 This space is what will connect my 2 orchards. A small bridge to be built across the creek. 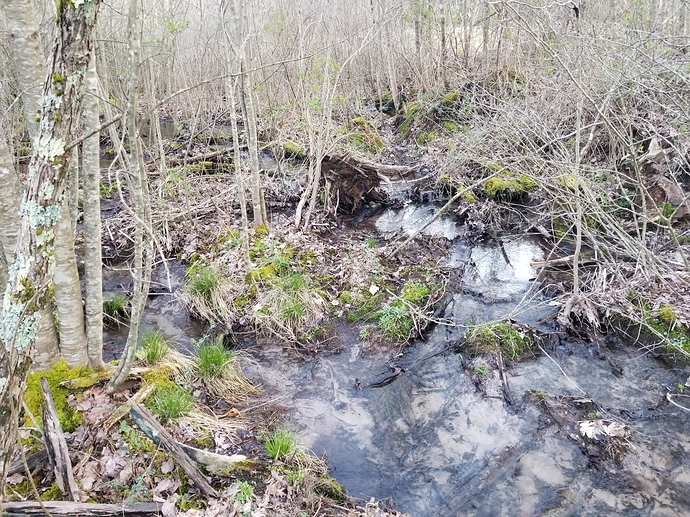 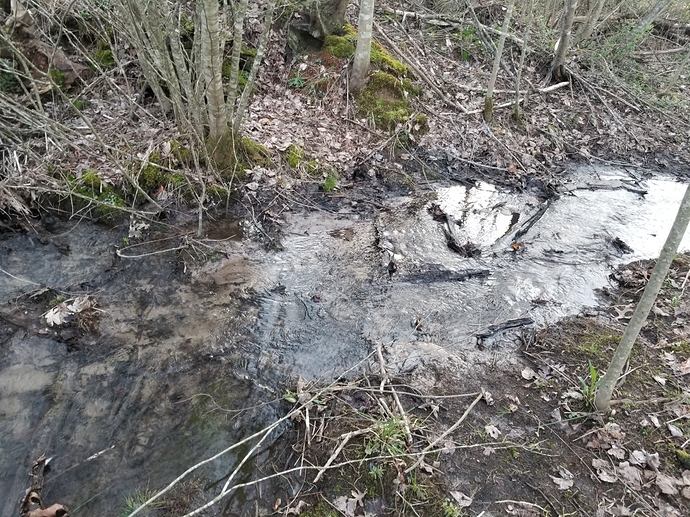 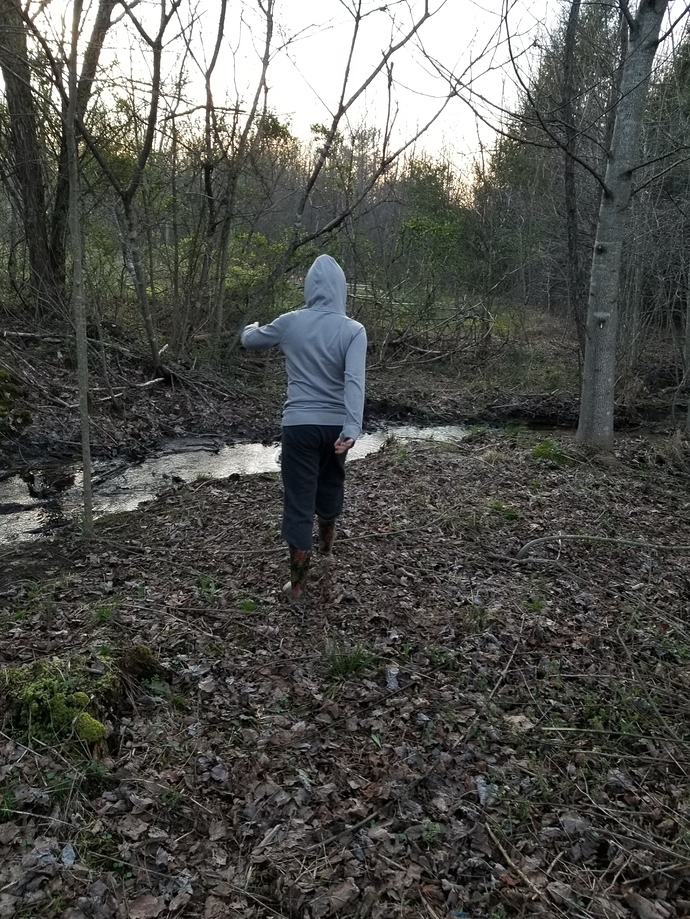 As you can see the other side of the creek only has a small opening now but I am planning on clearing it much wider right ahead of her as well.

Just imagine making a rock bridge there, while a incredibly time consuming project would be pretty perfect along that path!

**Yeah i think this spring all sorts of things that were impossible time wise for me may spring into action.

For now it will be simple but yes a rock bridge would be beautiful in that spot! Perhaps someday I will build that

I was wondering if you’ve checked the soil where you’re going to plant all those trees. Namely, getting a soil test done.

I say that because four years ago, I planted 11 apple and 2 peach trees in a plot that I had cleared of weeds and saplings. After seeing a few of my trees struggle to get going after a couple years, I thought I’d get some soil tests done. They revealed that the soil was acidic (pH = 5.0), and very low in important nutrients like Ca, Mg, P ad K. In other words, poor soil, not good for my trees.

If I had known the patch was so poor, I would have plowed it up, disked and tilled it, and then added fertilizer and lime to get the nutrient levels and pH up.

My other ‘orchard’ is below our barn, and the trees down there are doing much better than the ones up the hill. It’s probably because it was a pasture where horses, cows and pigs were, so it was naturally ‘fertilized’ for many years. Soil tests done there confirmed it with higher nute levels and pH. I’ve rarely had to add any additional fertilizer to those trees.

Some may say you don’t want really fertile soil as that may actually be a problem for fruit trees. But, as I’ve seen, good soil can make a big difference.

Only part of those trees will go up there. Some of them will go where I already have some apples. I haven’t tested the soil there either though. I am going by how dark the soil is up there in the front Orchard. It actually looks better than any of the soil that my other trees are in. I will still fertilize and probably lime the soil either way. The soil here isn’t very acidic but you never know. The pines growing up there are going to cause it to have some acidity so the lime will help balance that out

Thanks for the heads up though. I may yet get it tested but so far I haven’t… Still it will give me something to think about

I got mine tested thru our UK county office, only cost $3 per sample. But, you’d maybe have to take yours to a local UT office, and that’s if they even do soil tests. Of course, with a lot of colleges closed or closing up for a while, it may be difficult to get any testing done.

If your soil is darker, that may be a good sign, but I can’t say that it’s a sure thing. Our soil is pretty loose or porous, as in, doesn’t hold on to nutrients as well as someone who has denser or more clay-ey soil. We’re up on a slight hillside, and the farther up the hill you are, the worse the soil. That’s why I’ve really had to amend the garden plots we have up here. Down the hill, not as much is needed. If you’re in a flat or bottom land type of area, it’s probably decent soil already.

All my potted grafts and a few other trees in pots. Sure looks like a lot of work now 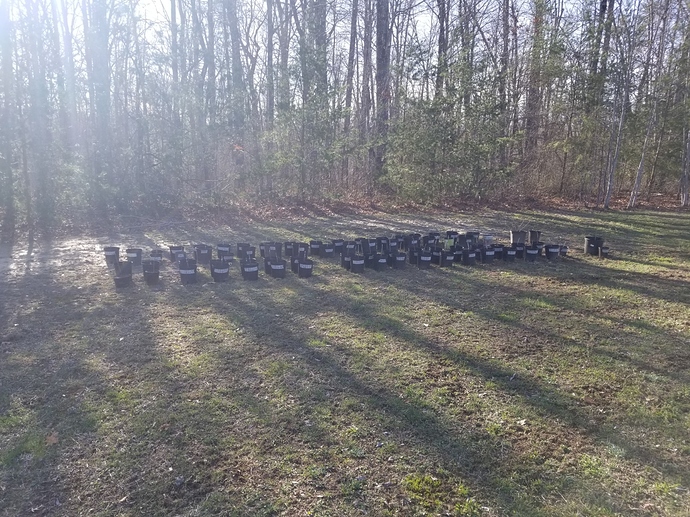 Lot of them are looking good and starting to bud out! Hoping that is a good sign for my grafting. I have them organized a little now. If I have 2 or more of a certain variety grafted they went together. Apples and pears are separated a little better as well. I have non grafted trees and my 2 figs there as well.

With all the grafting I have done this year I have made over 100 grafts! Once I got started I didn’t want to stop. For my first year I think I have done quite a bit

I am just hoping that most of what I have done will take. I am thinking that some of the first callery pear that I topworked may not have taken. It is my fault because I didn’t wrap the top grafts water tight enough before using the sealant… I think some of the other grafts on it will take but only time will tell for sure. I ended up making a frankentree this evening out of my Fuji which has never produced well for me and may not even be a Fuji (I got it at Lowes so who knows). I will post pics in another post and a list of what I put on it. I also topworked the bigger callery beside my driveway this evening and used the last of my pear scions on it. Thanks @Auburn for those. I will wait and graft to the rest of the callery next year probably. I have had a blast grafting and also thank @BlueBerry @greyphase and @markalbob for the apple scions! I bought several varieties as well.

I still have some apple scions left and will see what else I can do with them. I hate to waste any… I even grafted some scions to a few of my father-in-laws trees! I may try some bud grafting after reading up on it a bit more 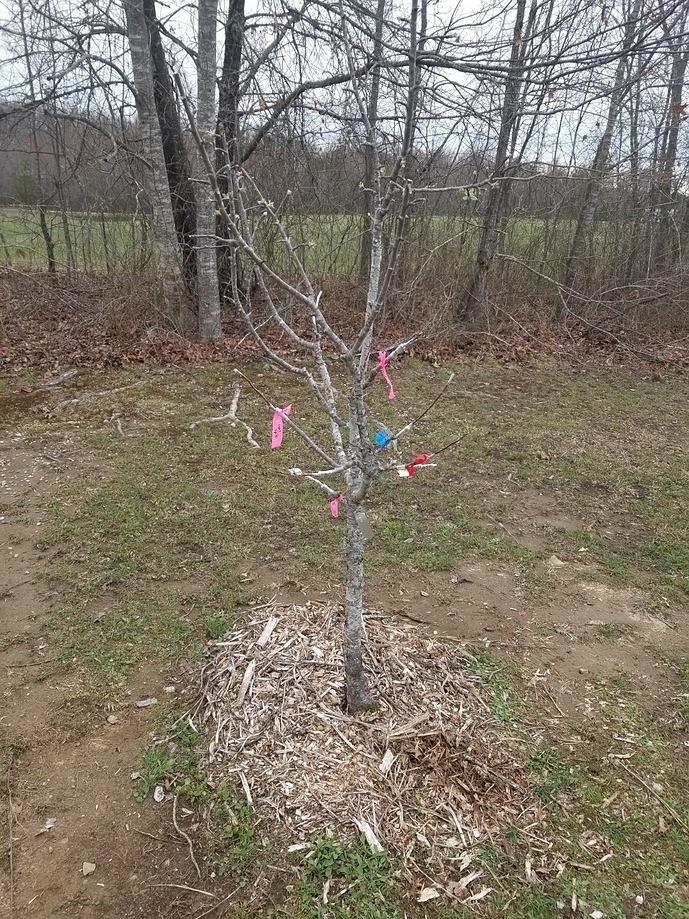 It is a Fuji apple supposedly. It came from Lowes so the variety is up in the air I guess

I do know these varieties that I added to it though! Goldrush, Redfield, Calville Blanc d’Hiver, Esopus Spitzenburg, Anoka, Monark, Blacktwig and Niedzwetzkyana.

Hopefully they take and this tree will take off and do better now with these varieties.