Can anyone help me to understand what is occurring with a peculiar situation where Two years ago I received a Giant Fuyu persimmon from a nursery. It lived through year and I felt it was very healthy by winter when it shed leaves as expected. But this spring 2019 it failed to bud out so I thought it was dead, but just in case I dug up the rootball and dead graft and stored it in a planter box where I kept it watered. Just recently I noticed so new green shoots just below the graft union; and some days later a completely new growth emerged about 6-8” away from the main rootstock. The new growth resembles the foliage of the Giant FUYU, rather than the American persimmon that I would have expected. Anyone have any ideas about what I am seeing? 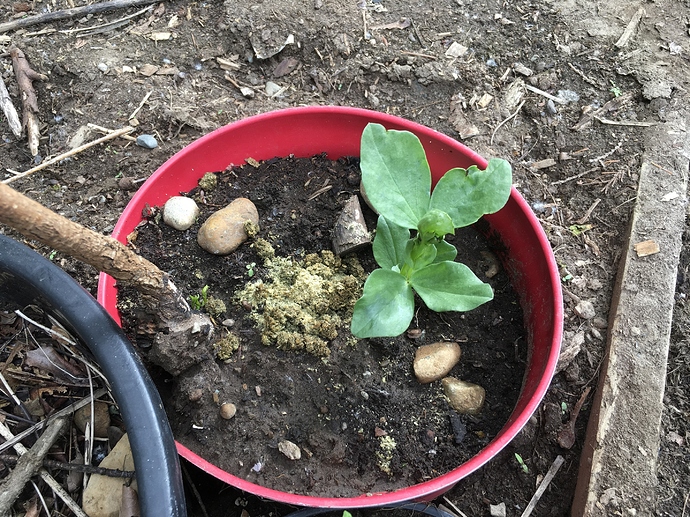 It does look like an Asian persimmon leaves so far. Give it another few more weeks for easy identification.

Are you sure the rootstock was American persimmon?

That is what Willis Nursery told me

Are you sure it is persimmon, it looks a lot like a broad bean from that angle.

By the way, Willis nursery is one of those nurseries that has more negative than positive reviews from customers. If you want to buy new persimmons, try England Orchard nursery or other places suggested in our Reference category.

I had American persimmon seedling appear at the base of my persimmon tree. This looks nothing like it. I tried to relocate it and killed it.

Bingo,
You guessed correctly! I planted fava bean seed that must have dropped into the container as I planted them in a nearby row! It’s identical to my row of fava beans.

Dennis,
Credit goes to @Katie_didnt_Z4b., not me.

I thought it was weed