I have a Fantasia nectarine tree that’s gotten very large. So far I’ve been pruning it standard vase shape and thinning and it’s working out well. However, it’s starting to get too tall. If I chop the tops off though, this is where most of the fruiting wood is? I also don’t want to cut back to the main branches, as I did this with a peach tree and it never recovered.

can you cut back to somewhere that still has 1-year wood and leave a 3-6 inch 1-year stub? those would then be good regrowth points

Can you show me a picture? I’m having a hard time accurately knowing what you mean.

If you have 3-4 main stems, you could cut one back every year and lower the height gradually while still getting fruit continuously.

Wouldn’t that kill off the main trunk you cut back?

I ended up cutting about 2/3 the tree away. Some of the branches were four or 5 inches thick. So far it’s been a good tree and responded well to heavy pruning, so I’m hoping for the best. At least most of the tree is reachable without a ladder now. 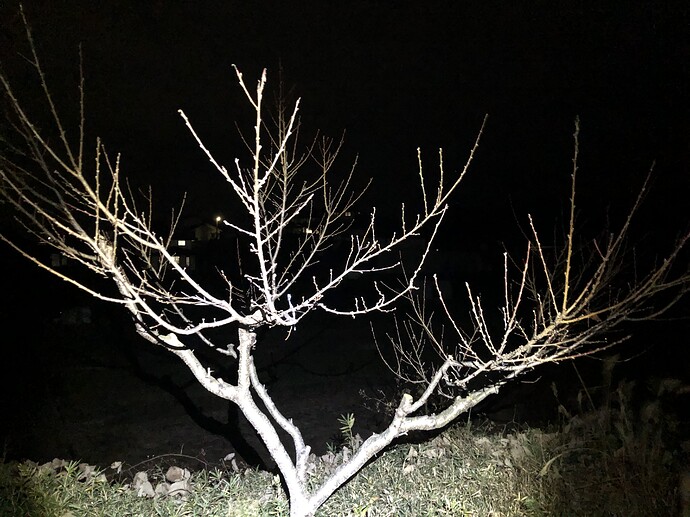 yeah all I meant was, in response to your having killed a tree by cutting back too far, leaving new stubs is a defense against that. peaches are pretty bad at epicormic-type growth. so you can cut back to the highest point you still have newish wood. your picture looks good

I agree with z0r. Leaving stub cuts from year old wood will help renew the tree. That’s about all you can do at this point.

Of course it’s too late now, but I’ll mention it’s always better to train the tree earlier if you have time. That way you don’t have to resort to extremely aggressive pruning.
We prune very aggressively multiple times every year to avoid peach/nectarine trees getting too far ahead of us (too tall or too thick).

Older trees calm down a bit, as do trees with a heavy crop load, so they don’t have to be pruned quite as hard. But you still have to be careful not to let them get too tall.

The point is that you want to try to avoid having to prune two year old wood if possible, by aggressively pruning one year old wood which is too tall. Hope that makes sense?

Here are some of our pruning pics I posted on old threads.

Here is a before and after pic on a very vigorous young peach tree. Notice how tall the wood got in one season, and how I ruthlessly hacked it back, without getting into much two year old wood. At this point in peach tree’s life, we don’t care about getting peaches off the tree. All we care about is shaping the future of a tree. Sort of like how one raises children. Think of your tree as your young child. No parent expects anything productive from their young child, all they are thinking about is shaping them so that their child has a productive and meaningful life in the future.

For anyone interested in how we prune, I was out in the backyard and pruned a couple trees. Here’s a before and after pic of the tree pictured above. I let it get too tall this summer, so had to take quite a bit off. It probably would have had about 100 flower buds on it. I cut just about all them off. Now it only has enough wood to raise about 8 peaches. It’s a sacrifice made to build a good tree. Here’s another before pic: [KIMG2085] Here is the after: [KIMG2089] The tree will put…

Here is an older tree I pruned aggressively after a season of heavy growth. Imagine if I had skipped a year of aggressive pruning. The tree would be unmanageable and require even more severe pruning to try to bring it back down. That’s the point to remember. If your peach/nect tree is a vigorous grower, you can’t even miss one season of pruning, otherwise it multiplies your problem. Generally with vigorous peach/nect trees you will have to aggressively prune at least twice a year. Again, if you miss a year of aggressive pruning, you’re sort of sunk and back in the boat of trying to get the tree down by cutting into old wood. Renewal pruning can be done, but as you can attest it is much more difficult than simply keeping the tree from getting too tall. If the peach tree is vigorous, it’s almost impossible to overprune year old wood on a peach tree.

This is obviously an old thread, but since I was pruning today I thought I’d show something perhaps interesting. In post 17 above I showed a pic of a tree I had severely pruned this spring (not the second pic in post 38, but the first pic, post 17). I had quite a few trees like the one in 17, trees which hardly had any fruit, and were pruned to remove any shoots which were blank. I’ve been doing fall pruning for a couple weeks now and noticed a lot of the trees are unrecognizable from the but…

Here is a video I posted on the forum of me pruning a peach tree. Note that the tree was pruned extensively during the season prior. In other words, the tree was already pruned in the growing season and the fall prior to the spring pruning.

If interested, here is a video of some spring pruning I did last March. I’ve intended to post it on the forum before, but never got around to it. It’s not as good as the videos from NCSU (Mike Parker) but perhaps you can glean something from it. I made it for customers whom I sold trees to. [peach pruning video]

Here is another couple pics regarding pruning.

Lot’s of good comments here. I used to prune “when the knife was sharp”. We still do some, for labor cosidrrations. But it’s best to prune peaches in warmer weather during the growing season. Here’s a peach tree we pruned a few days ago. [04] Here’s one we pruned back to nothing a month ago. [21] We go through and rip out those upright shoots about this time. We don’t head them, we rip them out. The caveat is that if it’s varieties which tend to produce a lot of blind wood, like Earlys…