New tree advice - cherry and something else

A couple of questions…

I’m in northern Utah, Zone 5b with a frost free season of May 15-Oct 15. Hot dry summer but often cool nights so ripening takes longer. Irrigation isn’t an issue. Pests are manageable.

Ideas among this list:
TBD Apricot - A good early fruit, but my apricots often (a) get hit by spring freezes or (b) trunk split just above ground (even though I wrap them in white gauze). Maybe an aprium? I don’t know if my flavor delight will survive - it didn’t grow much this summer and lost its leaves early.
Indian Free Peach - Is it that much different than other peaches?
TBD Apple - I love honeycrisp and am thinking about Kindercrisp (though it’s hard to find). Others to think about in the same crunchy sweet vein?
Another Pluot or Pluerry - Dapple dandy? Flavor punch?

Anything else to think about?

Multi grafted trees sound great in theory. The issue is many of the ones with the best tasting ones are often times sold out. Another issue is they often times don’t let you choose the variety at nurseries. A good example is fast growing trees sells a multi grafted pear with Anjou, Flemish beauty, Bartlett, kefir, Moonglow and I forget the other variety. Thing is they only give you 3-5 of the varieties and don’t allow you to pick. A option with that is I know raintree offers a custom graft of up to 12 varieties. Downside is I think you need to buy and send the scion to them. I would say the final issue is that they have a tendency to grow into 1 variety. You have to kind of know which variety is the most vigorous since you plant it a certain way so it does not overtake the other grafts. Then you need to prune the grafts so they do not take over. Then again pruning should be part of your routine anyway. Indian Free peach is going to be your latest ripening variety. I had a thread where people did not think it would ripen in my zone 5 weather. You can look up Indian free on the search tab for that. Stark Bros has started selling honey crisp hybrids from what I heard. You will need two apples to pollinate each other anyway. Stark Bros has a habit of getting patented varieties that are amazing varieties like the stark donut peach was created by them.

No need to buy a multi-grafted tree. Make one yourself. My yard is not that big and I don’t need 150 of one variety. It would be better to have 35 of 4 varieties on each tree. This photo is from the 2020 season. It has six cultivars. All fruited this season. It was amazing! All my trees are like this. The only way I can grow 19 different plums. You ever need scion I’m right here. 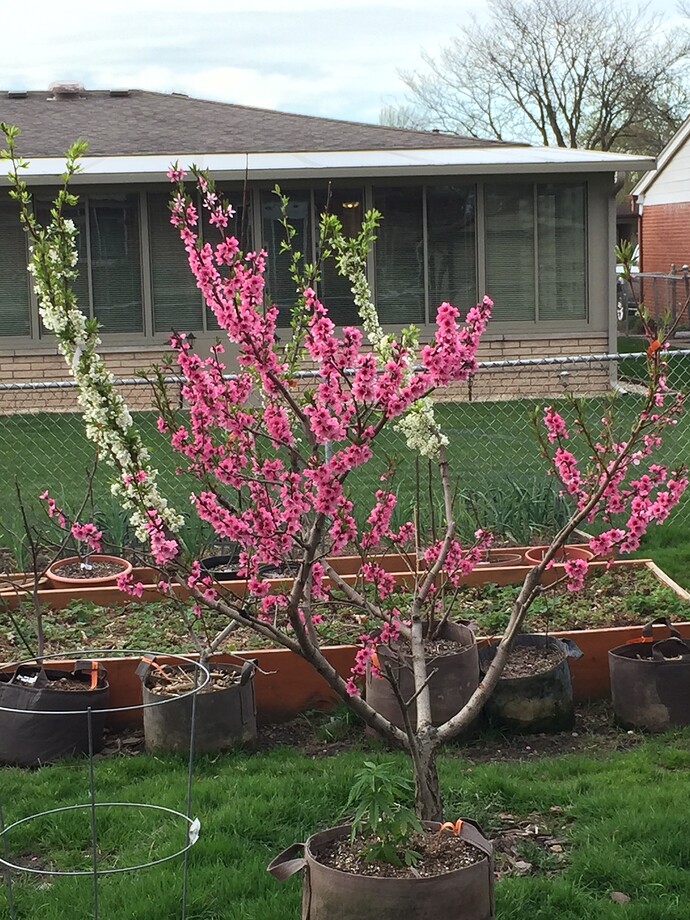 I have Indian free if you ever want to try it. The tree in this photo is Indian free. And you’re not growing Utah Giant sweet cherry? I have wood.